We’ll be working on a review for Cthulhu Saves Christmas, so I got in touch with Bill over at Zeboyd Games to talk a bit about the game’s journey to consoles. Come check it out!

PS4Blog: Hi, Bill! Good to have you back with us. How are you doing today?

Going okay, but super busy! Launching our latest game, Cthulhu Saves Christmas, on the Nintendo Switch eShop is always fun but busy. We are also going to release it on the PSN! But the coolest thing is that Robert and I have been working with Limited Run Games to produce physical copies for the Nintendo Switch and PlayStation 5. So I’ve been super busy working on the game cart and disc labels, the game manuals, and cover art for each, along with answering stuff about the game’s Switch release and trying to get the word out there. 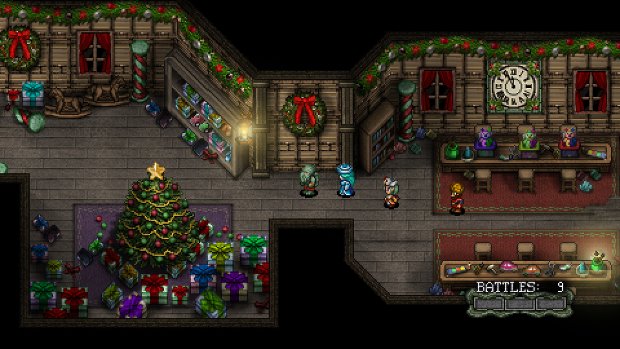 PS4B: On that note, Cthulhu Saves Christmas is now ready to go on Nintendo Switch! What can you tell us about this game?

We always wanted to do another game featuring our crazy version of Cthulhu. He always really resonated with people, but we didn’t want to just straight port the original game – Cthulhu Saves the World. We brainstormed a few ideas, including Cthulhu Saves the Galaxy and Cthulhu Saves the Games, but after having just released our fairly ambitious Cosmic Star Heroine, we wanted a break from doing more sci-fi releases. It so happened that as we came up with the idea, it was during the end-of-year holiday season, when all the really campy Christmas movies are playing on TV/streaming.

So we thought, wouldn’t it be funny and ridiculous to set Cthulhu loose in a setting where he would be pitted against some of the bizarre (and often frightening) holiday myths from all over the world? The ideas just flowed from there. We tried to incorporate frightening tales such as the cannibalistic Gryla, but we also had fun making silly versions of some characters. My favorite is Baba Yaga, who is traditionally pictured as a horrible old hag who lives in a chicken-legged hut and wields a mortar and pestle. Since we already had an “old man” in the character party designed (Belsnickel), I thought it would be hilarious to make Baba Yaga a silly and mischievous young character.

The game design itself sprang from a couple of core ideas we wanted to do. For one, we wanted to keep the scope down and remix some of the gameplay concepts from Cosmic Star Heroine. So we kept the basic Hyper Mode and a few other systems. To mix it up, we incorporated a version of the Insanity ailment system from Cthulhu Saves Christmas, where certain abilities turn enemies Insane, which affects their vulnerability to certain attacks but also makes them more dangerous (it also gives the sprites a new “insane” looking version!). 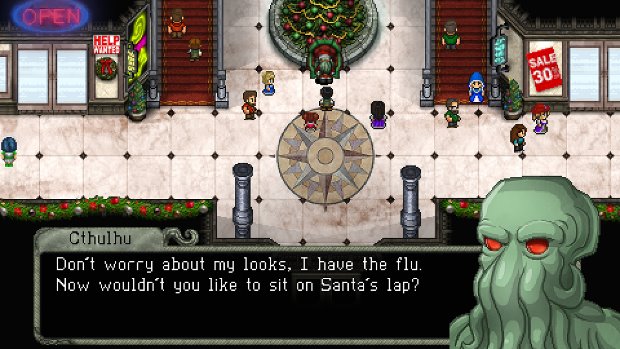 But something we’d been really wanting to do in our games for a while is create a sort of simple, streamlined “relationship” system between characters. We wanted to give players something they had nonlinear choice over, where they could develop the characters and relationships between them. It also makes for a lot of fun instances for whacky dialogue and story events! And as a kicker and to give these events a game element, we include an item or weapon as a reward (which you can see before choosing the event). By doing all this, we wanted to make battles just as interesting as Cosmic Star Heroine and also providing a “breather” between dungeons to keep people interested. I think it works pretty well!

I just wanted to add that while it’s a Christmas-themed game, it also contains lots of horror themes/characters/settings, so while it’s silly and lighthearted in nature, it still involves eldritch monsters and frightening lairs, which also make it a pretty good Halloween game. It’s two holiday-themed experiences in one! 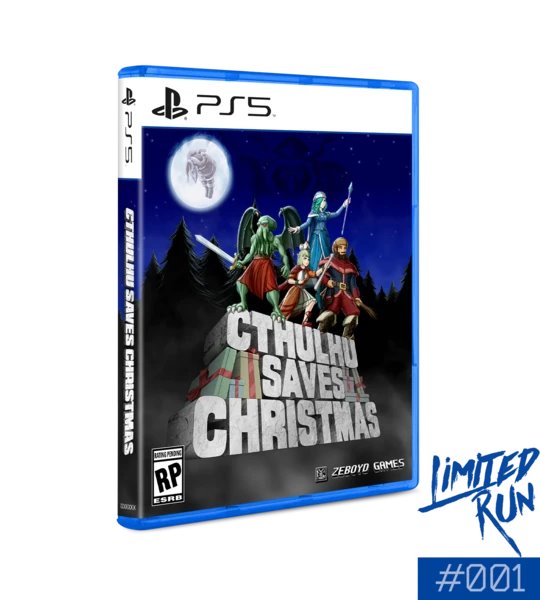 Cosmic Star Heroine was our biggest game ever, and it was heavily inspired by a lot of the games that came out during Working Designs’ heyday. Because of that, we and Limited Run Games were super motivated to produce a physical version for PS4 that would do its inspiration justice. For Cthulhu Saves Christmas, the game itself is a lot more modest in terms of scope, and it’s also a holiday-themed game and kind of silly.

So for the Cthulhu Saves Christmas physical run, we’re planning to make a more modest physical product with Limited Run Games – a nice double-sided case insert – box art on one side, character art on the interior -, and a nice full colorful manual in the 20-page range. The coolest thing is that Cthulhu Saves Christmas will be Limited Run Games’ first PlayStation 5 release, so it will bear the #001 numeral for their PS5 series on the spine and the back. That’s pretty cool, but I think a lot of people will find it funny that a crazy indie RPG will be released physically for the PS5 so early in its life cycle. That said, I think a lot of people will also opt for the Nintendo Switch version because this type of game lends itself well to portable play and short bursts, and the presentation is crisp and clean in Portable Mde. 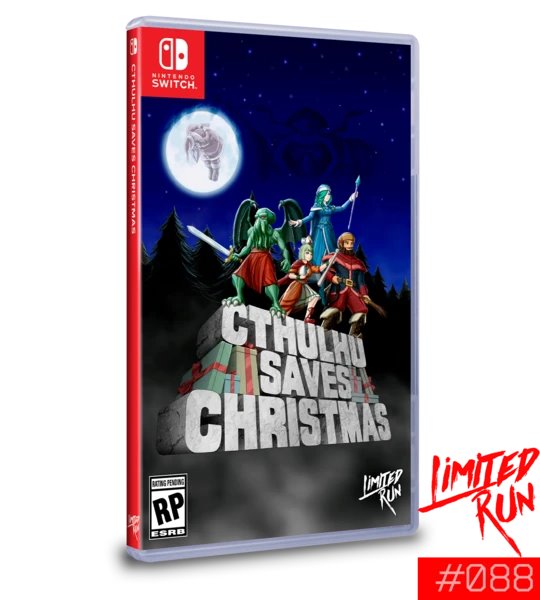 PS4B: Is there a chance we might see Cthulhu doing something such as, say, saving the world on Nintendo or Sony’s console?

Hahaha, we get that question sometimes. We’re very proud of all the games we’ve made. But we’ve also improved in a lot of ways, and it’s hard to go back to our first or second game we made as a team and re-release it as-is/straight port it. We’d be putting out a new release (of our old game), and it clashes a lot with what we do these days. Robert and I talk about it some, it might be best that if we were to ever revisit Cthulhu Saves the World or Breath of Death VII, we would opt to remake it so that we keep the gameplay/story and feel of the original games but just smooth over some of the rough edges and bring the presentation up to where we are now. But right now we have no plans for that at the moment! 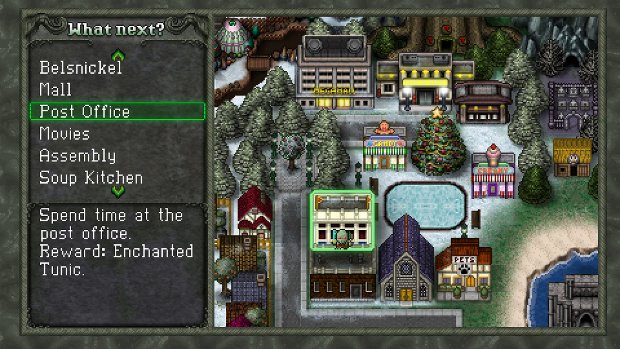 Yea! I just wanted to add that Josh Queen created an awesome soundtrack for this game! It has a sort of dark/foreboding feel combined with a Christmasy edge. But of course, the town/relationship building music is light and perky. He did an incredible job!

I also wanted to say that Limited Run Games have been awesome to work with for porting this to the Nintendo Switch and PlayStation 5 and in getting the physical versions ready. Joe Modzeleski from Limited Run Games has done an incredible job taking our game and porting it to the Nintendo Switch, especially in a fairly tight timeline. He’s our Switch hero! 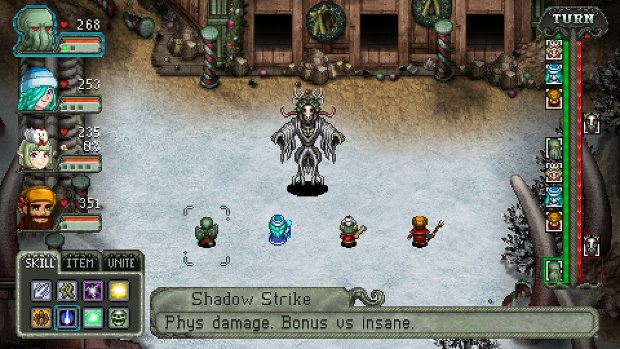