Jump on the toilet and go for a ride through the sky! Wait… what? Learn more about this one in our Rainbows, Toilets & Unicorns review!


Rainbows, Toilets & Unicorns is a fast-paced shoot ’em up / bullet hell into the crazy world of unicorns!
Fed up with the world and exhausted by the hot weather you resort to your last hope: your favorite unicorn flavored ice cream. All of a sudden, you are struck by the urge to visit a bathroom, and the only option to avoid pooping yourself is the chemical toilet down the street. Thus began a bad trip in which you will have to face your greatest fears in a fight to the last splash.

Rainbows, Toilets & Unicorns is a fast-paced shoot ’em up / bullet hell! The player will have to progress through enemies waves and beat the 15 bosses in the game. There are 5 different and completely crazy worlds! As any good shoot’em up of course the player can also use a special power, the Rainbow splash! Collecting coins makes the shot more and more powerful!

On your trip into the crazy world of unicorns you can vent your unjustified frustration and face all your most unfounded fears!

Rainbows, Toilets & Unicorns is a bullet hell shoot ’em up on the Nintendo Switch. The genre has generally been more focused on space ships, wherein the game you ride a Unicorn, and it’s more of a satirical jaunt through politics, religion, and pop culture. First off, Rainbows, Toilets & Unicorns is hard. It’s a bullet hell game, which means there are enemy attacks flying all around you, but you only have one life, and you need to make it through all five levels without dying to proceed. Honestly, I found it to be one of the more challenging shoot ’em ups I’ve ever played! 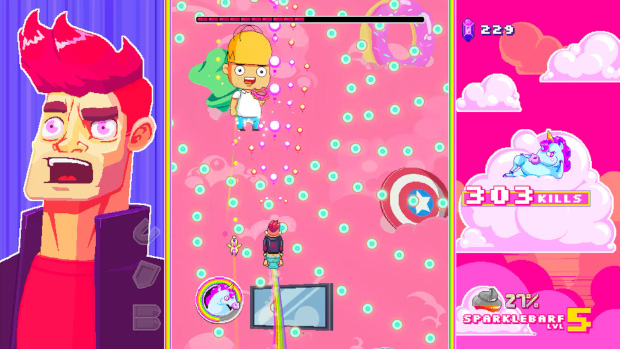 As with most shoot ’em up, the control scheme is simple, so you’ll move around the screen, shoot with one button, and you have one power-up move that you can charge and use to wipe all of the enemies off the screen. Not too much in terms of depth to it, but that way, you can focus on the action on the screen.

The game really does a satirical deep dive on pop culture, politics, and religion. Each of the worlds is themed after one, and the enemies and bosses completely reflect that when playing. For instance, in the politics-based levels, some of the enemies are the Democratic and Republican national mascots, and a boss could be a certain sentient hairpiece. When in the social influencer levels, you’ll be battling likes and other related matters. I actually don’t want to get too in-depth on the enemies, as I felt they were the big surprises in the game, and I would hate to spoil all the fun for other players. 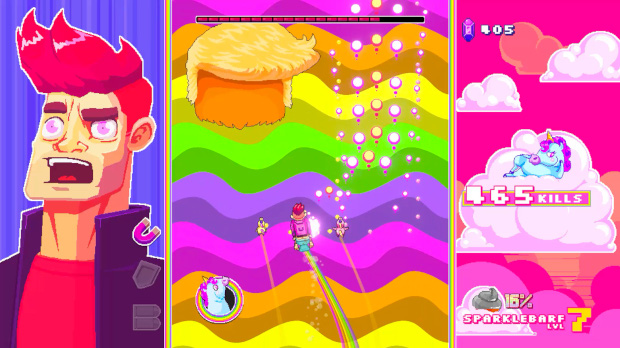 I think my biggest issue with Rainbows, Toilets & Unicorns is the fact that each level feels like a reskin of the others. While the enemies visually differ from each other, they all kind of feel the same, until you get to the boss fights which feel give some extra variety. You can power up your unicorn as you fight by collecting crystals, which make it more powerful. As you progress, you’ll make quick work of the cannon fodder with only the bosses giving you a proper challenge. You’ll lose those power-ups when you die or beat the level and move on to the next one, so the challenge is just getting powerful enough to plow through the enemies and get to the bosses. 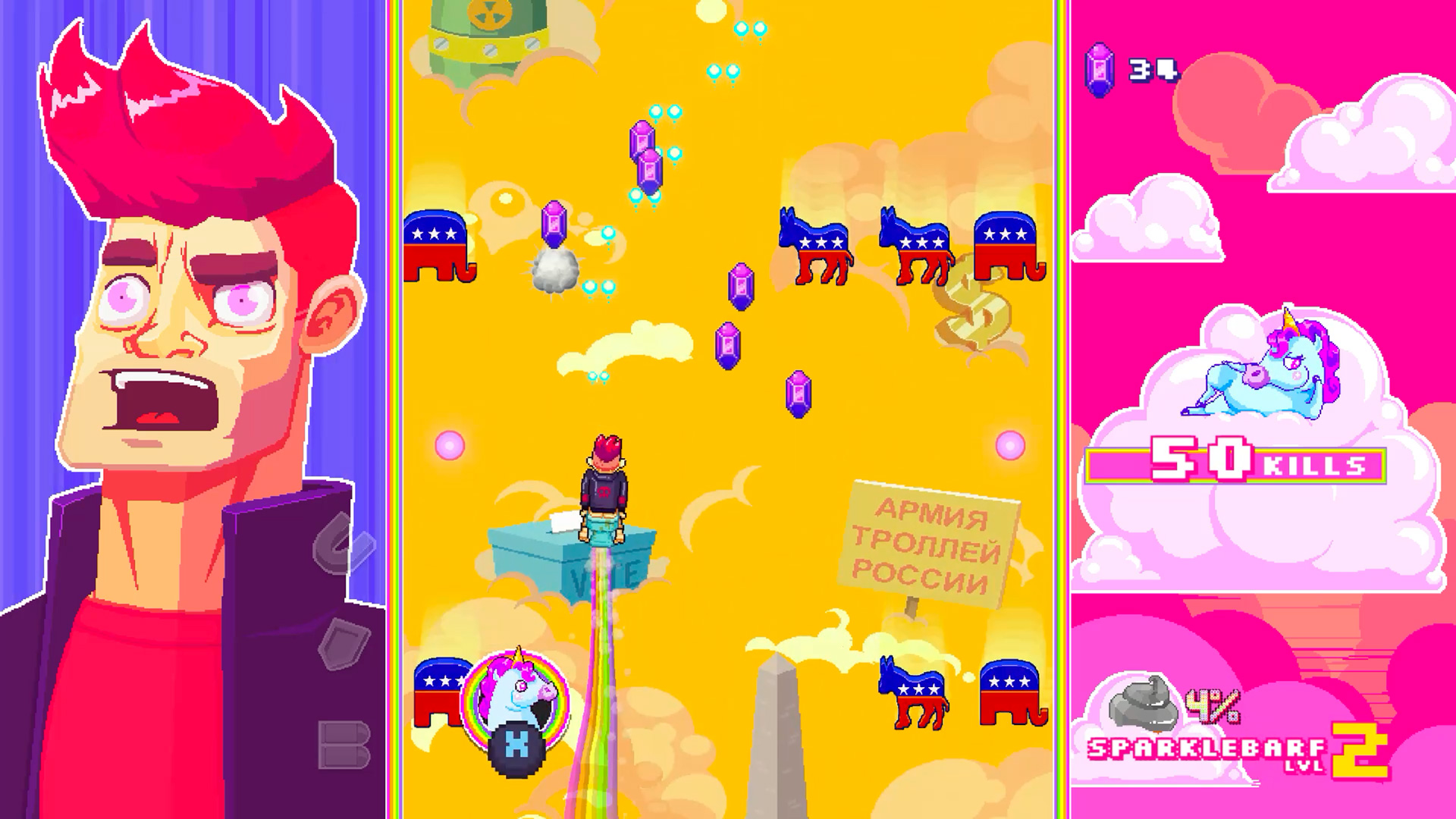 Aesthetically the Rainbows, Toilets & Unicorns is a very bright and colorful game as you would imagine a game about riding a unicorn and taking on sorts of hot topics would be. I loved the art style of the game and would like the team to tackle another genre with the same aesthetic. 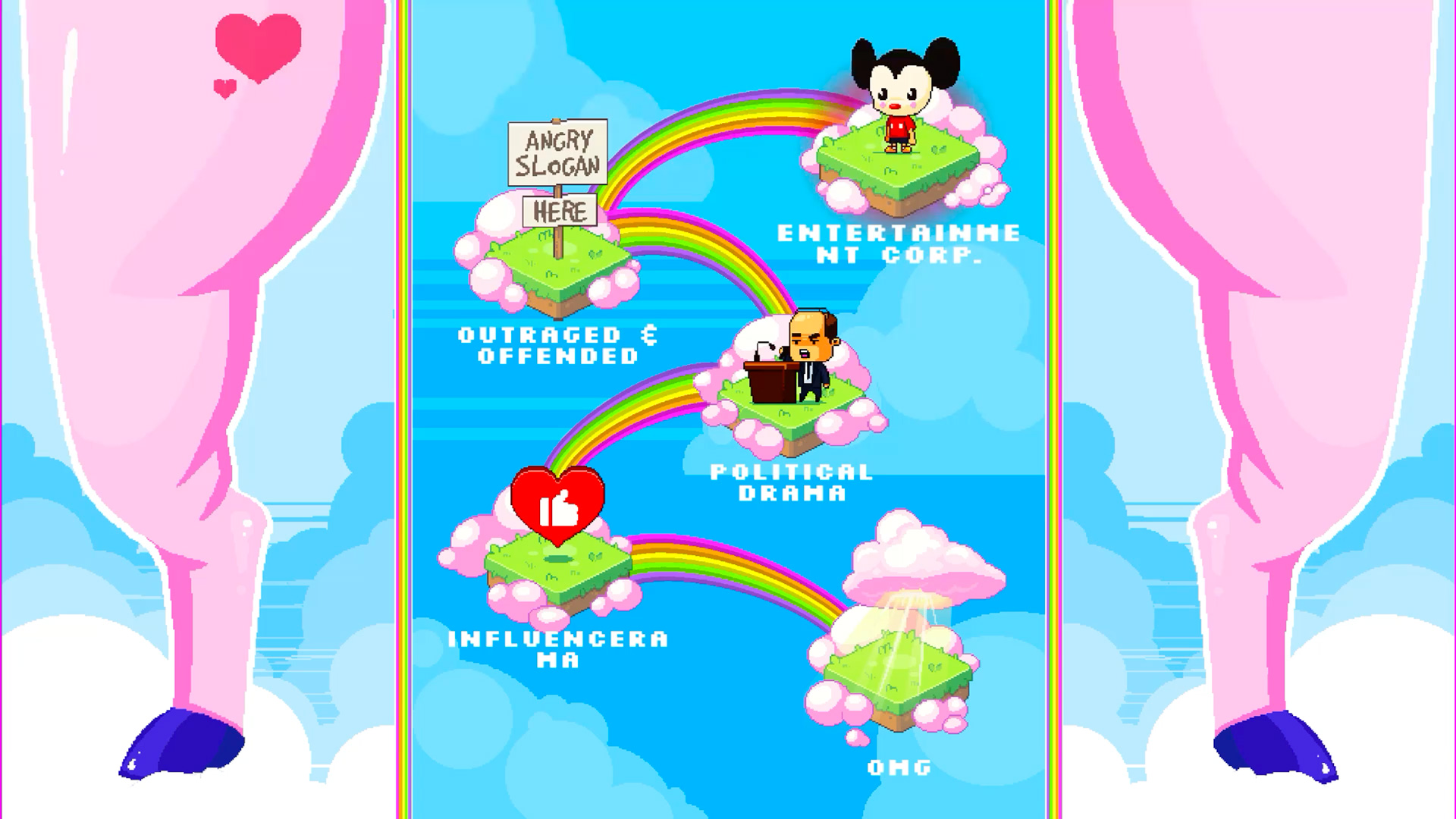 I had fun with Rainbows, Toilets & Unicorns, but it’s high difficulty curve kept me from enjoying it too much. It starts off really difficult and gets easier, but getting to easier parts takes a lot of work. I personally love the satirical theme of the game, but that may not appeal to other gamers. If you like shoot ’em ups, this is one to check out as it feels so different from other available games in the genre.

Disclaimer
This Rainbows, Toilets & Unicorns review is based on a Nintendo Switch copy provided by Fantastico Studio.

PAW Patrol: Mighty Pups Save Adventure Bay Out This November