pixelBOT EXTREME! from FusionPlay is a fun 2D autorun color-based shooter on PlayStation 4 in which you will be controlling the titular pixelBOT as you try to complete all 25 handcrafted stages to show your creator how you’re the best at whatever it is that you were created to do. You will need to escape from the Forbidden Factory, but that’s about all the backstory you’re going to get for this one. The game goes for an old-school infused 16-bits look, sound, and feel, which is easy to see in the game’s trailer and screens. 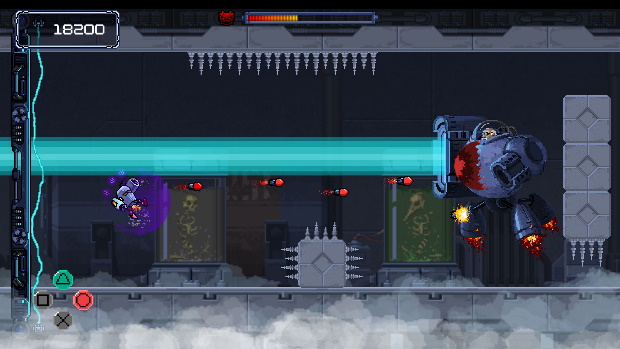 You can play the game’s Story Mode on your own, or you can bring a friend along for the ride in the game’s local Co-Op Mode. Once you finish the game, you will also unlock an extra Speedrun Mode that will test your skills in full. pixelBOT EXTREME! can be played in three difficulty settings. For Easy, you will be invulnerable after being hit, there will be no gravity, and bosses will be a bit easier. Normal is the standard experience. For Hard, you get no shields from shield orbs, will only have a single shield for boss stages, and bosses will also be harder.


Since pixelBOT EXTREME! is a 2D autorunner, which means that as soon as you start a stage, pixelBOT will run forward automatically. You can slide by pressing down on the D-Pad or the left analog stick and fly by pressing up. You will shoot with the Square, Triangle, Circle, and X buttons. At first, you will only have one color of missiles, but as you progress, you will need to use the missiles that match the colors of the enemies you will face – colors that correspond to the color of each of the aforementioned buttons. 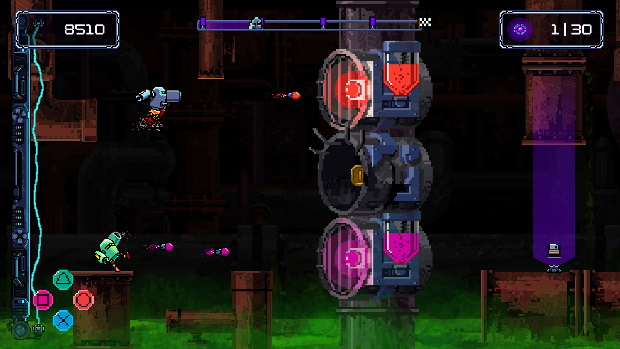 For each stage, you will get to collect shield orbs, which will protect you from damage, as well as the different letters of the word pixelBOT. If you’re the type of player that likes to 100% a game, then you will need to play each stage more than once, so that you can collect all shield orbs as well as all letters, since you won’t be able to complete both objectives in a single run. And then, there are the boss stages. These will require s bit of trial and error on your end so that you can learn their movement and attack patterns so that you can find the right way of defeating them.


Shield orbs are important since you’ll need to collect at least up to a specific amount to be able to progress through the game to unlock new stages. As for collecting the letters in pixelBOT, doing so will unlock extreme versions of each of the stages, which dial up the overall difficulty. When you die, which will happen a lot, you will quickly respawn at the last checkpoint you reached for the stage. Thanks to this, you won’t have to repeat the whole stage when you die and can focus on each new section on its own until you get the timing right. 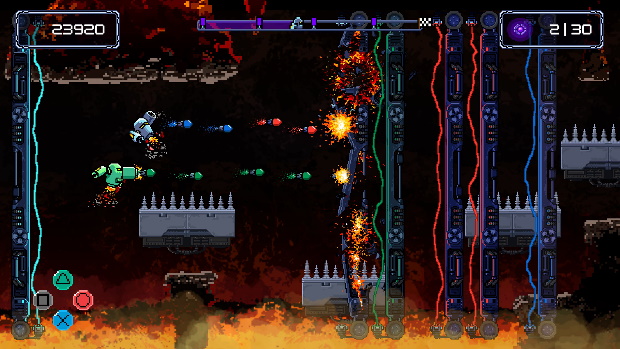 Trophy-wise, this indie release does not have a full trophy list with a Platinum trophy. The list is split into nine Bronze trophies, three Silver trophies, and a lone Gold trophy. You will unlock the trophies and add them to your collection from completing objectives such as defeating your first enemy, completing a stage without being hit, defeating a boss, gaining access to all colored missile types, and for destroying 2,000 enemies, to name some examples. Can you 100% this trophy list? 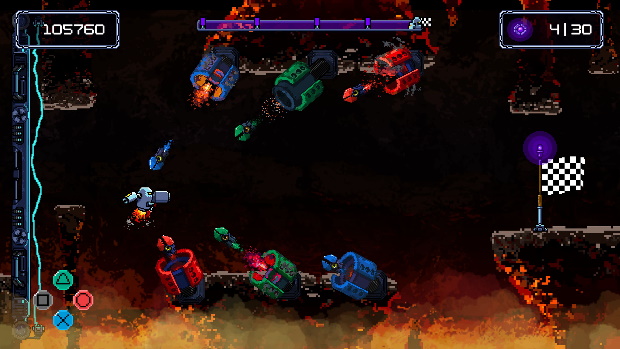 pixelBOT EXTREME! is a fun, 16-bits styled and old-school infused 2D autorun color-based shooter with a good difficulty curve and more than enough content to keep you busy for a few hours. If you want to 100% the game, you will certainly be adding some extra time on top of that. pixelBOT EXTREME! is out now on PlayStation 4 with a $9.99 asking price.

Disclaimer
This pixelBOT EXTREME! review is based on a PlayStation 4 copy provided by FusionPlay.

Umihara Kawase BaZooKa! Out Next Week