Rise and Shine is out today for PlayStation 4, so we got in touch with Super Awesome Hyper Dimensional Mega Team to talk about the game’s development and its release for Sony’s home console.

PS4Blog: Good morning! Good to have you with us at PS4blog.net. Would you mind introducing yourself to our readers?

My name is Enrique Corts, I’m from Spain, and I’m mainly one of the two artists at Super Awesome Hyper Dimensional Mega Team, although I wish I could only be in charge of the art! Being part of a tiny team of four, I usually have to deal with different things like animation, design, production, PR, etc.

I’ve been working in the games industry for about 17 years now as concept artist or art director, but only 7 of those as an indie developer.

In the past I’ve worked on projects like the original Plants VS Zombies or Worms 3D and as a team we have developed Pro Zombie Soccer and Supermagical (both among the Games of the Year on the App Store) before Rise & Shine.


PS4B: Rise and Shine is now on PlayStation 4 for all to enjoy. How would you describe the game to someone who has never heard about it? What makes this game special?

We always try to make something fresh with every game we make, and Rise & Shine was no exception. We took the 2D ‘run & gun’ sidescroller genre and added some gameplay mechanics you have not seen before on a game like this. Although you’ll surely run and gun a lot, this is not about shooting mindlessly to the enemy hordes. We introduced some skill puzzles in your way, so maybe a ‘think & gun’ would be a genre name best suited to what you’ll find here.

Also, you’ll have to recharge your super-powerful gun, so every shot counts. There’s a cover system that works really well, a story, completely different challenges you’ll find in your way, hand drawn non-repeating backgrounds…etc. So yeah, you’ll notice this is something very different to another Metal Slug clone. The pace here is very different, so I think this is more on the line with games like Another World or Inside, actually.
Oh, also for every person out there who likes to spot Easter Eggs and hidden references, they’ll have a blast with Rise & Shine, as the game is our honest love letter to classic videogames. 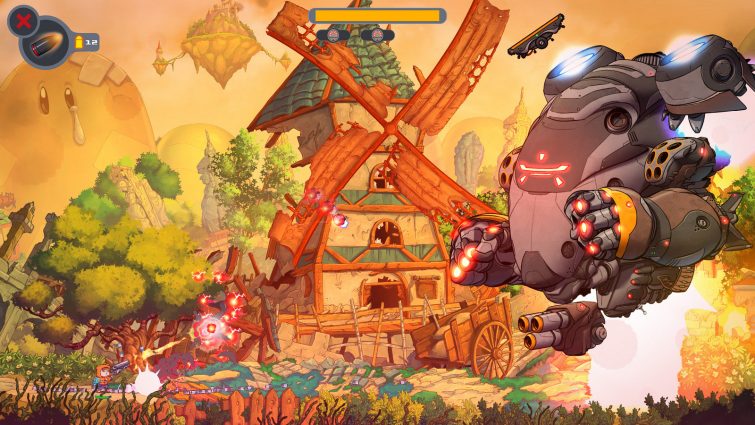 PS4B: How long did it take the team to complete the game for its PlayStation 4 release? Where there any big changes between the concept art stage and the final build we get to play on Sony’s home console?

It took us around 2-3 months to complete the PS4 version of the game, including a quite annoying bug we had up to the last minute. But the game itself took us 3 years to finish.

And talking about the game’s concept, yeah, it was just a bit different from the start. We were sure we wanted to give the player a similar experience to games like Limbo or Another World, throwing completely different challenges and situations to the players so every centimeter of the game feels different and fresh. That was there and it takes a lot of work to make a game like that. But regarding gameplay, we wanted to have some shooter ingredients although the pace was slower at first and we gave it a bit of a push with time for it to be what the game is today.

Hardcore difficulty was there from the beginning too!

PS4B: Are you considering expanding the game with DLC that perhaps showcases some new areas and characters that couldn’t be included in the main game due to time and budget constraints?

Yeah, budget was our main constraint with Rise & Shine. People will find out this game is not a long one, but that’s because it meant a huge amount of work for a team of four to have this amount of attention to detail. But everything that we intended to have in the game it’s there.

Of course, we’d have loved to make some kind of free DLC or sequel of Rise & Shine, but unfortunately sales have not been that good for us to be able to spend more time on it.

Since release, we have made two updates fixing some bugs and making gameplay and menu adjustments for all players to have the best possible experience, but we have no content updates planned, sorry. 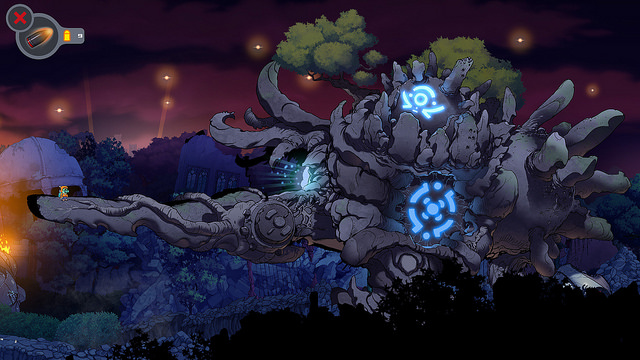 PS4B: And now it is time for us to go. Would you like to add anything?

Yes, I’d like to say that if you like shooters with a twist, you won’t be dissapointed with Rise & Shine! Shooting with Shine, your powerful gun, feels great. The cover mechanic works a charm, controls are tight, is a challenging game and all in all, is a fun little title that I think won’t leave anyone disappointed. So please give it a chance!

Thank you very much.

Persona 5 Gets A New “Accolades Trailer”