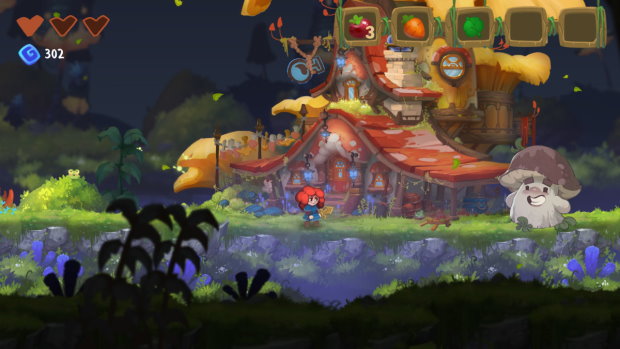 In Potata: Fairy Flower from Sometimes You, you will take control of the titular Potata, who happens to be a witch. She’s on a journey of self-discovery that will take her over seven chapters of 2D platforming fun, with some puzzles thrown in here and there for good measure. Potata’s journey will commence when her totem fox starts to feel unwell, which is why she asks her mother for a cure. Her mother tells her she needs a couple of ingredients to make a remedy, so off she goes into the forest for the first chapter in her adventure.


Potata can move around with the left analog stick or the D-Pad. You can jump by pressing the X button, and the longer you press the X button, the longer your jump will be. Anything that she collects will be sent to her inventory, and these items will be used to progress through the game. To give you an idea of what you’ll be running into – and without spoiling things too much – you might need to find a special fruit that will make a large opponent fall asleep so that you can carry on with your adventure. But to find this fruit, you’ll first need to collect a golden key that can be used to open the treasure chest that contains it! At the end of the first chapter, you’ll also gain a sword to attack with the Circle button. 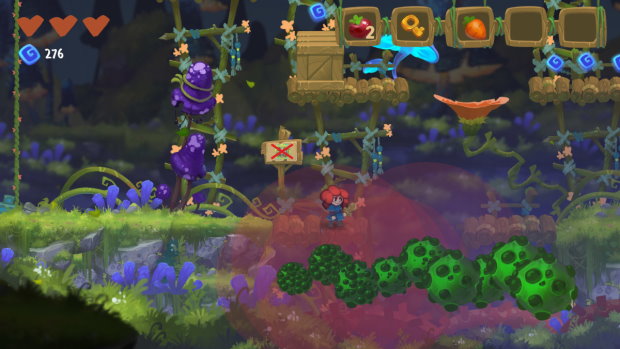 As you explore each of the game’s chapters, you’ll need to keep your eyes open for any enemies or hazards that can damage you. Your health counter can be seen on the upper left corner of the screen, so if you lose some of your health, be sure to search for the hearts that will help you recover it. There are going to be swinging spiky balls, platforms that disappear after you step on them, bottomless pits, floating spiky balls, giant plants with sharp teeth that are ready to take a bite out of you, and more. There will be some secret areas here and there for you to find as well that will reward you for exploring them, while also being tied to a trophy – more on trophies in a bit.


Since you’re likely to die at some point, the game will save your progress automatically when you reach a totem for the first time. If you want to save again, then you’ll need to press and hold the Square button as well as pay the fee asked by the totem. You can see the fee when you approach the totem. As expected, the further you progress in the game, the higher the fee will be, so be sure to always collect as many of the rune coins as you can! The rune coins will also have other uses, such as paying a fee for a hint when trying to solve a puzzle. The puzzles are not that hard, to begin with, but if you’re ever stuck, spending some rune coins could be a good option! 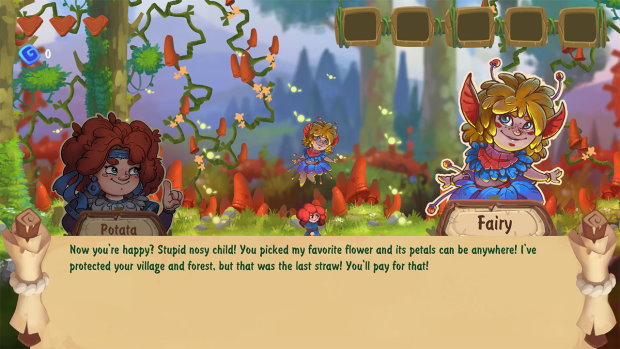 The good news for trophy hunters is that Potata: Fairy Flower has a full trophy list with a Platinum trophy. The bad news is that a big chunk of the trophies is missable, so unless you’re following a guide, odds are you’re going to be missing some of them during your first run. As a heads-up, one of the trophies is for manually saving on totems ten times – which you should take care of by chapter 2 at the latest –, one is for dying ten times (which shouldn’t take much work since you can die over and over again near the first totem in the game), another one is for solving a puzzle without purchasing a hint, and there’s a missable one at the start of the game for making your mom angry, which, if missed, wouldn’t take you more than five minutes to get in a new run. 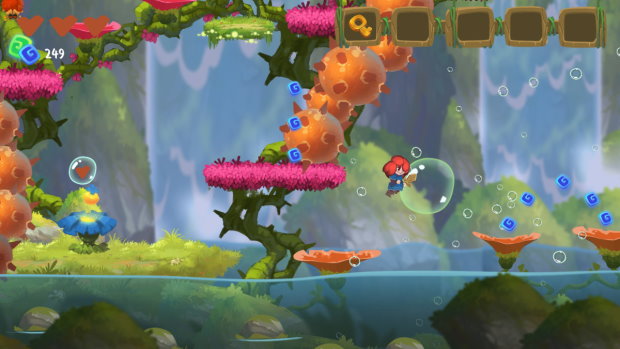 If you’re looking for a fun and colorful 2D puzzle platformer with a bit of action on the side, then Potata: Fairy Flower could be what you need. The game will take you a handful of hours to complete, and trophy hunters will have a Platinum trophy to aim for that, yes, does feature some missable trophies, but as long as you explore every stage in full, you should be good to go. Are you ready for an adventure?

Disclaimer
This Potata: Fairy Flower review is based on a PlayStation 4 copy provided by Sometimes youSometimes you.

Fly Punch Boom! Out Next Week