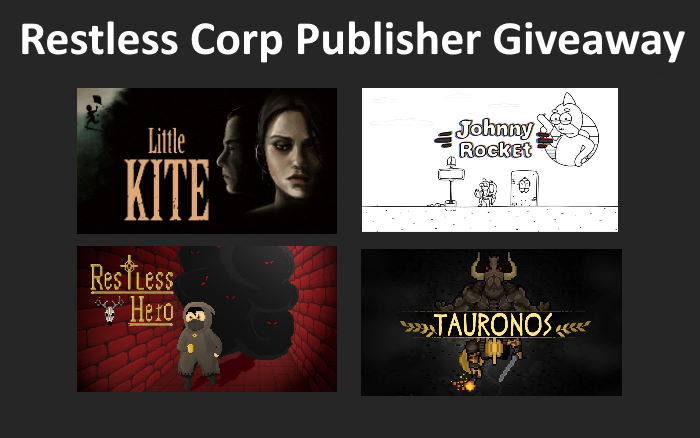 Restless Corp is offering you the chance to win a free game from their Nintendo Switch catalog!

END_OF_DOCUMENT_TOKEN_TO_BE_REPLACED

Little Kite from Restless Corp and Anate Studio is a Rated M for Mature point and click adventure game that deals with a serious issue. Check our Little Kite review!

END_OF_DOCUMENT_TOKEN_TO_BE_REPLACED

We’ll be working on a review for Little Kite, so I got in touch with Andriy at Restless Corp to talk a bit about the game. Come check it out!

PS4Blog: Hi! Thank you for joining us this afternoon. Can you please help us get started by telling our readers a bit about yourself and your work?

My name is Andriy, and I am a leader of the Restless Corp team located in Ukraine. Restless Corp started when my partner – Ihor – and I started to develop a game called Restless Hero while still being University students. We decided to go for pixel art as it was personally easier for us as we did not have any prior experience making art since we both focused on programming and computer science. Being a part of the game developers community, we were communicating with a lot of game devs, and only a few of them were able to port and release their games on consoles.

That is when we decided to help other developers in porting and publishing their games on consoles. Now we have four people working in our team. In less than a year, we managed to publish three games and conducted a successful Kickstarter campaign for Johnny Rocket.

END_OF_DOCUMENT_TOKEN_TO_BE_REPLACED

Point and click adventure Little Kite from Restless Corp is out now on Nintendo Switch. Come check it out!