Yorbie was one of the first platformers to release on the PlayStation 4. Before playing it, I was very excited since it looked similar to a Ratchet & Clank option. Without spoiling my revisited review, I’ll let you know that my excitement vanished only a few moments after I started playing.

END_OF_DOCUMENT_TOKEN_TO_BE_REPLACED

Yorbie Episode 1: Payback’s a Bolt is an action game that resembles Ratchet & Clank: All 4 One, the four player co-op Ratchet game that released on PS3 a few years ago. How does Yorbie stands on its own?

Take note that while the game’s title states “Episode 1,” the studio stresses that “This release is NOT an episodic release but a full game“.

END_OF_DOCUMENT_TOKEN_TO_BE_REPLACED 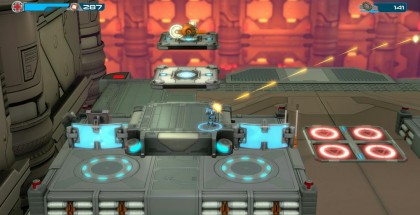 Yorbie: Episode One Is Ready For You On PS4

Indie developer/publisher Happy Dance Games got in touch with us to mention that Yorbie Episode 1: ‘Payback’s a Bolt is now ready for action on PS4. This robotic adventure can be enjoyed either in single player mode or in local multiplayer for up to four players, allowing everyone to join in on the fun.