We’ve been doing giveaways for a while now, and since the holiday season is now in full swing, we thought it would be great to launch a new edition of our HUGE yearly giveaway, which proved to be VERY popular last year! Interested? Then read below to find out what YOU could win for FREE!

END_OF_DOCUMENT_TOKEN_TO_BE_REPLACED 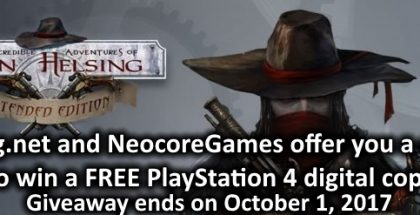 The FREE GAME giveaway for The Incredible Adventures of Van Helsing: Extended Edition (PS4) is going smoothly… but if you want a chance to win a free copy of this game, then you better act fast!

Tracey reviewed The Incredible Adventures of Van Helsing: Extended Edition on PlayStation 4, an adventure game, from NeocoreGames. We’ve also interviewed the developer, and you can read it right here.

Here’s an excerpt of her review:

The Incredible Adventures of Van Helsing: Extended Edition is a fun game that will remind players of the Diablo series – which is never a bad thing. There’s plenty of content on this one as well as a full trophy list with a Platinum. So if you feel you’re up for a challenge, check out this game today!

Now’s YOUR time to win a FREE US PSN copy of The Incredible Adventures of Van Helsing: Extended Edition (PlayStation 4)!

Confused with the new giveaway plugin? Head right here for more information! And don’t forget to come back every day for your free daily entries!

END_OF_DOCUMENT_TOKEN_TO_BE_REPLACED

We had fun with The Incredible Adventures of Van Helsing: Extended Edition when we did our review for the game, so we got in touch with Neocore to talk about the game’s release on Sony’s PlayStation 4.

PS4Blog: Welcome to PS4blog.net! Good to have you with us today. Could you get us going by presenting yourself to our readers and telling them a bit about yourself and your work?

Neocore Games is an indie studio located in the heart of Budapest, Hungary with more than 50 people busy creating games. We have been making and publishing video games since 2009, starting with the King Arthur series and later continuing with the Van Helsing games. Now, along with Van Helsing’s recently released PS4 port, we’re focusing on our biggest project yet: Warhammer 40,000: Inquisitor – Martyr, which is an ARPG set in Games Workshop’s well-known grim, space gothic world. The game’s alpha is already playable on PC. We’re also, of course, be working on a PS4 version.