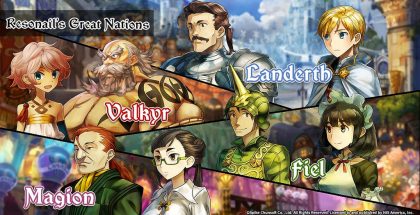 NIS America has let us know that Grand Kingdom will include some great bonuses when it releases in Europe and the Americas next month on PlayStation 4 and Vita! Their first announcement is that ALL DLC characters from the Japanese release will be available for free next month! To celebrate, you can check out a new character trailer below showcasing the Valkyrie, Archer, Noble, Paladin and Dark Knight.

END_OF_DOCUMENT_TOKEN_TO_BE_REPLACED

Grand Kingdom – Beta Begins On May 3

NIS America has announced they’ll be doing a Beta for Grand Kingdom, a game they’ll be launching next month on June 17 for PlayStation 4 and PS Vita. When is the Beta? From May 3 to May 10! As you can see, it will be running for a week, giving players access to four classes during the Beta (Hunter, Fighter, Witch, and Medic).