Ammo Pigs: Armed and Delicious from RedDeerGames is an 8-bit style futuristic 2D action game on Nintendo Switch. It’sIt’s the year 2049, and humanity is no more. On the other hand, Pigmanity is still a threat to the Slaughterhouse A.I. Your task is to defeat every opponent on your path as you rescue as many innocent pigs as possible before it’s too late. This is a game that pays homage to the 2D classics of the 8-bit era, with a challenge that keeps you on high alert at all times. 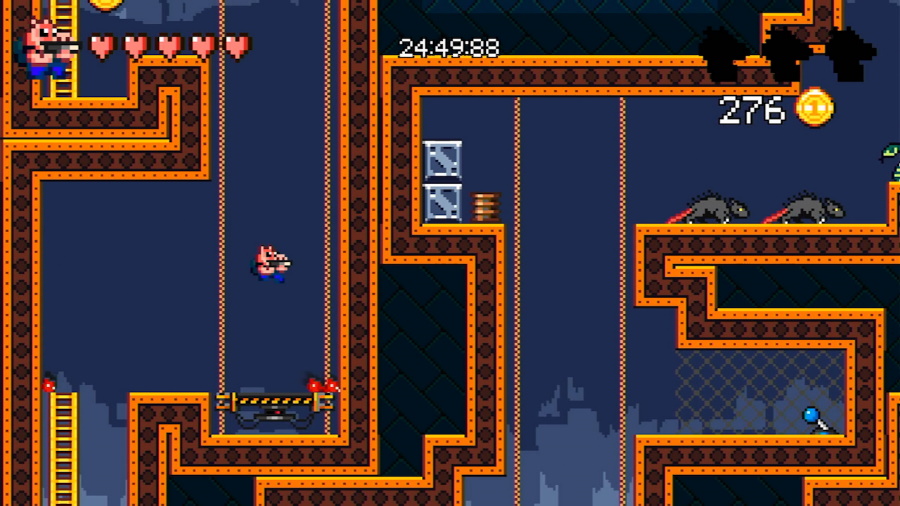 You’llYou’ll control your porcine hero with the left analog stick or the D-Pad. The A button will be used for jumping. You will attack with the ZR button… and that’s it! Your main weapon has unlimited ammo, but the weapons you can purchase at the Ammo labeled contraptions that you can find in each level. More on that in a bit.


As for the pigs you can rescue, you’ll be rewarded for each one that you manage to bring to the white flag that signals the end of a level. There are three levels in each stage, and you’ll need to attack the cage that holds them hostage so that they can join you. You’llYou’ll have to protect them from the moment you free them up until you reach the white flag for that level. If a pig is hit by an enemy or one of its attacks, it’s gone! Bring all three pigs to the finish line, and you’ll get some extra coins for your efforts. 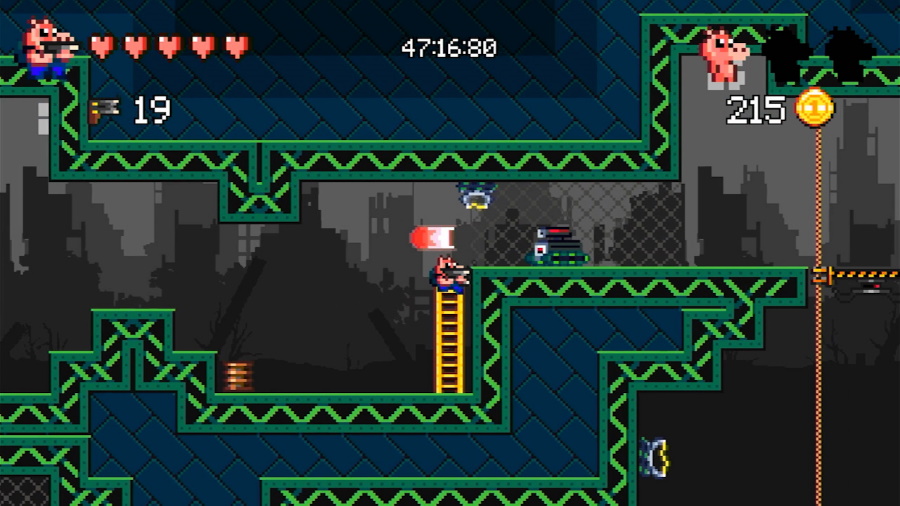 As you defeat enemies and destroy crates, you’ll collect many coins. These coins can then be used to purchase new weapons to increase your odds of survival. Your starting gun is capable of helping you get the job done, but having more firepower certainly wouldn’t hurt. Dual guns can help to deal more damage right away. But maybe you want some mighty rockets by your side? You won’t get many rockets with each purchase, but they will each pack a considerable punch! 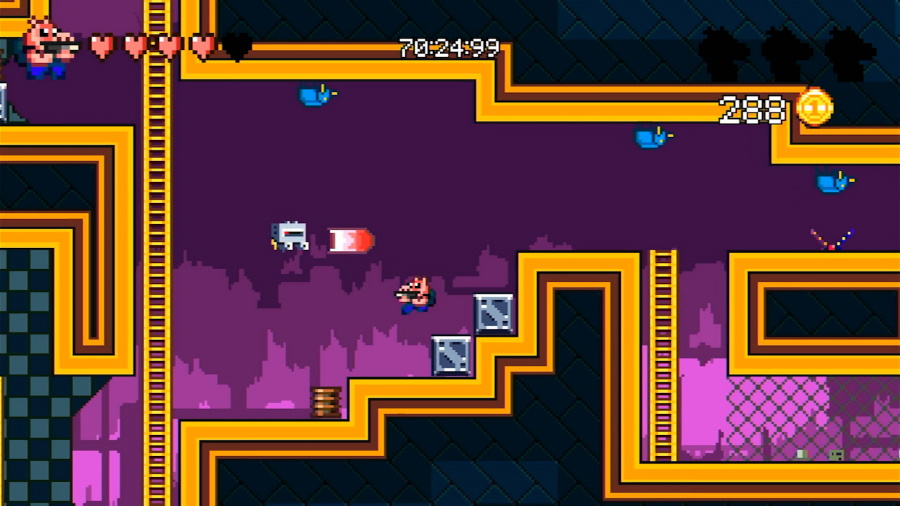 Ammo Pigs: Armed and Delicious is a 2D action game that pays homage to the classics of the 8-Bit era. It features simple gameplay mechanics with only two buttons to worry about, but this means it’s a game that won’t be for everyone, given its old-school-infused gameplay loop. Rescue pigs, activate switches to remove the colored laser barriers, and defeat the deadly robots and mutant creatures. Ammo Pigs: Armed and Delicious is out on Nintendo Switch with a $7.99 asking price. 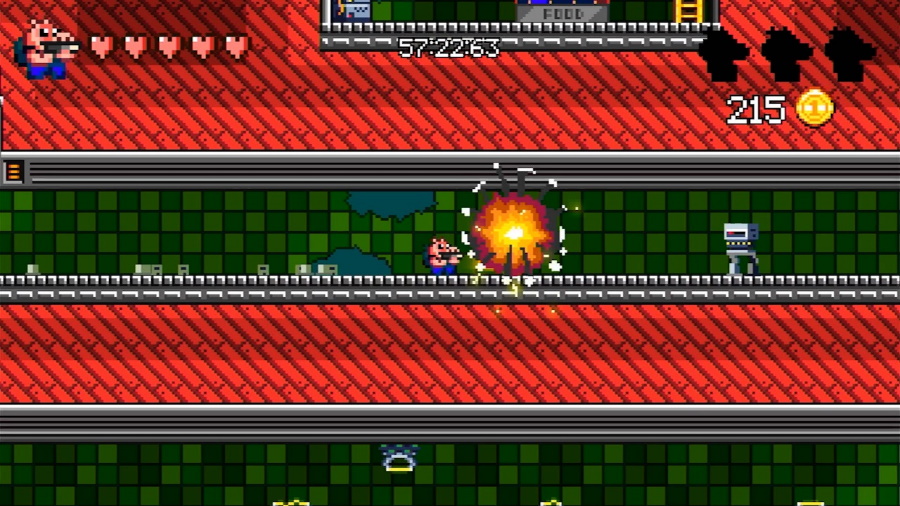 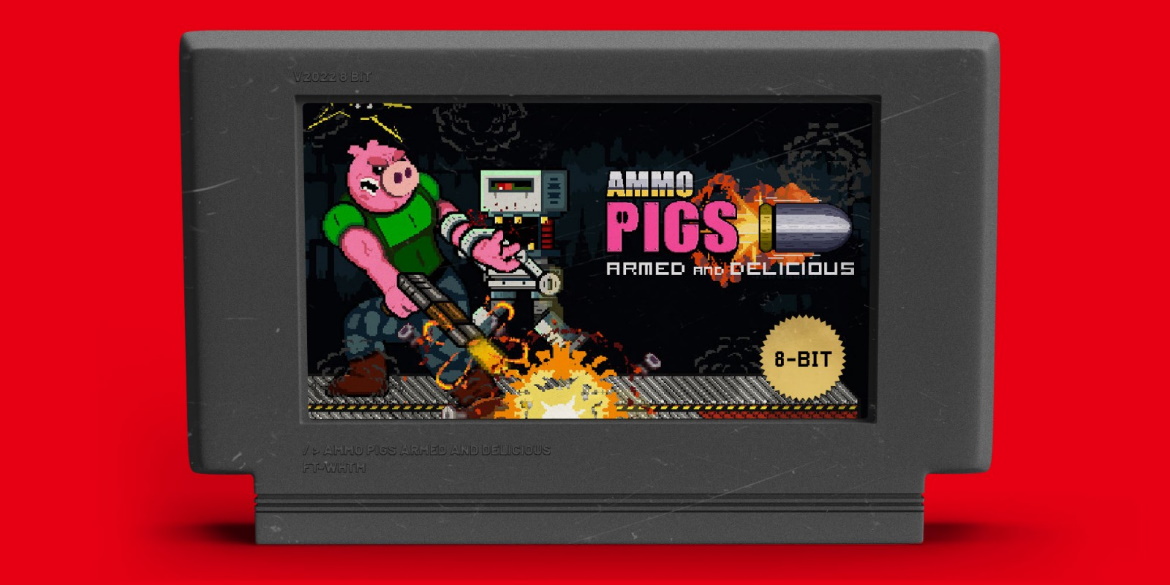 2D retro-style action game that is a bit basic

Disclaimer
This Ammo Pigs: Armed and Delicious review is based on a Nintendo Switch copy provided by RedDeerGames.