Master Dater is the latest comedic social-judging card game from Explosm, who are also behind the very popular – and my personal favorite – webcomic Cyanide & Happiness. Check our Master Dater review!


Master Dater, the messed-up dating game from Cyanide & Happiness, is a party game where players create awful, wacky, loveable characters and vie for each others’ attention and affection. Defeat your rivals. Win at love!

In Master Dater, you’ll be tasked with creating the perfect date for any situation in a comedic setup – if you know Cyanide & Happiness webcomic or their previous games, you have an idea of how it can play out. Following a very successful crowdfunding campaign on Gamefound – getting to over 1500% of the original goal and achieving its original goal in less than an hour, Master Dater is the newest game from Explosm. It follows the releases of Joking Hazard, which asks you to create the funniest three panels of a comic strip using the cards in your hands, and more recently Trial by Trolley, which focuses on your personal values to determine who will be saved. 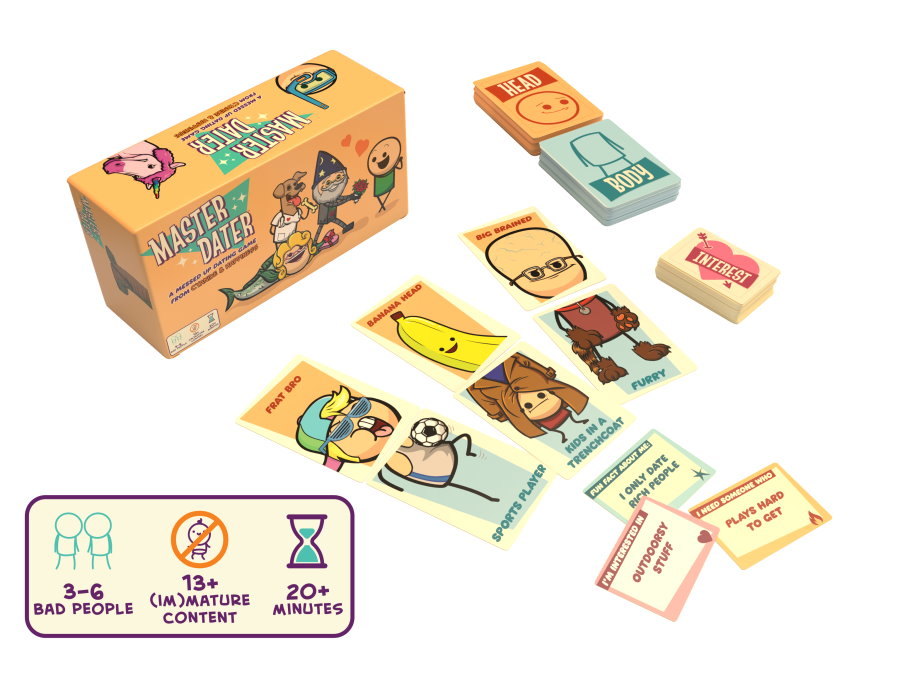 Your goal is to find the perfect date for the sexy single within random situations that will occur during each round. It’s for 3 to 6 people to play, and a game lasts about 20 minutes, and the base game is rated 13+ years old because of the nature of the content. Before diving any further, and as a personal fan of Cyanide & Happiness, I have to refer to this comic about The Sexy Single. Yes, I’ve read every C&H comic, and so should you. 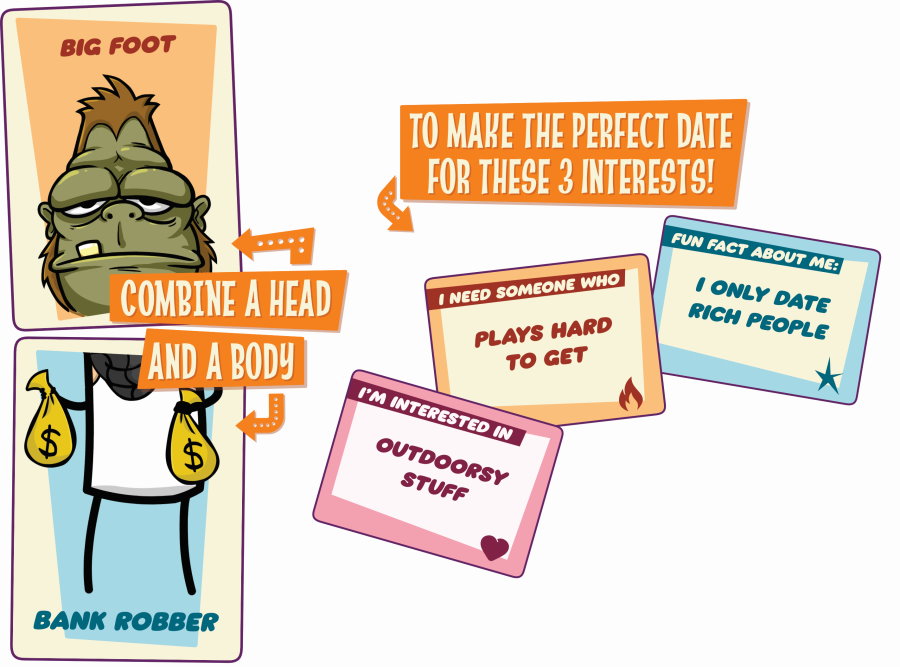 The first step in each round is to determine who will be the Sexy Single. Every other player will be Daters. The role of the Daters is to seduce the Sexy Single, and in a fashion similar to Joking Hazard, the Sexy Single has full authority over who will win a round – more on this later.

The base of the game begins with the Sexy Single, depositing its Head and Body on the table, along with three random Interest cards, which can be “I need someone too” (orange), “Fun Fact about me” (blue) or “I’m interested in” (pink). The Sexy Single will be required to say his dating interests out loud, so the other players can prepare their hands accordingly.

The Daters’ goal is to create the ideal Partner for the Sexy Single using Head and Body Parts they have on hand, trying to match the most Interest cards possible. Then, they will debate individually, explaining why their candidate matches the Interest cards.

After the first initial hour, during which we were trying our best to match the candidate’s Body Parts with the Interest cards, the player’s explanations became more elaborate, and we even improvised and found far-fetch links between the interest cards and the dating candidate. And for me, the social aspect is why the game was so fun. The Body Parts cards have an effect on the round, but we liked how regardless of the cards selected, the player with the best explanation would win. We sometimes took a sexy voice representing the candidate, and I even recall one game in particular when one of the players defended his emo candidate by nearly crying, representing how tortured his soul was. This was perfect! After every Dater has explained its character and defended its characteristics, it’s time for the Sexy Single to determine who will win each of the three individual Interest cards of the round. The Sexy Single can award one to each player or all to the same one. Similarly to Joking Hazard, the “judge” has full authority over who he chooses. In the rules, once a player has won five Interest cards, including at least one of each of the three categories, it will win the round. We noticed that this made for relatively short rounds at 3-4 players (about 15 minutes), so feel free to extend the number of cards required as needed. Also, the more people in the game, the more fun it becomes! A debauched 150-card expansion for the Master Dater card game

In our review copy, we also got the Uncut expansion. The expansion adds 150 cards (25 head cards, 25 body cards, and 100 Interests) and is rated 18+ for mature content, violence, bad words, and sex-related cards.


Having fun with this one will be highly dependent on the people you’re playing with. In my case, the other players thought that they were too much, and after a few rounds, they decided to go back to the base game. I didn’t have the chance to, but playing with my usual gaming crowd with a few beers would have helped ease the mind and have fun with the expansion. In any case, I definitively recommend you keep the two decks separated – just in case!

Master Dater is a lot of fun, and I loved playing with it with the few friends I tested this game with. Joking Hazard was one of my best tabletop games so far, and Master Dater is almost as fun as long as all the players have understood how to play – and how to seduce the Sexy Single. We loved how creative some players got creative and improvised as the evening progressed.

The base game has 115 Head parts, 115 Body parts, and 300 Interests cards, which makes the possibilities nearly endless as you’ll always have to improvise using one of the very few cards you have in hand.

This game is an easy one to recommend to players for upcoming holiday parties. 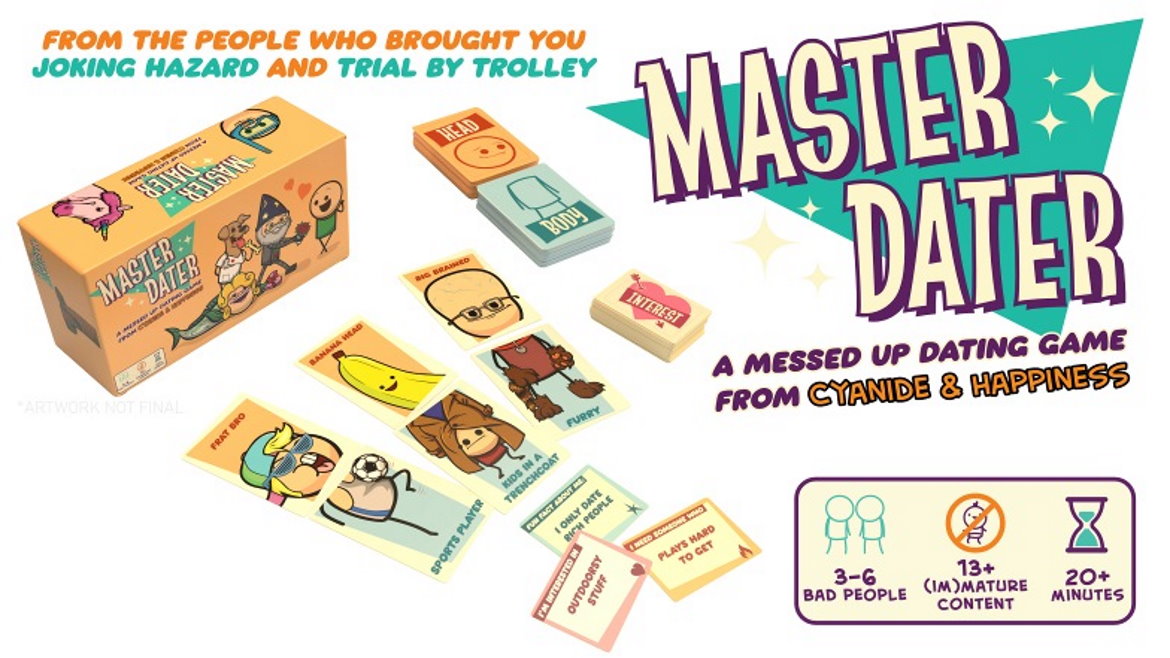 Disclaimer
This Master Dater review is based on a PlayStation copy provided by Explosm.

The Outbound Ghost Out On Consoles