Ship of Fools from Team17 and Fika Productions is a seafaring roguelite you can play on your own or in local or online co-op. Check our Ship of Fools review!


Ship of Fools from Team17 and Fika Productions is a seafaring roguelite you can play on your own or in local or online co-op. The Great Lighthouse that used to protect the Archipelago has certainly seen better days. The Great Lighthouse is broken, which is why monsters of all shapes and sizes have invaded. You and your shipmates must jump into the Stormstrider and travel out to sea to defeat all monsters on your path as you chart a route that will allow you to destroy the evil bosses at the end of each path. 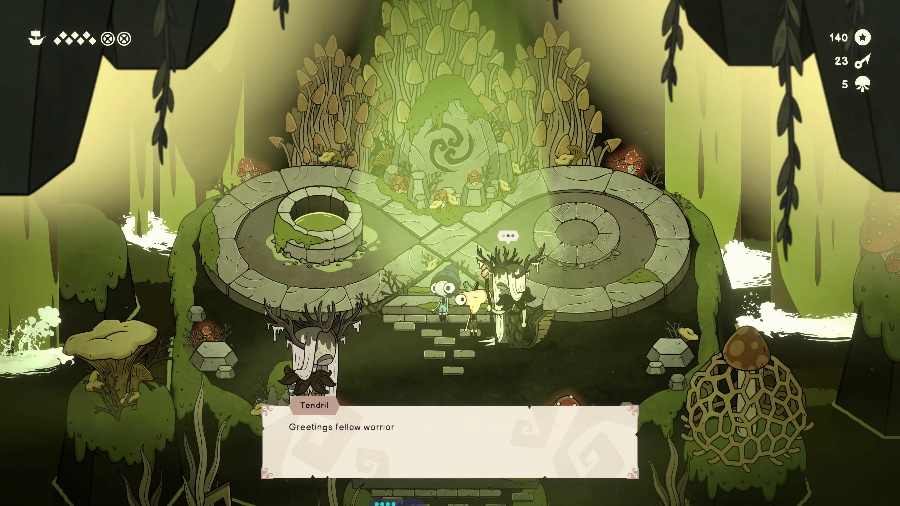 Once you’re ready to go, the first step will be to select your character from the ten available options. At first, there are only two characters to choose from. There’s Todd, who starts with the Humble Hood, which allows him to use his paddle for faster attacks. The other one is Hink, who has Scar of the Past Glory, which makes attacks deal splash damage while also increasing critical hits. Once you fulfill some requirements, you will also be able to select Shelbie, who has a Soothing Shell that increases fire rate, projectile damage, and the speed of cannons loaded. Or maybe you want to select Quill, who has the Stained Headband that increases damage on consecutive projectile hits. As for the rest? You’ll have to play Ship of Fools to find out!


You’ll control your character with the left analog stick or the D-Pad, attacking with the Square button and rolling with the R1 button as needed in order to avoid incoming attacks. If you press and hold down the Square button, you’ll be able to perform a special spin attack that can reflect incoming projectiles. When using this special attack, you will also need to press the left analog stick or the D-Pad in the direction in which you want to reflect the projectile. You can also interact with the X button when needed and press the Triangle button to pick up something. 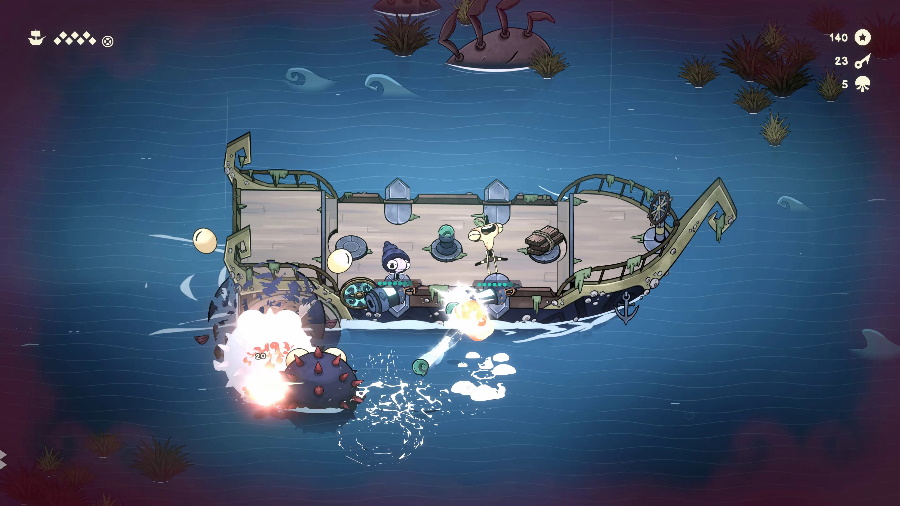 When interacting with a cannon, you will be able to shoot it with the Square button and can press and hold down the L2 button to use a harpoon – as long as you have one on your boat! And when out on the boat, you will need to attack enemies as well as keep the boat in as good a condition as possible. You will need to grab planks and place them on top of any damaged spots to fix them. If you don’t take care of any damage, the boat will end up being destroyed! If playing on your own, the ship will have a special automated sentry cannon that will fire at enemies at a slow but steady pace.


For each run you take on, you’ll move through a hex-based map that will determine what you’ll run into next. There are basic tiles, uncommon tiles, and rare tiles to consider. These include regular combat tiles, tiles that will allow you to move through one hex without a battle, tiles where you can visit the merchant, tiles where you can open a treasure chest, tiles where you’ll be rewarded with coins, harpoons, or an artifact when you defeat all enemies, tiles where you will take on more challenging battles to be rewarded with a trinket, an artifact, or a new ammo type, and even tiles with a big question mark that can send you into any of the aforementioned scenarios. The Tendrils that you collect can be exchanged for some very useful upgrades that can help you in subsequent runs. You could, for example, purchase a bowl of Harpoon Soup, which will give you an extra three starting harpoons. Maybe you’d like a yummy Plank Soup, which increases total hit points by 1. Or perhaps you want a Sand Dollar Soup, which will give you an extra 25 starting sand dollars. Once more NPC return to the lighthouse, you’ll have access to additional upgrades. Rescue Rust, and you’ll get a chance to spend your Tendrils on upgrading your ship’s cannons, which make a big difference for subsequent runs. This is the way you’ll be able to make some progress during the many runs of Ship of Fools.


Speaking of sand dollars, it’s the currency you’ll use in Ship of Fools for buying artifacts, ammo, trinkets, and resources at the shop hex tile on the map of each level. What can you get for your hard-earned sand dollars? You can purchase items such as the Resonance Charm, which adds said effect to the paddle; a Potato Bag that turns your cannon into a seemingly endless spud gun; a Harpoon Box that adds five harpoons to your stock; or maybe a Plank so that you can repair a hole on the deck. 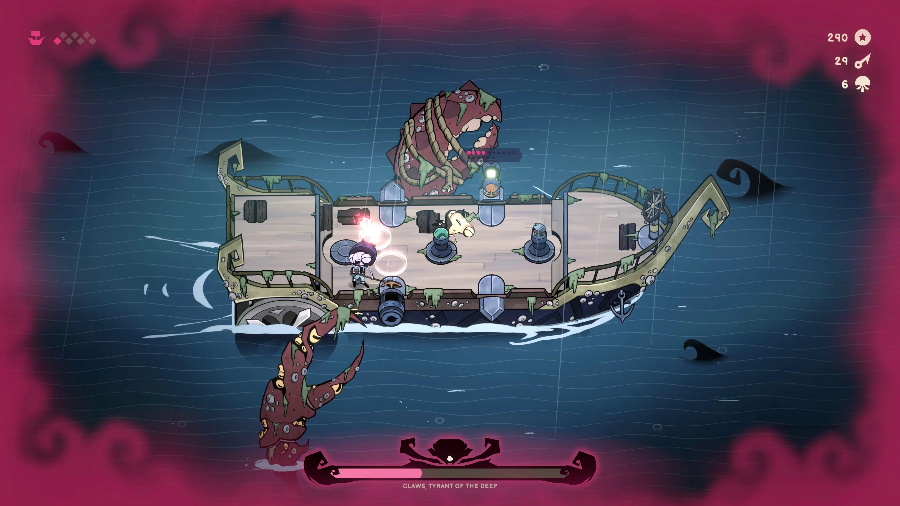 And now, let’s discuss the game’s trophies! Ship of Fools has a full trophy list with a Platinum trophy, and given the game’s roguelike nature, that means that none of the trophies are missable, but you will need to work hard to get that Platinum due to the randomly generated aspect of the game. The list has 12 Bronze trophies, 5 Silver trophies, and 7 Gold trophies to unlock. The objectives to complete include stuff such as destroying thousands of sea monsters, maxing out a cannon, completing a solo run, completing a co-op run, reflecting two projectiles at once, and defeating each of the bosses in the game, to name some examples.

Ship of Fools is a fun and challenging seafaring roguelite with a lot of content for you to take on PlayStation 5. It can be played on your own or in local or online co-op, and it’s one that will keep you busy with a Platinum trophy that can take you over 20 hours to unlock – certainly not as long a Platinum run as other roguelite games. Ship of Fools is available on PlayStation 5 with a $14.99 asking price. 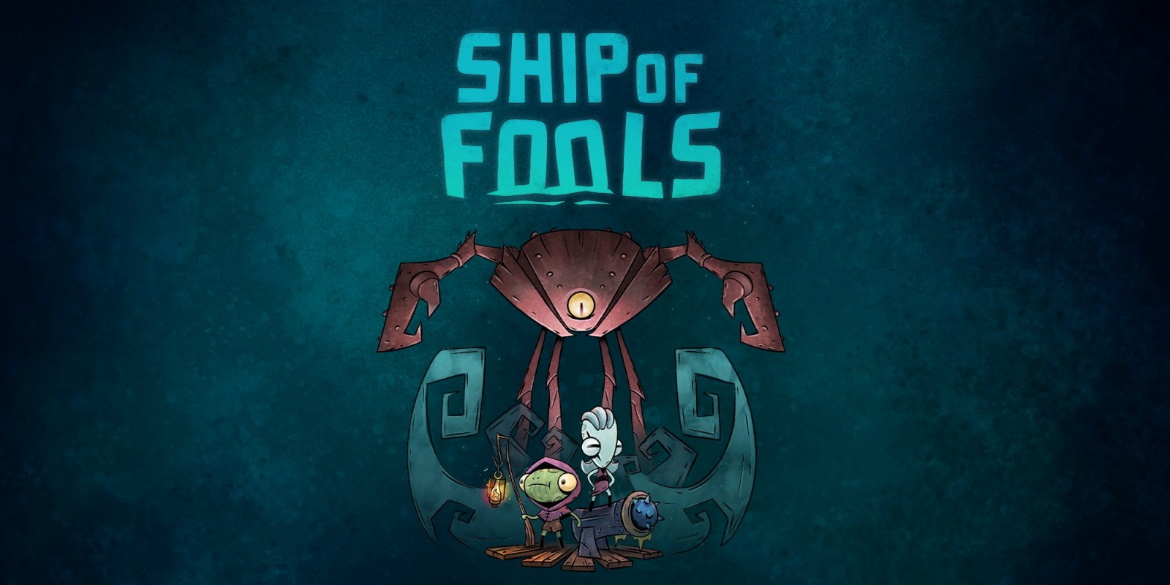 Disclaimer
This Ship of Fools review is based on a PlayStation 5 copy provided by Team17.