New Joe and Mac – Caveman Ninja from Microids and Mr. Nutz Studio is a revamped take on the classic 2D arcade classic now on PlayStation. Mr. Nutz Studio previously worked on the HD Toki remake, which brings us a revamped take on the classic 2D arcade experience. Oh, and the studio also worked on the hand-drawn beat ‘em up Asterix and Obelix: Slap them All! As you can see, the team is well-versed in working its colorful HD magic on classic experiences for a new generation. 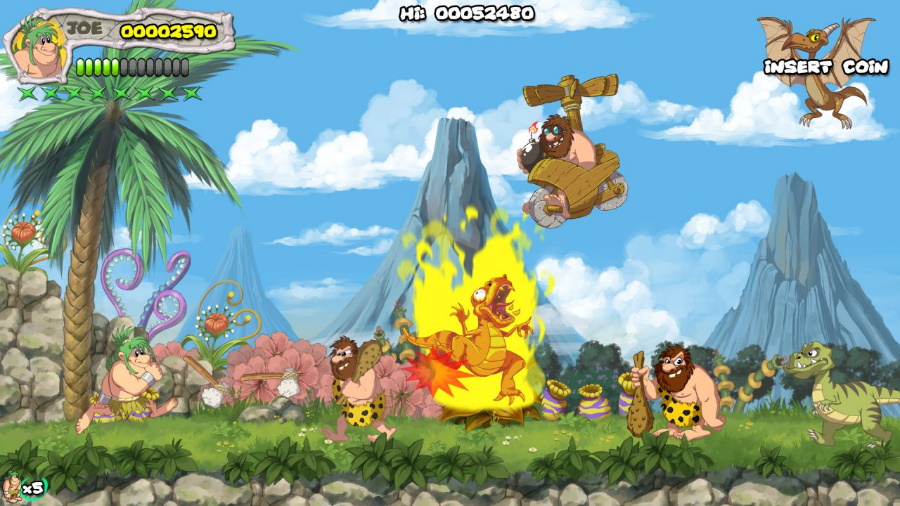 If you have never played the original Joe and Mac, the titular characters – Joe is the green-haired one, and Mac is the blue-haired one – set out on a quest to rescue all of the women of the village who have been abducted by the evil Neanderthal. They will need to fight not only against the Neanderthal but also against dinosaurs of many shapes and sizes, as well as other prehistoric creatures and bosses that will try to stop them and make them fail. They’re strong, but they also need to eat a lot because their health bar will deplete at a steady pace. If you’re hit, a big chunk of it will be gone, so hopefully you can find a large piece of food or several smaller bites to recover.


For New Joe and Mac – Caveman Ninja, we’re getting a full hand-drawn HD remake that brings all of the characters and location to life with great detail, a 16:9 format – and not the 4:3 aspect ratio of the original arcade game – as well as new sounds and better controls. The game can be played on your own or in local co-op, and it offers two main ways to play: Arcade Mode or Extend Mode. Arcade Mode is based directly on the original arcade coin-op, so you’ll get to experience it all over again with the gorgeous hand-drawn graphics. For Extend Mode, you get a longer game that uses the elements of Arcade Mode to deliver a game that feels like a whole new entry in the series. 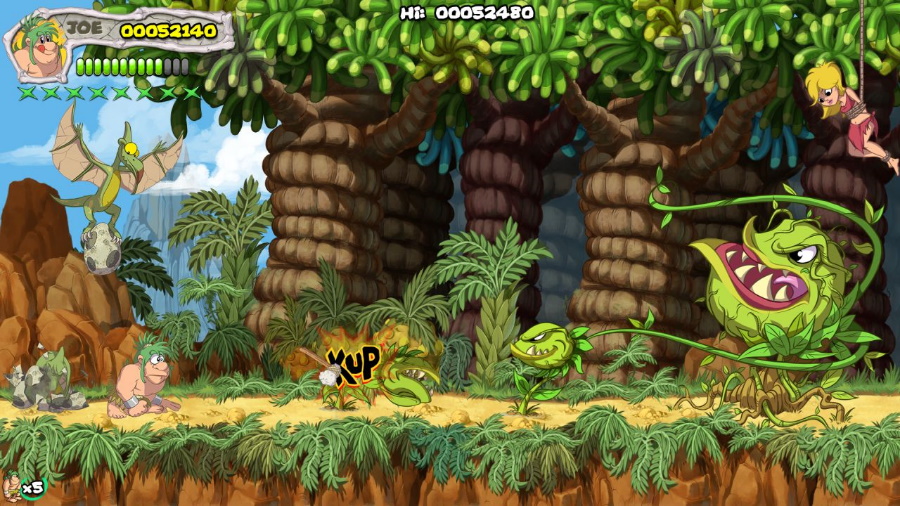 You’ll control your selected character with the left analog stick or the D-Pad as you attack with the Square button and jump with the X button. You can press up on the D-Pad or the left analog stick to perform a higher jump to reach some platforms. While your regular attacks will help you defeat smaller enemies and most Neanderthal in one hit, some larger enemies or enemies that are riding a contraption will need more hits. To speed things up, you can press and hold down the Square button to make your character charge up an attack so that you can then unleash a much larger – and more powerful – version of your current weapon.


You start out with an axe that is certainly useful – especially when taking on a couple of the bosses in the game, but you can also change it to one of the other weapons that you can collect by opening up the eggs that some enemies are carrying around. There’s the fireball that can burn enemies and which will leave a flame on the ground if charged up. The trusty boomerang will return to you if it doesn’t hit any enemies. Or you could get the best weapon of them all: the stone wheel! 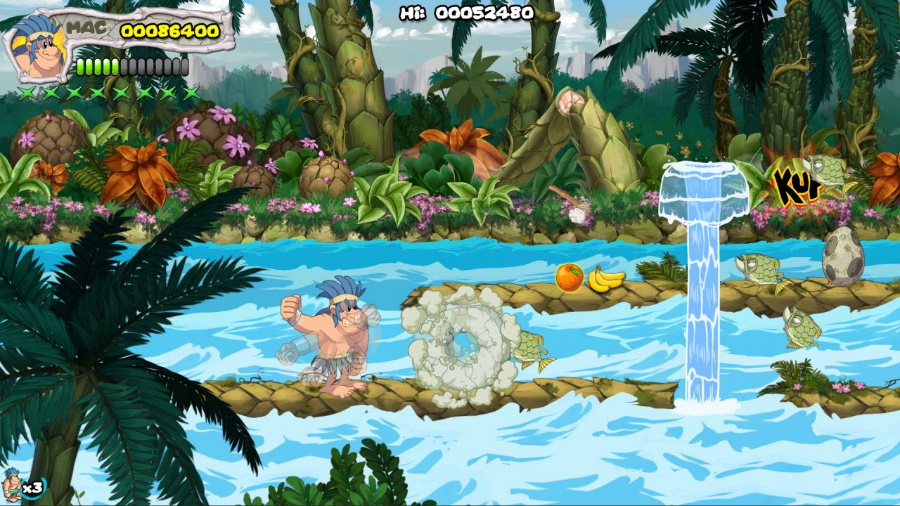 Trophy-wise, this is an interesting release since it features a full trophy list with a Platinum trophy that focuses solely on beating all of the levels in the Arcade Mode – and yes, that means completing all of the different routes where the path splits into sub-levels, such as stages 2A and 2B. That list includes 9 Bronze trophies, 3 Silver trophies, and 10 Gold trophies. On top of that, there’s a DLC trophy list that focuses on completing levels and sub-levels in the Extend Mode, a list that adds 7 Bronze trophies. 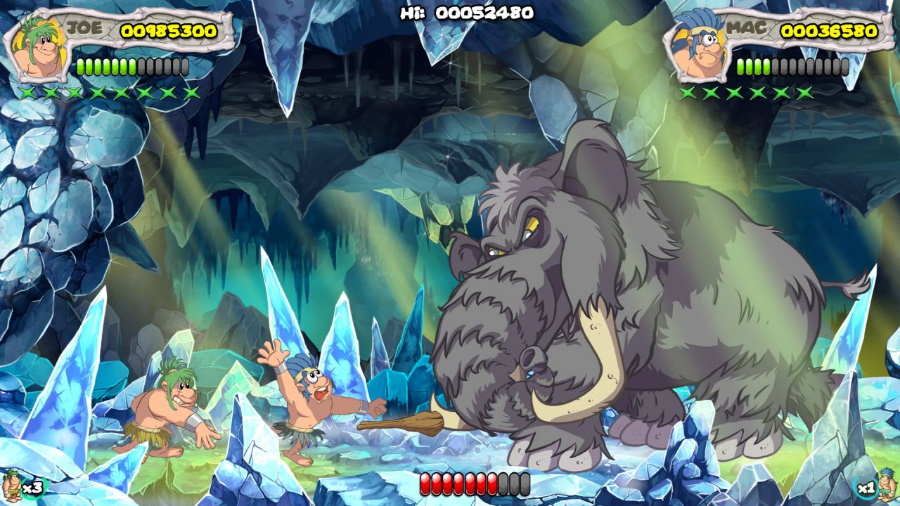 As a fan of Joe and Mac and of the other hand-drawn games that Mr. Nutz Studio had worked on, I had been looking forward to taking New Joe and Mac – Cave Ninja for a spin. I’m here to report that this PlayStation remake is just as fun as the original, and Extend Mode presents a completely new experience that does the original justice. There is some slowdown at times, but nothing that will get in the way. This one offers some replay value since there are different sub-levels to take on along the way, as well as different endings depending on what final branching path you take after defeating the last boss. I spent a ton of quarters playing the original game in the arcade back in the day, so its $29.99 asking price is well worth it. On top of that, it’s a Cross-Buy title, granting you access to both the PlayStation 4 and the PlayStation 5 versions of the game at no extra cost. 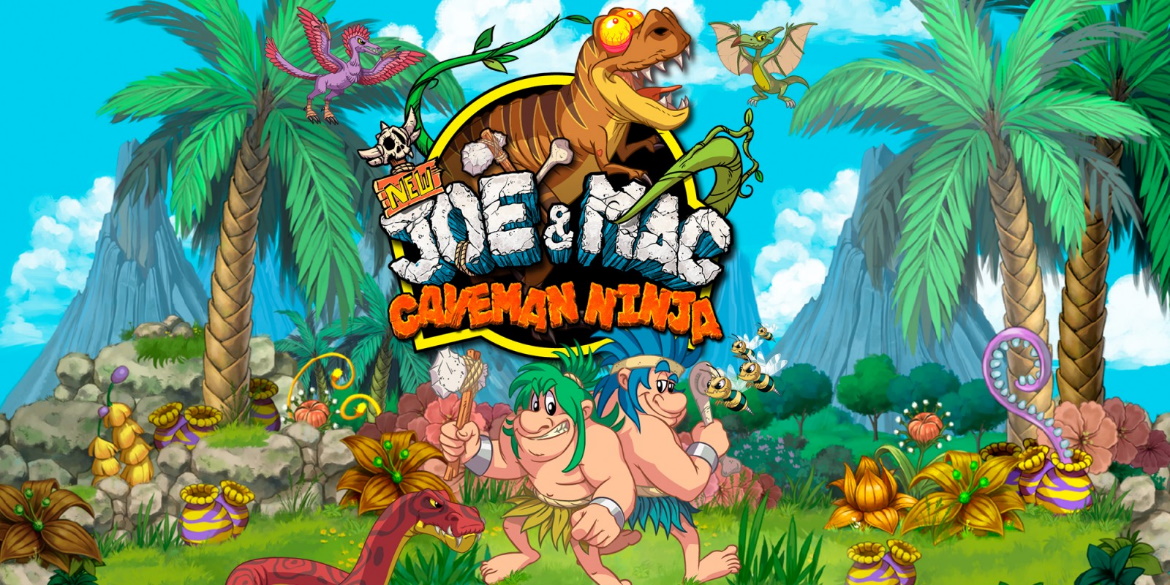 A fun HD remake of an arcade classic

Disclaimer
This New Joe and Mac: Caveman Ninja review is based on a PlayStation 5 copy provided by Microids.