Shovel Knight Dig is the latest spin-off from the beloved Yacht Club Games series with the help of Nitrome. You might remember developer Nitrome thanks to the pair of gems that are the colorful 2D platformer Bomb Chicken as well as the action-packed Gunbrick: Reloaded, which you should definitely also check out on Nintendo Switch! This new game is more action-packed than Shovel Knight Pocket Dungeon, but it does share one trait with this new game: Shovel Knight Dig is also a roguelite!

Your journey beings when you cross paths with evil criminal leader Drill Knight, who destroys the camp of Shovel Knight and Shield Knight while drilling his way into the underground, escaping with all of their stuff! Shovel Knight must now chase after Drill Knight and try to find him to recover their knapsack and all of their belongings before it’s too late. So off you go and jump into the well with your shovel by your side as you prepare to dig your way through each section of the well. 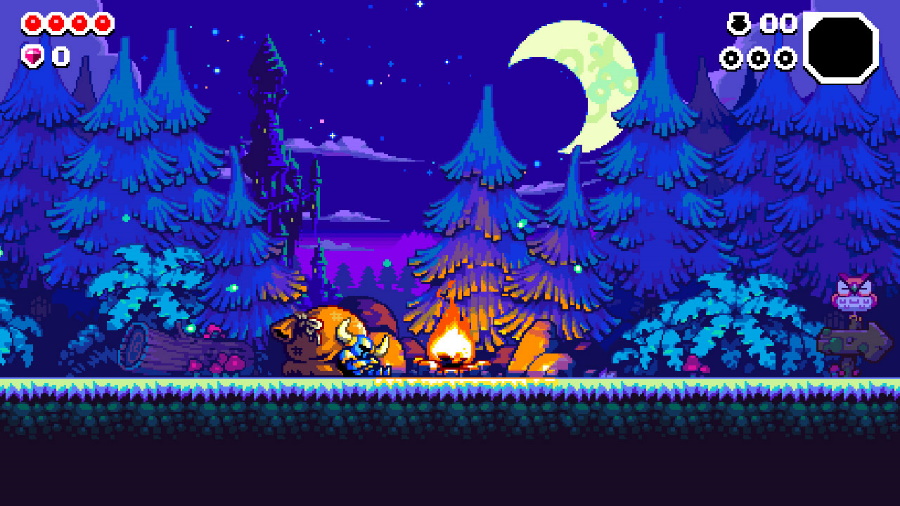 You’ll control Shovel Knight with the left analog stick or the D-Pad as he jumps with the B button and attacks with his mighty shovel with the Y or A buttons. The shovel is key for Shovel Knight Dig since it will be used to dig deeper and deeper into each area! Given the game’s nature, once Shovel Knight jumps, it will then place its shovel below him. This will allow him to immediately destroy any blocks below him while also functioning as a special attack to damage enemies as it bounces off from them. If you find a Relic, you’ll be able to use it with the X button in exchange for some magic points.


The many gems that you collect during your adventure can be spent at Hoofman’s fine establishment to obtain some temporary and permanent items that will make subsequent runs easier. You could, for example, get a temporary Relic Key, which can be used to open up one Relic Room. This is important since completing Relic Rooms will unlock new Relics! Another option is the Follow Slot upgrade, which is a permanent one. This will make it possible for one more item to follow behind you, which makes a big difference!

Do know that if you’re defeated during a run, you’ll lose several of the gems that you’re carrying. This is why it pays to banks some of the gems you collect so that you can keep them safe for purchasing temporary and permanent items between runs. On the other hand, you should always have some gems on you if you want to make some purchases while traveling down the well because you never know when you’re going to find Chester! If you see a rather large treasure chest, that means that series staple Chester is in there. 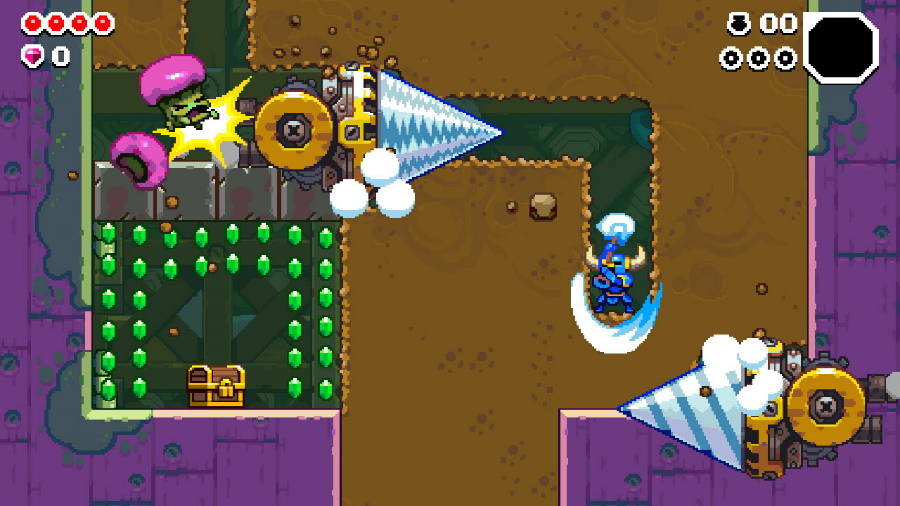 Chester will be selling a variety of accessories and Relics to aid you on your new quest, and they can certainly prove to be invaluable. Trade your gems with Chester, and you’ll be able to get your hands on accessories such as the Looking Glass, which looks for secrets and points them out, or the Inverse Repeller, which magnetizes gems to you, making them move even through the dirt! Or you could maybe go for a Relic like the Flameo Wand, which lobs a fiery orb at foes to deal damage from a safer distance.


Your gems can also be spent with Tom Bola, a mole that – for a fee – will spin his tombola so that you can get a guaranteed prize out of the assorted selection. There’s also Gastronomole, who can keep you healthy thanks to his cooking. Spend your gems and get a Fortified Roast that will refill your health and grant you three shields or a Blinding Hot Curry that will double your max health… while also hiding your total max health! You can also find the Armorer deep in the well and help to bring him back to the surface. Once you do this, you’ll be able to pay with your gems to have him craft you some new armor!

If you’re too slow while moving through the well, you’ll be reminded of how this is an action game thanks to the evil Omega Saw! As its name suggests, the Omega Saw is a huge saw that will pursue you down the well if you’re too slow. If it catches up to you, prepare for a world of hurt! The good news is that even if it does manage to find you, you’ll still have one last shot at surviving if you time things just right and bounce off from its shielding. This could be a bounce that allows you to continue digging deeper to put some distance between yourself and the Omega Saw. 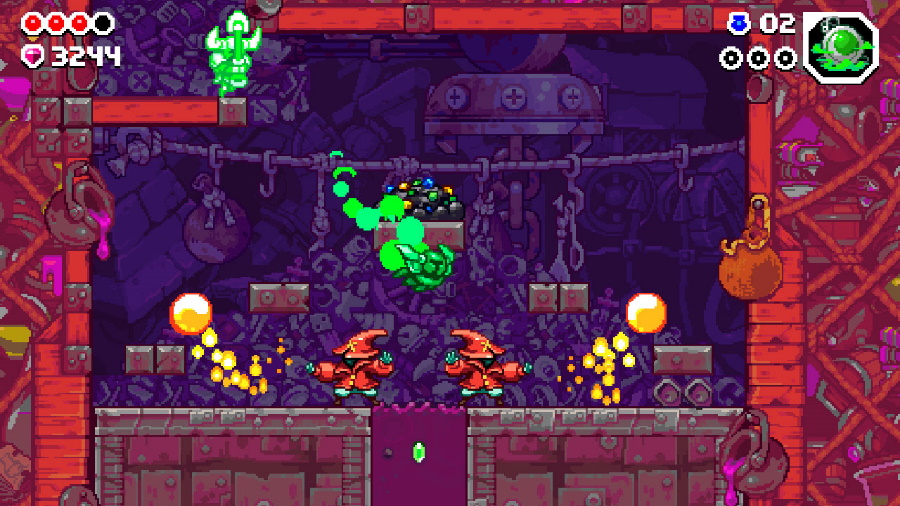 Why would you stop every now and then and slow down? Because along with all the digging, gem grabbing, and enemy fighting, you will also be trying to collect the three Golden Gears in your path! You’ll need to search everywhere, making sure to hit any suspicious walls or any nails or screws that signal where a spot in the level can be broken. Collect all three Golden Gears and place them in the Drill Capsule to receive a reward! Once you reach a Drill Capsule, you’ll have finished that area, and will need to select which route you’ll take next.


You can also find health and magic upgrades that will permanently boost your overall health and magic, respectively, treasure chests that can be opened with a good hit from your shovel or that will require you to first find a key, platters that can either have food inside or a bomb trap, or even nests! Bring an egg to a nest, and depending on the type of nest, a creature will hatch.

To make the game as accessible as possible, the team has included a series of accessibility options that can help gamers of all skill levels enjoy their time with Shovel Knight Dig. These include enabling or disabling screenshake, adding up to five points of extra health, improving the chance of food or gems dropping when defeating enemies, boosting the damage that Shovel Knight deals with each attack, as well as changing the game’s speed in case things are a bit too hectic for you. Enabling any of these options will disable being able to unlock Feats.

As has been the case for other Shovel Knight games, Feats are special objectives you can work on completing in order to 100% the game – think the Trophies you’d find on a PlayStation game. These objectives include completing the tutorial section, buying your first item, purchasing or unlocking all relics, armors, and accessories, spending a total of 20,000 in the shops at the surface, finding all secrets in one world, wielding five relics at once, opening the Drill Capsule 10 times, posting a score to the leaderboard, defeating any of the bosses without taking any damage, completing the game, doing so in a single run, or completing the game in 25 minutes. You know, the usual. 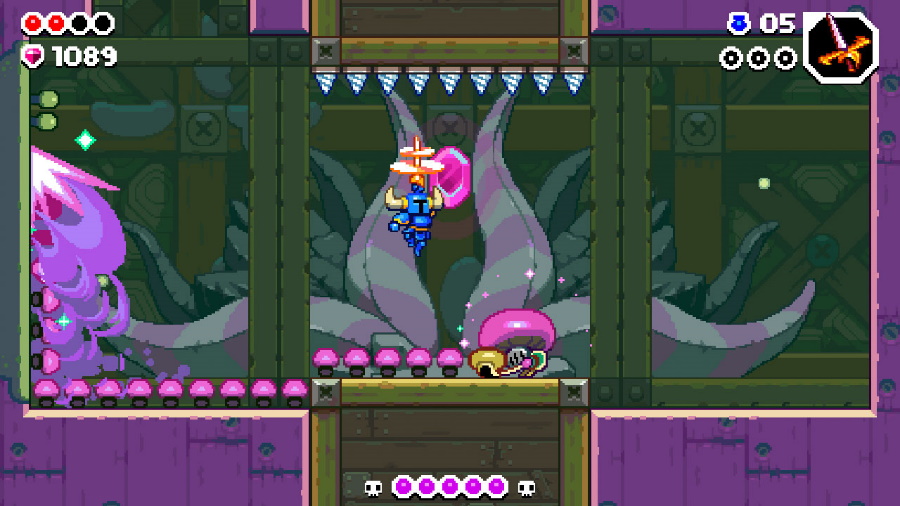 Disclaimer
This Shovel Knight Dig review is based on a Nintendo Switch copy provided by Yacht Club Games.