Kardboard Kings: Card Shop Simulator from Henry’s House and Akupara Games is a colorful management game with a twist. You’re now the newest owner of a boutique local game shop in Parakeet Bay. You’ll have to collect, buy and sell cards to make a living, and you’ll have to score some rare cards in the process if you want to make ends meet! And on top of keeping the lights on, you’ll also have to work on decorating your store to lure in more and more customers.

After George Hsu passed away, the first Warlock world champion, the CEO of the Warlock Company, is not very happy about how the Legendary Cards were stolen. What are the Legendary Cards? Well, you’ll have to play through Kardboard Kings: Card Shop Simulator to find out! What I can tell you is that for this one, you’ll be taking on the role of one Harry Hsu, who just happens to be George’s son, the previous owner of this fine establishment. You’ll be joined on this journey by Giuseppe, a talking Cockatoo that will give you some pointers along the way as the story progresses. 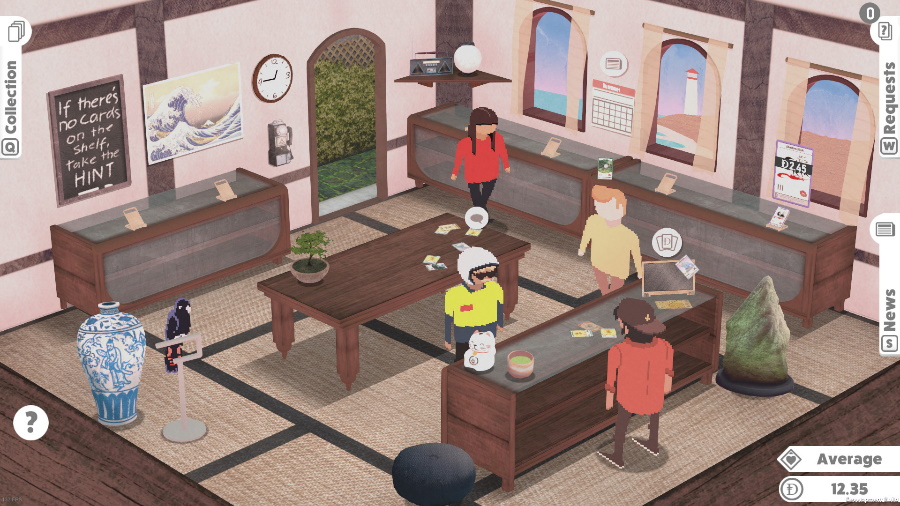 With the game making the jump from PC to console, the mouse controls have been transferred to using the left analog stick to move a cursor around the screen as you use the A button to confirm your choices along the way. Along with that, you can press the ZR button to open up the news tab to check any information that can aid you with your purchase. Since you need to display cards in the store to sell them, you’ll have to press the ZL button to check your collection so that you can choose what cards to present.


You’ll be buying cards from customers that visit your store, but you’ll also be making many of your purchases from Gbay. These purchases will be not only for the cards that you’ll eventually flip but also for the decorations that you’ll place around the store. Yes, Gbay is pretty much a stand-in for eBay. And if you’ve bought anything on eBay, you know that buying more than one thing at once and then paying a lower overall shipping fee can save you a lot of money in the long run! Buying several items from the same Gbay seller will also reward you with a bulk discount.

Harry is also a collector, so he most certainly wants to see every Warlock card enter his shop, and since there are over 100 Warlock cards in Karboard Kings, you’ll also have to dive into some booster packs every now and then so that you can have a chance of finding some of the rarer shiny card variants at a more reasonable price. There are also some additional cards to consider that are rarer than rare. 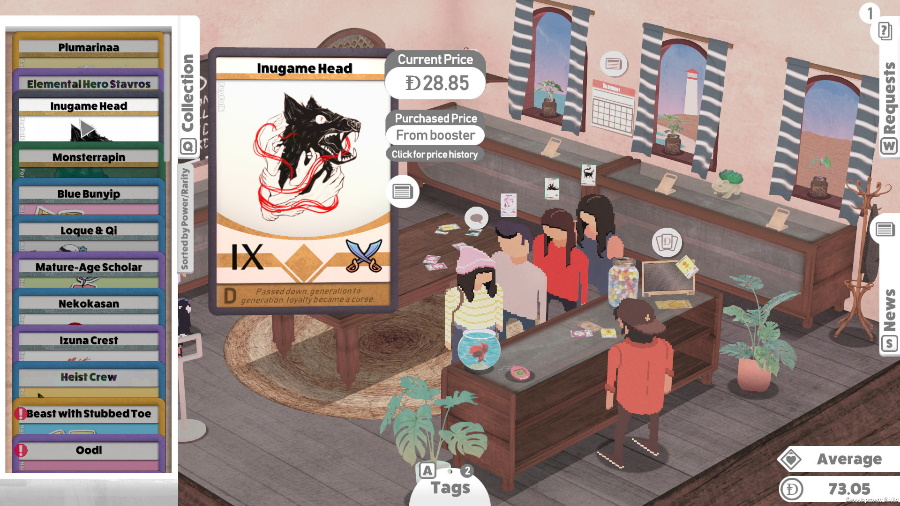 If you want to succeed, then you’ll need to know what the symbols on each card mean. The roman numeral in the lower left is for a card’s Power. A symbol on the bottom right corner will be for its ability. There’s also a smaller symbol on the bottom left corner, which is for that card’s set. On top of that, rare cads will have details, uncommon cards will have silver details, and common cards will have none. A card can also be shiny, which will double its price!


While a lot of your sales will happen when customers visit the store, some of them might call instead and request specific cards. You can check to see if you have the card in your collection or try to find that card for them and fulfill the request later. If you try to rip off a customer, you’ll risk your reputation going down. But if you give a customer a good deal, there’s a chance of the store’s reputation going up!

Why? Because you need to remember that sometimes there are promo cards used at special events or included with other items in specific promotions. What if a card is included in a kid’s meal? And then there are cards that get a reprint, which will certainly have an effect on the value of the original edition. You also have to consider how any popular card game like Warlock will also end up having fake cards printed out! Some cards will be trending on some days, while others might end up being banned from tournament play. 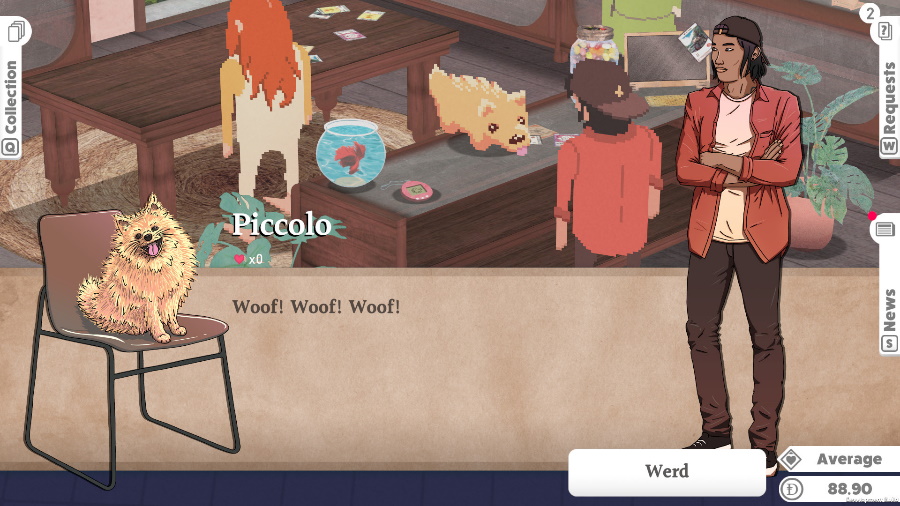 Any card store worth its salt should also hold a tournament every now and then, along with special themed events that can bring some extra eyes into the store. But to do this, you’ll first have to increase your store’s reputation. Maybe having a booster pack party would help? Declan O’Regan from the Union will drop by every now and then and have you take on a new goal. Complete that goal, and you’ll be rewarded with some extra decorations for the shop! You could be tasked with, say, spending at least X on decorations within Y days or gaining Z cards in Y days.


Progress far enough in the game – that is, finish the main story arc – and you’ll be able to access the content from the Card Game Island DLC, which is included with your purchase at no extra cost. Card Game Island allows you to actually play the Warlocks collectible card game, which is why it’s unlocked after taking on the main story arc since, by then, you’ll have learned what is needed to understand how Warlocks battles work. You will also unlock the King of Card Games Mode, which considerably increases the difficulty for those of you looking for an extra challenge. 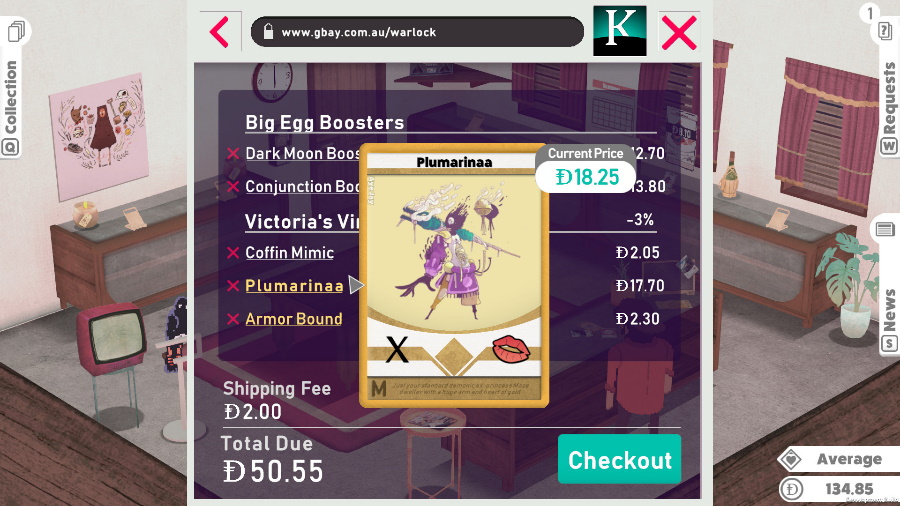 As the name suggests, Kardboard Kings: Card Shop Simulator offers you a chance to manage a card shop as you buy, trade, and sell cards for the in-game Warlocks collectible card game. For its Nintendo Switch release, the game also includes two DLC packs by way of Card Game island, which gives you a chance to play the Warlocks game, as well as the King of Card Games Mode, which boosts the challenge by dialing things up to 11. Kardboard Kings: Card Shop Simulator is out on Nintendo Switch with a $19.99 asking price, and it’s one you should check out on the console. 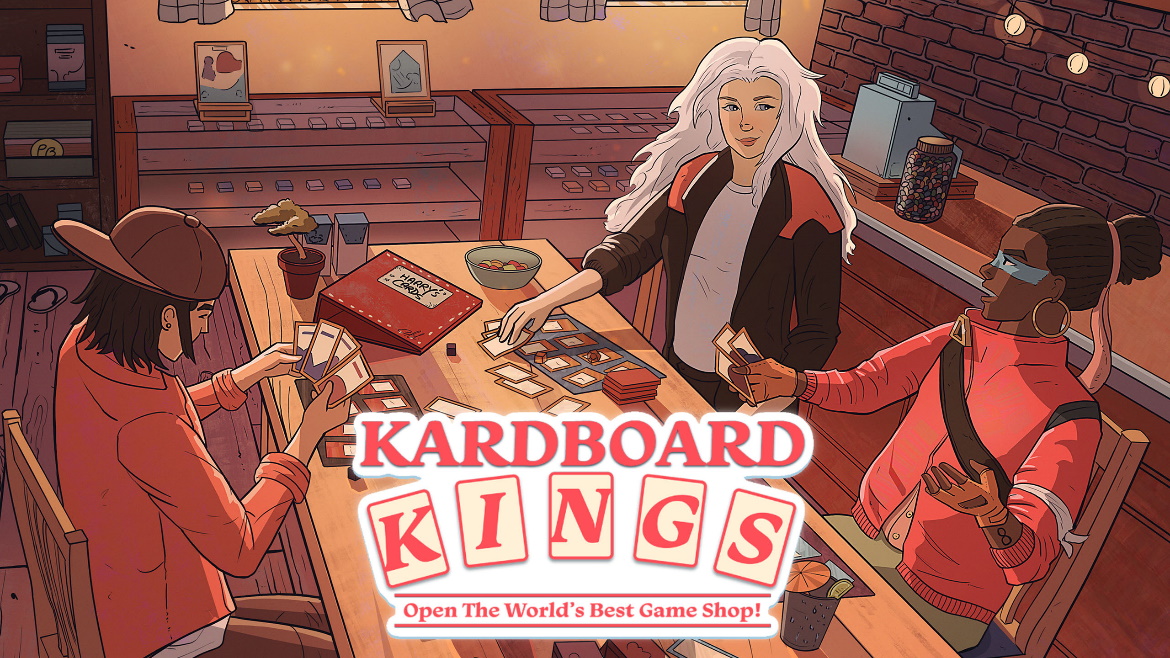 Disclaimer
This Kardboard Kings: Card Shop Simulator review is based on a Nintendo Switch copy provided by Akupara Games.