Our friends at Strictly Limited Games got in touch to announce that retro shoot ’em ups Dezatopia and Mecha Ritz are getting Limited and Collectors Editions on Nintendo Switch. Come check them out!

Set in a mechanized world, the story begins with a world-renowned young scientist named Veloce. One day she invented “Mecha” and eradicated humankind with her creation, recreating a metallic world filled with Mechas. Pilot humanity’s last hope, a Mecha imbued with human will, through the onslaught of enemy waves. Yet as the tides of battles turn and the world reveals itself, perhaps there’s more than what meets the eye.

With an FM Synth soundtrack and a distinctive visual design, Mecha Ritz: Steel Rondo combines retro aesthetics with modern sensibilities. Along with the simple controls, handcrafted stages and exciting unlockables, you will find yourself coming back for more.

Strange and unusual creatures inhabited Earth’s underground, unknown to humankind. This was until Momoko, a fashion-obsessed high school girl, accidentally discovered them. Together, they plotted to combine the civilizations above and below the surface to create a new world: Dezatopia.

The player controls Akane and Aoba, Momoko’s schoolmates who were hired to help start construction of the towering subterranean bridge until they discovered the extent of her plans. They decided to thwart the ambitions of Momoko and her loyal beasts with their work ship, the Speleological Fighter Pink Aurora.

The craft has four unique, intuitive weapons to fight back against enemies from all directions. Upgrades and items can also be purchased from a mid-flight shop, but these advantages are countered by a dynamic difficulty system that automatically adjusts to match the player’s skill level to ensure their experience, strategy, technique, and luck are always tested.

Each stage is filled with a variety of surprising gimmicks along with distinctive bosses that await at the end in massive machines. These are arranged in predetermined routes for high replayability. Detailed pixel art and smooth animation bring the underground backgrounds to life, and the retro familiarity of the FM synth soundtrack makes the original melodies memorable. It all combines for a truly vivid audio-visual spectacle.

The SLG Dezatopia & Mecha Ritz Limited Editions will come in two versions, each featuring a cover artwork focusing on one of the games in the collection, named Momoko and Veloce Edition as well as reversible cover artwork featuring both. Included is a colored manual for both games. The game cartridge included is the same. These are limited to 999 units each.

The Special Limited Edition will accordingly also be featured in 2 versions, with the artwork on the outer box being the same. These will be limited to 500 units each and contain the following items. 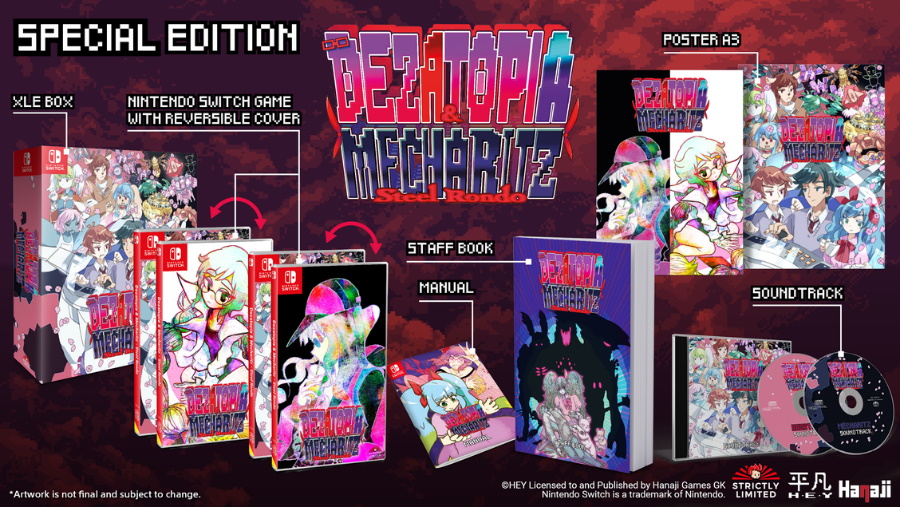 
You can purchase the Limited and Special Editions for this one by clicking right here.