Warpips from Daedalic Entertainment and Skirmish Mode Games is a fast-paced randomly generated strategy experience on PlayStation 5. Learn more in our Warpips review!


Warpips from Daedalic Entertainment and Skirmish Mode Games is a fast-paced randomly generated strategy experience on PlayStation 5. The developer describes the game as what would happen if a classic strategy game and a tug-of-war game had a baby made out of tanks and napalm, which sorta makes sense! It’s a physics-based game in which you’ll establish your army and try to beat your opponent as fast as possible while also using special attacks to try and tip things in your favor.

There’s no micromanagement in this one since you’ll only have to focus on making the most of your units and their abilities. Because of this, each randomly generated battle will take around 5-20 minutes to complete depending on which difficulty you’re playing on, and since you won’t be getting the same match twice, there’s a lot of replay value in this one. Move from your home base to capture other territories as you make your way to the enemy base. Defeat any opposing forces on the way, and destroy the enemy HQ to win!


In order for you to get the hang of things, I suggest that you check out the game’s tutorial. It’s there that you’ll learn all of the basics. You won’t be able to attack any territories that are not adjacent to the ones you already control, so be sure to pay attention to the map’s layout to plan accordingly. Knowing what the enemy lineup is will allow you to strategize to counter its efforts. Once you win a battle, you’ll be rewarded with additional units and resources so that you can improve your army.

Once in battle, you’ll use the left analog stick to move the camera around as you use your resources to deploy units from the available options at the bottom of the screen. You can use D-Pad or the right analog stick to cycle between them before purchasing units with the X button. As you defeat enemies, you’ll gain experience points and level up. By leveling up, you’ll gain a Combat Point, which can then be traded by pressing the Triangle button to gain some extra cash to purchase more units. There’s also the option of trading them for Pip Supply by pressing the Circle button, which will allow you to increase the size of your army. Combat Points can also be spent to improve your Cash button so that it generates more cash at a faster pace. 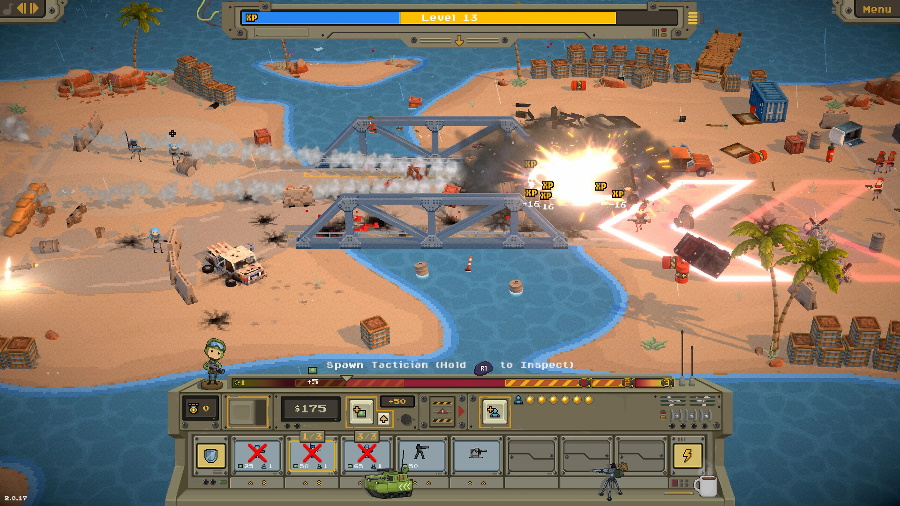 Each unit will have its own AI and will react as needed during combat. If it’s near cover, it will use it to lower the potential of receiving any damage during a skirmish. It will rush towards the enemy and use its main attacks and special abilities to try and turn the tide of battle. Every unit you can spawn will count since your resources are limited, and, in the end, the outcome of each battle can be decided by one unit if you time it just right! Boosting a unit’s rank by spending some Combat Points by pressing the Square button is also a viable strategy.


At the bottom of the screen, you’ll notice a bar for your army and for your opponent’s. If it’s red, that means that the enemy is getting ready to send a bunch of troops your way. Green means that the enemy is weak and can’t send any reinforcements right away. This is why as soon as you see that green bar, you should send as many of your units as you can to try and seal the deal and conquer the territory you’re currently attacking. Do pay attention to this bar because if it ever turns yellow, that means the enemy is sending its strongest units in a last-minute effort.

At the end of each battle, any resources or units you gain are added to your tally and are instantly consumed. Your army’s supplies are limited, and conquering new territories is the only way to replenish them and expand your army and its arsenal. Your odds of victory are dictated by which units you choose to deploy into battle and when so that you can be ready to not only conquer the next territory in your path but also think about what to do when attacking the one right after it.

You’ll decide what units to send into battle by entering the loadout screen. It’s there that you’ll equip units, items, and constructables, which will then be set to the deployment bar at the bottom of the screen. The deployment bar will be mimicked in battle as your hotbar from where you can spawn units during each operation. Since any unit, item, or constructable set to the deployment bar will be consumed, you need to so that you can pick the best combination for the next map while making sure you have enough to handle the one that will follow. 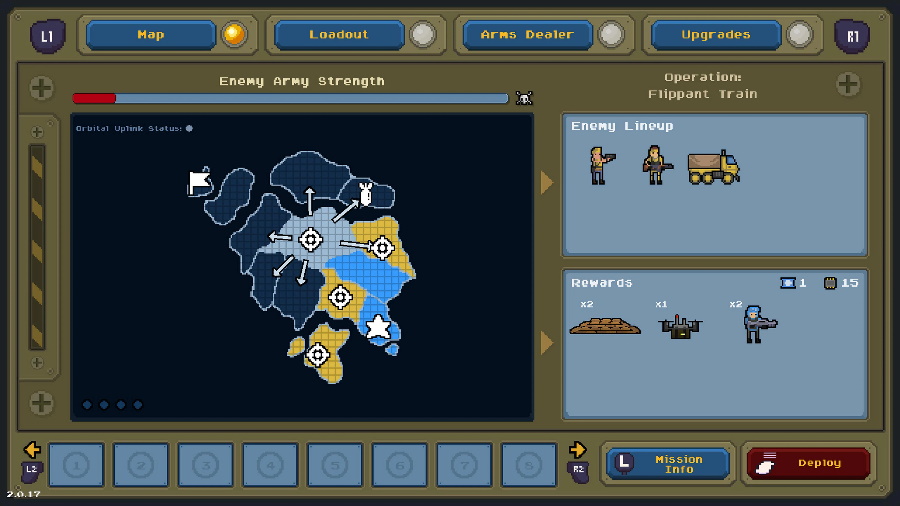 Items are single-use powerful objects that pack a punch, allowing you to call an airstrike or other mighty weapons into play. Constructables are offensive and defensive structures that you can build to give you a bit of an edge. Think of sandbags that you can use for cover, turrets that can shoot at enemies, or barbed wire that can keep them from storming your base. You can also combine these with your assault and defense buttons. By pressing and holding down the R2 button, you’ll give your units a speed buff while also increasing their accuracy. Press and hold down the L2 button, and your units will take cover while considerably increasing their range.

To balance things out, Warpips will place a cooldown on some units so that you can’t outright overwhelm your opponent from the start of combat. The good news is that this also applies to your enemy’s units! Take, for example, the mighty tactician. This unit plays a support role, so its purpose is to buff your main assault troops so that they can stand a chance against larger groups of enemies or against units that would otherwise be more powerful than them. They can also call in an air strike when the going gets tough.

And if you’re ever in serious need of an immediate cash boost, you can use your emergency button! What this does is sacrifice one Pip Supply for two minutes in exchange for money. This is why you should seriously consider this as a last option since having one less Pip Supply can put you at a serious disadvantage if you don’t execute this particular plan at the perfect time.

By progressing through the game’s Campaign and winning battles, you’ll be rewarded with War Bucks. These can be spent at the Arms Dealer to purchase combat coupons, additional units to be assigned to the deployment bar for subsequent battles, and even special units like the kamikaze drone, which can launch a swarm of explosive drones that will deal considerable damage to enemy units. 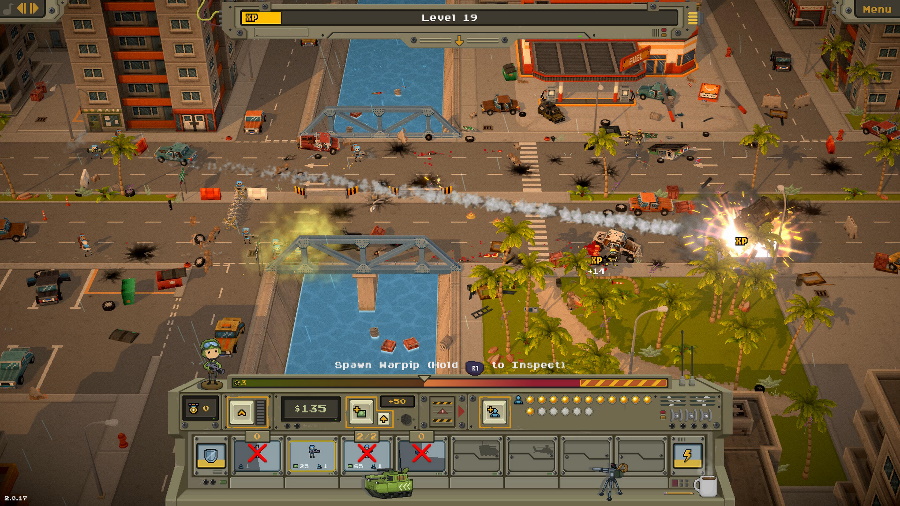 Warbucks can also be spent to purchase upgrades for your army. These include a bulletproof vest that can give all infantry units a small health increase, modular pieces so that all constructables cost50% less to build, improving your starting supply so that you can start with an extra Pip Supply, boosting how much experience points your army received for every enemy it defeats, or increasing your missile ammo, to name some examples. Checking which upgrades to purchase before taking on a new mission will be crucial if you want to survive.

The game has a full trophy list with a Platinum trophy, and you can add it to your collection once you unlock the 6 Bronze trophies, 8 Silver trophies, and 7 Gold trophies on offer. The first trophy you can get in this one is for completing the tutorial. After that, you can get trophies for capturing every territory in the Campaign, spawning 2,000 infantry, having Shield Pips take 4,000 in damage, capturing each island in the Campaign, defeating 150 enemies with missiles, defeating 500 enemies with turrets, getting 50,000, 100,000, and 150,000 points in Endless Mode. There’s one trophy for completing the Campaign in the General difficulty setting, which will probably be the one that will determine who manages to get this Platinum trophy. 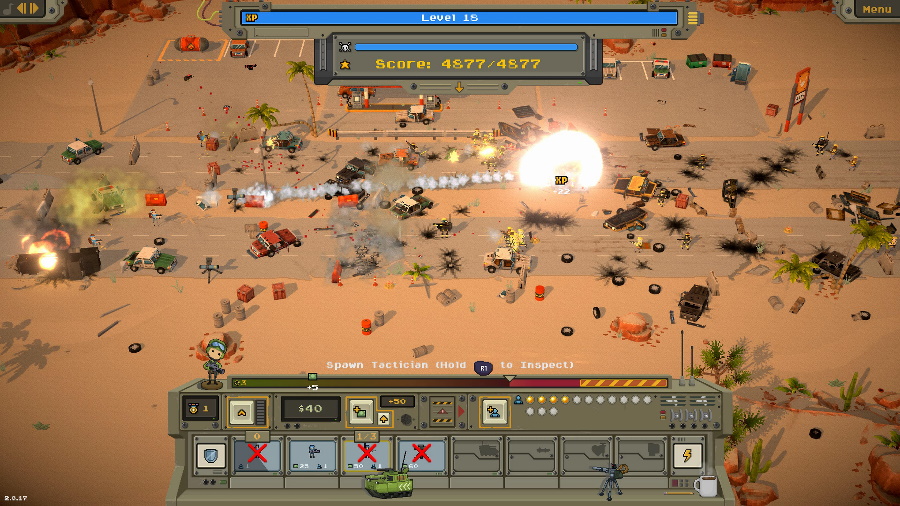 Warpips is a fun, fast-paced randomly generated strategy experience on PlayStation 5. There’s no micromanagement on this one since all you need to worry about is selecting your loadout and then using the money you earn in each mission to deploy your units, items, and constructables to try to win the tug-of-war battle. Units will act on their own, moving forward toward the enemy base, and taking cover as needed. Receive your rewards, and use those units, items, and constructables to keep the cycle going. Warpips is out on PlayStation 5 with a $19.99 asking price. There’s also a PlayStation 4 version available as a separate purchase. 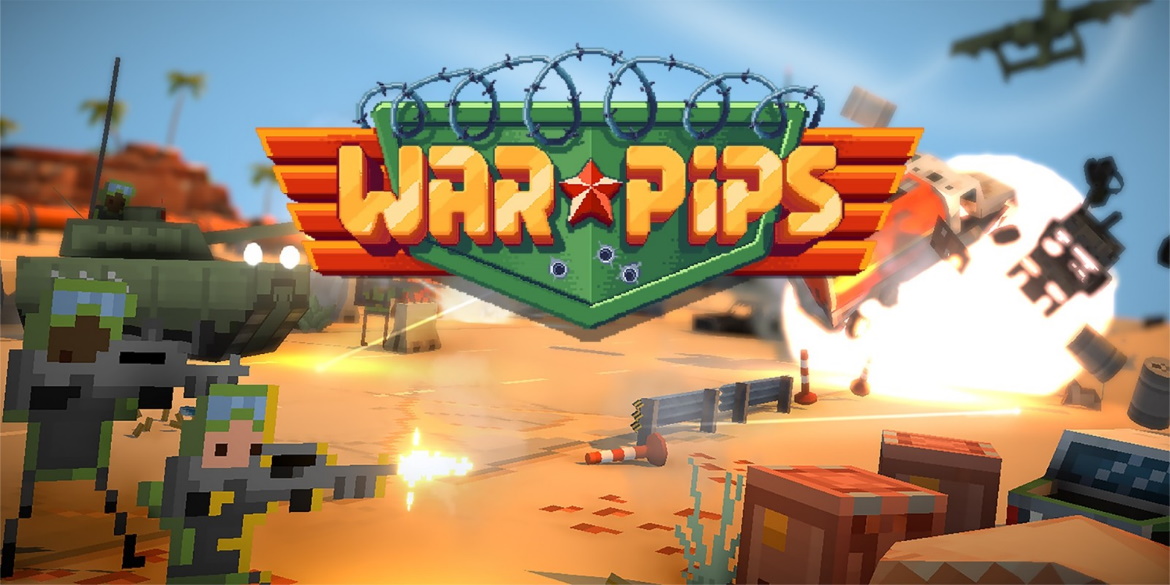 Disclaimer
This Warpips review is based on a PlayStation 5 copy provided by Daedalic Entertainment.