Smurfs Kart from Microids and Eden Games is a colorful and Smurftastic racer on Nintendo Switch. Learn more in our Smurfs Kart review!


Smurfs Kart from Microids and Eden Games is a colorful and Smurftastic racer on Nintendo Switch. Microids has been on a roll, releasing a bunch of games this year – the PlayStation 5 version of XIII, a revamped take on Arkanoid with a dash of battle royale in Arkanoid: Eternal Battle, and top-down action adventure Asterix and Obelix XXXL: The Ram From Hibernia. Eden Games is a developer that will certainly ring a bell for racing fans since it’s worked on several entries in the genre. These include V-Rally, Test Drive Unlimited, along with several games in the Gear.Club series – such as Gear.Club Unlimited 2 Tracks Edition on Nintendo Switch.

This one is clearly paying homage to the Mario Kart series, even having you collect an item – in this case, Smurfberries – to increase your total speed up to a maximum of 10 Smurfberries. The game can be played in single-player or in local multiplayer in one of the three game modes: Time Challenge, Free Race, and Gran Prix. Time Challenge will have you racing against the clock in Fun or Hyperspeed as you try to unlock all 36 Bronze, Silver, and Gold medals by getting the best time possible. Free Race makes it possible for you to select one of the 12 available racers as you race around each track in the game as you please. 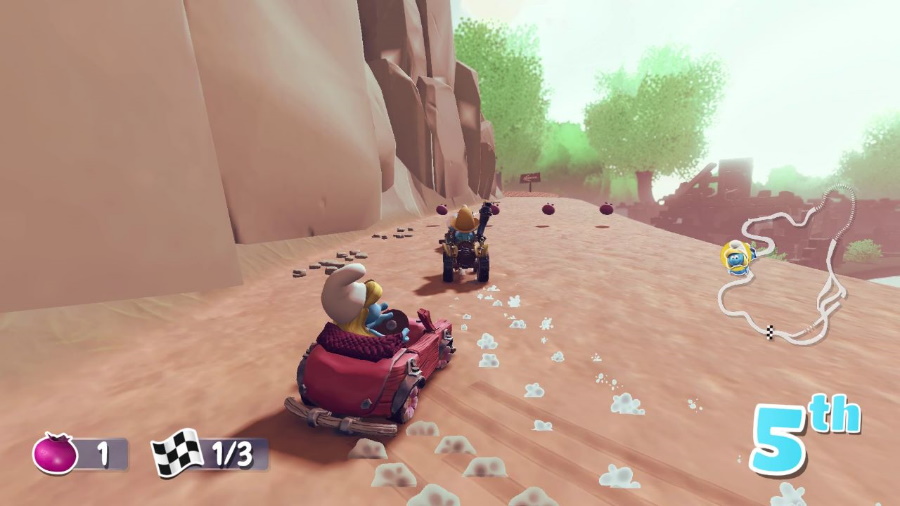 Gran Prix is the main event, where you’ll work on adding 9 Bronze, Silver, or Gold medals in one of the different cups – Village Cup (The Village Tour, Corn Fields, Beach Jumping, and Race Circuit), Forest Cup (Dam Under Construction, Forest Rollecoater, Bigmouth’s Rest, and The Fluorescent Caves), and Gargamel Cup (The Hazy Swamps, The Abandoned Garden, Chaos at Gargamel’s, and On the Roof with Azrael).


Smurfs Kart has 12 characters from the beloved Smurfs franchise: Papa Smurf, Smurfette, Hefty, Jokey, Storm, Handy, Clumsy, Blossom, Clockwork Smurf, Astro Smurf, Farmer, and Chef. Each of the Smurfs has its own vehicle, as well as a special Super Power that is unique to them. These special abilities include the mighty tornado attack from Clockwork Smurf, the surprise bomb gift from Jokey, or Farmer’s Smurfberries ability, which will allow him to harvest some sarsaparilla for a speed boost. 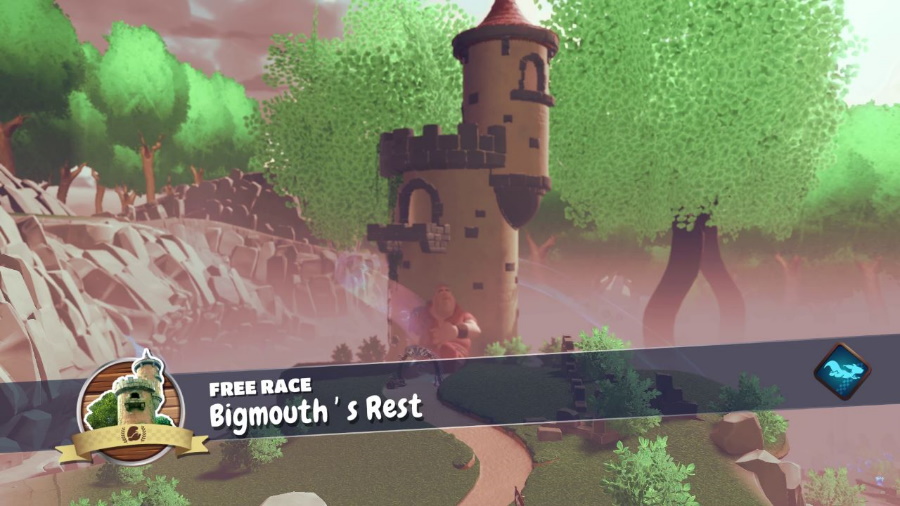 You’ll steer your kart with the left analog stick or the D-Pad, accelerating with the ZR or A buttons and braking with the ZL button as needed. You can use a Smurf’s special ability by pressing the L button. Additional abilities can be collected by grabbing the mystery present boxes, and you can carry up to two abilities at any given time. What are the abilities you can get? Along with each Smurf’s main ability, there’s a special leaf that makes you go extremely fast, acorns that you can throw at opponents to make them slow down, a bee that acts as a homing attack, a bubble that will protect you from a hit, or a multirocket attack!


At the start of each race, you can time your acceleration so that the arrow on the gauge ends up in the green right as the start is about to begin. This will reward you with a starting turbo boost that will make a big difference since it will allow you to get an advantage over any other Smurf that didn’t manage to activate their turbo. There’s also a pair of yellow areas around the green one, which will give you a shorter but still important boost. When taking on each track, you will need to pay attention to the spots where you can go over turbo squares that will increase your overall speed. And when going over ramps, if you pay attention and go over the blue arrows and jump with the ZR button, you’ll be able to get a speed boost as well. 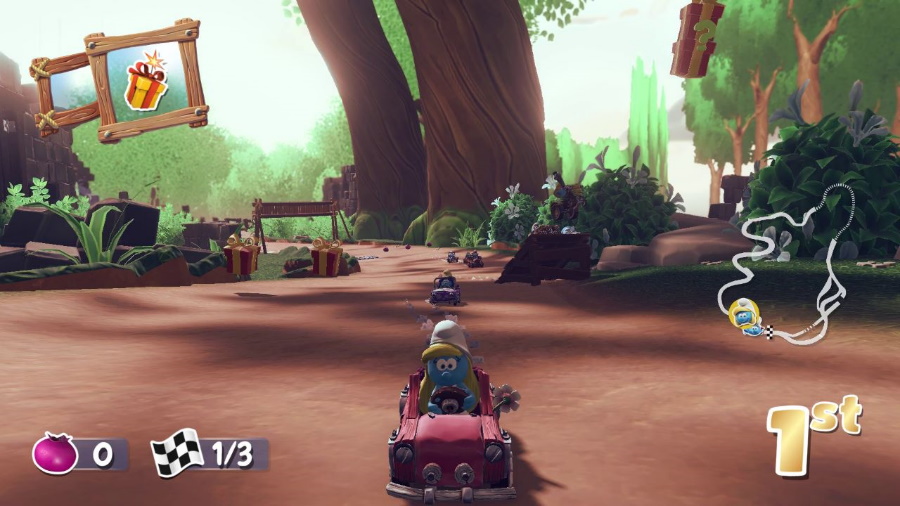 To make it possible for gamers of all skill levels to enjoy their time with Smurfs Kart, there’s a trio of options that will enhance the experience for gamers of all ages. You can activate a smart steering mode to make it easier for gamers to drive around each track. There’s also a tilt control option so that a racer doesn’t steer too far from the main path. The last one is an auto acceleration option which, as its name suggests, will make it possible to have a racer automatically accelerate at all times.


There are 110 stickers to unlock during your time with Smurfs Kart. A big chunk of them will be unlocked by collecting Smurfberries (5, 50, 150, 300, 500, 1,000, 1,500, 2,000, 2,500, 3,000, and so on up to 10,000 Smurfberries. Along with that, you’ll work on completing 5 and 20 races as each of the available characters, unlocking the different medals you can get during each race, making the podium in each of the different cups, winning each cup in mirror mode at the highest speed setting, and gaining all of the gold medals while racing against the other Smurfs. 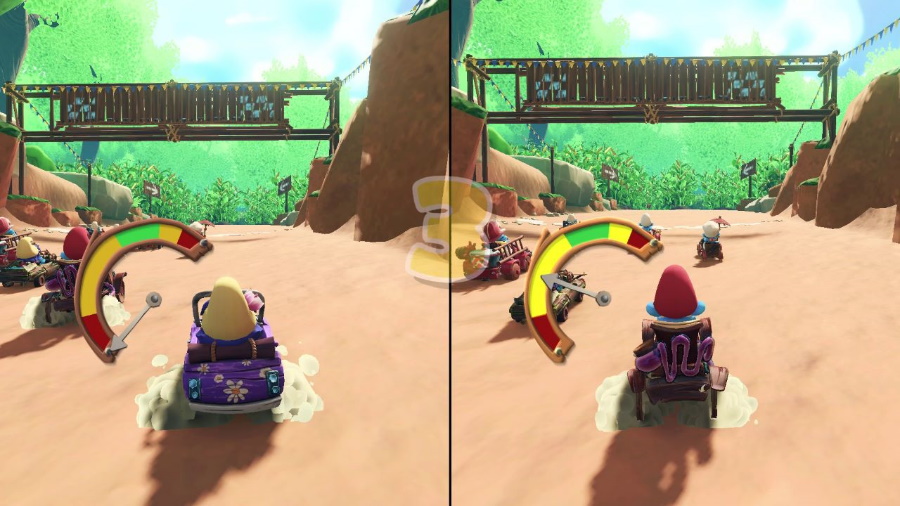 If you’re a fan of the Smurfs and are looking for a new kart racing game on Nintendo Switch, then Smurfs Kart is the perfect combo for you. You’ll get to race on 12 tracks as 12 characters from the franchise – Papa Smurf, Smurfette, Hefty, Jokey, Storm, Handy, Clumsy, Blossom, Clockwork Smurf, Astro Smurf, Farmer, and Chef – in three different modes (Time Challenge, Free Race, and Gran Prix) with some accessibility options so that gamers of all skill levels can take this one for a spin. Smurfs Kart is out on Nintendo Switch with a $39.99 asking price. 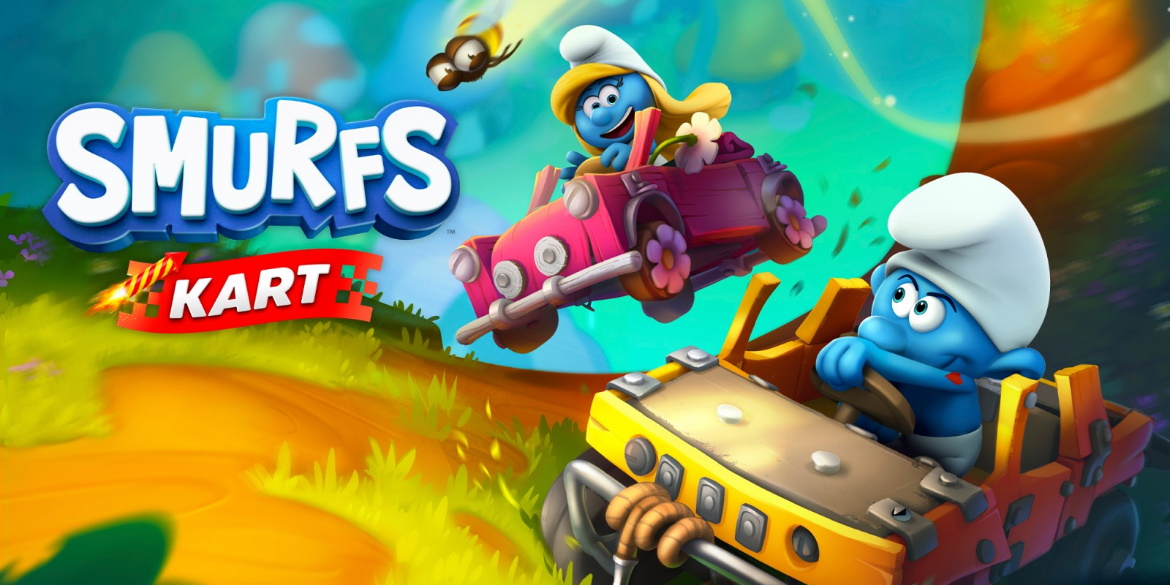 Disclaimer
This Smurfs Kart review is based on a Nintendo Switch copy provided by Microids.