Sea Horizon from eastasiasoft, Softstar, and 45 Studio is a roguelike turn-based hex RPG on Nintendo Switch. Learn more in our Sea Horizon review!


Sea Horizon from eastasiasoft, Softstar, and 45 Studio is a roguelike turn-based hex RPG on Nintendo Switch. It offers randomly generated scenarios presented with a minimalist art style in which you’ll make the most of the cards in your hand as you rely on the luck of the dice roll to survive through each battle. Every action will matter, so you need to make sure that every choice you make is the right one. It reminded me at times of Roguebook and Faeria from Abrakam Entertainment, which is not a bad thing!

There are three different modes to play this one: Story, Dungeon, and Exploration. For Story, you’ll get to experience the stories of the ten different characters you can play as. Your time with Story will start with a first quest where you’ll get to learn the basics. Dungeon will throw you into a dungeon in which you must make the most of the three characters in your group to try and defeat the boss. The last one is Exploration, which allows you to freely explore the map with three characters.

You’ll be exploring a hex-based map where new nodes will be revealed to you as you progress further. Since the word sea is right there in the game’s title, that means you’ll be exploring some sea hexes during your time with this roguelike deckbuilding RPG. As long as you find yourself a boat and board it, the world is your oyster! You’ll move your character on each map with the left analog stick or the D-Pad as you select what hex it should move to, and then confirm said decision by pressing the A button. 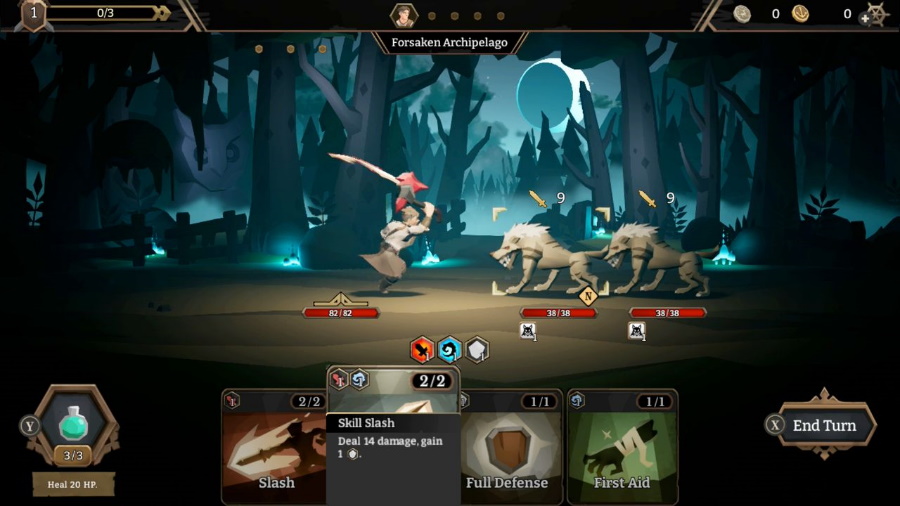 In the upper right part of the screen, you’ll have your Sanity meter. You need to pay attention to it at all times since it establishes the limit of your exploration since it’s tied to food, which is a very important resource. Why is that? Because if you run out of food, then it’s game over! Because of this, you need to pay attention to the layout of each map that you explore so that you can find ways to increase your overall food count. You might need to spend some coins to buy more food, complete an objective, or enter a difficult fight.


On the left side of the screen are the hit points (HP) for your characters. Run out of HP, and that character is done. Visiting a camp is an excellent way to get some extra food for the group, as well as to help them recover and heal their wounds. The healing part will also require you to spend some coins. The more fights you complete, the more extra coins you’ll receive, so it’s always a good choice to take on as many enemies as possible.

When you enter battle, the perspective will shift from a top-down camera view to present a side view of the action. Once in a fight, you’ll have to use the roll of the dice to determine the cards you’ll be able to use for that turn. The rolled dice will be converted into different resources, which will, in turn, change how you approach that particular battle. Say you want to your enemy. If you roll a red sword with the dice, then you can spend that resource to activate the Slash card. Roll two red dice, and you can then attack twice in a row! And don’t neglect to block since, for Sea Horizon, block values will carry between rounds. 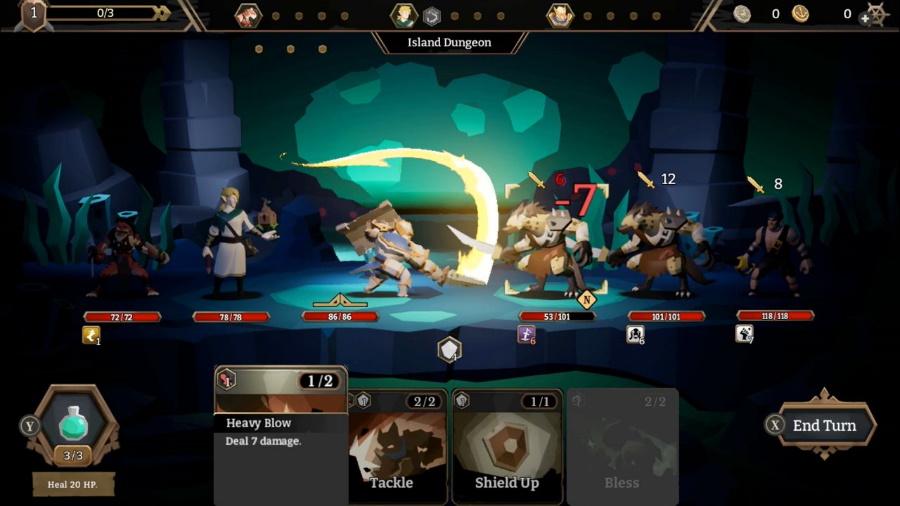 Win a fight, and you’ll be rewarded with loot. This includes different potions that you can put to good use – like, say, a nature potion that will reward you with three points of nature right away and then three additional points for your next turn – as well as runes that will grant you a special effect. You can also choose from weapons, shields, and armor or decide not to grab anything and instead receive some coins for your efforts. Coins are useful since you can spend them at merchants to grab some extra stuff and diversify your loadout. You have a limit on how many cards you can bring to battle, so be sure to update your deck as you gain new skills. On top of that, you must always be aware of what you can actually use based on the potential dice rolls from each character’s equipment.

Since there are ten different characters in Sea Horizon, there’s plenty of variety. There’s Dylan the Adventurer, who has lost his memory and has arrived at the Forsaken Archipelago after accepting the commission of the Nightwoods Elder to stop the raging Nephteus. Then we have Lyra, the Wanderer. As a Crimson Tiger, she must seek the escaped Envoy of Nephteus and return the Talisman before it’s too late. Another character is Ricky Musketeer, the Explorer. He’s traveled thousands of miles to the Forsaken Archipelago to try and make a fortune.


To add to the replay value, there are some bonus costumes for you to unlock for each character. Doing this will change the way they look in-game while also providing an additional skill. Say you unlock the Ultramarine costume for the Adventurer. Wearing the Ultramarine costume will give you access to the Sword Swing card, which will deal 12 damage to an enemy, along with an extra 4 points of damage for each red resource you roll. And if you unlock his Chef costume, then you will get the Shield Heal card, which heals 16 GP while also rewarding you with a red resource! 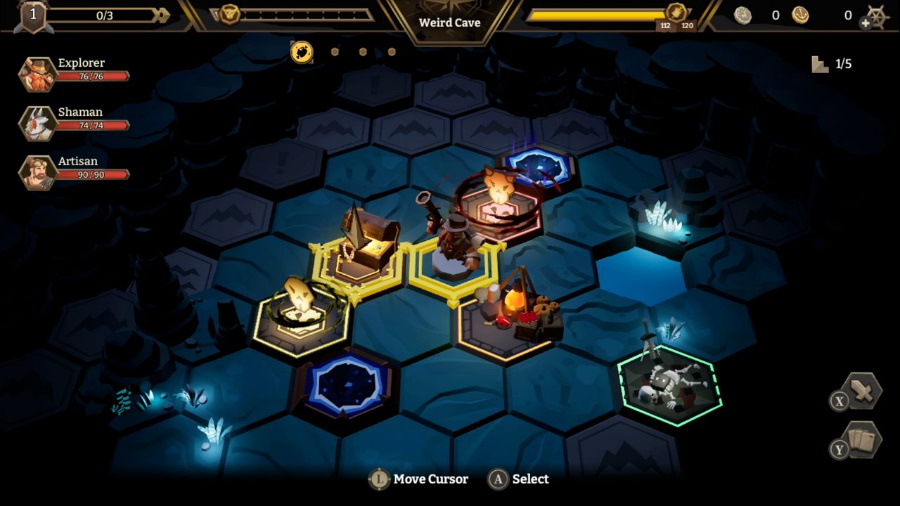 As you progress through each run and win fights, you’ll get a chance to level up for that run. When you do level up, you’ll be able to choose from a group of skills to add to your card collection. Choose wisely since they will prove to be very useful for subsequent battles! Each character will be able to equip a weapon, another item for its remaining hand – something useful like, say, a shield – a piece of armor, an amulet or a trinket, and a potion. Said potion could be of the healing variety or something else that could be a spit spicier – like a fire potion that can deal 30 damage.

You can’t just rush through a run and expect to be victorious, so you will certainly get to see the game over screen more than once. By completing some miscellaneous objectives and defeating as many enemies as possible during each run, your character will receive experience points that will help it permanently level up. By leveling up, you’ll unlock special enchantments for future runs, as well as additional skills that will be waiting for you as soon as you give things another go.


After a game over, there’s also the option of making the most of how you can take with you one piece of equipment for the next run, as well as select one blessing from a set of buffs – or even choose to carry on with no special buff at all! Going into the next run with a powerful piece of armor that grants 16 points of block at the start of each fight can make a huge difference. As for the blessings, they include stuff like Survivalist, which will reduce the amount of food consumed with every step you take, Well-Stocked, which will grant you four vials of healing potions, or Foodie, which will increase your max Satiety by 20. 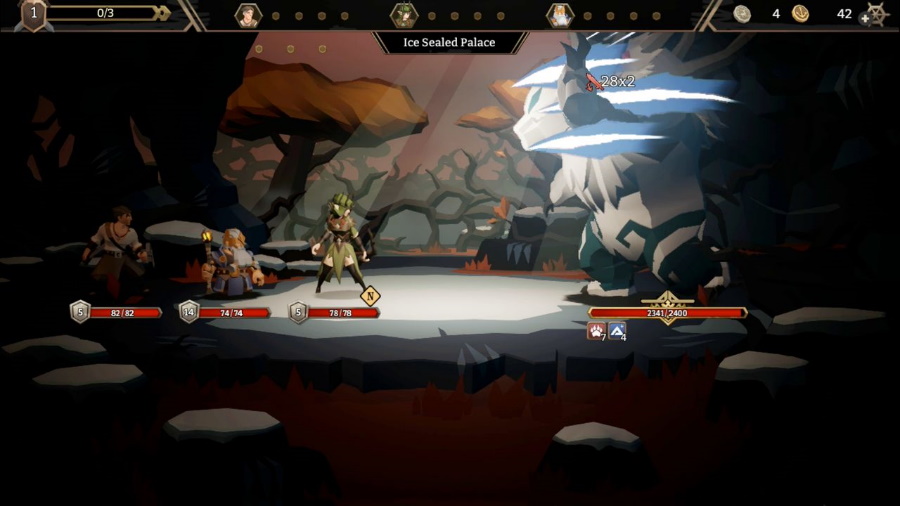 Sea Horizon is a roguelike turn-based hex RPG that is a lot of fun on Nintendo Switch. It offers a streamlined deckbuilding experience with Story, Dungeon, and Exploration Modes, ten characters with different loadouts, and gameplay mechanics to consider – weapons that take two slots, being able to equip a shield, having easy access to looping healing cards at a lower damage output and more – that will keep you busy for a while, as you try to prepare for heavy damage rounds by stockpiling some block and adding thorns to your character – if available – to turn the tide of battle. Sea Horizon is out on Nintendo Switch with a $14.99 asking price. 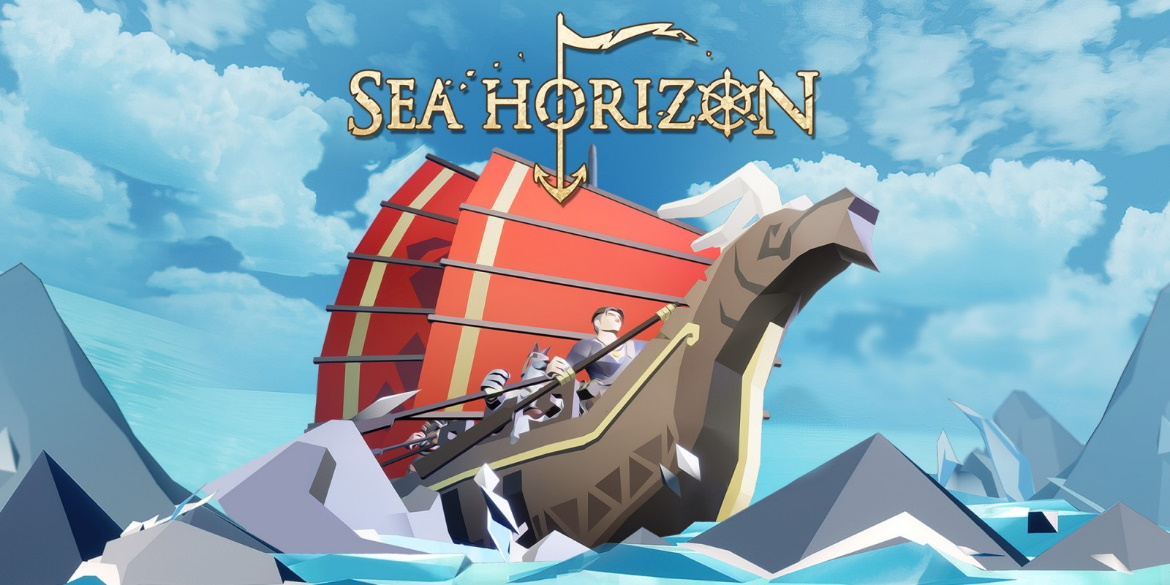 Disclaimer
This Sea Horizon review is based on a Nintendo Switch copy provided by eastasiasoft.