Garfield Lasagna Party from Microids and Balio Studio is a colorful party game starring everyone’s favorite cat who hates Mondays… and loves lasagna! You’ll be playing as Garfield, Odie, Arlene and Nermal as they take on more than 30 mini-games for the titular Lasagna Party, as they try to be number #1. Your skills will come into play, but you’ll also need a bit of luck since you’ll be throwing dice and making good use of the random special items you can collect to gain an advantage over your opponents. 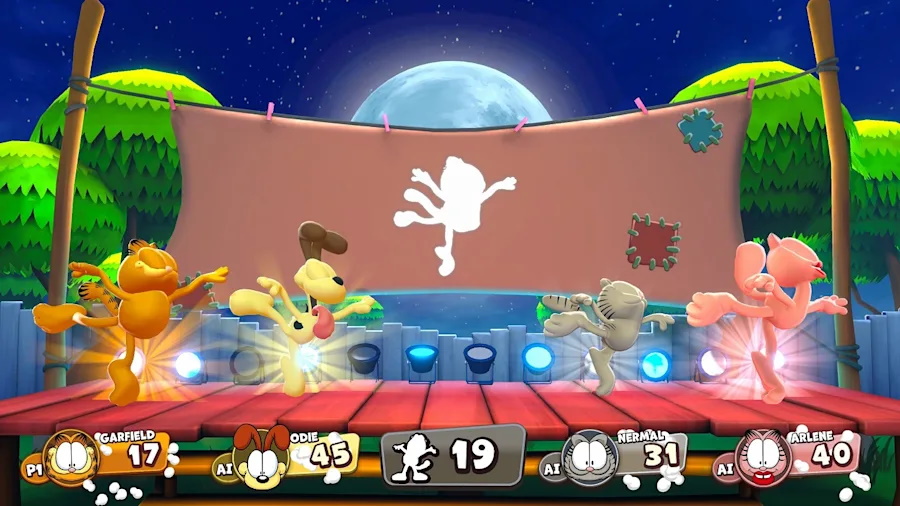 There are three different ways to play this one: Lasagna Race, Lasagna Challenge, and Lasagna World Tour. For Lasagna Race, you can select the difficulty, game duration, and number of players. In Lasagna Race, the objective is to obtain as much lasagna as possible by the end of the game. You’ll play on a board and the roll of the dice will decide what items you collect, bonuses you receive, or the cards that are drawn. After rolling the dice, each player can use one of its items. The last player to roll the dice will also get a bonus to improve or protect their throw, or choose to repeat it. You have 10 seconds to decide what to do, and if time runs out, then you won’t make any choice.


What are the items that you can use? There’s a hot dog that will allow you to move two extra slots, a hamburger that makes it possible to move five extra slots, a sandwich that protects your throw from being penalized by the items used by other players, a spicy pepper that can eliminate 3 moves form your opponent, and more. There are two types of random cards to draw. The blue ones can grant a bonus to all players or penalize all of your opponents. The second set will provide a bonus to or penalize only you. By spinning the roulette, you can win coins, lasagna, or win a chance to roll the dice. You do need to be careful since you can also lose some coins! You can also draw a super dice from some spots. This is a mighty dice that, when rolled, will have numbers that go from 5 to 10. 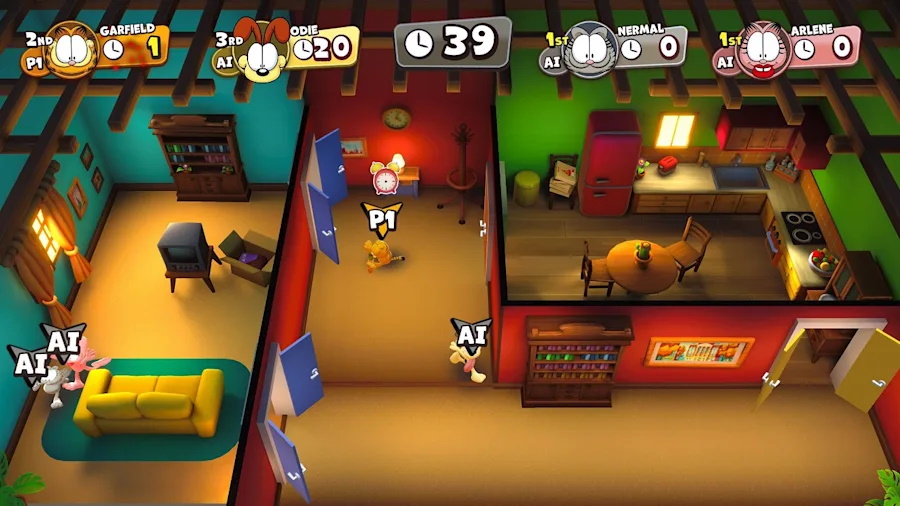 At the end of each turn, a mini-game will begin. These can include a variety of activities, such as placing objects in the right spot to win points, trying to throw as many pizzas as possible into the open ovens before time runs out in order to score the most points, escaping from a horde of dogs as you jump over obstacles or slide below them, standing on top of a giant snowball for as long as possible, slicing a pizza so that the same amount of pepperoni is left on each pizza slice, getting rid of an alarm clock as quickly as possible, or playing the right notes at the right time, to name some examples.


When going through the starting point again, you’ll win two lasagna and two coins. If you land exactly on the starting point, then you’ll get double the prizes! The coins that you collect can be spent at the store spots on the board. What can you buy with coins? You could purchase some fish bones to force an opponent to roll its dice again, a chili pepper to remove two moves from an opponent’s throw, an eraser to eliminate the effect of a spot, or purchase the hotdog, burger, or sandwich I mentioned before. 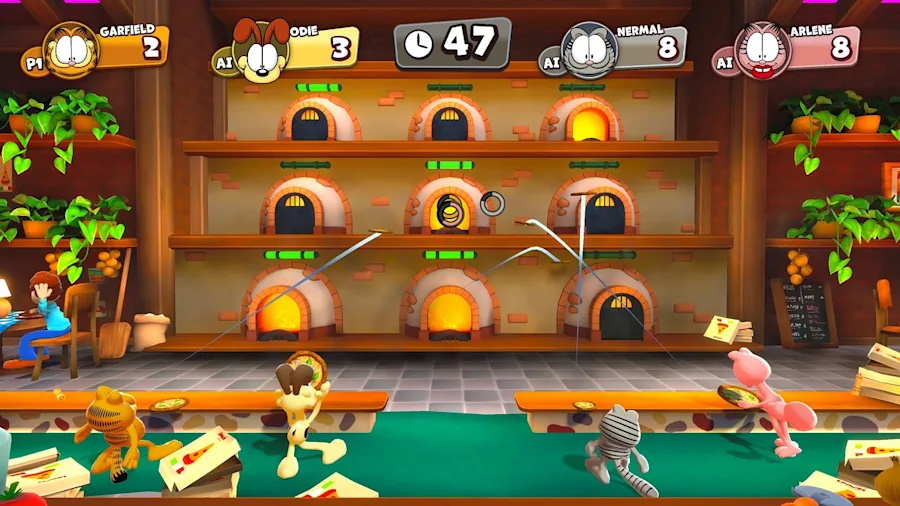 In Lasagna Challenge up to four players can play through the many mini-games in Garfield Lasagna Party without having to take on the whole boardgame part of the equation, which is a good option if you want to dive into a quick gaming session. In Lasagna World Tour you will pick the difficulty, number of mini-games you’ll take on, and the number of players. By doing this, the game will randomly select the next game to play, all while increasing the speed to boost the overall challenge.


If you’re looking for a party game on Nintendo Switch with a heavy dose of Garfield followed by a side of Garfield, then Garfield Lasagna Party is exactly what you’re looking for. It offers three different game modes and 32 different mini-games to play as Garfield, Odie, Arlene, or Nermal, offering a nice variety of gameplay mechanics. Garfield Lasagna Party is out on Nintendo Switch with a $39.99 asking price. 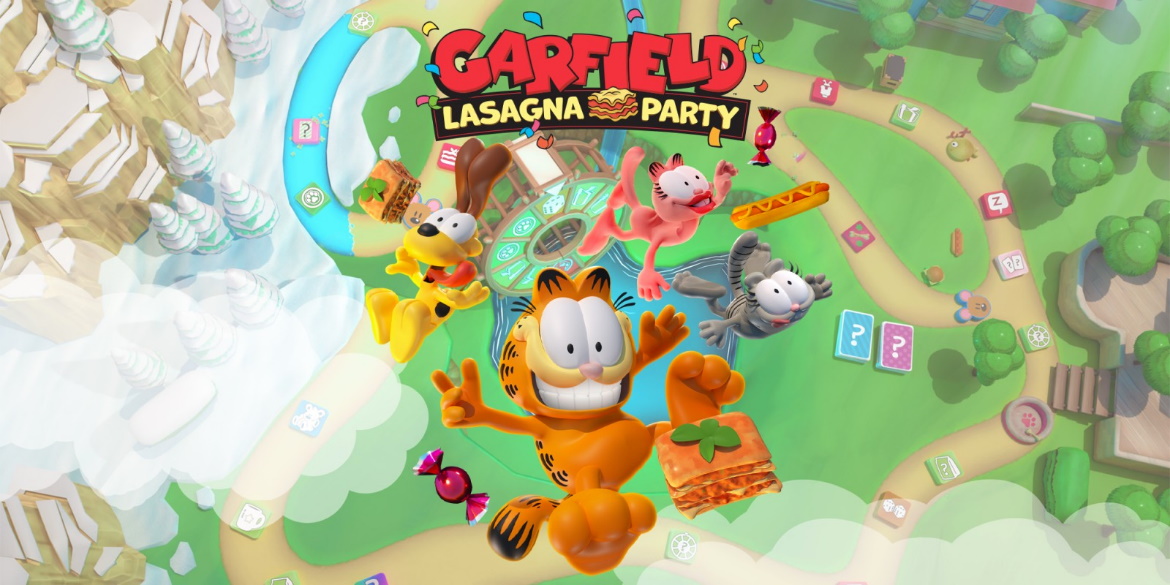 Party game with a heavy dose of Garfield

Disclaimer
This Garfield Lasagna Party review is based on a Nintendo Switch copy provided by Microids.