FALLING OUT from Firestroke and PolyCrunch Games is a charming 2D roguelite with a Spelunky vibe to it. Learn more in our FALLING OUT review!


FALLING OUT from Firestroke and PolyCrunch Games is a charming 2D roguelite with a Spelunky vibe to it. You’ll be playing as Giorgio and Felicie as they go on a new trip since they’ve won a second honeymoon! The prize they’ve won includes first class tickets and accommodations – how fancy! Unfortunately, once they arrive in Egypt and visit one of the pyramids, they end up splitting from the rest of the group of tourists after taking a selfie. And what happens next? They awaken an ancient spirit! To fix things, four talismans must be collected before the spirit does, or else the world will end! 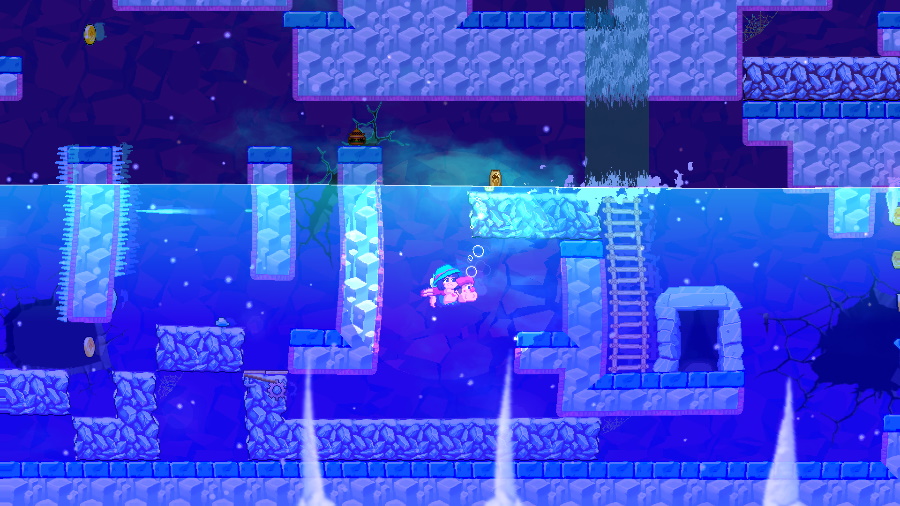 As you explore each world, you’ll be able to choose what path to take, with each subsequent room presenting a randomly generated challenge to overcome. You’ll have to always rush towards the exit as quickly as possible, because if you spend too much time on a level, it will flood! As you can probably imagine, drowning is bad for you. There’s also the risk of running into a curse or two while you explore each level while you open up the treasure chests you find, but at least you’ll get some extra coins to spend at the store – more on that in a bit.


You’ll control a character with the left analog stick, jumping and double jumping with the B button, and performing an action with the Y button. You can grab the other player and throw them as needed to get out of any of the many predicaments you’ll find yourself in by pressing the Y button again, or drop them by pressing the A button. When standing on higher ground, you can press the Y button to drop down a rope that they can use to climb. If playing on your own, you can change between characters with the ZR button. To bring the other character to your location, all you have to do is whistle by pressing the ZL button. 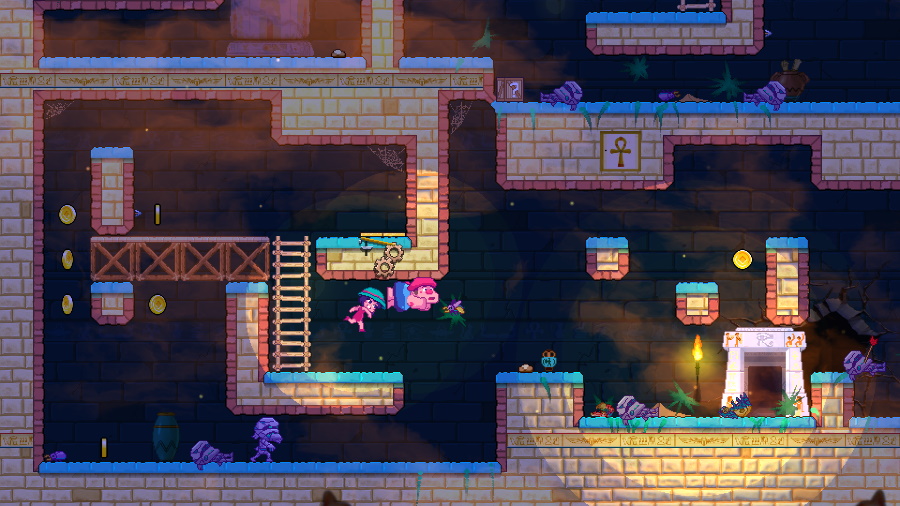 If you grab an item while in a stage, you’ll be able to either use it with the A button, or press the X button to store it in your inventory. You can then bring it out of your inventory and drop it by pressing and holding down the A button, which can prove to be useful when you need to, say, activate a floor plate to remove some spikes that won’t allow you to progress further in a level.


The coins that you collect can be spent at the merchant’s shop… Azar’s Bazaar! You can buy a variety of items to help you on this quest. You could, for example, purchase the Zapper, which can be used to defeat enemies from a safe distance, a teleport that will take you back to the start, a gramophone that can put enemies to sleep, an invincibility statue, a health pack to restore one lost life, a heal potion that will gradually restore your health, an extra life that will, well, add an extra life to your total count, an extra glow stick to expand your field of view, a pair of flippers so that you can swim like a merman, a land mine to make enemies go boom, or a banana gun that will allow you to shoot bananas. 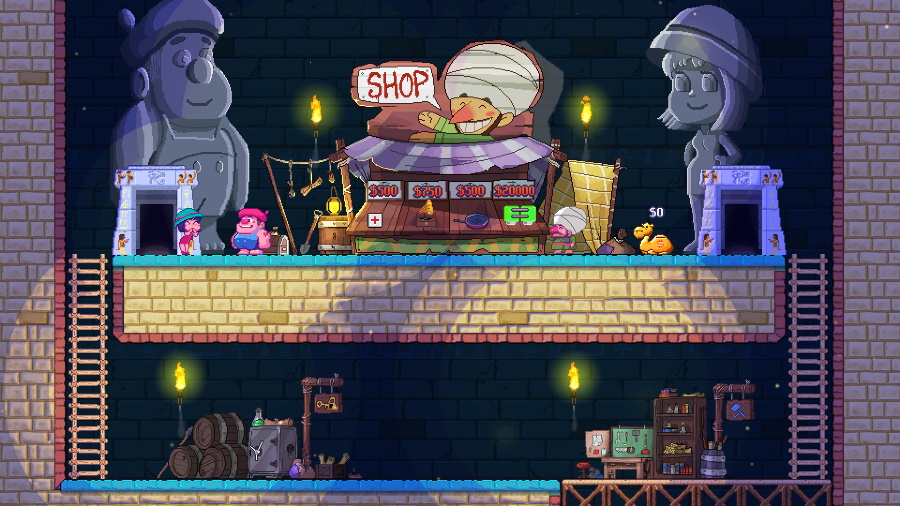 You can store your coins at the camel bank to keep them safe… for a fee. The merchant will take a 10% fee on top of what you save up, but at least when you’re defeated, you’ll know that the money in the camel bank won’t be lost. Something else that Azar can do for you is turn any stone tables that you find into blueprints. Blueprints are important, since they will allow you to craft weapons. Search for scraps during your adventure so that you can use for said crafting projects.


There’s an in-game achievement system you can work your way through as you play FALLING OUT. The first one you can unlock will be for completing the game’s tutorial. After this, there are more than 40 additional achievements. The objectives to complete include defeating one of every enemy in the Egypt, Maya, Antartica, and the Underworld, defeating 10 enemies by throwing your partner at them, defeating three enemies with one dynamite, spending 500,000 coins in the shop, saving up at least 50,000 coins, completing any level in co-op, crafting a bunch of items, or opening 100 chests, to name some examples. 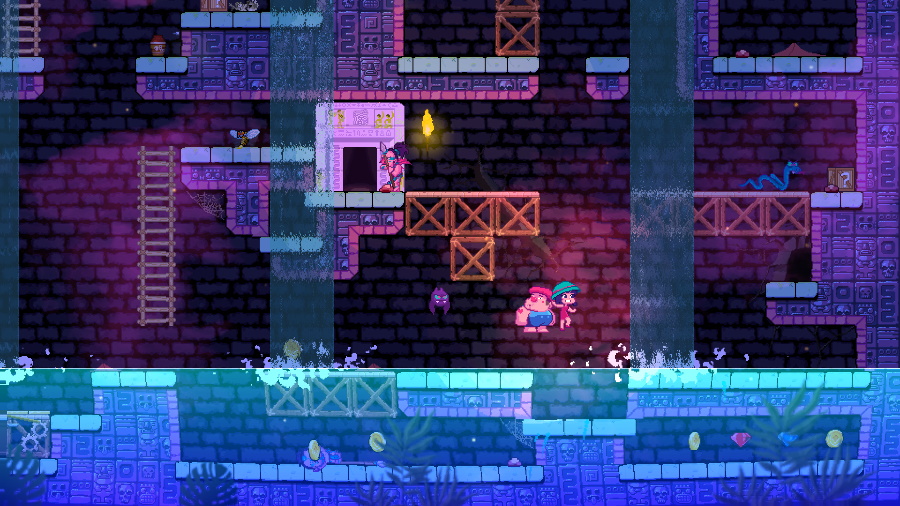 FALLING OUT is a charming 2D roguelite with a Spelunky vibe to it that is a lot of fun on Nintendo Switch. You’ll need to give it your best during each run as you try to complete each stage on your path without drowning in the process… or being skewered by an arrow. Or stung by a giant scorpion. Or bitten by a mummy. You know, the usual. FALLING OUT is available on Nintendo Switch with a $14.99 asking price. 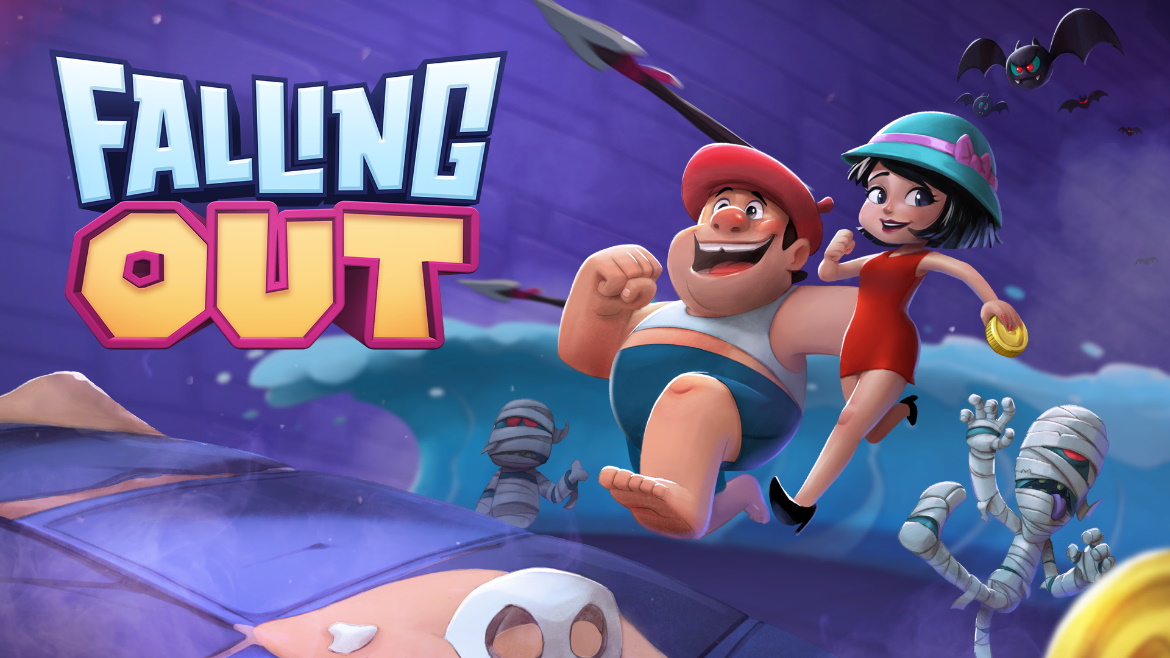 Disclaimer
This FALLING OUT review is based on a Nintendo Switch copy provided by Firestroke.