BPM: Bullets Per Minute from Playtonic Friends and Awe Interactive is a first-person shooter rhythm game in which you take on the role of a Valkyrie. This is a roguelike experience in which you must attack, reload, jump, and dash in time with the beat as you battle against the forces of the underworld. Explore randomly generated dungeons, find as many weapons and items as possible to help you survive, and try to make it to the end of that level to defeat the bad boss. Defeat all bosses, and you’ll get a shot at the big bad boss. 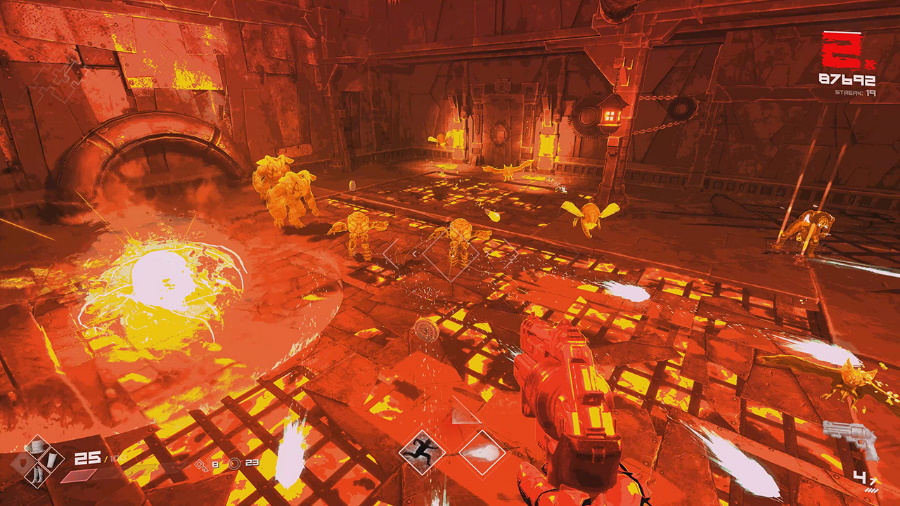 I recently reviewed Metal: Hellsinger on PlayStation 5, which has certainly been inspired by what this game did a couple of years ago on Steam, so I was definitely up for checking out what BPM: Bullets Per Minute had to offer on Nintendo Switch. Since this release includes the Overdrive update, you can now play BPM in one of four difficulty settings: Practice, Easy, Hard, and Hellish. Music and sound are very much a big part of the BPM experience, so playing with the volume dialed up to 11 – or while wearing headphones – is highly recommended.


Because of this, before you can get started, the game will present to you a pair of latency tests for video and audio in order to adjust itself accordingly. It also suggests that you activate the Game Mode option if your TV has one, as well as a Game Mode for audio if there’s such an option on your setup. You’ll control the Valkyrie with the left analog stick and look around and aim with the right one. The ZR button will be for firing your weapon, while the ZL button will be for the secondary ability. The R button is used for reloading, and the L button is for dashing. You can also jump with the B button – and double jump on the offbeat – use an item with the Y or A buttons, and unleash your Ultimate Ability with the A button once it’s charged up. There’s also the option of playing by using motion controls. 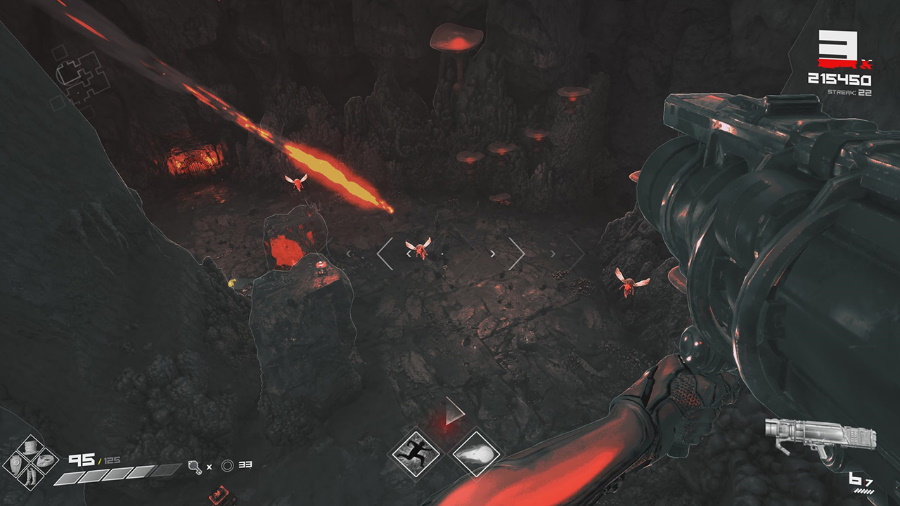 There are ten different Valkyries in total to play as, but you’ll first need to unlock them by playing BPM. You’ll start with Göll, the most balanced of all Valkyries, with 100 HP and a pistol as its main weapon. Complete specific levels, as well as some miscellaneous objectives – defeating 2,000 enemies, spending 1,000 coins in the armory – and you’ll gain access to the rest. There’s Freyr, who starts with no HP but has 150 armor and a revolver. Select Hildr, and you’ll have 50 HP, 25 armor, a shotgun pistol, a key, and five speed-boosting items.


Since each level is procedurally generated, you’ll be dying a lot during your time with BPM: Bullets Per Minute. There’s going to be a lot of trial and error in your future since there’s no way of knowing what you’ll be running into. You must pay attention to the map on the upper left corner of the screen at all times so that you can see what rooms you’ve visited and if you’ve stepped into a special type of room. 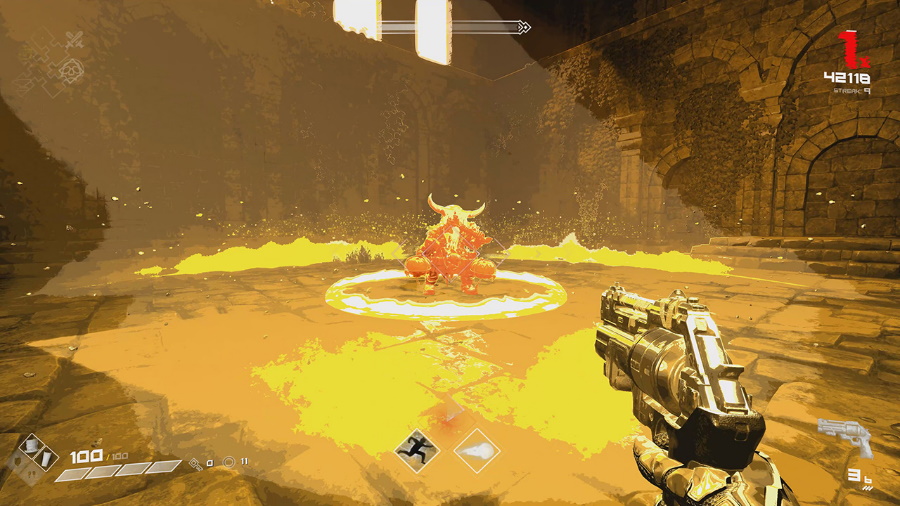 What are the special rooms in the game? They include Munnin’s armory (marked by an anvil on the map), where you can purchase weapons and stat items. The more you spend at Munnin’s, the better the items you can get during subsequent runs! You can also enter a bank (marked by a scales icon), where you can deposit or withdraw coins as needed to keep them safe between runs. Find an icon with crossed swords, and you can go into a challenge room where you can gain access to a treasure chest by defeating each wave of enemies.


There’s also the well room (which is shown on the map as a sparkle) where you can collect an equipment item to aid you from the available options. A treasure room (yes, it shows on the map as a treasure chest) will always spawn a special treasure chest for you to collect. Visit Huggin’s shop (which is a banner icon on the map), and you can use your coins to purchase healing potions, boost your health, purchase keys, and more! There’s also going to be a boos room (a skull on the map) where you’ll battle the boss for the dungeon before being able to enter the portal that will take you to the next one.

To keep the game’s framerate as smooth as possible – which is a must for a rhythm first-person shooter – a compromise had to be made, and that’s why, as you can tell from the trailers and screens for this BPM: Bullets Per Minute review, the game looks a bit rough on Nintendo’s console. Mind you, a game running at a lower resolution on Nintendo Switch is not news, but it is something to consider in the case of this particular release due to its high-contrast look, which is accentuated by the lower resolution. 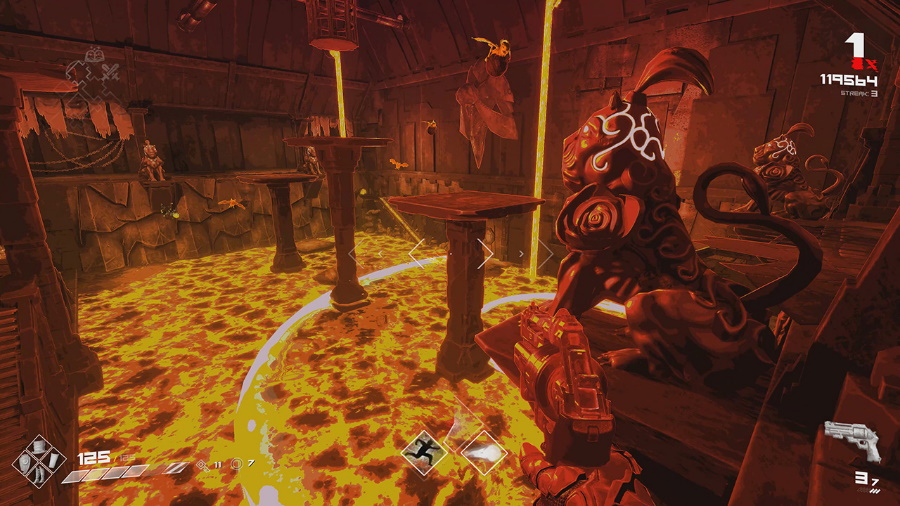 Overall, BPM: Bullets Per Minute is a fun and challenging first-person shooter rhythm game with a dash of roguelike thrown in for good measure. The game can be as challenging as you want it to be since it offers four different difficulty options so that gamers of all skill levels can have a shot at seeing what the game has going on for it. And because of its procedurally generated nature, there’s a lot of replay value in this one, but the mix of roguelike elements, a first-person shooter, and a rhythm game means that this one is not going to be for everyone. BPM: Bullets Per Minute is out on Nintendo Switch with a $24.99 asking price.

Disclaimer
This BPM: Bullets Per Minute review is based on a Nintendo Switch copy provided by Playtonic Friends.