Arkanoid: Eternal Battle from Microids and Pastagames brings us a new take on the beloved brick-breaking TAITO classic on Nintendo Switch. Arkanoid was originally released way back in 1986 in arcades, later making its way to the Nintendo Entertainment System (NES), the Commodore 64, the ZX Spectrum, and more. It’s now 2022, and we’re getting a game on Nintendo’s current-gen console that pays homage to the original by giving us a chance to play it while also offering three additional options.

As someone who spent a lot of time at arcades back in the day playing Arkanoid and other games of the era, I was very much looking forward to taking this package for a spin. The controls are easy to use since you can move the Vaus, the paddle-like craft at the bottom of the screen. Move it with the left analog stick or the D-Pad as it hits the ball back toward the many bricks on the screen, keeping it in play so as not to lose a life. You will be able to dash with the ZL or ZR buttons, depending on the game mode you’re playing in. When taking on the Eternal Battle Mode, you can use the L and R buttons to target the player to your left or right, respectively. 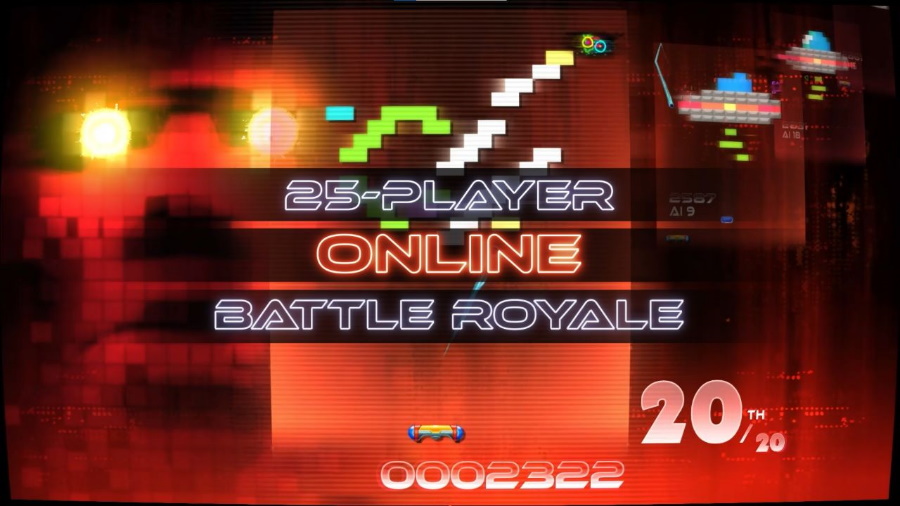 And now, let’s talk about the titular Eternal Battle Mode! This is a Battle Royale type of experience in which you will battle it out online in a 25-gamers fight to see who’s the last one standing. But before that can be decided, the final four will enter a battle against DOH, the evil boss from the Arkanoid series. You can collect special power-ups to gain the upper hand, such as one that glitches out your opponent’s screen, another one that reduces the size of their paddle, one that considerably increases the speed of their ball, another one that removes all of their upgrades, or a power-up that will turn their bricks into golden ones for a short period of time.

What are the rules in Eternal Battle Mode? Every 20 seconds, DOH will be ready to destroy whoever is in last place, so your overall score is crucial for surviving and climbing up from the group. If you lose the ball, your score will be reduced by 10%. You’ll have to keep a combo going to increase the value of each subsequent brick that you destroy. Keep that combo gauge going strong if you want to stay ahead of DOH’s wrath! Based on your performance for each match, you will gain points that will allow you to boost your rank or be penalized. Rank up to unlock skins. And once a season is over, points will be reset for all players! 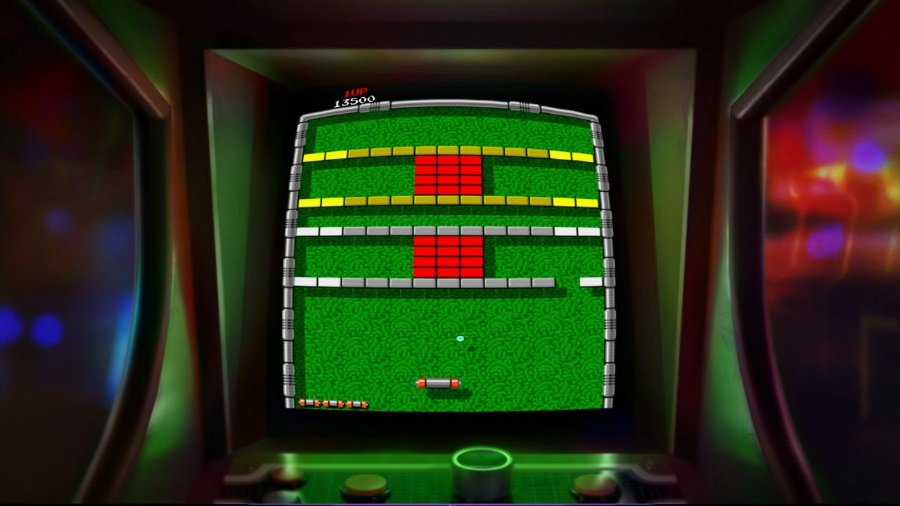 There’s also Retro Mode, a.k.a. the original Arkanoid. For Retro Mode, you’ll progress through 32 levels to face off against the evil DOH. Destroy all bricks on the screen to progress to the next stage. You can obtain extra lives when reaching 20,000 points and 60,000 points, with subsequent extra lives awarded for every extra 60,000 points you obtain. Item capsules will drop, granting you power-ups. Each capsule will let you know what power-up you’ll get thanks to its color, as well as the big letter on display. 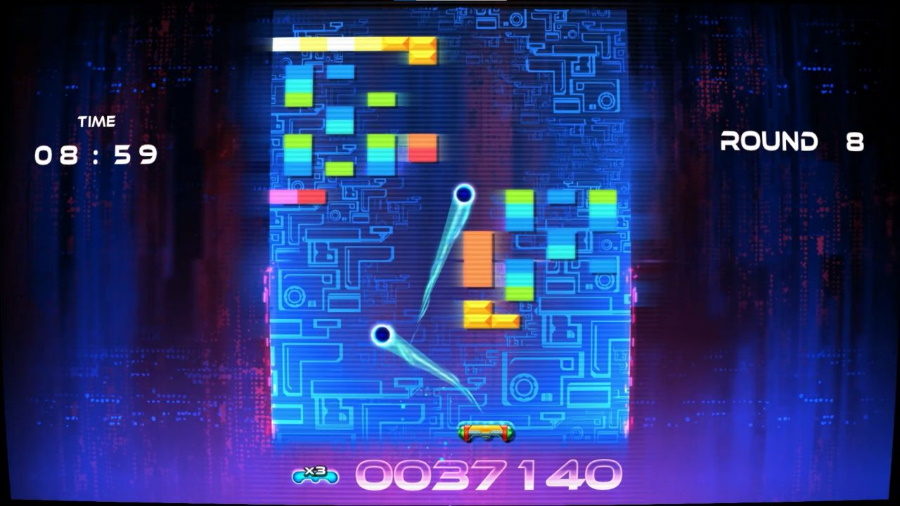 On top of that, there’s also Neo Mode, which gives the Arkanoid we all know and love a new coat of paint, with 45 levels in total taking you to battle against DOH. You’ll be controlling the ReVaus for this one, a revamped version of the paddle-like craft. Along with all of the bricks from the original game, there are also going to be red glowing bricks that will destroy all nearby bricks when hit, a black brick that will transform the ball into an antimatter ball, and a glowing yellow brick that increases the value of other bricks.

All of the power-ups from the original Arkanoid carry over while also being joined by new ones. These are the pink G capsule, which doubles the size of the ball. The X capsule increases the combo gauge. The dark green T capsule prevents the loss of a ball. Your combo and the upgrades for ReVaus carry over from one round to the next, and you will gain an extra life for every 20,000 points scored. When you get a game over, you can continue at the cost of 50% of your total score. There’s also Versus Mode. For Versus Mode, up to four players can duke it out locally in split-screen with the look and feel of Neo Mode. 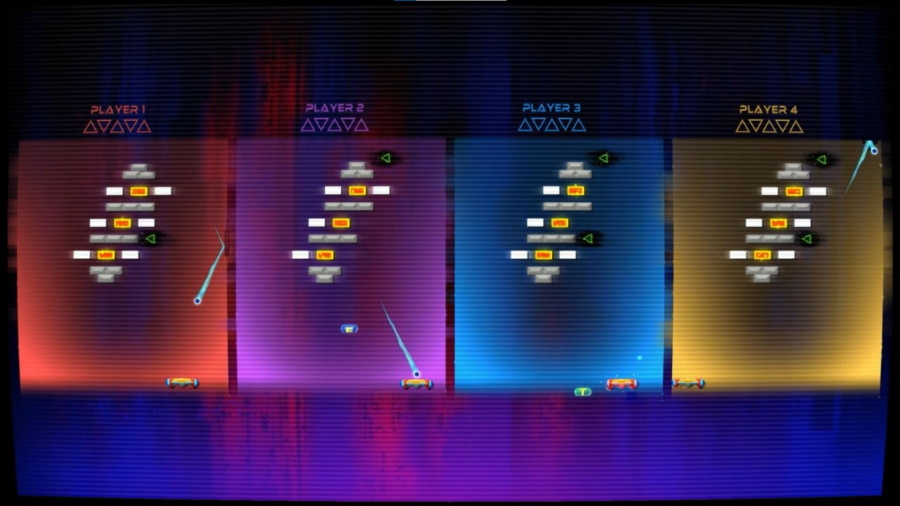 If you’re a fan of brick-breaking games and want to check out both a revamped take on Arkanoid as well as the classic version, and need a Battle Royale option on top of all that, then Arkanoid: Eternal Battle is perfect for you! There’s a lot of replay value in this game since you can always dive into the Eternal Battle Mode to duke it out in the 25-player experience as you try to improve your spot in the leaderboard for that, Retro Mode, and Neo Mode. While Eternal Battle Mode is very much an online experience – meaning that you need an internet connection – if there aren’t enough players to populate the remaining 24 slots, then the game will add AI opponents to the open slots after 60 seconds, thus allowing you to play against those that are online at the time as you work on boosting your ranking.


Arkanoid: Eternal Battle is available on Nintendo Switch with a $29.99 asking price. There’s also the option of getting some DLC – the Space Scout Pack – for $1.99. This will grant you access to an exclusive TAITO Arkanoid Skin Background that can be used during PvP matches. 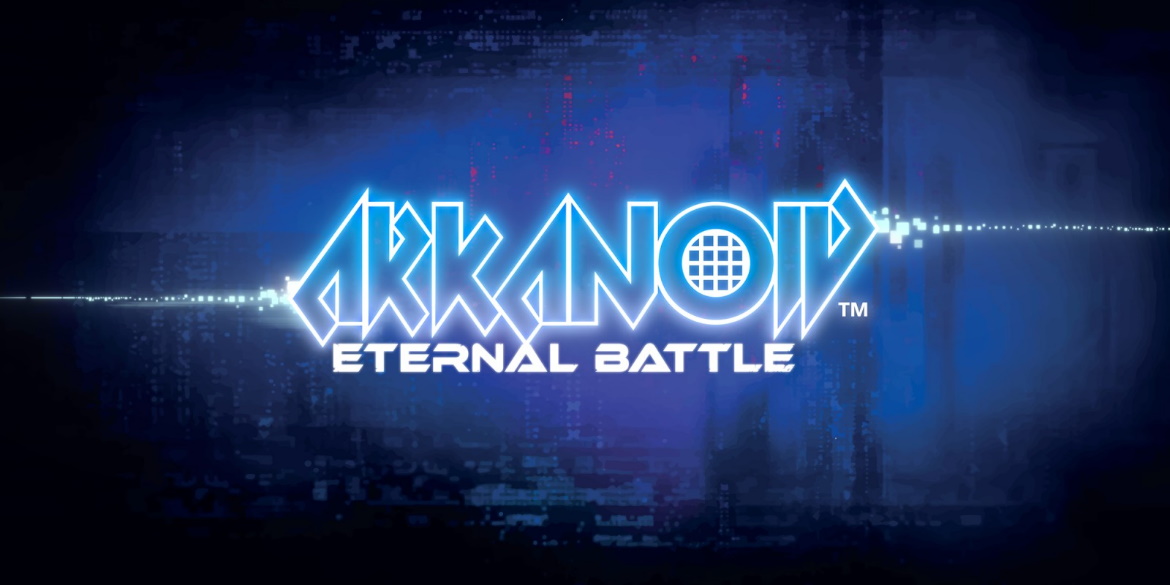 So much Arkanoid variety!

Disclaimer
This Arkanoid: Eternal Battle review is based on a Nintendo Switch copy provided by Microids.

Syberia: The World Before Out This Month