Them’s Fightin’ Herds from Modus Games and Mane6 is a charming 2D fighting game that you should check out on PlayStation. The game is the spiritual successor to Fighting is Magic, which was originally based on the My Little Pony: Friendship is Magic… until, you know, Hasbro sent Mane6 a kind cease and desist. The team then scrapped everything that tied that game to My Little Pony and started to work on what would eventually become the version of Them’s Fightin’ Herds we can now enjoy on PlayStation with an all-female cast of fighters.

If when looking at the trailer and screens for this Them’s Fightin’ Herds review, you get a big sense of My Little Pony in the designs and stages, there’s a very good reason for that. The cast of animal characters was designed by Lauren Faust, creative director and executive producer of My Little Pony: Friendship is Magic, which is why you have that initial reaction. But once you start to play, you’ll notice how the game’s small cast and the locations you’ll explore on this journey manage to stand on their own 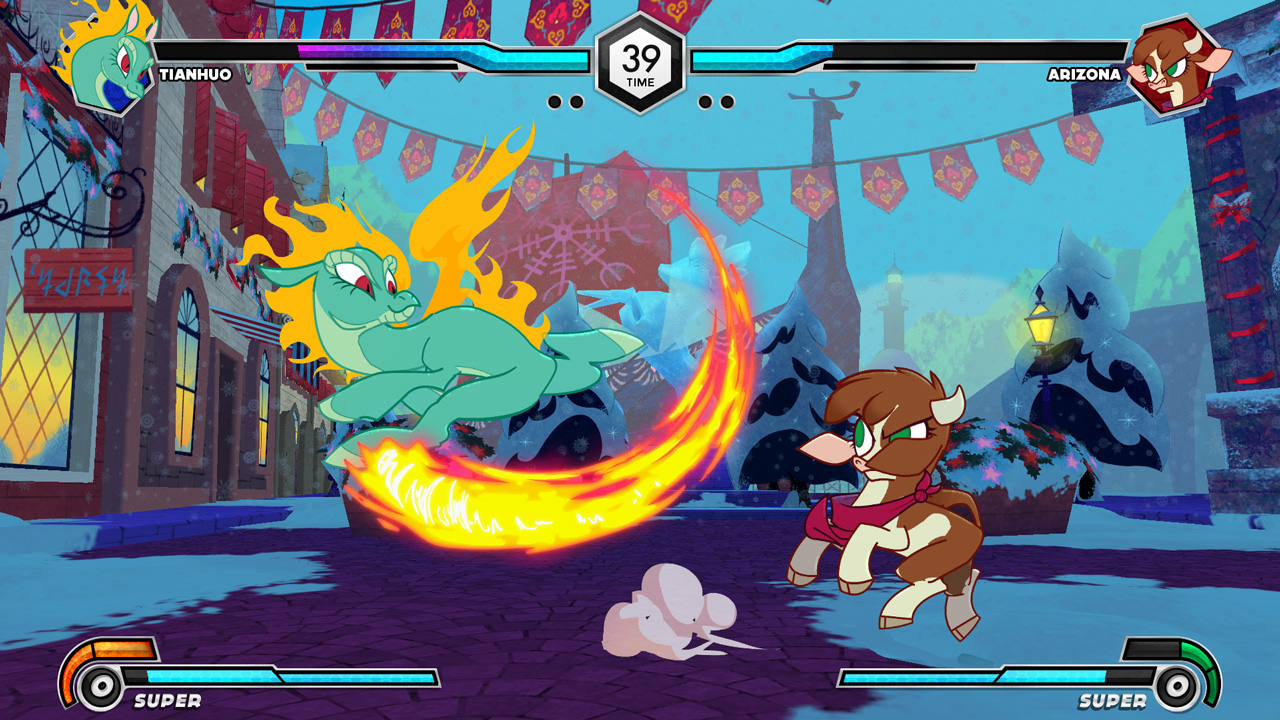 Indie studio Mane6 took the project to Indiegogo back in 2015, asking for $436,000 in funding for the development of this 2D fighting game. Once the campaign was over, and thanks to the support of 10,513 backers, the project ended up with a total of $586,346 in funding. This allowed the team to work on the game’s development for its eventual 2020 release on Steam, and we now get to play a version that has been improved and revamped for consoles with the latest updates and all available content.

There are five difficulty levels for you to consider. There’s Sleeptrot, which is the easy one for those of you without any experience with fighting games. The second one is Greenhorn, for players with some skills or who have fought some fighting games before. For Contender, which is equal to hard, things will start to get spicy. Champion is equal to very hard and should be used for those that have some experience with Them’s Fightin’ Herds. And the last one is ¿NSP&KBL? reserved for those who want an insane challenge dialed up to 11. You can play local or online versus, take on the Arcade Mode, play the Story Mode, and even train for a bit to improve your skills as you learn new combos.


Arcade Mode allows you to select your character as you take on all other opponents before facing a series of boss fights as your final challenge, but that’s about it. Training makes it possible for you to learn all of the basics as you improve your abilities and find out how Them’s Fightin’ Herds works. And then there’s the Story Mode, which features a Prologue and different chapters where you’ll take on the threat of the ghostly creatures that have invaded the land. Each of the groups in the Kingdom must name one of their champions to go on a quest to retrieve the key of legends that the Predators are looking for. 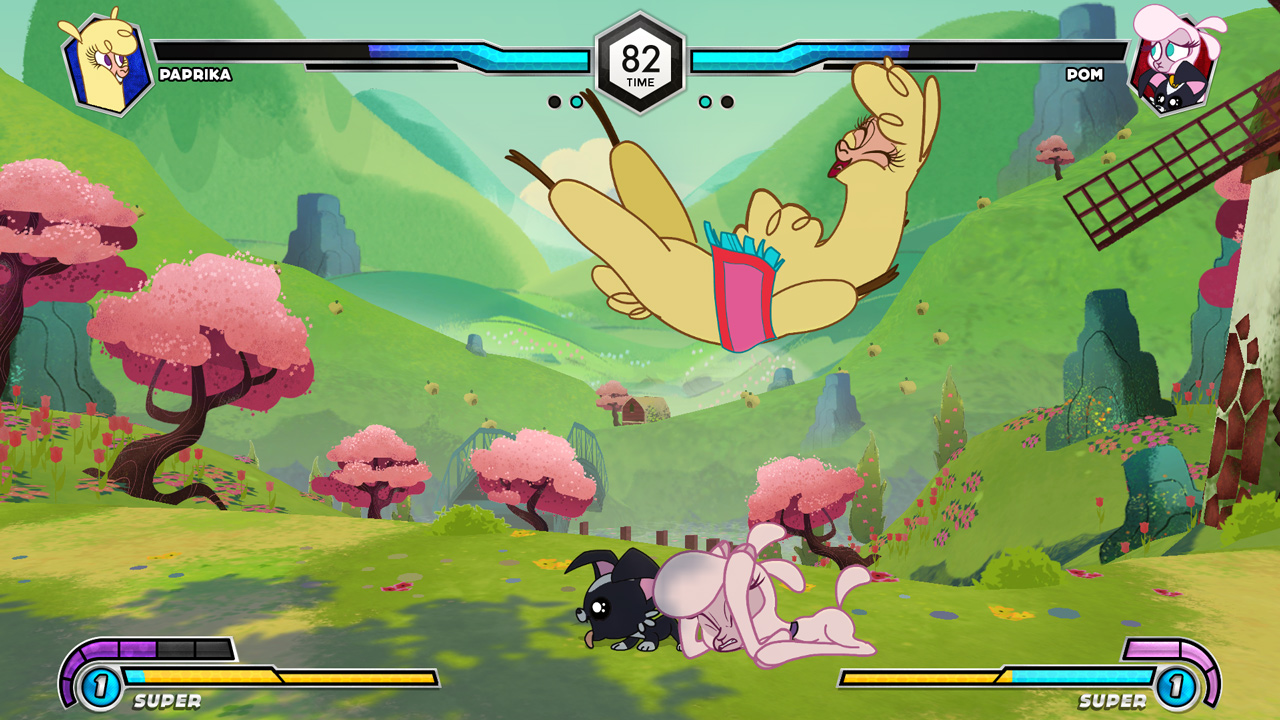 Story Mode has you exploring a top-down land presented in a pixel art style that offers an interesting contrast to the HD hand-drawn art for the rest of the game, which is a nice touch. You’ll be exploring each area as you interact with NPC, search for collectibles, solve some puzzles and battle your way towards your ultimate goal: finding the key. It will be a chunky experience that is a solid complement to what the regular Arcade Mode – and the offline and online versus matches -has to offer.

While all characters share the same basic commands – using light, medium, and heavy attacks, having access to magic, using throws, dashing, and the basic light-medium-heavy combo – each character has some unique commands that each one feels very different. This is extremely important, considering that there are only six main characters to begin with. At least the game now also includes Shanty, a 7th character who was made available as DLC, and it’s now
rolled into the main experience. 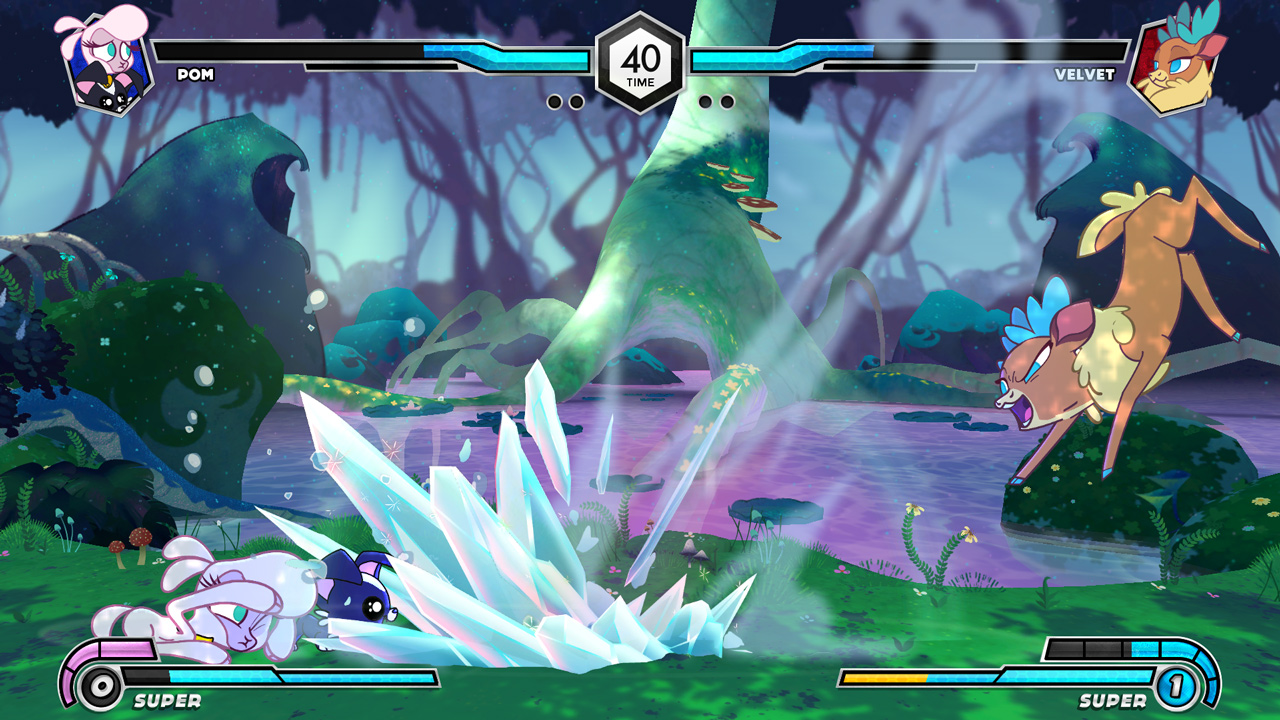 
Each character also has special attacks that can be with the classic fighting game input sequences we all know and love. These include quarter circles, half circles, double taps, holding left for a second and then pressing right, and holding down for one second and then pressing up, to then press the Square, Triangle, or Circle button, depending on the type of special attack you want to unleash, or the speed at which you want, say, a projectile to travel down its path.

On top of that, each character has a magic ability that is activated with the X button, and each character will be using magic in a different way – as well as charging and storing it differently! For example, Velvet will charge magic at a steady pace and can use it to power her ice magic attacks. Tianhuo will only have two slots for magic to store up, but she can use magic to fly, attack, quickly retreat, or perform a powerful volcanic dash. Oleander has a magic cursed book by her side, and you can press and hold down the X button to absorb magic from it to then attack, set up a trap, or teleport. 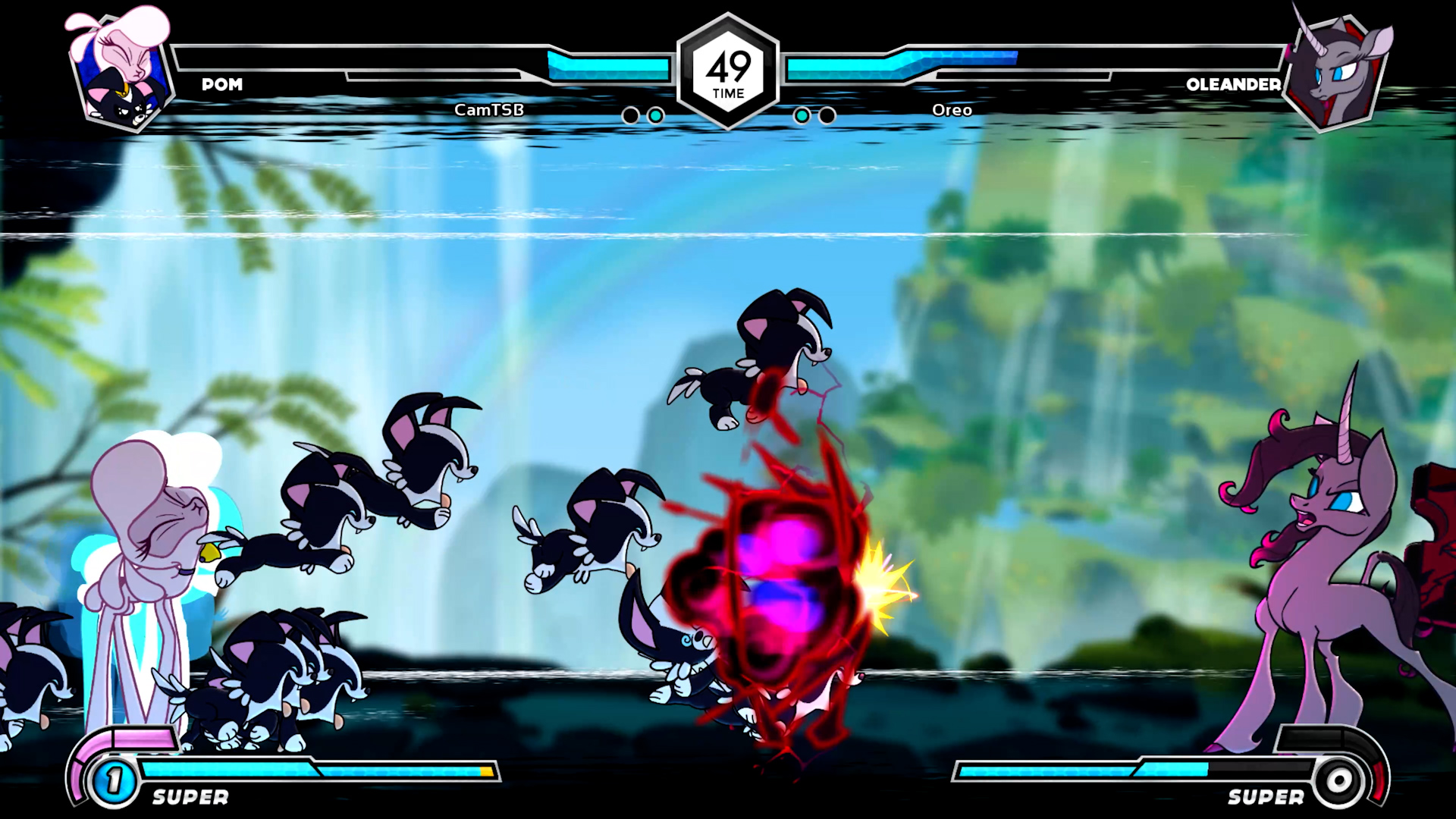 And to make each character feel even more special, each will have unique commands and skills that only they can use. Pom can float for a bit, air dash, and is super light. Oleander can double jump and use the power of the book to use a deadly dark claw to attack its opponents. Shanty has a short hop, which can help her set up some deadly combos by making an opponent think she’s performing a full jump, and she also has a powerful attack that can stagger an opponent. Arizona can run full-speed ahead at its opponent and also has a mighty elbow drop attack.

The game has a full trophy list with a Platinum trophy, and you’ll have to work on unlocking 5 Bronze trophies, 18 Silver trophies, and 4 Gold trophies. You’ll have to complete Arcade Mode with each of the seven characters in Greenhorn or higher difficulty, winning 1, 10, and 25 online matches, playing 1 and 25 online matches, starting Story Mode, completing the Story Mode for each character, obtaining all collectibles in Arizona’s story chapter, completing all combo trials for each character, and more.


There are several configuration options for you to consider for your time with Them’s Fightin’ Herds. You can select if replay saving should be manual or automatic for local matches, online matches, or for all matches, if there should be any background characters during fights (either only non-backer characters or all characters), how many rounds there will be for each fight (1, 3, 5, 7 or 9), if there will be cross-platform matchmaking, the time limit for each round (infinite, 30, 60, or 99 seconds), the GGPO Frame Delay to minimize rollbacks, max ping tolerance, the controller dead zone percentage, and auto controller reset for when a new controller is connected. 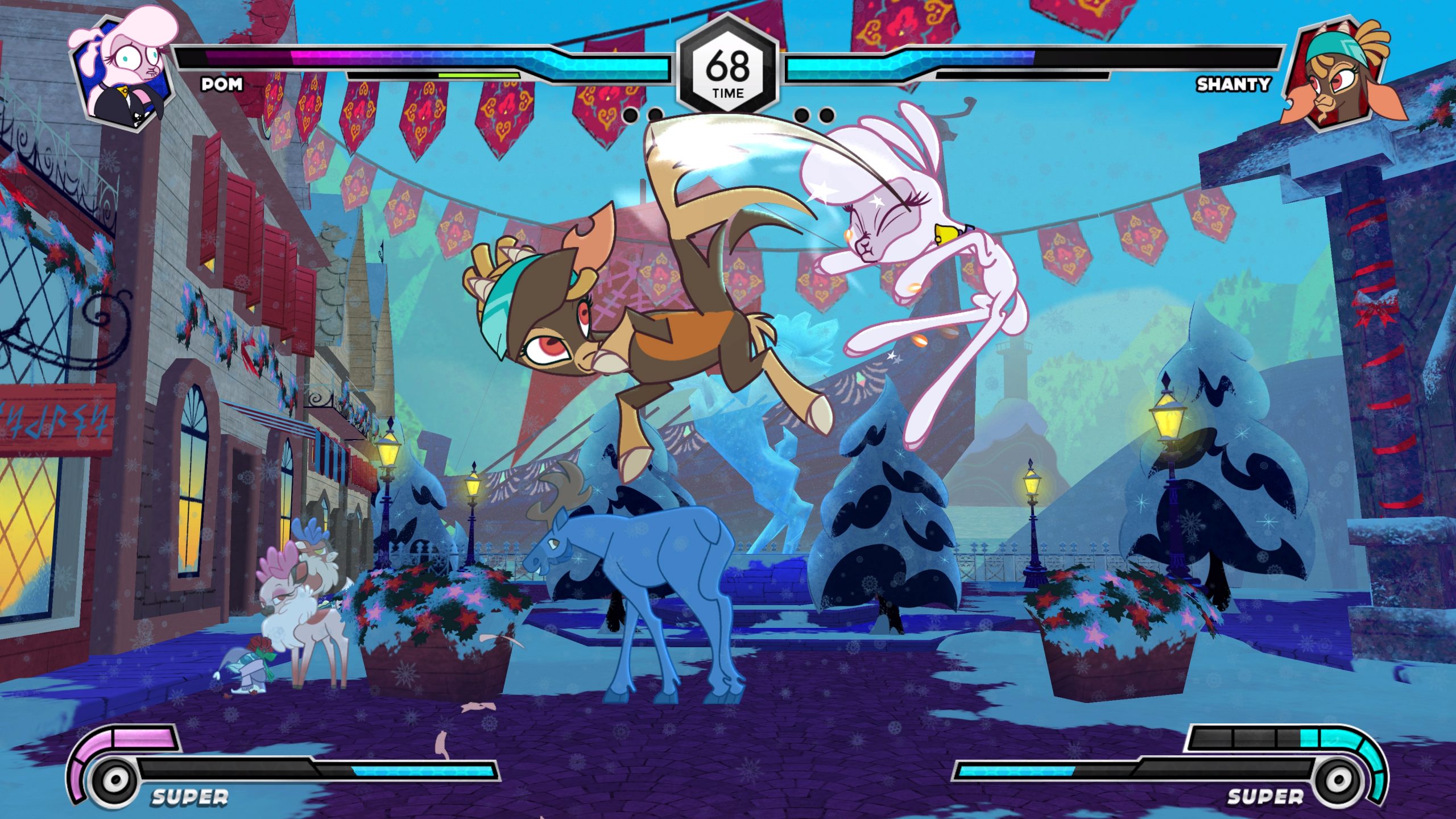 Them’s Fightin’ Herds is a game I’ve been following since way back when it had its crowdfunding campaign, and it’s one I had been looking forward to checking out on PlayStation 5. While its roster is tiny compared to current fighting games on the market, it’s not that far removed from the one for the original Street Fighter II, which had only eight fighters during its original release. Each of the fighters in Them’s Fightin’ Herds feels unique, with different special abilities and skills to master.

Them’s Fightin’ Herds is available as a Cross-Buy title, so your $19.99 purchase will give you access to the PlayStation 4 and PlayStation 5 versions of the game. There’s also a Season Pass 1 bundle for $19.99 that give you access to four additional fighters as they release, as well as additional colors for all main fighters, as well as extra accessories for your character to use while in the pixel lounge for online fights. 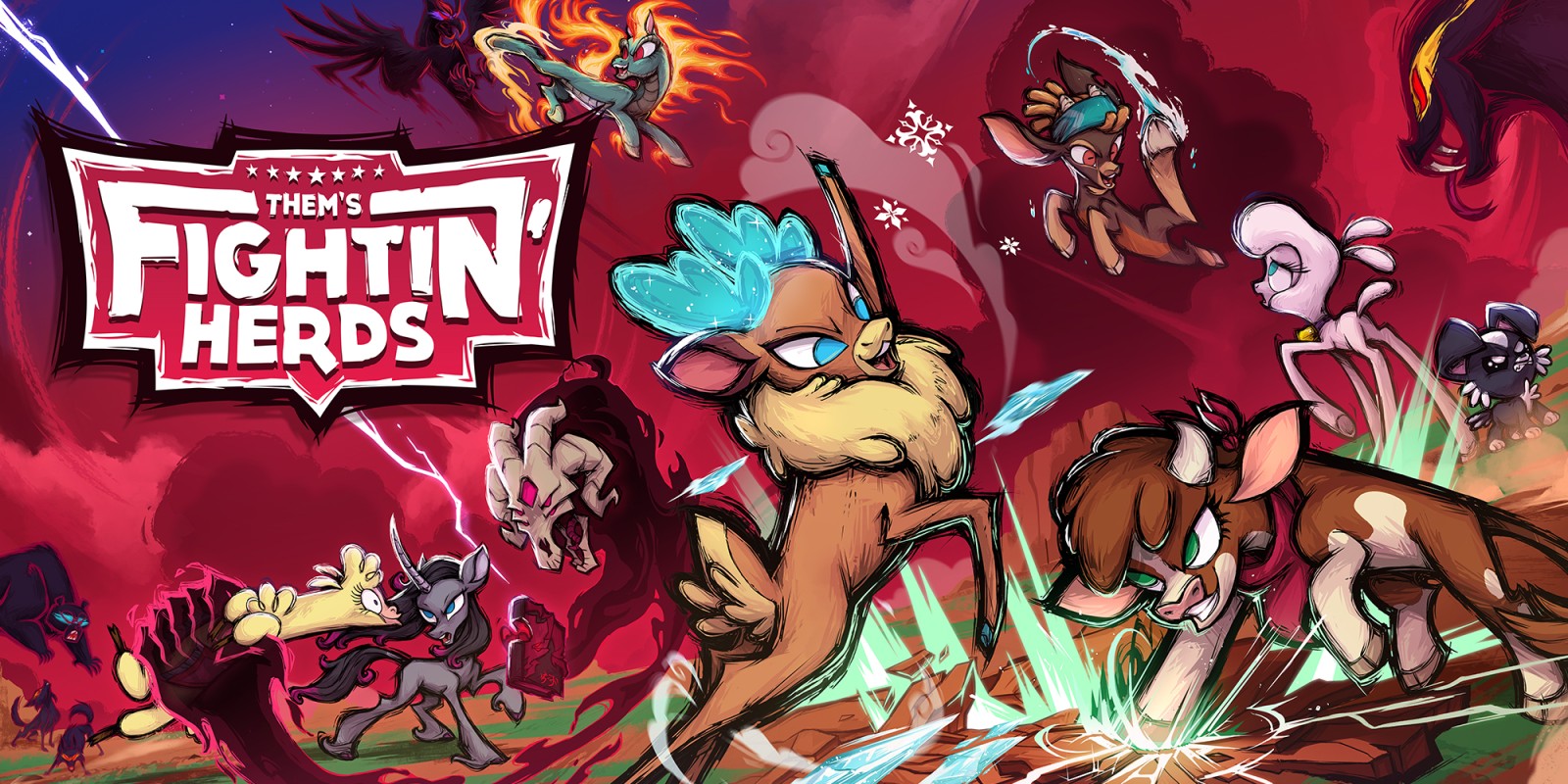 Solid fighter only held back by its small roster

Disclaimer
This Them’s Fightin’ Herds review is based on a PlayStation 5 copy provided by Modus Games.

Hatup Out Next Week