Aniquilation from R-Next and Gamera Games is a hectic twin-stick shooter on PlayStation 4. Learn more in our Aniquilation review!


Aniquilation from Colombian indie studio R-Next and publisher Gamera Games is a hectic twin-stick shooter on PlayStation 4. It’s set on small planets in which you’ll use your shots as well as your sword to destroy everything and everyone in order to survive. Your search for IQ metal, the energy source that powered your civilization, led you into a war over the ultimate weapon: the titular Aniquiliation. The game offers a Story Mode as well as a Vs. Mode. The Vs. Mode is split into four different local multiplayer options. This is a game that has clearly been inspired by Super Stardust HD. 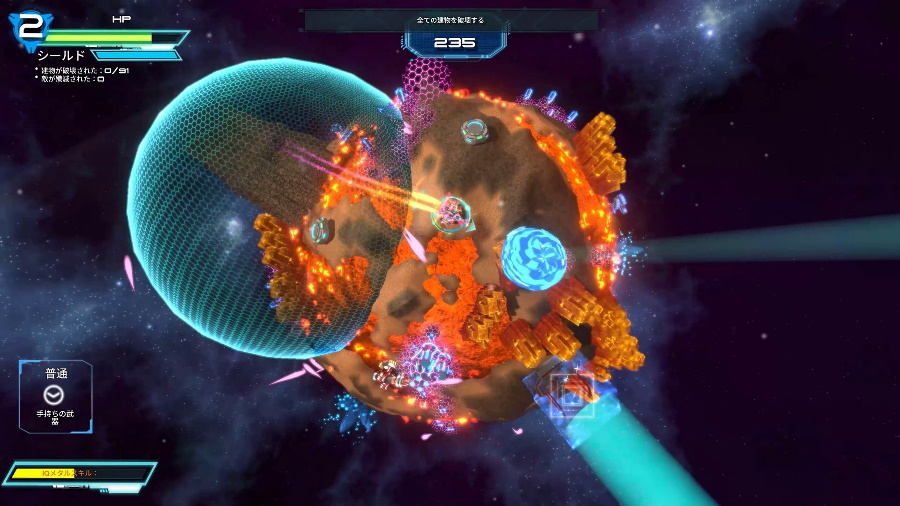 
You’ll start with a tutorial mission that will show you the basics as you take on a simple goal: destroy all the buildings that are absorbing resources from the planets in your galaxy. You will move with the left analog stick and aim and shoot with the right one, or you can also attack by pressing the X button. Your special power will be mapped to the Circle button. Your sword can reflect shots by pressing the R1 button or by pressing in on the right analog stick. You will have a shield to protect yourself from attacks by pressing the L1 button and will gain access to new weapons as you progress through the game. Your ship can dash with the R2 button. 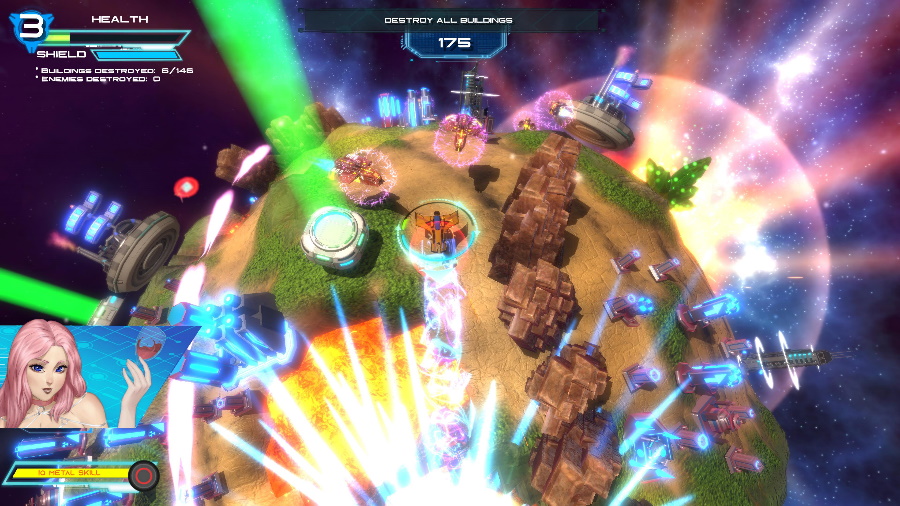 If you’re not careful, you’ll receive a ton of damage from enemies and their attacks. You will need to make good use of the bases you can find along the way since they can help you recover any lost health. Do know that you won’t be able to shoot while healing, but you’ll still be able to use your shield and sword as needed. Using bases to heal is a must since when things get trickier, you can end up dead in an instant.


As you complete each stage, you’ll be rewarded with experience points for your efforts. Collect enough experience points, and you’ll level up. Doing this will reward you with a boost to your health, speed, resistance, or strength, so be sure to defeat as many enemies as possible, reflecting bullets or using your sword to turn small enemies into projectiles. When traveling between planets, you’ll travel through an energy tunnel where you’ll have a chance to collect some IQ metal to boost your special ability bar so that you can unleash your IQ metal skill ASAP – be that a super shield to protect yourself or a super blast attack. 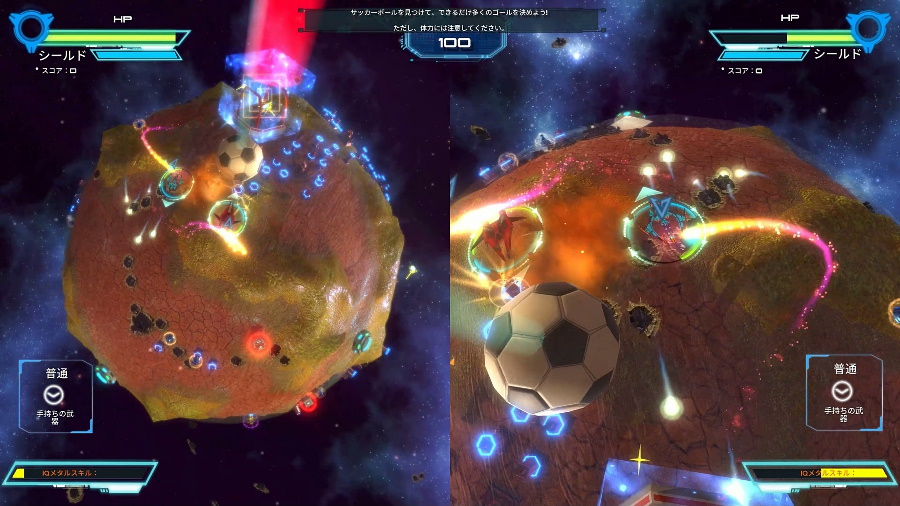 Aniquilation has a full trophy list with a Platinum trophy to work on. The list is split into 14 Silver trophies and 4 Gold trophies. The first trophy you can get will be for completing the game’s tutorial. After that, there are trophies tied to defeating each of the major bosses in the game, trophies for completing one level in local co-op, for playing each of the four different multiplayer modes, for destroying 1,000 elements with reflected objects, for deflecting 1,000 elements, for finding two special characters, and for completing the game after finding said special characters. Unfortunately, for some reason, the game’s trophy list is not syncing, which is weird since it launched over two months ago. 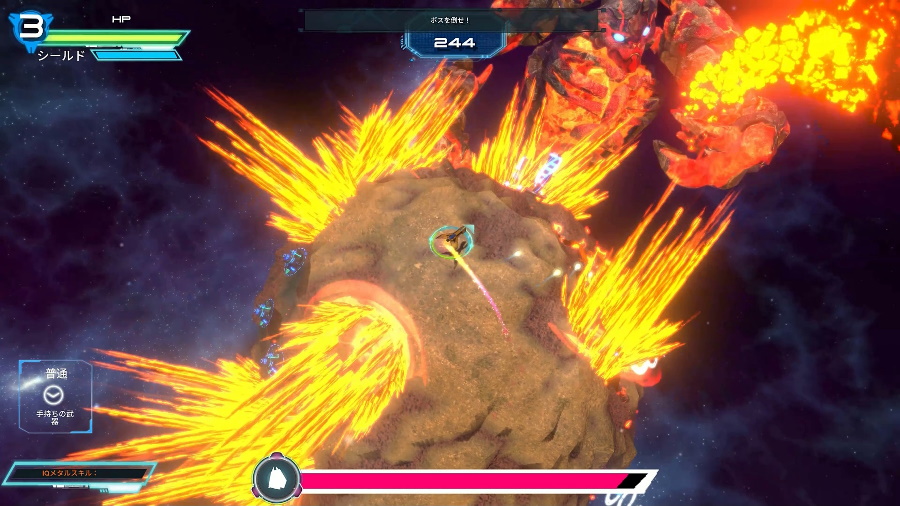 Aniquilation is a game that has been clearly inspired by Super Stardust HD, which is a solid foundation for a potentially fun game. Unfortunately, it does not manage to stick the landing. There are some control issues that make aiming and attacking enemies feel a bit off, and the game’s difficulty is all over the place, with some levels having enemies that home in on you and destroy you within seconds, while other stages have enemies that fly into the walls away from you. For trophy hunters, the trophy list is not that hard to work on, but there are a couple of trophies that might get in the way. Aniquilation is out on PlayStation 4 with a $14.99 asking price. 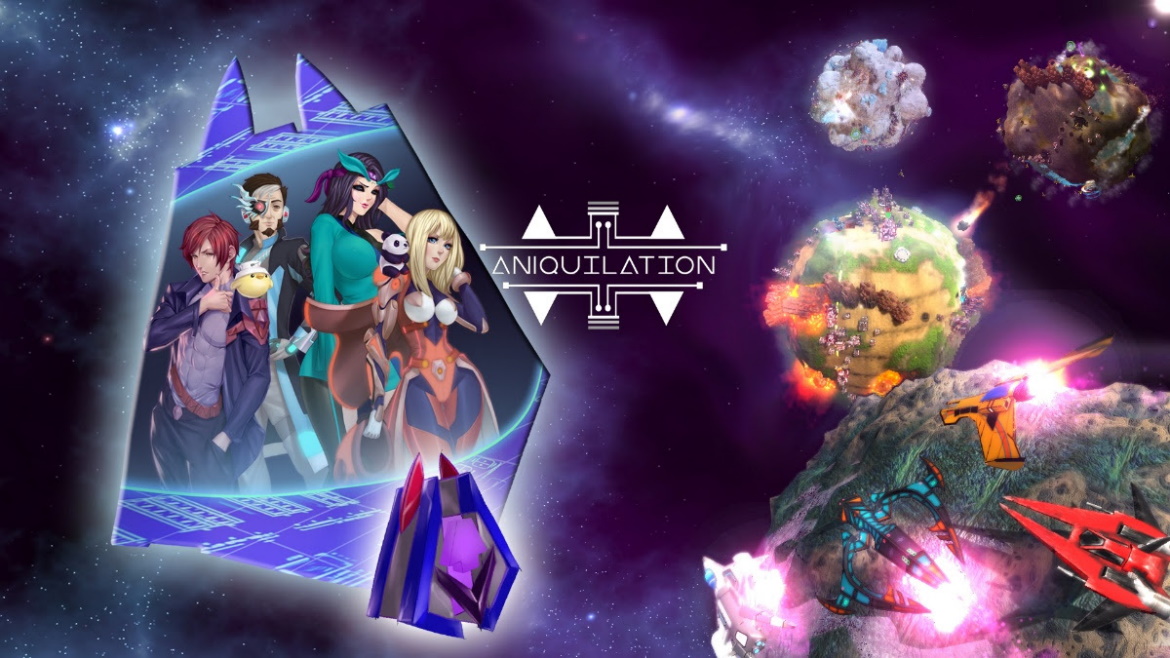 Hectic twin-stick shooter that could use some extra polish

Disclaimer
This Aniquilation review is based on a PlayStation 4 copy provided by Gamera Games.