The Spirit and the Mouse from Alblune and Armor Game Studio is a charming 3D platforming journey on Nintendo Switch. This adventure begins on a rainy night in the quaint village of Sainte-et-Claire. While all the villagers are sheltered in their cozy homes, some are not as lucky. This is the situation of a small mouse named Lila who, after being chased by a cat, ends up all alone in an alley, searching for a purpose. Little does she know that something extraordinary is about to happen that will change her life.

She’s noticed how humans always seem to have a problem that needs solving and how they’re not as happy as they could be. Maybe if someone helped them, that would make it possible for them to enjoy life! But she’s only a small mouse, and she lacks the skills to be able to do something about it. But maybe, just maybe, there’s a way for her to make a difference! After a scarf is sent flying by the harsh winds, the mouse decides it can go and get the scarf to help the human. It’s then that the lighting rod in which the scarf has been trapped attracts all of the might of the storm!


The good news is that, for some miraculous reason, this won’t fry up the mouse! Instead, it will gain special powers that will allow it to travel through electrical wiring as well as perform other actions. You’ll learn about these once you meet Lumion, who is the spirit in the game’s title. Lumion was sent to Sainte-et-Claire to help people with their problems to improve their happiness, and he won’t be able to return home until he’s generated enough happiness. Since the mouse now has Lumion’s powers, they must work together to help the people of the village. 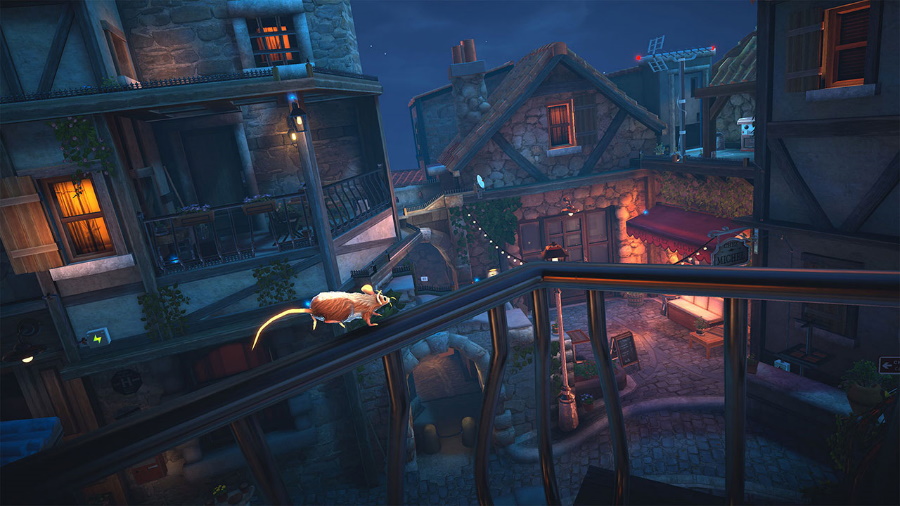 You’ll control your character with the left analog stick, move the camera around with the right one, and interact with objects or other characters as needed by pressing the A button. The A button can be used to listen to what humans have to say, to jump on top of higher surfaces – since the mouse will automatically jump on top of small ledges – or to climb up some areas by pressing the A button and then moving upwards. To drop down when climbing, just press the B button.


The B button can also be used for crouching so that you can walk slowly. If you need to recenter the camera behind the mouse, you can do so with the ZR button. If a character is currently following you, you can speak to it by pressing up on the D-Pad. Once you’ve gained its special power, you’ll be able to activate Electric Mode by pressing the ZL button. While in Electric Mode, you’ll be able to pass through some surfaces. Press the Y button, and your character will be able to shock objects around it. If you’re ever feeling a bit lost, press the – button to open up your map. Oh, and the mouse can squeak by pressing the X button! 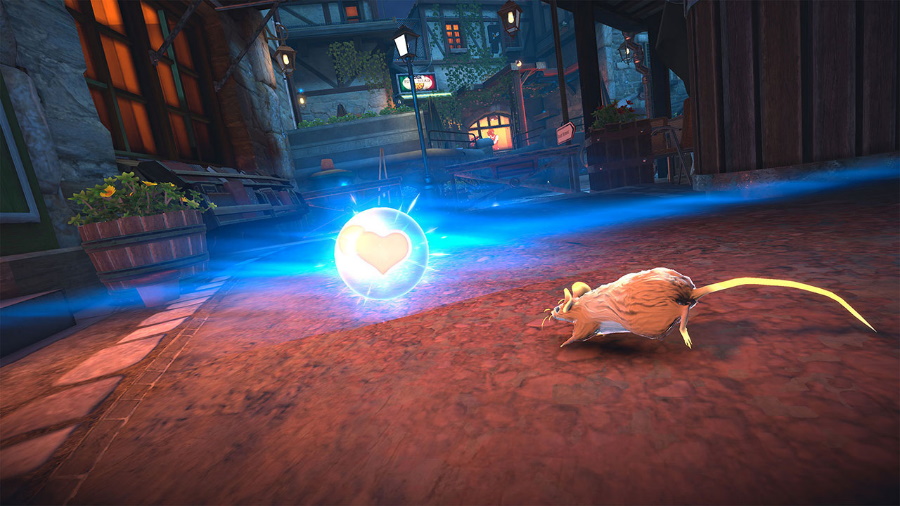 While your new electrical powers are very useful, you won’t be able to fix everything on your own. Enter the Kibblin! Lila will be able to interact with the Kibblin that are needed to power up the Kibblin-Boxes. Without their Kibblin, a Kibblin-Box won’t be able to, say, make an antenna work properly, which could keep one of the humans from seeing the premiere of the latest episode of their favorite show! But before you can bring the missing Kibblin back to their box, you’ll have to complete some additional missions, such as collecting some letters that flew away during the storm, or


By shocking glowing objects, you’ll release a bit of their energy. Some objects might end up breaking and revealing one of the hundreds of blue light bulb collectibles in the game. Other blue light bulbs might be hidden behind objects, so if you want to 100% the game, be sure to search high and low! As for the energy you collect, you’ll have to spend it to activate a variety of contraptions so that you can help humans be happier. Energy can also be used to purchase maps for each area so that you can tell how many blue lightbulbs are left in each one. Collecting the blue lightbulbs will allow you to unlock additional things to buy with your energy. 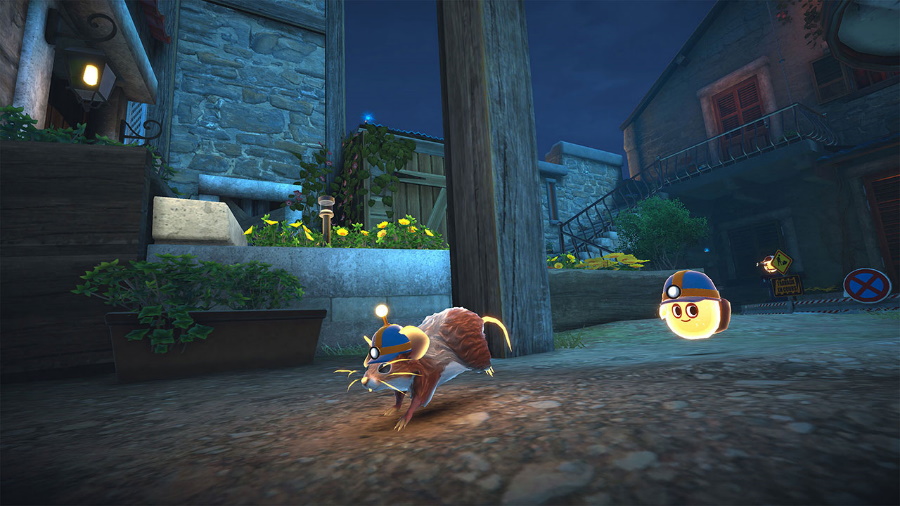 Since I love the game’s art style and its overall presentation, I’m more than happy to report that The Spirit and the Mouse has a Photo Mode for you to use! You’ll first have to spend 100 energy with Kishine – one of the Kibblins you’ll meet – to then be able to activate it by pressing down on the D-Pad. Once in Photo Mode, you’ll be able to pan the camera around Lila with the left and right analog sticks, tilting it with the ZL and ZR buttons, changing the photo’s frame with the L and R buttons, changing Lila’s pose by pressing in on the right analog stick, and changing effects by pressing left and right on the D-Pad. And once you’ve managed to collect 40 blue lightbulbs, you’ll be able to purchase stickers to decorate your photos. 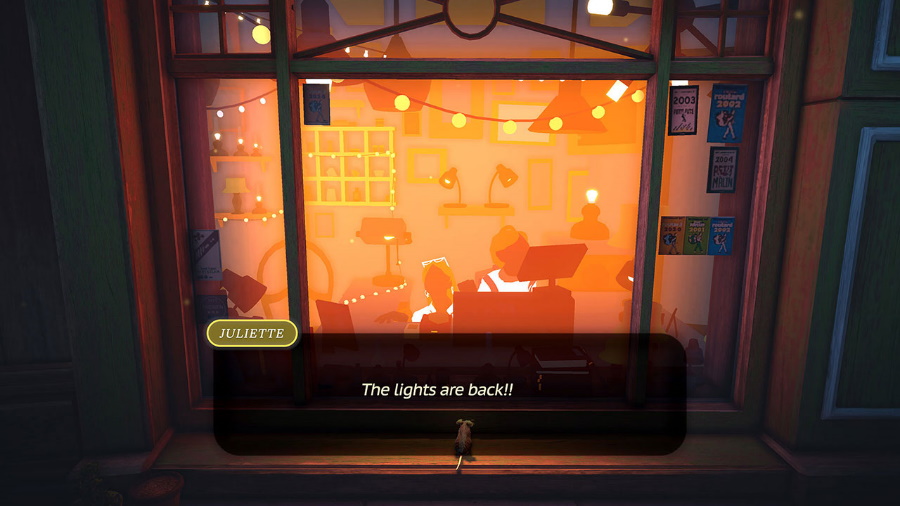 The Spirit and the Mouse is one I have been following from the moment it was announced since it seemed to mix a charming character with fun gameplay mechanics, all wrapped in a game that looked great. Having played the game on Nintendo’s console, I can report that this is a solid narrative-driven puzzle platforming adventure that you’ll love. The game is not perfect, so there are some random hiccups in the framerate here and there, but nothing major. You’re looking at around 4-5 hours to complete The Spirit and the Mouse, with maybe an extra hour needed for collecting any missing blue lightbulbs. The Spirit and the Mouse is out on Nintendo Switch with a $19.99 asking price. 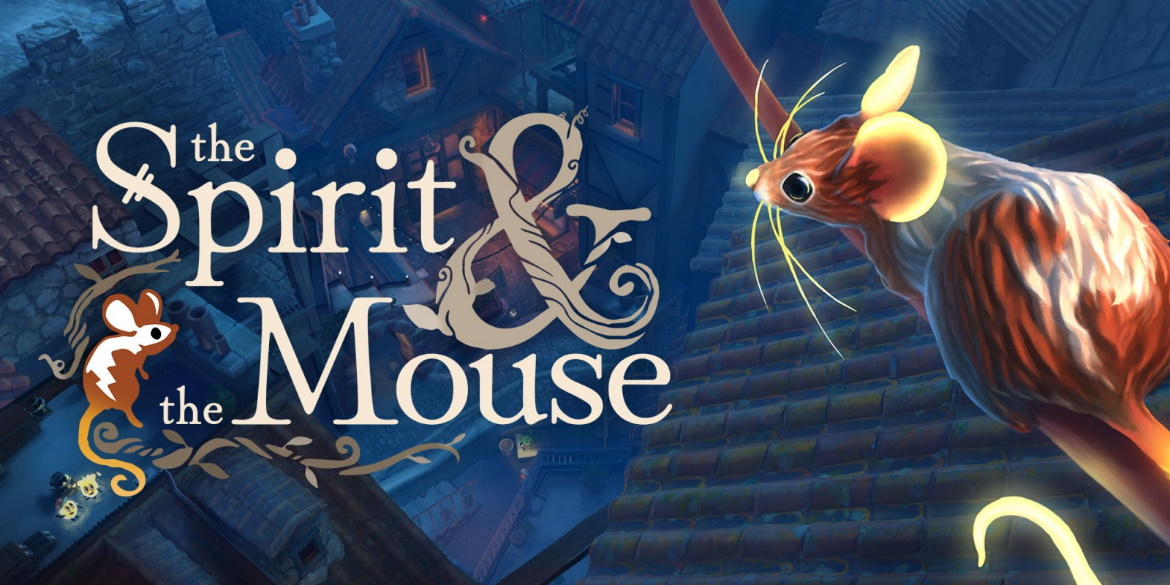 The Spirit and the Mouse Review

Game title : The Spirit and the Mouse

Disclaimer
This The Spirit and the Mouse review is based on a Nintendo Switch code provided by Alblune.