It’s time to dive into NIS America classics La Pucelle: Ragnarok and Rhapsody: A Musical Adventure! After giving us Phantom Brave: The Hermuda Triangle Remastered and Soul Nomad & the World Eaters by way of Prinny Presents NIS Classics Volume 1, and then offering us Makai Kingdom: Reclaimed and Rebound and ZHP: Unlosing Ranger vs. Darkdeath Evilman in Prinny Presents NIS Classics Volume 2, it’s time for NIS America to give us a look into another pair of classics from its vast catalog.

First up, we have JRPG La Pucelle: Ragnarok, which was originally released in Japan on the PlayStation 2 way back in 2002, with a North American port launching in 2004, and a European port in 2005. The North American version was published by Mastiff, while the European version was published by Koei a handful of years before the merger with Tecmo. It was later ported to PlayStation Portable console as La Pucelle Ragnarok back in 2009, but that version was only ever released in Japan… until today! 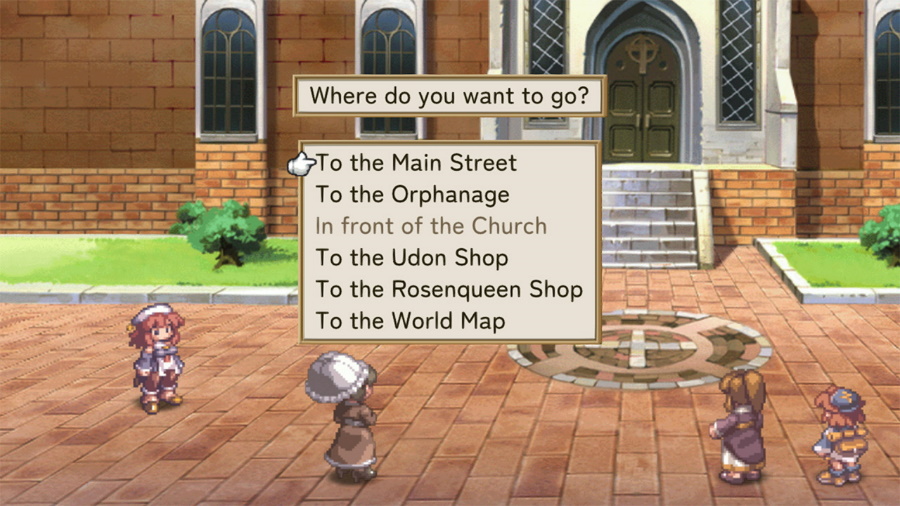 With La Pucelle Ragnarok, we’re getting the best version of the game since you can play it at home or on the go, enjoy new scenarios, take on new recruits, experience new voices and music, as well as take advantage of a handy quick travel option. There’s a new story to take on that is certainly very different from the main story, which is always a treat. La Pucelle Ragnarok tells the tale of Prier, an apprentice demon hunter, a member of the Church of the Holy Maiden in the city of Pot a Feu.

Battles take place on maps presented from an isometric view, which is what the beloved Disgaea series has gotten us used to through all these years, so fans of the series will certainly feel right at home. When in combat, there are several elements for you to consider, from where your units will be placed at the start of a battle to the dark portals on each map. Dark portals are important because they will allow more enemies to jump into battle, so you certainly need to take care of them. 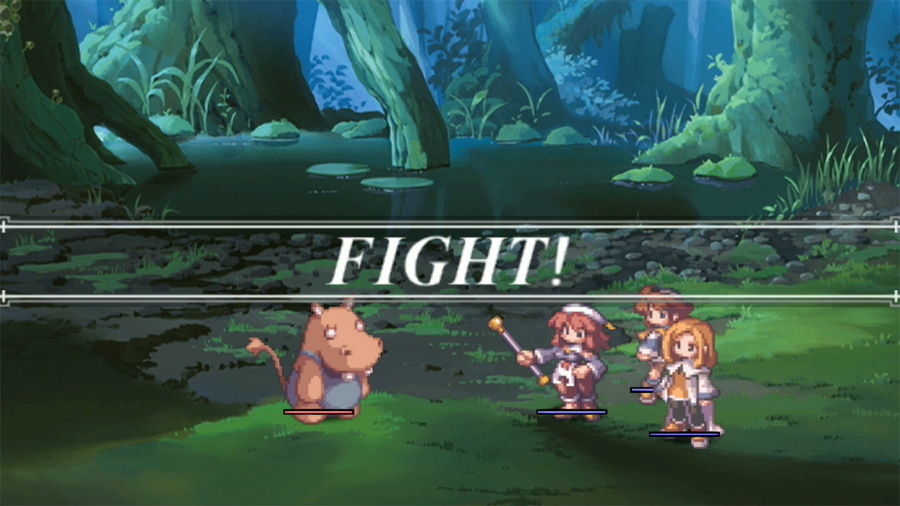 
Dark portals will have colors to consider since each color will have a different effect. You can even combine the colors of different portals to produce new colors with new effects. If you, say, combine a blue energy stream and a green energy stream, you can heal your group while purifying enemies. Combine the red energy from a dark portal with the green energy from another dark portal, and you can unleash an explosion that can deal lighting damage to your opponents. 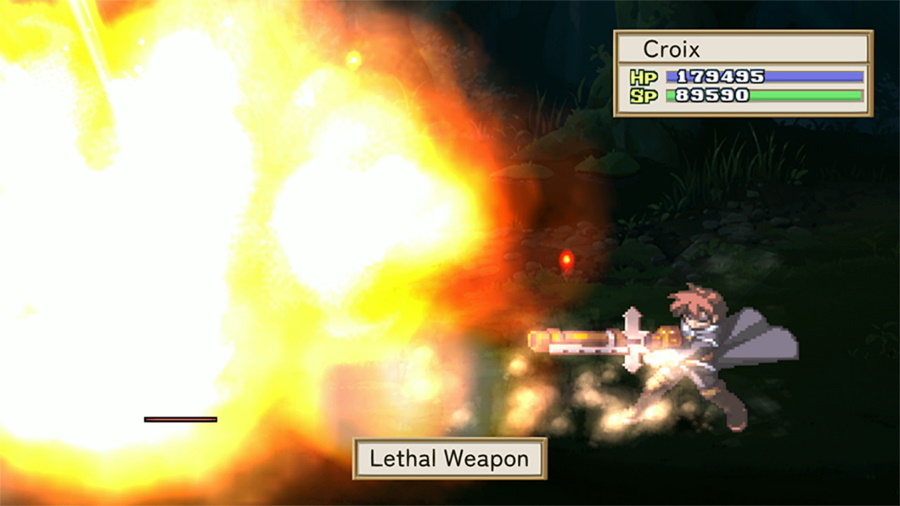 And now you’re probably wondering what would happen if you manage to loop the dark energy flow so that you can have a closed circuit that is particularly long – 15 squares or more long – then purifying the dark portal will also unleash a miracle. Enemies on the path of the dark energy flow will be damaged, as will those that are within the circle of the circuit. The bad news is that you won’t be getting that many extra experience points from it, but it does feel great when you manage to pull it off!

You can purify enemies before defeating them, and this will sometimes make it possible for them to join your cause and defect to your side. The more times you purify an enemy, the greater the odds of said enemy joining your group. Just remember that you can’t try to convert boss characters! Oh, and when you exit the battle and go to the world map, the HP and SP of your characters will be fully recovered. But if you need to heal during battle, then you’ll need to use an item or use the special ability of one of your characters. 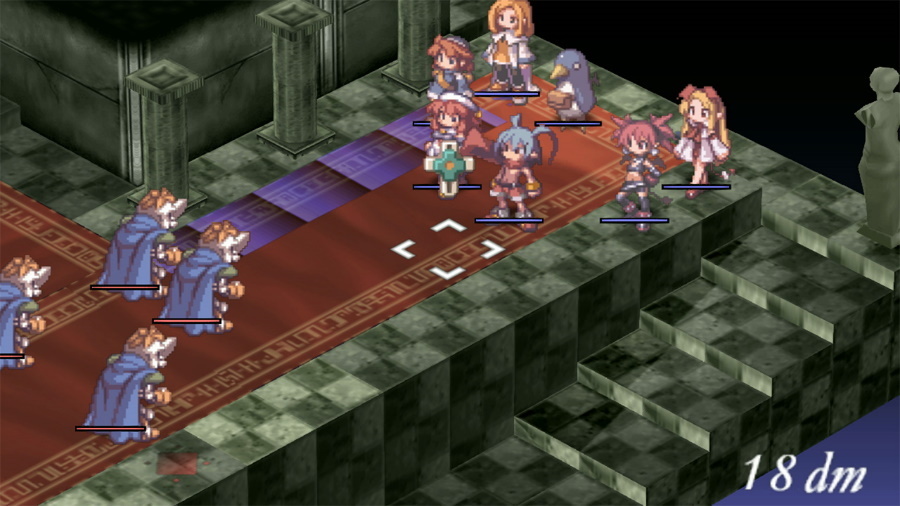 When you purify a dark portal, power is stored in any of the items that you have equipped. Once an item has stored enough power, it will level up, just as if it was one of your characters who had gained enough experience points from defeating enemies. And if you purify a portal with the same elemental alignment as one of your items, it will receive even more power. There’s a limit to how much you can improve an item, so don’t expect a weak item to turn into a super item. Focusing on upgrading a stronger item is a better strategy. As you can see, there’s a lot to work on during your time with La Pucelle Ragnarok as you help Prier and her group help her become the Holy Maiden of legend.

And then we have Rhapsody: A Musical Adventure! This one from NIS America was released for the original PlayStation console back in 1999, with a North American port published by Atlus in the year 2000. As its name suggests, this one is a musical RPG, which means there will be several songs for you to experience during your journey. Its main character is Cornet Espoir, a passionate puppeteer who has the magical skill of being able to communicate with puppets, a powerful ability that she’ll put to good use. She’s joined by Kururu, a very special puppet that can also talk to other humans!


Cornet longs for her Prince charming. Unfortunately, she’s not the only one who has set her eyes on Prince Ferdinand, who is soon to become King of Marl. There’s also Etoile Rosenqueen, Cornet’s arrogant rival. And to make things worse, the evil witch Marjoly has turned the Prince to stone! Marjoly is the self-proclaimed most beautiful witch in the world, and she’s also got a crush on Prince Ferdinand. Unfortunately, she’s not that good of a witch. You see, Marjoly intended to put Prince Ferdinand to sleep, but she messed up the spell, hence the actual outcome. 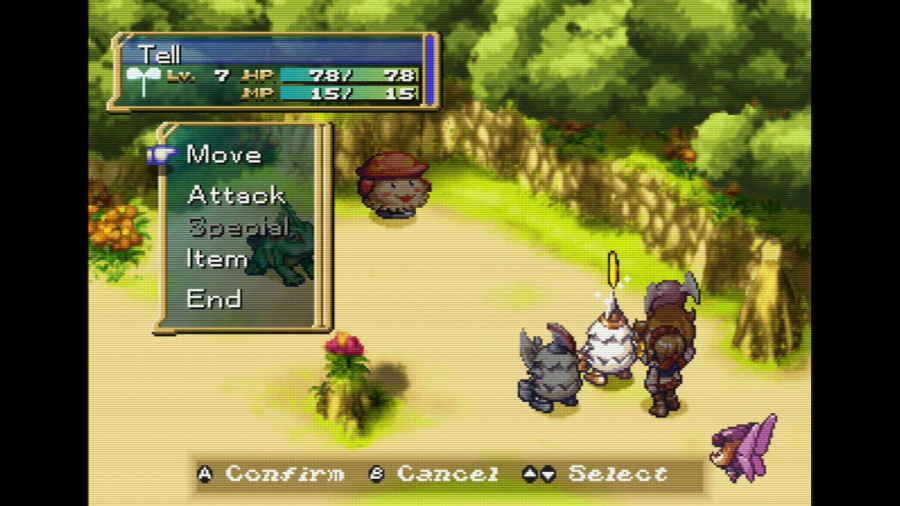 Once you get started, you’ll be controlling Cornet as she explores each area, calling into battle the puppets that she has added to her group. Each character will have different stats for hit points, magic points, offense, defense, agility, intelligence, and movement, as well as different skills to consider when fighting. For example, while all characters can attack, Cornet can use her horn to cheer on the puppets in the party. Sharte, the first puppet that will join your cause, can use Saint, which deals holy damage or use Heal, which can restore some lost HP.

Battles are of the random encounter variety, which is exactly how JRPG did things back in the day. When you find yourself in a battle, you’ll be taken to a separate screen where you will have to take on the group of enemies that want to stop you. Before you can damage them, you’ll need to move each of your characters into position so that they can use their regular attacks or special abilities at their disposal. You’ll only be able to move over the blue squares that pop up, and an enemy will need to be within range for you to target it. 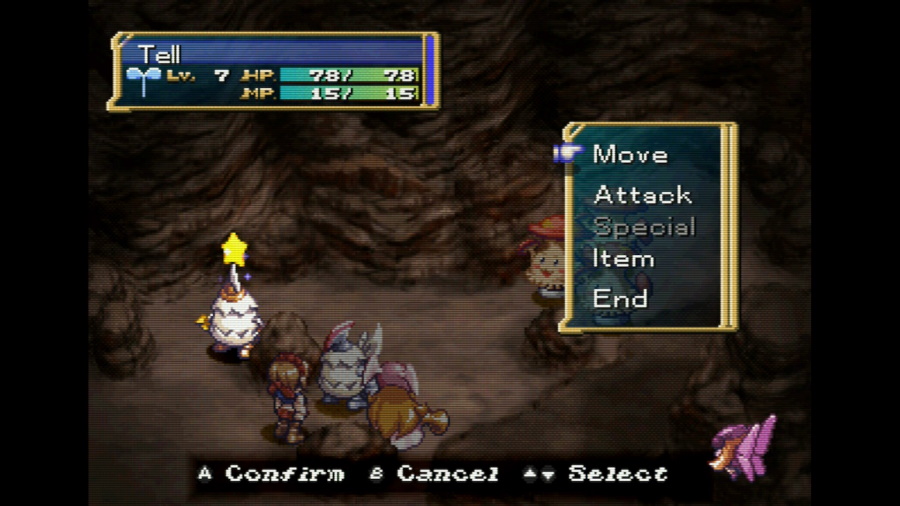 There’s also the option of using items during your turn, such as Healing Candy to recover some HP, an Antidote Bell to help a character recover from poison, or a yummy Heal Cocoa to help a character recover some MP so that it can then use this to activate one of its special abilities. Cornet can also try to escape from combat during her turn, but the odds of doing that are not good, so you should leave escaping as the last viable option in combat when you find yourself in an emergency.

When Cornet uses her horn in battle to cheer any puppets in the group that are within range, she’ll gain some Appreciation Points. The more Appreciation Points that Cornet has, the more powerful of a special skill she can gain access to in combat. This is why I suggest that you, during your first turn you always use Cornet’s horn to cheer on the puppets in your group so that you can be ready to use a powerful attack during the next turn that can target several enemies or use a healing skill in the third one if you choose to use the horn to once again cheer on your group. 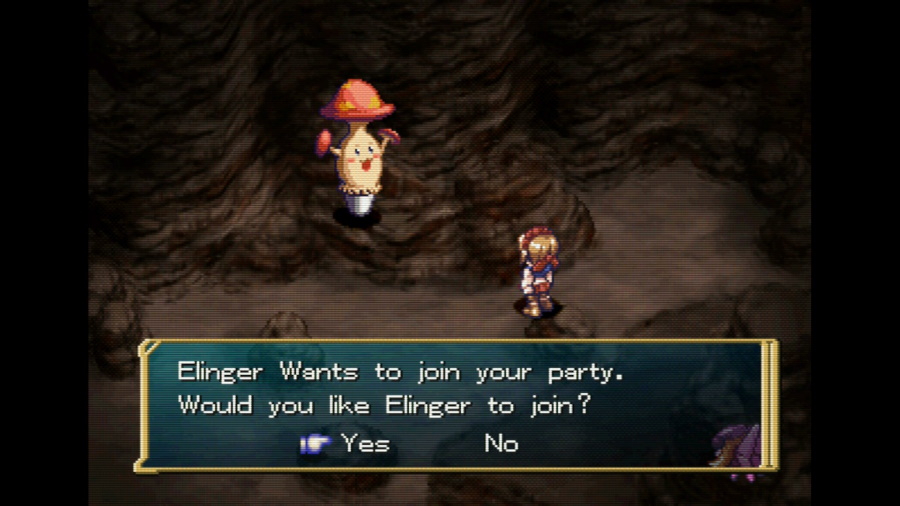 Along with having puppets in your group, you will also be able to recruit some monsters to your cause! Monsters are a good option for when you want to keep your puppets safe when they’re low on HP, and you don’t have enough healing items on you. When one of your puppets is defeated, you can go back home and fix them by spending some Inotium – the game’s currency. But when a monster runs out of HP, then that monster will be gone for good! Something else to consider is that you can sell monsters to the boy at the store in Mothergreen, which will reward you with some additional Inotium you can put to good use.

Something to keep in mind is that there are seven elements in the Kingdom of Marl that will come into play during combat. The elements are dark, holy, fire, water, wind, earth, and thunder. Thunder stands on its own, but the other six elements will be considered pairs of opposing forces. Because of this, the pairs are dark and holy, fire and water, and wind and earth. Attacking an enemy with an opposing force element will allow you to deal extra damage, but you need to be careful because the same can happen to your characters! 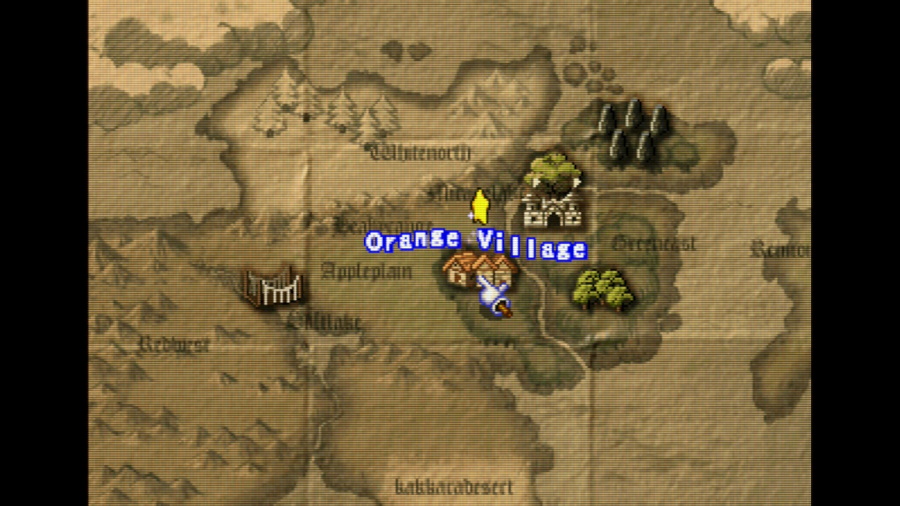 I enjoyed playing La Pucelle back when it was released on PlayStation 2 and took it for another spin when it was made available as a PS2 classic release on PSN, so I was definitely up for checking it out again on Nintendo Switch since it’s the revamped and expanded La Pucelle Ragnarok version. Rhapsody: A Musical Adventure is one I didn’t play back when it launched on the original PlayStation, so it was one I was looking forward to playing in this collection. I’m here to report that it’s a game that has stood the test of time, making for a very enjoyable musical RPG that checks all of the boxes for a classic JRPG of the era – random battles, turn-based combat, voice acting, solid sprite work, and a charming journey. Prinny Presents NIS Classics Volume 3 is out on Nintendo Switch with a price of only $39.99, which is a steal for all of the content you’ll get to enjoy with this pair of wonderful RPGs. 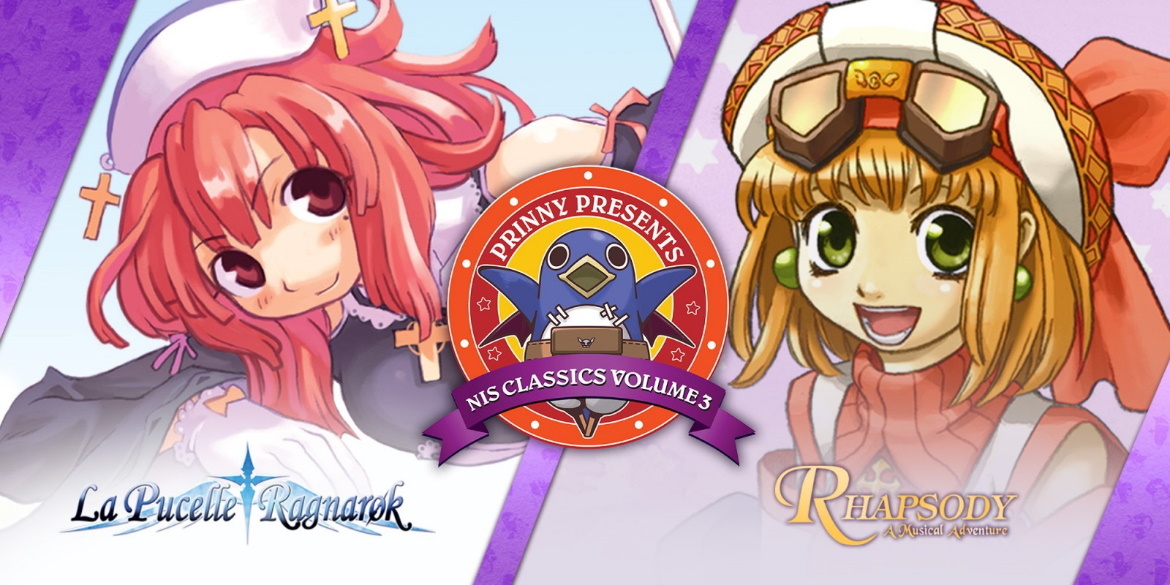 Disclaimer
This Prinny Presents NIS Classics Volume 3 review is based on a Nintendo Switch copy provided by NIS America.