Bunny Park from Soedesco and Cozy Bee Games is a colorful and chill experience in which you’ll be managing a park with one goal: to attract more bunnies. Check our Bunny Park review!


Bunny Park from Soedesco and Cozy Bee Games is a colorful and chill experience in which you’ll be managing a park with one goal: to attract more bunnies. There’s no story for this one other than “bunnies are cute, they want to have fun, give them fun… go!” It’s a very casual experience that will help you relax and unwind on Nintendo Switch. You’ll start with some materials to start building the park and will begin with a small goal so that you can learn all of the basics. 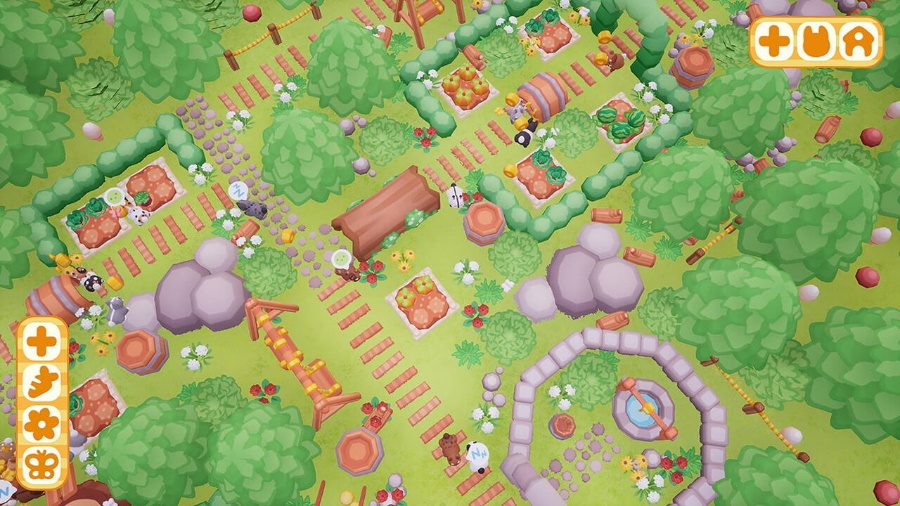 The first step will be to remove the stones, leaves, and logs that are on the way so that you can make some money from them. Why? Because a storm hit and spooked all the bunnies away while also leaving a huge mess behind at the park! Clean up the mess and get ready to start thinking about not only decorating the park but also expanding it. You’ll move the camera around the screen with the left analog stick, rotating your view with the L and R buttons as needed. There’s also the option of zooming in and out by using the ZL and ZR buttons.


You can control a marker with the right one to select what you’ll be interacting with as you press the A button. Press and hold down the A button, and you’ll be able to collect and remove any of the debris. Pressing the A button over a decoration will allow you to move it around. By pressing the Y button, you’ll switch out to the options on the left side of the screen, where you can start to work on improving and expanding the park. 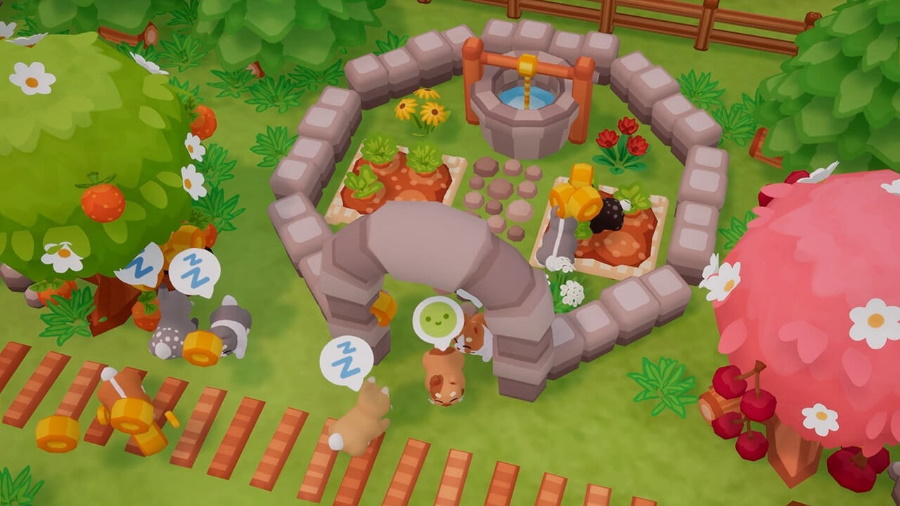 The bunnies that will be lured to Bunny Park will start to have fun. Once they’ve settled in, they will also need to be fed! A hungry bunny is a sad bunny, and sad bunnies won’t be digging up around the area to try and locate some coins for you! You should also pet them every now and then to raise their happiness, but you do need to be gentle so that you don’t end up waking up the bunnies! And as you clear debris and place decorations, you’ll gain Cute Points. Feed the bunnies and pet them, and you’ll receive Cozy Points.


Cute Points and Cozy Points will allow you to level up as you aim to get a five-star rating for your efforts. The more popular your park gets, the more bunnies it will attract, and you’ll be able to take care of them so that they’re happy and dig up more coins for you so that you can keep the cycle going. You’ll need to alternate between buying food for the bunnies, then setting up gardens where food regrows at a steady pace, and then spending some of your coins to purchase new decorations. You’ll then be able to expand the park and carry on with the resource management cycle. 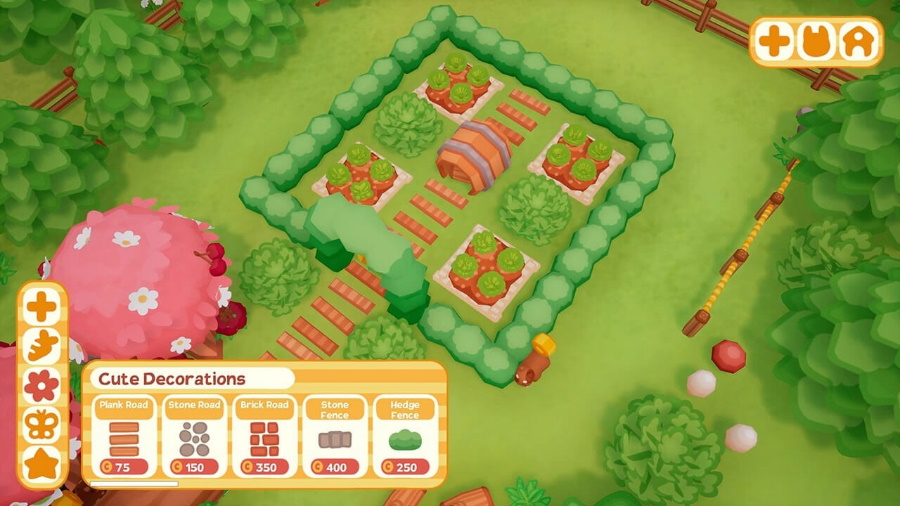 While this is a relaxing experience, there’s always something that needs to be taken care of, and since you won’t be able to work on everything, you’ll need the help of the Bot-Terflies! You can buy different Bot-Terflies with the coins you collect, and each one will have a different objective to work on. Some will help with the whole cleanup process, others will allow you to collect additional coins, and others – while expensive – will take care of boosting the coziness by caring for the rabbits in the park.


The game is not without issues. The gameplay loop is closer to that of what we now know as clicker games, which means it’s not going to be very enticing for some gamers. On top of this, the initial cycle is very slow since you’ll start with the one bunny visiting the park, which means you won’t have many coins to collect to be able to purchase more food for the bunnies, more items to decorate the park, and more Bot-Terflies to help you out. And that’s when you’ll run into another issue.

Since the marker is used for petting bunnies, moving decorations and food around, removing leaves, logs, and stones AND collecting coins, you’ll need to get used to how the game registers said coin-collecting action. You’ll need to wiggle the marker around over a coin at a slow speed so that the marker changes and registers that you’re trying to collect a coin. Do this too fast, and the marker won’t change. Do this too far away from the sweet spot for a coin, and it won’t register. You get used to this, and once you get some Bot-Terflies to help you collect coins, it won’t be an issue. 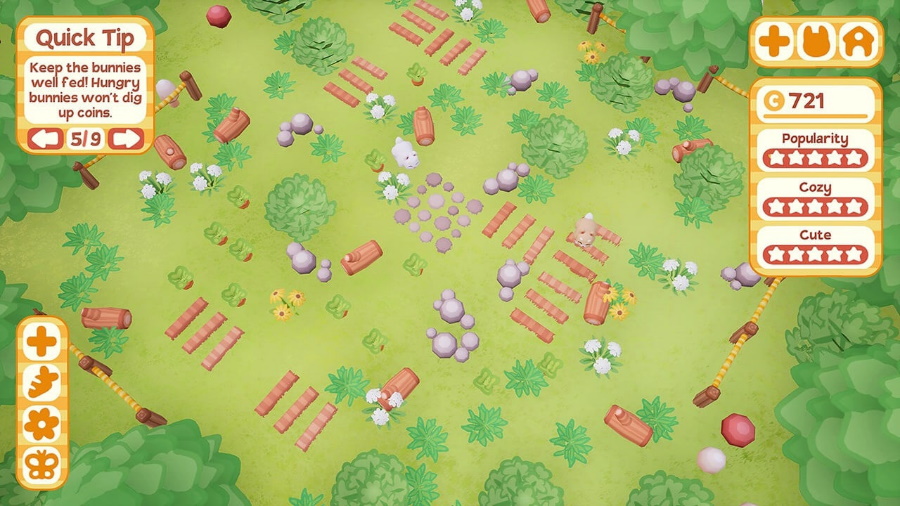 Bunny Park is a colorful and chill experience on Nintendo Switch as you improve and expand your park to lure as many bunnies as possible. There’s no end game per se for Bunny Park other than optimizing your operation by adding more Bot-Terflies and adding all of the decorations you want to design the park that your heart desires. Sure, there are 25 different bunnies in total to lure to the park, but that’s about it. This is a casual management sim experience, and there’s nothing wrong with that since it’s something favored by some gamers out there. Bunny Park is available on Nintendo Switch with a $19.99 asking price. 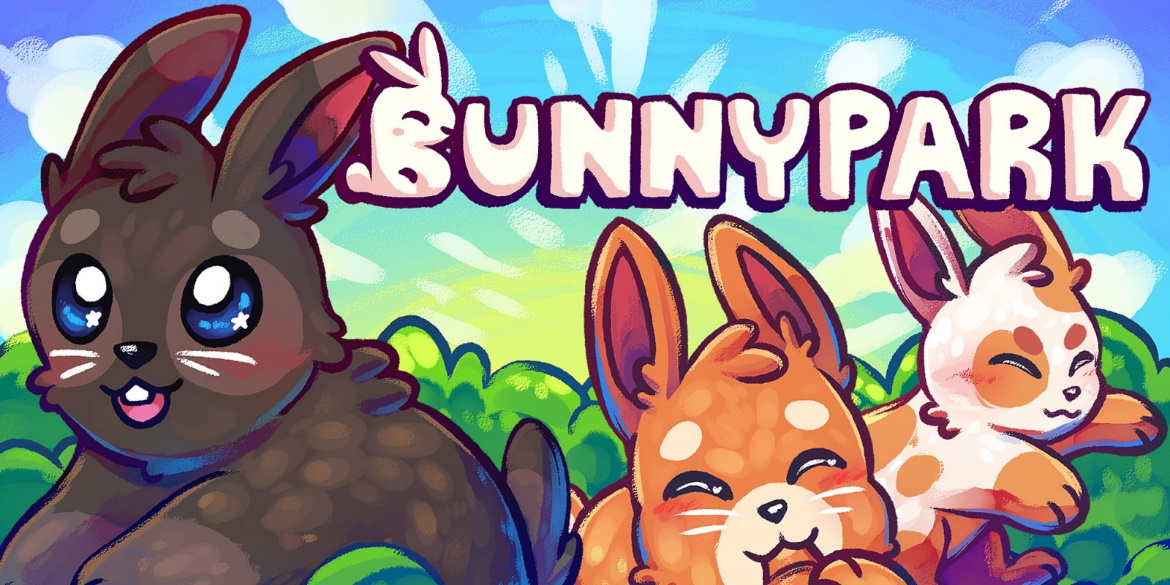 Disclaimer
This Bunny Park review is based on a Nintendo Switch copy provided by Soedesco.