This is a double review for Unichrome: A 1-Bit Unicorn. Ceidz and EdEN played the game, and this review presents what they both had to say.

Unichrome: A 1-Bit Unicorn from Super8BitRafa and Ternox Games is a platformer in which an evil unicorn steals the world colors. You immediately run after the evildoer but will have to complete many levels with a ton of enemies and bosses along the way before finally reaching the final boss.

One thing that I immediately liked was the great level of design that rewards exploration and equally punishes bad decisions. Take a wrong path, and you’ll drop way below and be locked out of a collectible unless you restart the level or can get from the last checkpoint. The levels can generally be completed in a few minutes unless you are having a hard time with the challenges. Speaking of the difficulty, things get more challenging at a steady pace, and things never feel overwhelming. It never gets out of hand, and when you die, you will instantly be taken you back to the last checkpoint, and you do not have a limit of lives. 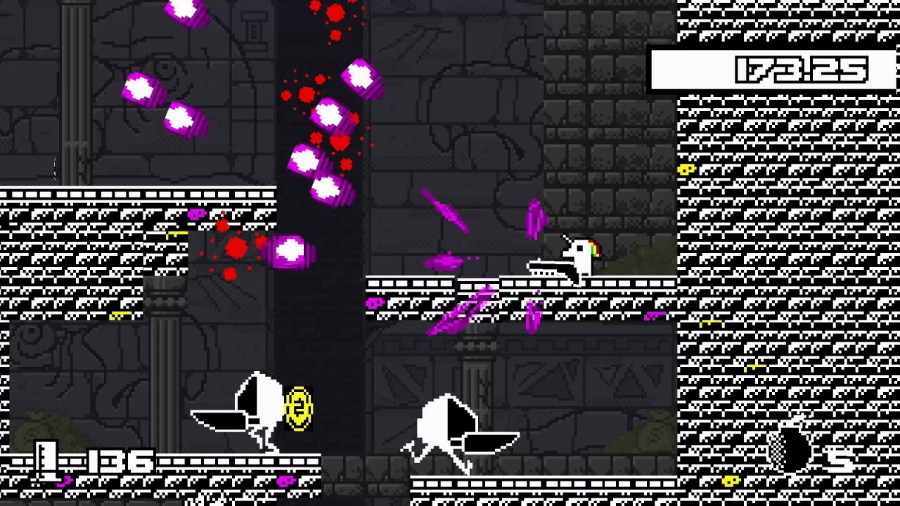 Another aspect that I loved in the PlayStation 5 version is the use of the DualSense controller. You’ll feel the floor texture as you walk, and the adaptive triggers are also used perfectly, with each weapon having a different trigger resistance. Since this game is Cross-Buy, the PlayStation 4 version is also included. As expected, it has a more basic vibration scheme since the PS4’s DualShock doesn’t have many possible different vibration settings.


The graphical presentation is good, with a pixelated low-resolution aim – hence the game’s title. I noticed a few grammatical errors in the text, and the game’s volume was very low compared to the volume for the PlayStation 5 itself, so when you’ll eventually end a gaming season, the PS5 dashboard will most likely be too loud for comfort. 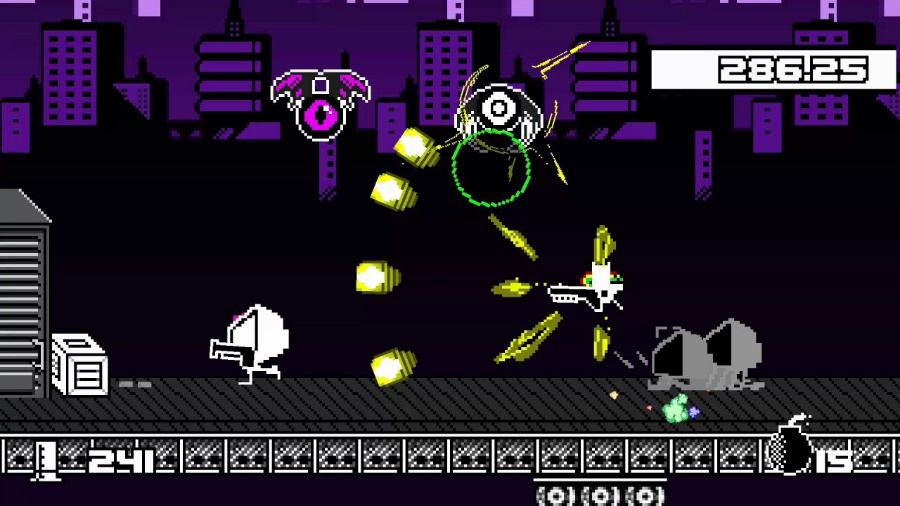 On the technical side of things, I do have to mention a few issues I met as I was reviewing this title. I noticed that many enemies had a black box around them, which means that their sprite transparency was not properly configured. I also have to mention the performance of the PlayStation 4 version of the game, which suffers from frequent slowdown. The unicorn will often do the sound effect it does when it’s damaged as you end a level, which was weird. I also had a hard time using the Grapple tool, which was capricious, sometimes not working until I selected to restart the level from the pause menu.


I liked playing through Unichrome: A 1-Bit Unicorn and can definitively recommend this game. I liked the setting, and the inclusion of the DualSense vibration and adaptive triggers on the PlayStation 5 version was a definitive plus for me. Hopefully, the issue with the grapple tool can be patched since it can be a bit annoying.

As Ceidz has mentioned, in Unichrome: A 1-Bit Unicorn Adventure, you’ll be playing as the titular unicorn who must find the evil unicorn who has stolen all the colors from the world. It’s up to you to defeat each boss to recover the color gems to bring everything back to life! As you go through each level, defeating mostly the same enemies over and over again, you’ll collect a ton of money – in change – as well as proper coins to add to your riches. More on what you can do with the money in a bit.

How will you play Unichrome: A 1-Bit Unicorn Adventure? You control your character with the left analog stick, jumping with the X button. The longer you press and hold down the button, the higher you’ll jump. Once you get the Rainbow Cannon at the end of the tutorial, you’ll be able to shoot with the Square or R2 buttons. The Rainbow Cannon has unlimited ammo, but every weapon you collect after it will require you to collect some ammo to keep them going. You can cycle between weapons with the Triangle button. 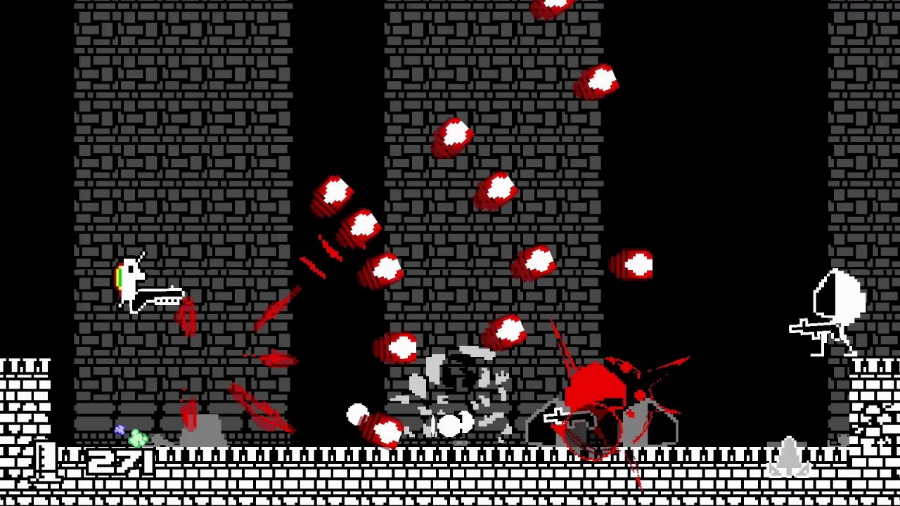 The many coins you collect in each level as you platform away – and the ones obtained from defeating enemies – can be used at the raccoon’s shop to upgrade your weapon. A triple-barrel shotgun is good, but a five-barrel one is better! You could also decide to have sawed-off barrels for it so that you deal more damage and have less of a kick. Or maybe you feel like some extra bombs are needed to get the job done. As you unlock more weapons, you’ll also have to purchase more upgrades, and you’ll also be able to purchase extras of the items you can use to deal extra damage to enemies. Late in the game, having some extra stationary turrets will make a huge difference during boss fights.


Since this title is Cross-Buy, and you get both the PS4 and PS5 versions with your purchase, that means you can work on the trophies for two separate trophy lists if you own a PlayStation 5 console. And since this one has a full trophy list, you could have two new Platinum trophies in your collection! The list is split into 4 Bronze trophies, 9 Silver trophies, and 8 Gold trophies. There are no missable trophies in this one since you can go and replay any level as you please. There’s one trophy that might require a bit of grinding since you need to have 1,000 coins on you – and as a heads-up, this one popped for me when I was closer to 1,100 coins. Another trophy requires you to collect 20 of the 25 bonus unicorn shoes, which can be used to unlock additional game modes and other stuff in the special Extras menu. You can check out this Unichrome Trophy Guide to speed things up. 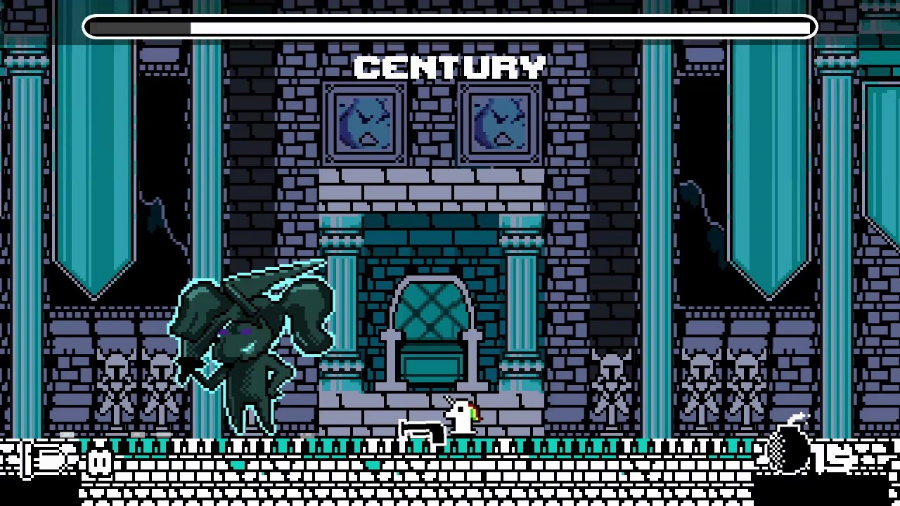 Unichrome: A 1-Bit Unicorn Adventure is a fun 2D action platformer that will keep you busy from start to finish. There are plenty of new weapons to unlock, some story twists that introduce new gameplay mechanics, and a Platinum trophy for trophy hunters out there to aim for. Do know that the voice acting is below average. It is a nice touch to have it included, but it’s certainly not something that would be missed if it was not there. Also, if you get the bug with the grappling hook, you won’t be able to progress unless you pause the game and select to restart the level, which can be a bit annoying during your trophy run. Unichrome: A 1-Bit Unicorn Adventure is available as a Cross-Buy title, so your $14.99 purchase will give you both the PS4 and PS5 versions of the game at no extra cost. 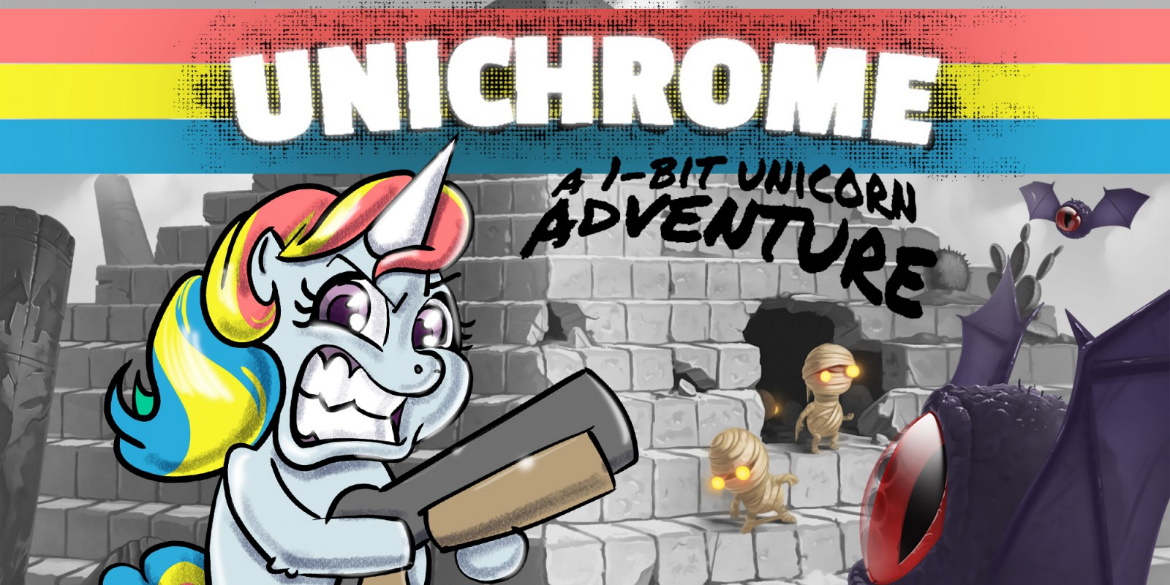 Disclaimer
This Unichrome: A 1-Bit Unicorn review is based on PlayStation copies provided by Ternox Games.

The Legend of Heroes: Trails from Zero Out Tomorrow