Destroy All Humans! 2 – Reprobed by Black Forest Games and THQ Nordic is a remake of the PS2 game from 16 years ago. The story takes place 10 years after the events of the first game. It starts with a KGB meeting, where they show the alien from the first game as being deceased, but also his clone that’s currently causing trouble in the United States. Since their race, the Furons, is seen as a threat to the KGB, they decide to eliminate them by sending a nuclear missile on their mothership in space. Luckily enough, Crypto’s commander was able to download his consciousness into a holographic unit that Crypto would rescue after dealing with a few KGB agents. From there, his mission will start by trying to find out what happened to the KGB agents to be after them, but it will evolve into something much bigger as there seem to be other alien species on Earth other than the Furons. 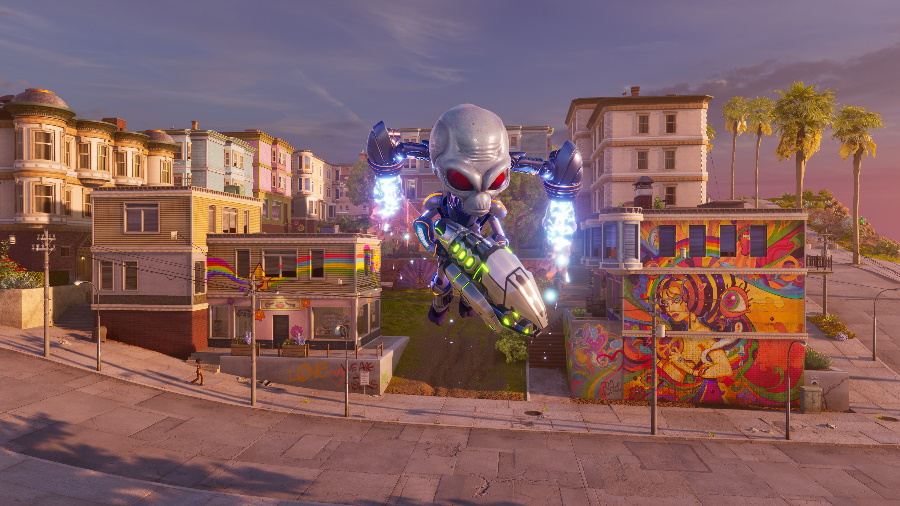 The game is played from a third-person perspective, where you move around with the left analog stick and control the camera with the right one. The X button is used to jump and also to trigger your jetpack for some brief flying. The Circle button is used to dash, while the Square button is used for a Brain Extract. The Triangle button will be incredibly useful as it allows you to body snatch to hide your alien form in the body of a human. This will be used to prevent people from alerting the police of your presence, as well as to have conversations with some people that will reward you with information for your missions. Aiming and shooting is done with the L2 and R2 buttons, respectively, which, unfortunately, does not take advantage of the DualSense’s adaptive triggers. The L1 button will bring up the wheel to change your weapon, while the R1 button s used for psychokinesis to move objects or people around.


Most of the missions will start with some dialogue, whether it’s with your commander or a human that will provide some information, and then you’ll be off to complete your objective in the city you are in. The screen will have a mini-map to help you know in which direction to go, and you’ll also be able to see your objective as well as some optional objectives that you can choose to complete during the mission. Then it will be up to you to decide how you want to tackle the mission, trying to stay undercover disguised as a human or blasting your way through as an alien, although this will raise the alert level about you. 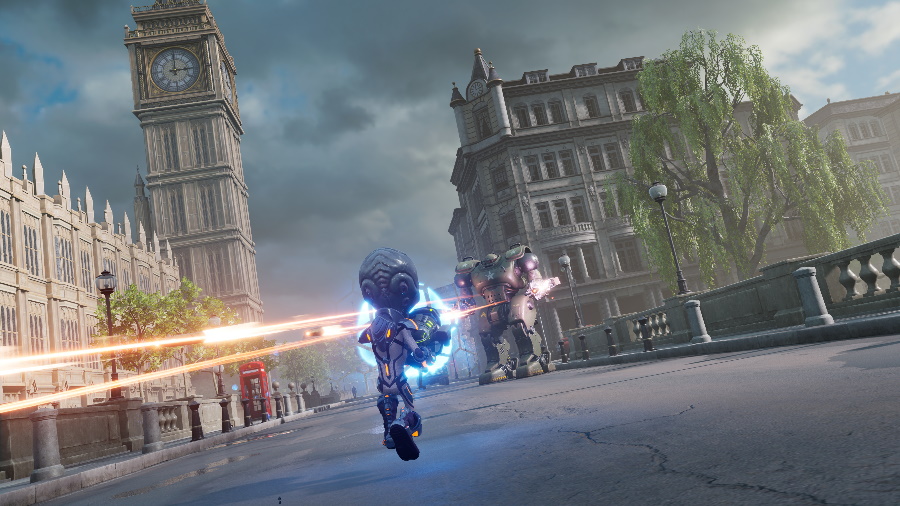 As for how this one looks, the game obviously has had some nice upgraded visuals compared to what it was in 2006. At the same time, after almost two years into the PlayStation 5 lifecycle, even in its upgraded version, the game doesn’t feel on par with what the console can offer. I also encountered a few issues where I couldn’t really control the camera anymore, and it just went where it wanted to go, which is far from ideal.


Having completely been passed by this franchise, I was curious to see the kind of gameplay it could offer. The first thing that struck me when I started playing was the dialogue. It felt empty, as if they were just lines being read one after the other instead of being an evolving conversation between Crypto and other NPCs. I also had an incredibly hard time listening to Crypto’s voice because it sounded more like a cowboy out of Red Dead Redemption than an alien. 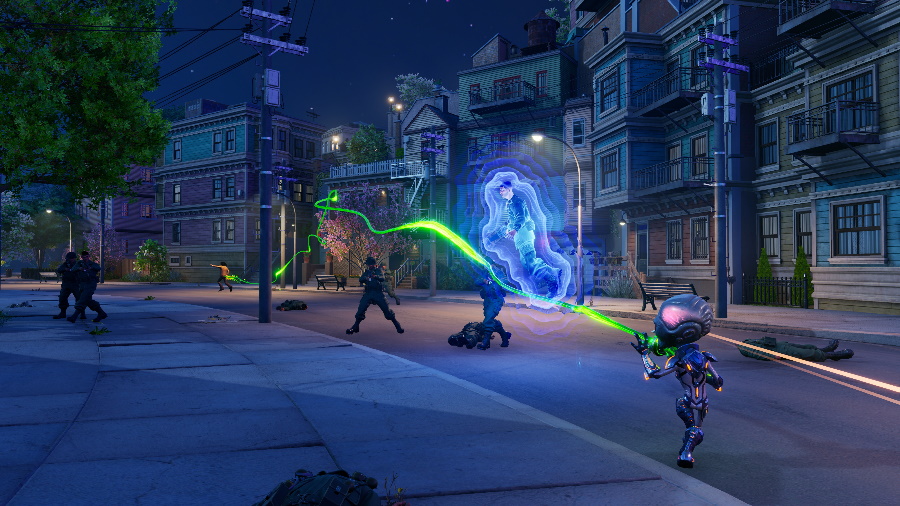 As for the gameplay itself, the fun was mostly with the fact that you could slam and toss humans around when going against them. The rest of it was mostly your standard third-person action game experience, of which we’ve seen a ton of games since 2006, mostly in improved versions of what was done back then. The weapon selection was also interesting since it provided some cool things to do to your enemies, in a similar fashion that the Ratchet and Clank series has been doing, just not with the same level of polish and quality.


As for the trophies, there’s about half of the list that you’ll be able to get by simply progressing through the game while completing the story and side missions. The rest of the trophies will present to you a bunch of miscellaneous objectives that you can easily complete in free roam after finishing the story by reading the trophy description. 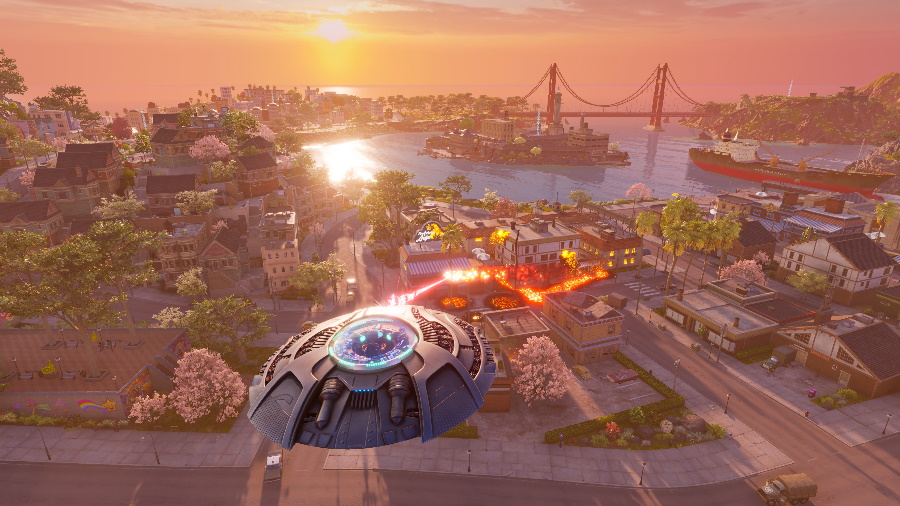 Destroy All Humans! 2 – Reprobed is a remake that will likely please fans of the original game that want to replay it with upgraded visuals… but this is likely the only audience that will truly appreciate the game. Unfortunately, the upgraded visuals don’t save the game from its bland story and generic third-person action game that’s been surpassed countless times in a wide array of games currently available on the platform. Destroy All Humans! 2 – Reprobed is out on PlayStation 5 with a $39.99 asking price. 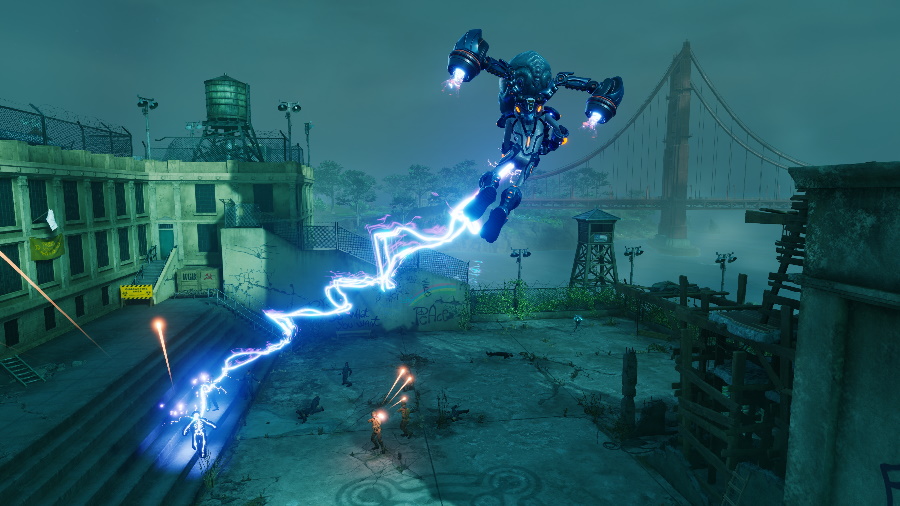 Remake that could be of interest for fans of the original

Disclaimer
This Destroy All Humans! 2 – Reprobed is based on a PlayStation 5 copy provided by THQ Nordic.