Last Beat Enhanced from 7 Raven Studios is an old-school infused action-packed beat ‘em up PlayStation 4. You’ll be taking on eight levels as you aim to vanquish the Mad Stroke Gang once and for all. As you can tell from the game’s trailer and the screens in this Last Beat Enhanced review, this sidescrolling beat ‘em up features a minimalist pixel presentation. You can play this one on your own or take on the Mad Stroke Gang in local co-op as you defeat enemies, avoid hazards such as hot steam or spinning buzzsaws, collect weapons to increase your damage output, and grab as much money as possible. 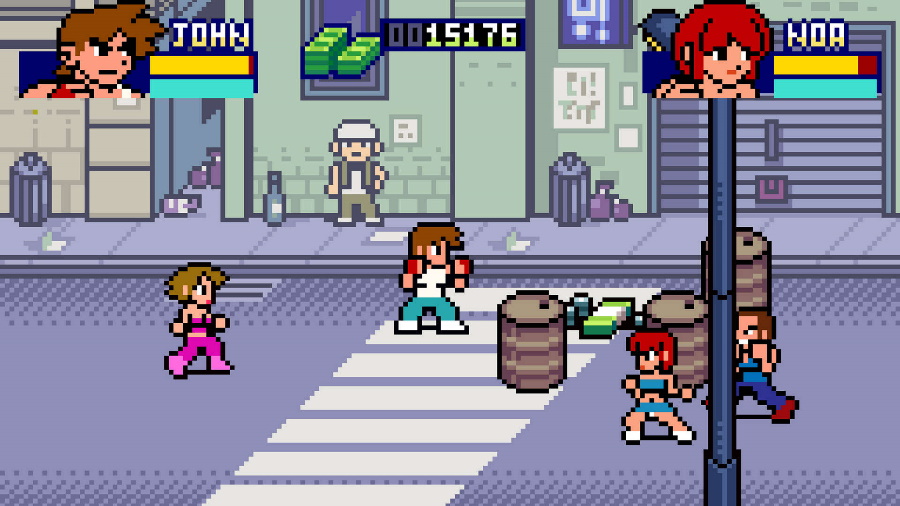 You start with only a single life bar – and only one life – so you’re going to have to learn from your mistakes and get good! You do get a chance to review your character if you have enough money, which is why it’s important that you collect all of the money you find – including that inside of secret areas – and work on having a high combo since the higher your combo, the higher your multiplier, which will have an effect on how much money you get by beating up and defeating each enemy.


There are five characters to play as, and each one will have different stats for their attack, speed, and special attack values, as well as different attacks to consider. There’s John, Noa, Din, Ares, and Zari, but Ares and Zari will first need to be unlocked by collecting enough money to cover their fees. Ares is the most balanced of the bunch. Noa favors speed. Din is the one with the most powerful attacks. As for the unlockable characters, Ares has full power and special attacks and two points in speed, while Zari has full speed and special attacks and a two for attack power. 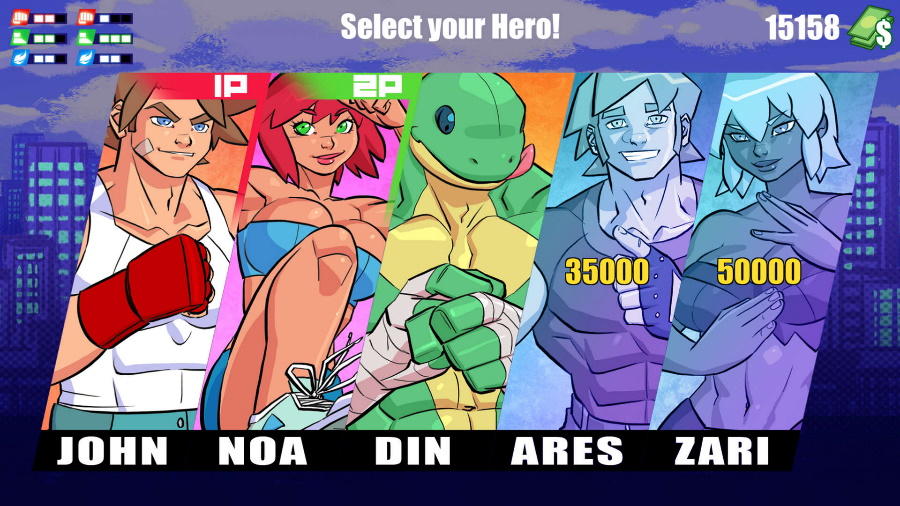 
If you need to use a special attack, just press the Triangle button. The special blue bar must first be full, but the good news is that this bar will fill up over time, so if you can use it against a group of enemies, then attack those near you as the bar fills up, you’ll be able to dash out harm’s way for a few seconds so that you can then use the special attack again. Your special attack is crucial since it can deal considerable damage to enemies while clearing the way for you to set up some combos. Get close to an opponent, and you’ll grab it so that you can then throw it at other enemies, dealing damage and dropping them to the ground. 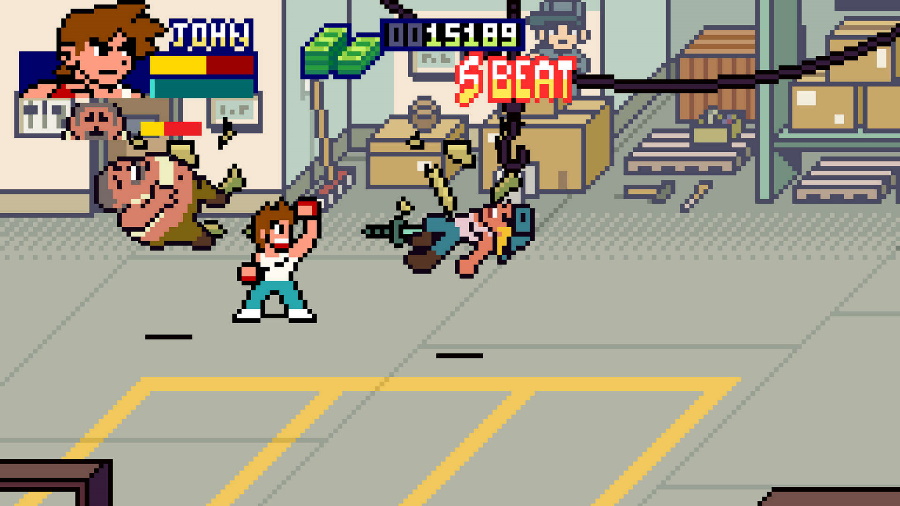 As you earn money, you’ll be able to use it to upgrade your characters. You can increase the speed at which the special bar charges up, add one half or a full extra health bar, or double the damage dealt by attacks. The money you collect can also be used in the Image Gallery section to unlock several special pieces created for the game. You can unlock cover artwork, poster artwork, cast concept art, a bunch of character card art, several tribute images, as well as some pixel vs. HD artwork images.


The game has a full trophy list with a Platinum trophy. You’ll be working on unlocking 2 Bronze trophies, a single Silver trophy, and 10 Gold trophies. The objectives to complete include defeating 10 enemies in a single run, completing the first area, finding the first secret area, dying once, reaching an x3 multiplier, defeating four women in a run, defeating four men in a run, completing the first bonus stage, eating a pizza, breaking 10 objects, buying an item in the store, using a special attack, and being reborn once. 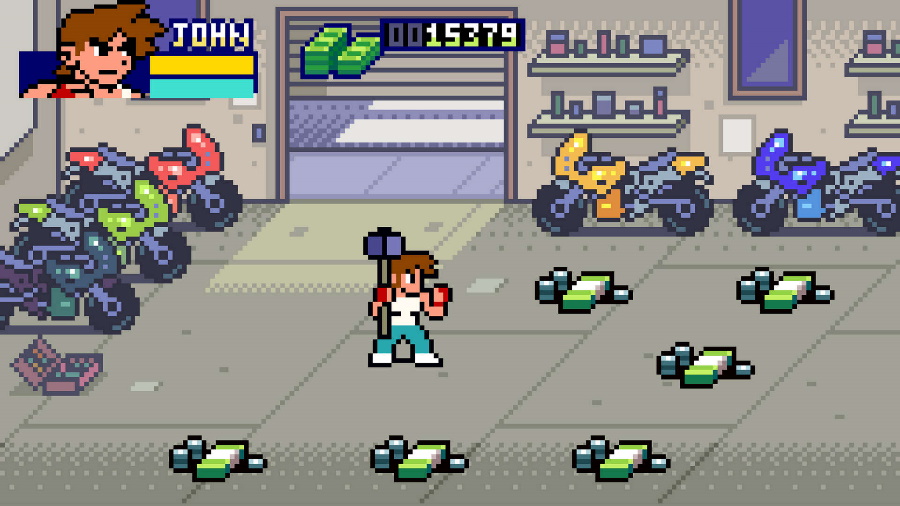 Last Beat Enhanced is a fun old-school infused action-packed beat ‘em up that can be played in single-player or in local co-op as you take down the Mad Stroke Gang. With eight stages to play, five characters in total, easy-to-understand gameplay mechanics, a minimalist pixel art style, and a full trophy list to work on, this is an easy one to recommend on PlayStation 4. Last Beat Enhanced is out on PlayStation 4 with a $9.99 asking price. 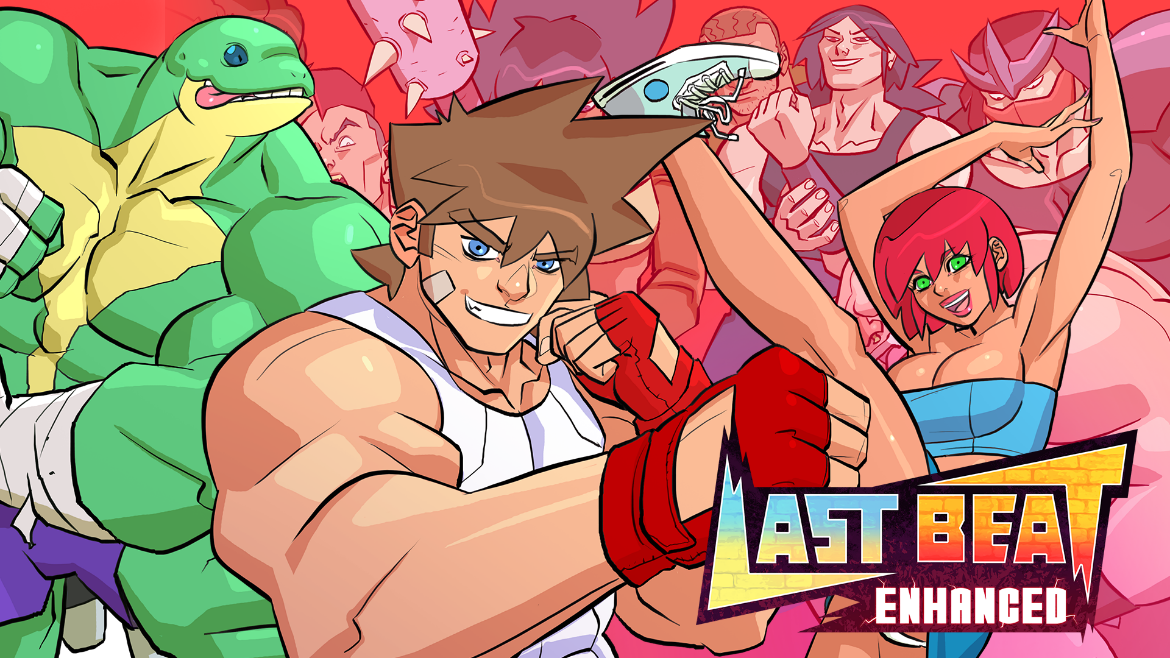 Disclaimer
This Last Beat Enhanced review is based on a PlayStation 4 copy provided by 7 Raven Studios.

[PlayStation 4] The Legend of Heroes: Trails from Zero Review

The Legend of Heroes: Trails from Zero Out Next Week