Akane from DX Gameworks and Ludic Studios is a fast-paced neon-tinted hack-and-slash on PS4. Learn more in our Akane review! 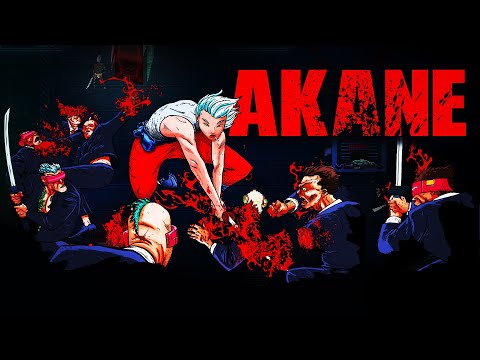 Akane from DX Gameworks and Ludic Studios is a fast-paced neon-tinted hack-and-slash on PS4. Imagine that bit in Kill Bill Volume 1 where the bride has to fight against The Crazy 88 gang. Now imagine that with a Hotline Miami-style gameplay where everyone, including you (save for a few heavys), can all be felled by one hit, and you will essentially get what Akane is all about. Akane is a frantic twitch-heavy game that tests your reflexes to the max. You play as the titular character, a woman who is out for revenge. She plans to die tonight, but the only question is how many enemies she can take with her before she dies.

Armed with a sword and a gun, the combat of Akane is quite interesting. Using the left analog stick or the D-pad, Akane runs frantically around the square map, slicing at enemies with the Square button whilst avoiding attacks herself. Just don’t swing too much, or you will run out of stamina quickly and have to scurry with a dash to safety by pressing the X button so that you can rebuild stamina whilst an infinite supply of enemies rushes at you. As previously mentioned, you also have access to a gun of your choice. Hold down the L2 button, and you are fixed to the spot, and the left analog stick allows you to aim to shoot with the Square button. Using the gun is only a gamble when you unintentionally run out of ammo, as more often than not, it can be used to get you out of a pinch and becomes a viable tactic, especially when you consider the different types of guns you can ultimately gain access to. 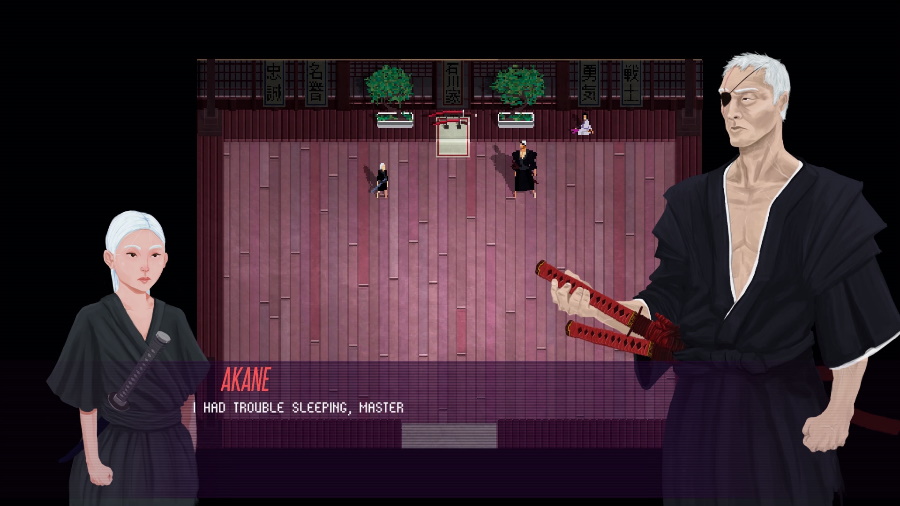 In my opinion, the humble starting pistol is by far one of the better options, and that can be said for a lot of the equipment in the game. Upon starting a run, you are given a number of objectives you would need to complete within the current run in order to unlock new equipment. Whilst each one is varied and allows you to consider new ways of playing the game, and a lot of the latter guns and equipment vastly improve your experience, the earlier ones do not feel worth your time. There is a lot of “Your mileage may vary” for this one, and you would need to experiment a little to find out what works for you.

One frustrating element that must be addressed is the fact that you can only unlock items in each category sequentially. For example, if the next item on the list requires you to do a 50-hit combo and the one after that requires you to kill 100 enemies, it does not matter how many times you kill 100 enemies in a run since if you do not complete the preceding requirement, you will not be able to unlock that item. This just feels like an attempt at artificial longevity on the game’s part, and if we are being honest with ourselves, the game needs it.


There really isn’t much content to be had here. You only have one arena to work your way through, a handful of enemy types, from the basic mooks, to the tanks, to the Boss. Please note the singular usage of Boss there, as there really is only one Boss in this game. Upon defeating 100 enemies, you will be sent into a 1-on-1 fight against Katsuro, a fancy-looking samurai dude who admittedly gives you a bit of a challenge and an interesting fight. On the plus side, when you see him again, he “levels up” and gains new abilities and attack patterns, but on the downside, at level 5, he maxes out, and no matter how many times you fight him, it is the exact same Boss, challenge and move sets you have grown acclimated to in previous runs.

The worst part is you can end up facing him multiple times in the same run doing the exact same Boss fight over and over again because every hundred enemies you kill nets you a Katsuro fight. In theory, you can just end up doing the exact same thing ad nauseam. And nauseating it becomes as, during the latter challenges, the requirements get incredibly tedious and monotonous as you repeat the same fights over and over again only to unlock new items that are not that inspiring. 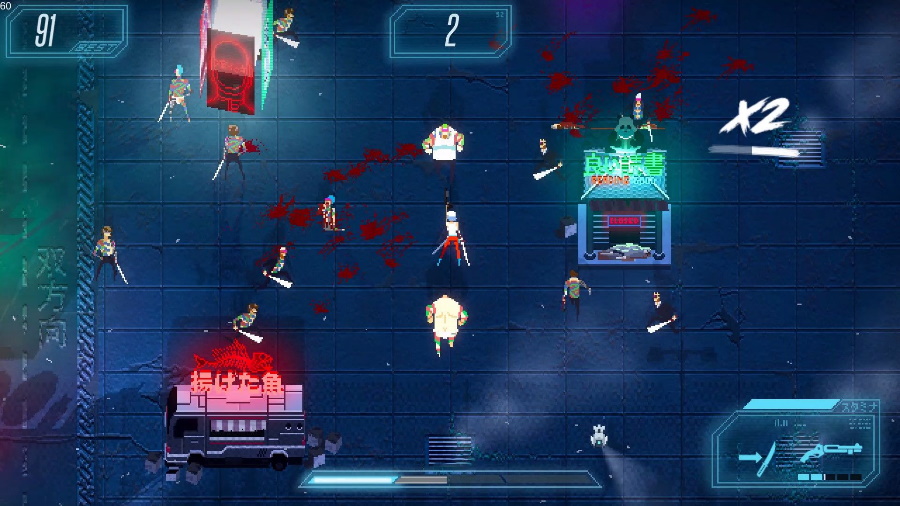 Yes, a lot of the inspirations and references are good when you spot them, but the content here is just so lacking it is disappointing. Even the soundtrack, which starts off great, begins to grate after you hear the same three tracks for the umpteenth time. The visuals are nice to look at… to a point. The rough anime style in pixel art strangely works and rides the fine line of outstaying its welcome with style.

In fairness, the game is $5.49, so DX Gameworks is not out to gouge you. The game is what it is and does not try to pretend to be more than that. There is a lot of style here, a lot of flash, and a lot of pomp. This is exemplified by your finisher that you can occasionally perform where upon killing enough enemies in quick succession, you are able to build up your dragon meter for up to three bars. If you have enough energy, you can spend one bar to use the dragon slash to cut a line through your enemies. In my opinion, this move, like the overall game, sounds good but never executes quite as intended. Alternatively, you can build up all three bars and use all of them in a flashy move that eliminates all enemies on screen in one fell swoop, which summarises how this game should be played, play it once or twice, learn what it has to offer, and be done.


Unless you’re a trophy hunter, because then you’re going to be spending some extra time with Akane! The game has a full trophy list with a Platinum, and you’ll need to work on 23 Bronze trophies, 6 Silver trophies, and 5 Gold trophies as you complete the tutorial, and then work on unlocking each and every additional katana, gun, and gadgets in the game, as well as the different cigarettes, so that you can have a new Platinum trophy for your collection. 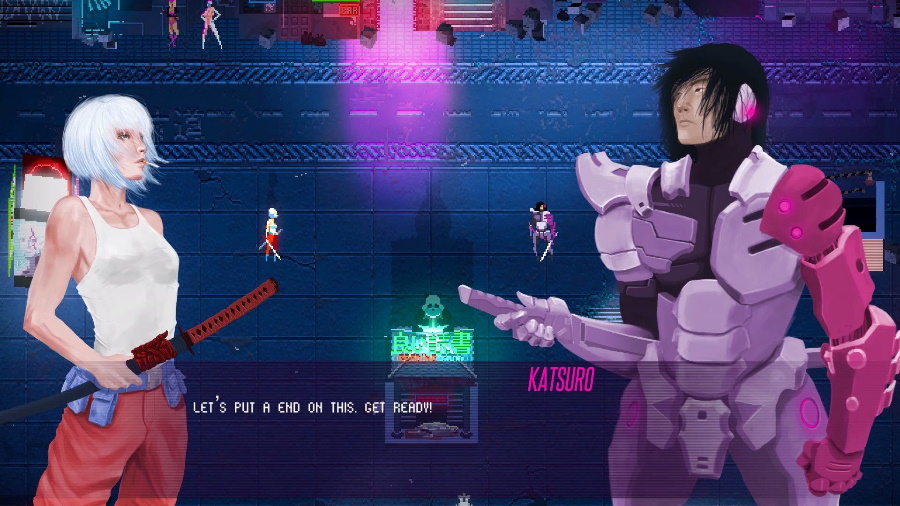 In summary, Akane is a middle-of-the-road affair. If you have a few minutes to kill, you can play a run or two as you learn the basics and see what the game has to offer. On the plus side, the load times between each restart are instantaneous, so no time is truly wasted here. Though arguably, the quick load times do seem to create problems for the next run you partake in, especially with the Boss Katsuro. When Katsuro performs a lot of his special moves, he leaves a pink trail across the paths he took, and these parts will linger on the screen for several runs afterward. Whether or not this is a stylistic choice can be argued, but what can not be argued is that time when the Boss’ dialogue from the previous run bleeds into the start of my new run, leaving me in an awkward position of trying to press X to clear the screen of text whilst trying not to die.

Yes, Akane is an okay time. It was an okay time when it was released so many years ago on other platforms, and it is still an okay time now. A lot of the problems that exist today exist in the original versions of the game, and no additional work has gone into preparing the game for its PlayStation 4 outing. Ideally, a statistical breakdown of previous runs could have been nice. Yes, the game keeps track of your best kills, best combo, and max “boldness” in a single run, but these feel meaningless…especially “boldness,” since the game does not explain what this means and what it does or why it is important, but you are graded on it and told it is important. Through some digging, I concluded it has something to do with kills with your guns, but it gets to the point where just like Akane’s wanton disregard for her own safety, you just don’t care. Akane is out on PS4 with a budget price of only $5.49. 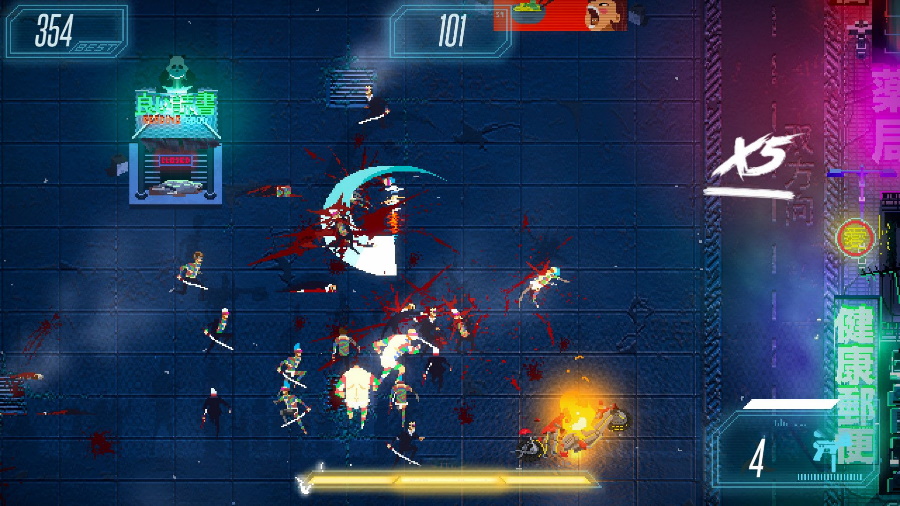 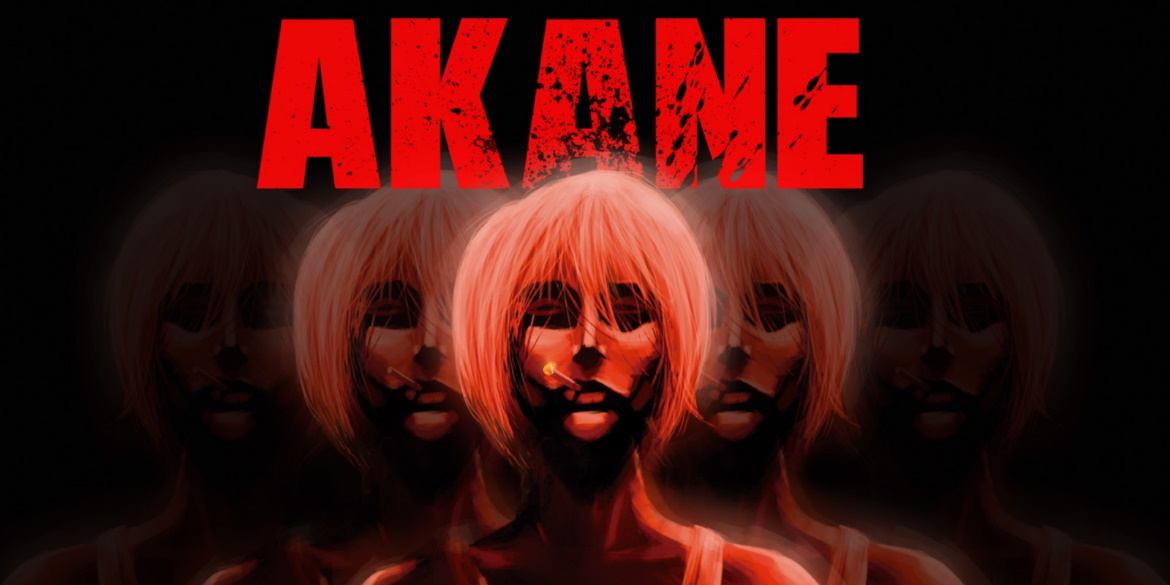 Flashy fast-paced experience that could use some extra substance

Disclaimer
This Akane review is based on a PlayStation 4 copy provided by DX Gameworks.