No Place for Bravery from Ysbryd Games and Glitch Factory is a challenging top-down action RPG with an interesting story and premise. You’ll be taking on the role of Thorn, an ex-soldier who has been through a cruel war. He decides to settle down as a tavern keeper but is still haunted by dreams of his long-lost daughter, Leaf. Until one day, he witnesses the reappearance of the one who abducted Leaf so many years ago. He decides to go on a quest to once again serve the blade and is joined by his disabled foster son, Phid.

Your journey through No Place for Bravery will examine the roles and duties of father figures and the consequences of their actions, and the choices made along the way. These elements are based on the personal life experiences and feelings of the game’s developers, wrapped within a captivating fantasy setting in a world that has certainly seen better days. Given the many battles you’ll take part in and the amount of violence you’ll experience, the game has received a Rated M for Mature rating. 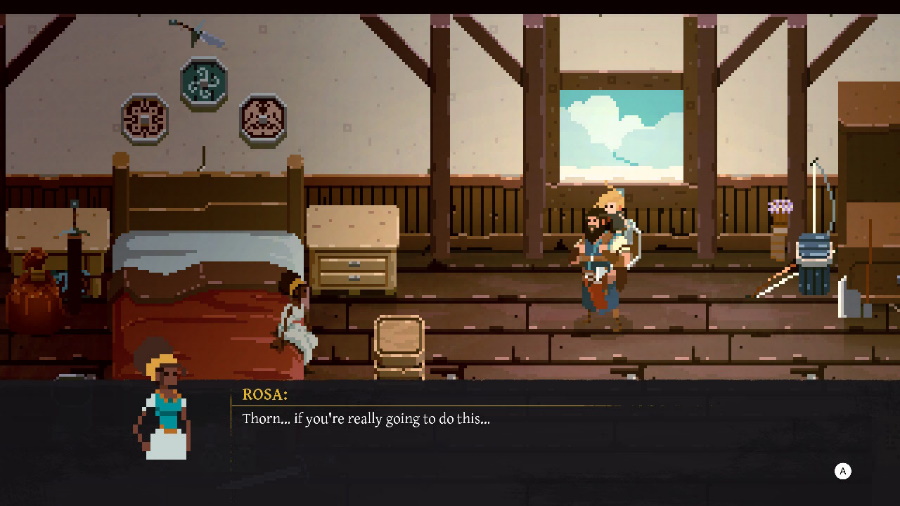 The game has some Soulslike elements, and, in order to survive, you’ll need to stay on high alert during combat so that you can make every hit count, dodge as needed, and find the right window of opportunity for dealing that final blow. You can play this one in one of three difficulty settings: Story Mode, No Place for Bravery, and You Are Not Prepared. Story Mode is for those of you looking for a more story-oriented experience. No Place for Bravery offers the standard journey with a good challenge to take on. You Are Not Prepared does its name justice by throwing everything at you, with enemies that will destroy you if you miss a dodge or don’t take advantage of a chance to deal the final blow.


There’s also the option of finetuning some additional elements to tailor your experience with No Place for Bravery. You can change Thorn’s overall health meter, as well as his defense and stamina meters. On top of that, you can change the damage meter to increase or decrease how much damage Thorn deals, as well as change the window of opportunity for you to successfully parry an enemy’s attack. By making some changes here and there, you can find the combination that feels right for you.

You’ll control Thorn with the left analog stick, pressing the A button to interact. You’ll attack with the Y button, using the X button to raise your shield to cover yourself from enemy attacks or to parry an attack when timed just right. The B button can be pressed on its own for a back dash or pressed when moving for dashing in a specific direction. The L and R buttons will be for skills. Pressing the ZR button will activate the quick menu in the lower right corner, which you can then use to press the A, B, X, and Y buttons to use the mapped skill. Pressing in on the left analog stick will allow you to lock onto an opponent. 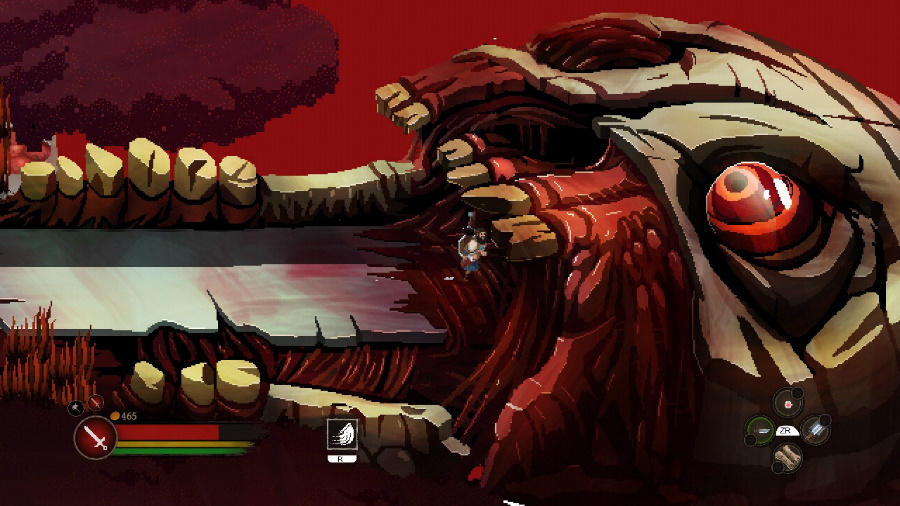 The D-Pad will allow you to gain access to different options. Pressing down will open up our map so that you can review where you’ve been and where you should be heading to. Press right to open up the glossary, where you can learn more about each character and the locations you visit. Pressing left on the D-Pad will send you into your inventory, where you can review your items, such as the restorative Meddygaeth, an herbal concoction – created by a tribe that no longer exists – which can instantly restore 70% of your health.


When in battle, you’ll need to pay attention to each enemy around you so that you can focus on the one that poses the most danger at a time. Knowing when to attack, dash, and parry is a must. Once you’ve managed to deplete an enemy’s health bar, they will sometimes remain in a fallen state. When this happens, you need to walk toward them so that you can interact with the A button to unleash the killing blow. Only slain enemies will have a chance to drop items, which you can then use to persevere and survive. 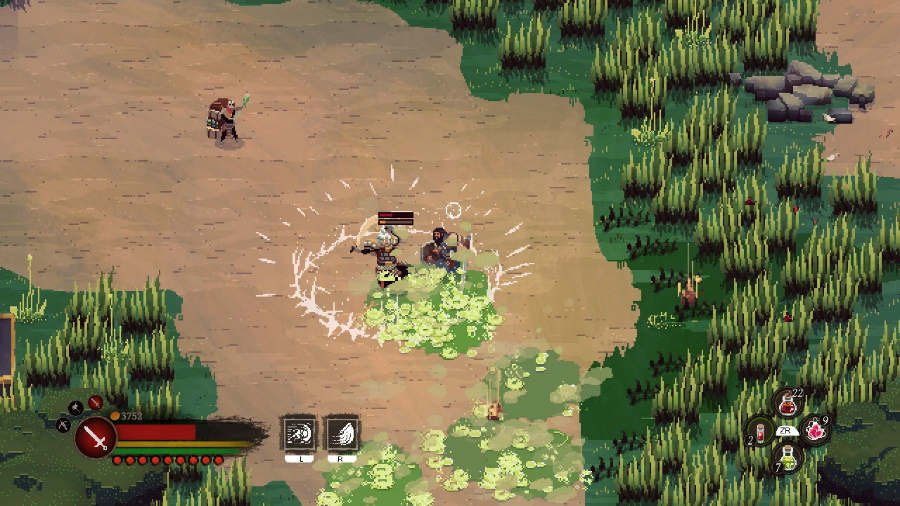 After you interact with a Battle Memorial, your progress will be saved, and your health will be restored. Once there, you can buy skills with the gold that you’ve collected. And along with needing to spend some gold, you’ll also need to sacrifice some of the artifacts you’ll find during your journey. As for the skills you can obtain, these include a special sidestep that will render Thorn invulnerable for an instant, a powerful shield attack that can throw enemies off balance, and a powerful long-range spinning hammer attack that will attack all around you as you keep the momentum going, or a mighty dash that will be followed by a powerful slam attack.


Gold can also be used to purchase consumable items and equipment to give you better odds of surviving this quest. You can purchase healing items to map to the quick items menu or other consumable items that can be used to deal damage to enemies from a safe distance or to have them walk right into a trap… literally! Use a bear trap and then lure an opponent towards it so that they’re caught for a moment while you take care of the rest of the group. Or maybe you’d like to purchase an acid potel that can be thrown at enemies to deal damage over time? 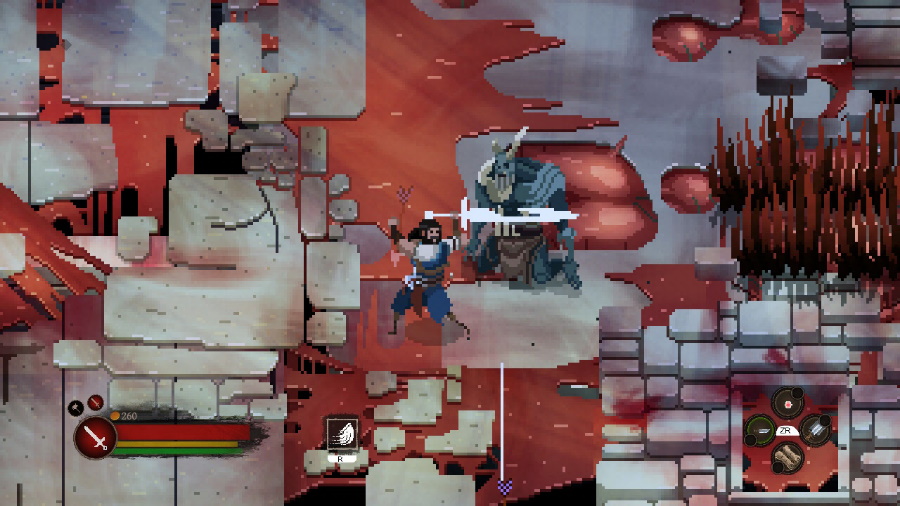 No Place for Bravery is a challenging top-down action RPG with a minimalist pixel art style that will grab your attention from the moment you start to play through the intro segment that gives you a glimpse into what Thorn has gone through. Be sure to interact with all of the white pages you’ll find here and there during your time with the game since they will unlock additional lore for you to review so that you can get a better idea of what has happened before in this world. The difficulty ramps up at a steady pace as you progress through the game, and the choices you make along the way will matter, changing how other interactions play out. No Place for Bravery is out tomorrow on Nintendo Switch at a $19.99 price. 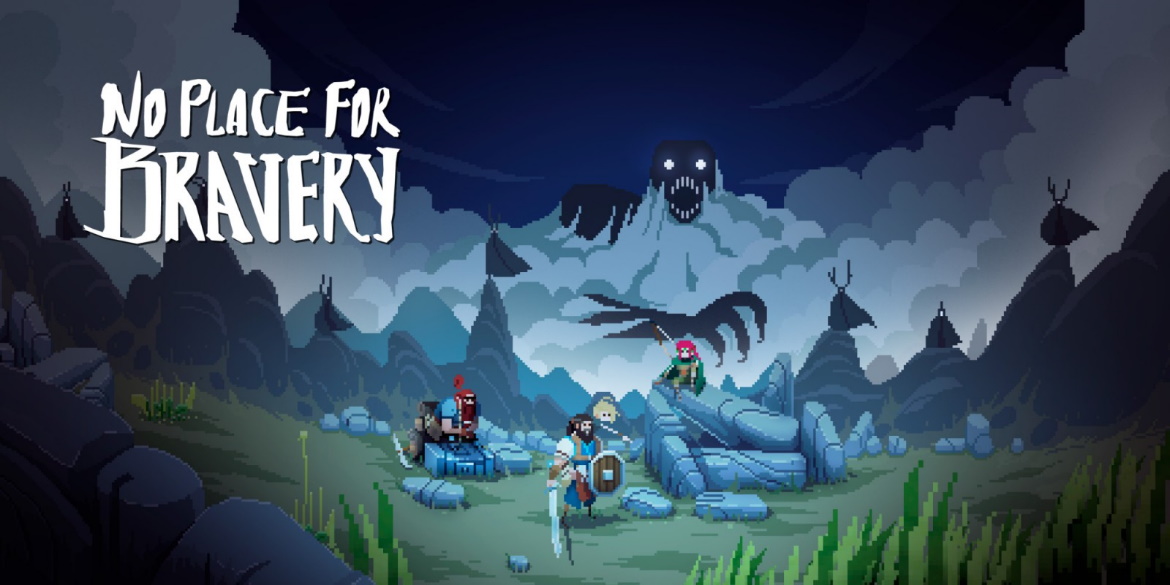 No Place For Bravery Review

Game title : No Place For Bravery

Disclaimer
This No Place for Bravery review is based on a Nintendo Switch copy provided by Ysbryd Games.