Retro-inspired side-scrolling shooter Horgihugh And Friends from Aksys Games and PiXEL is an expanded and revamped take on the 2019 shoot ’em up. After a Steam release, the game is now ready to go on Nintendo Switch. It tells a tale of an alternate version of Earth with anthropomorphic animals as its inhabitants. After a long period of peace, a brutal war takes place after one person’s assassination. After the war ended, the countries came to an agreement to dismantle their weapons. And then, the Gozareans invade Earth! One nation did not uphold the contents of the agreement and launched all of its forces against the invaders. Unfortunately, they were quickly defeated. 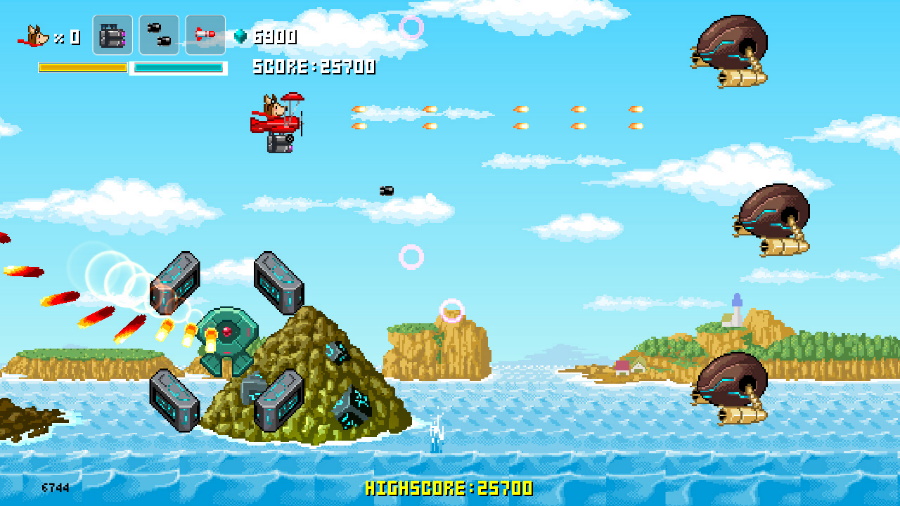 It’s then that seeing how the evil Gozareans’ invasion could end up destroying everything and everyone, that retired pilots Hugh and Figaro use their old-school fighter planes to fight against them before it’s too late. The game offers you the chance to play either as Hugh or take on the invaders as Figaro, which offers a Beginner Mode of sorts in which part of the story is abridged as you take on a lower overall challenge.


Once the action begins, you’ll control your character with the left analog stick or the D-Pad, firing your weapon with the B button. If you press and hold down the button, you can use the rapid fire feature for an easier time. The A button can be pressed to execute a somersault when the blue gauge is blinking. This somersault will allow you to avoid obstacles, enemies, and attacks while being completely invulnerable. If you’re playing as Hugh, you can rotate Figaro with the L and R buttons once he joins you at stage 2. 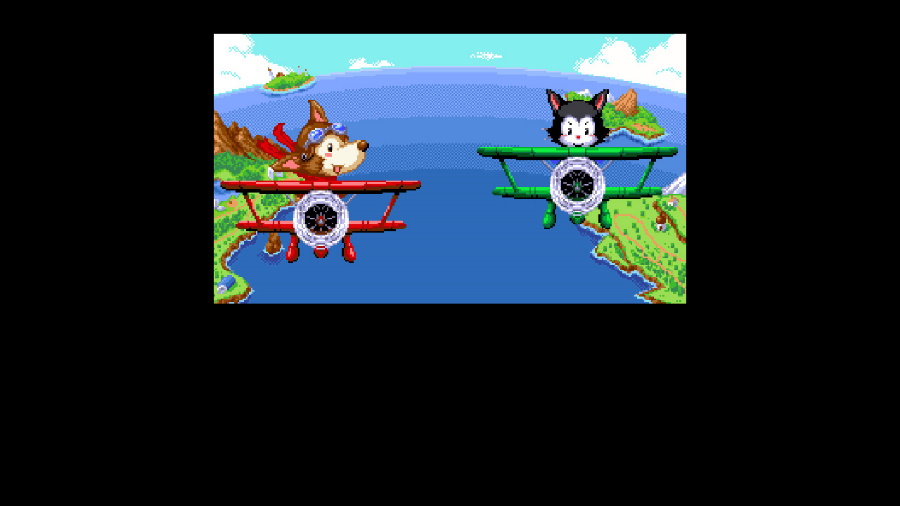 As you take on each stage, you’ll need to keep an eye on your character’s health bar so that you can avoid any deadly damage as you try to recover. Doing a somersault will help you recover a bit so that you can avoid being taken down by an attack. If you’re shot down, and the yellow health gauge is full, then you should press all buttons and wiggle around the left analog stick or quickly press every direction on the D-Pad. If you do this fast enough – and are far away from the bottom of the screen – you’ll be able to survive.


By collecting upgrade emblems – which are sometimes dropped by Professor Howard – you can become stronger. You should also collect as many cube fragments as possible so that you can use them as currency at Professor Howard’s Lab, an airship that pops up at the top of the screen. Once at the Lab, you can use all of the cube fragments you’ve picked up to buy a sub-weapon, change missile type, change bomb type, buy extra lives, slightly decrease or increase your speed, or buy a shield that will block an attack. 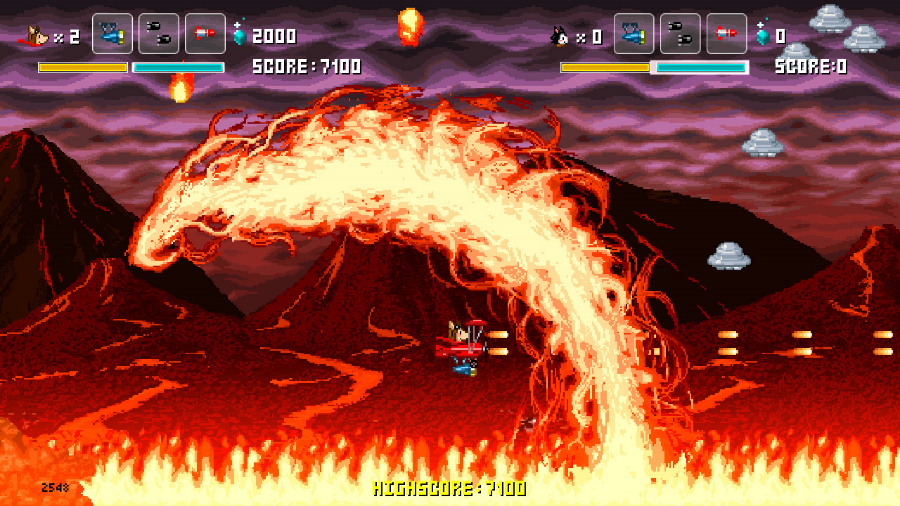 On top of the main shoot ’em up section, where you’ll take on eight stages and fight against 13 bosses, there’s also the Eterday Mode. Once you get started, you’ll meet with Coo, Professor Howard’s assistant. She’ll welcome you to Eterday, the city of hope, Hugh’s hometown. It was badly damaged during the war by air raids, and now it’s time to use the many cube fragments you collect during your time with the main part of the game to rebuild it to bring it back to its former glory. Control a hand cursor and move it around the screen to select the repairs that need to be taken care of and inspect what you’ve already worked on, and see how many of the city’s former residents have returned. You can spend 2000 cube fragments to pave roads, improve the reconstruction level, and bring back new locations such as Angela’s shop. You can pay the shop a visit and purchase some items that can help you in the main portion of Horgihugh And Friends!


There are several items to purchase at Angela’s Newmarner, so you’ll need to collect additional cube fragments to be able to purchase them, which, if you’re the type of gamer who likes to 100% games, will increase the replay value if you’re You can spend 20,000 cube fragments to purchase Dr. Howard’s Bag so that Professor Howard throws two power-up emblems instead of one, an Emblem Replica Pin Badge that will allow your character to start out at level 3 of power, a Travel Bag Summer Edition that increases how many cube fragments you obtain, or a pair of Aviator Sunglasses, which automatically performs a summersault when the gauge is full, and you collide with an enemy. What else can you unlock as you rebuild Eterday? You’ll have to play the game to find out!

You can tailor your experience with Horgihugh and Friends by visiting the options menu. From there, you can change the volume for SFX, activate or deactivate the background music, or change the difficulty between Easy, Normal, Hard, and Very Hard. You can also change how many lives you will have, between 1, 3, 5, or 7. You can also change which button is used for attacking and which one for doing a somersault. 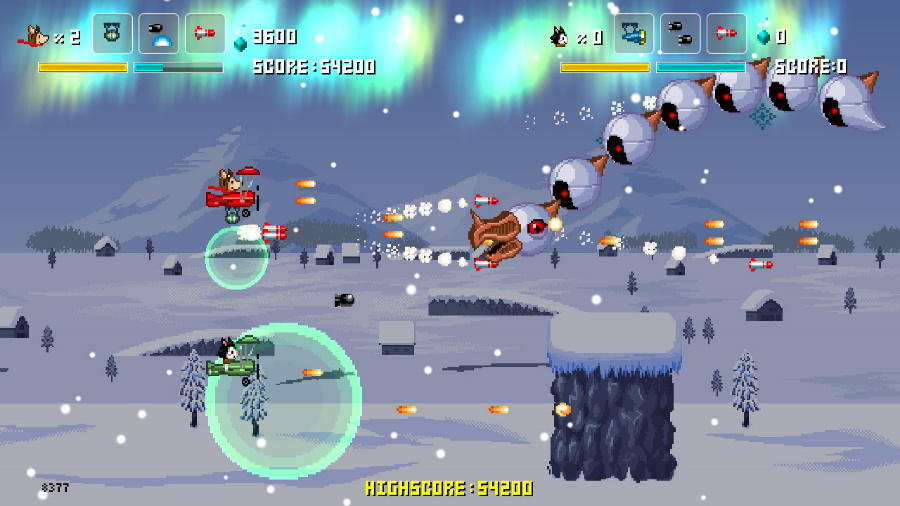 Horgihugh And Friends is a fun retro-styled shoot ’em up that pays homage to the classics from the 16-bit era as you take on the evil Gozareans invaders to save an alternate version of Earth. On top of the main shoot ’em up mode, it also offers the Eterday Mode, where you can help to rebuild the city of hope so that those that were displaced because of the air raids over Eterday during the great war can finally return home. The one complaint I have about the game is how the bosses don’t blink or change color when you’re dealing damage or when it’s close to being defeated. Instead, you’ll have to pay attention to the special SFX for it. Horgihugh And Friends is out on Nintendo Switch with a $29.99 asking price. 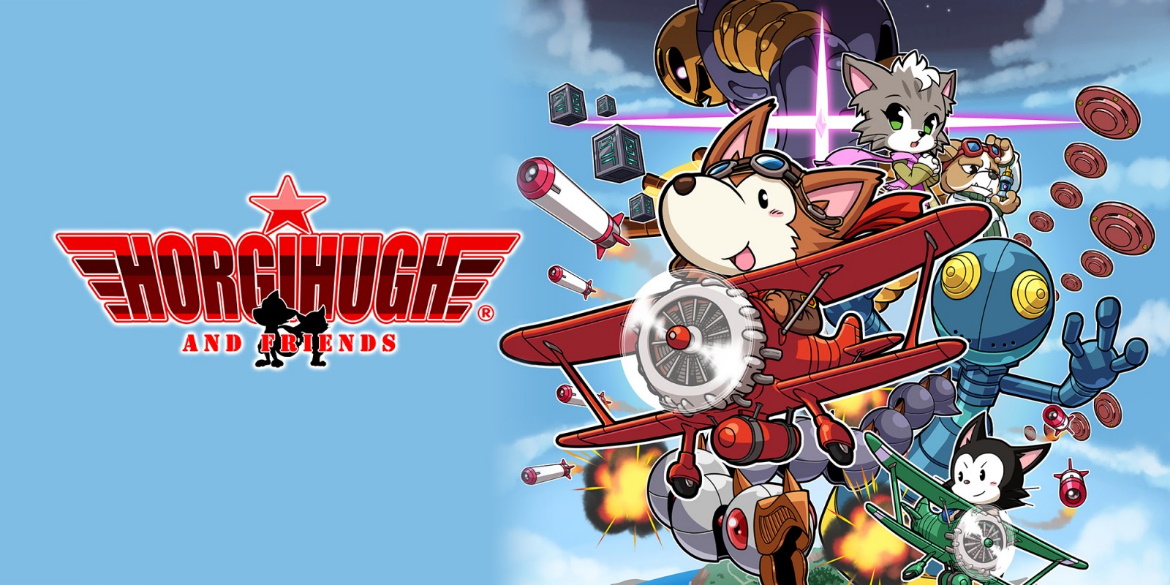 Disclaimer
This Horgihugh And Friends review is based on a Nintendo Switch copy provided by Aksys Games.hor