Circus Electrique, named for the greatest show in an alternate reality Victorian London, is a story-driven tactical RPG/circus management experience with a steampunk twist. Learn more in our Circus Electrique review!


Circus Electrique, named for the greatest show in an alternate reality Victorian London, is a story-driven tactical RPG/circus management experience with a steampunk twist. This one comes from Zen Studios, who you all know from their excellent pinball as well as from games such as the charming and fun Castle Storm Definitive Edition and the excellent dungeon crawler Operancia: The Stolen Sun, and Saber Interactive, who’s given us games a diverse range of games, such as the fast-paced futuristic racer Redout II, and Crysis Remastered – which, yes, certainly runs on the Nintendo Switch.

Something very peculiar is going on in London since regular people have suddenly turned into vicious killers! The only ones who can put a stop to this are the talented performers of Circus Electrique, who are ready to give it their all in order to save the city before it’s too late. This event is now known as the Maddening, and with a huge part of the population turning extremely violent, you can imagine why the Maddening not having any effect on the members of Circus Electrique is a big deal.

The game can be controlled either with the Nintendo Switch Joy-Con, the Nintendo Switch Pro Controller, or by using the console’s touchscreen when playing in Portable or Tabletop Mode, or if playing Circus Electrique on a Nintendo Switch Lite. This one is billed as a story-driven tactical RPG/circus management experience, which is why the game is split into two parts. While the tactical RPG battles will be taking a big chunk of your time, you’ll also have to work on a variety of circus activities as you prepare your performers for their shows!

Once in battle, you’ll need to be aware of the position of each of your characters, as well as of your opponents. Some skills can only be used when a character is in a specific position, and they also have a range to consider for their area of effect. You can manually move teammates frontward or backward as needed. Each of your characters can only use one skill per turn, so be sure to make every choice count! All characters will have one class kill with a continuous passive effect, and some will have an additional random passive skill on top of the one originally assigned to them based on their class. 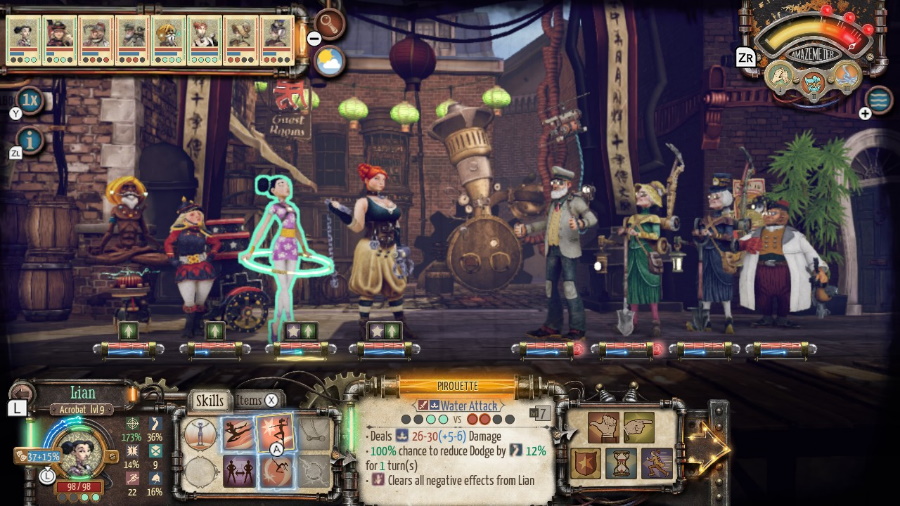 Each of your characters will have Devotion, which acts as their effectiveness during battle, as well as their energy for circus performances. While in battle, characters and enemies with a high Devotion will be more effective, which is why it’s important that you work on lowering the Devotion of your opponents. While Devotion will affect some skills’ damage and hit percentage, that’s not the case for all skills. Those that are affected by Devotion will have an electric effect around their respective icon. You’ll be able to review the positive (or negative!) effect of Devotion for those skills in the parentheses in each skill’s description.


Devotion in battle is so important that it can help your team to chase away opponents… or make your characters flee from battle! If a character’s Devotion reaches zero, it must withdraw. If one of your characters chases away an opponent, it will receive a bonus to their Devotion at the end of the battle. Once a single enemy remains, it might flee if its Devotion is very low. If, on the other hand, that final enemy’s Devotion is high, it will rage, which will boost its attacks, making it a very dangerous adversary!

While attacking and using skills is how you win battles, you must also remember that sometimes it’s best to take a different approach to combat. Guarding will skip a character’s turn, but it will provide it with some extra protection against incoming attacks. If you decide to use the wait command, you can send your character to the end of the team’s turn so that it can then decide what its next action will be. Sometimes you might be ill-prepared for a battle, or things might not go your way. It’s then that you must decide to use the flee command to try and escape from battle in the next turn.

You’ll also have some consumable items at your disposal for your team members to use as needed during their turn. Some can be used to help your characters – targeting one or more of them – while other items can be used to attack enemies or to inflict a status effect on them. Consumable items are especially important during battles that take place under special conditions, which you can check based on the small icon on display. Fighting under the rain or in the darkness of night is certainly not the same thing! 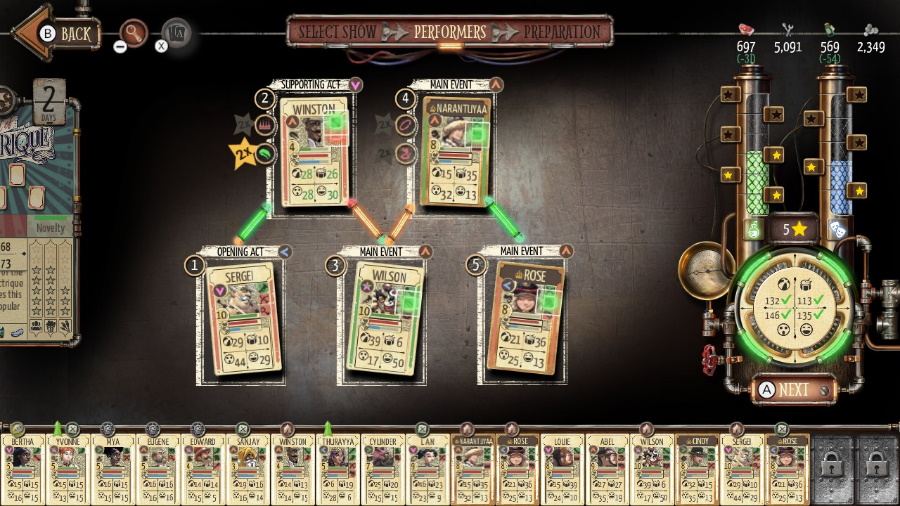 Just as important as combat is the circus management side of the equation. You’ll need to work on increasing your circus’ fame so that you can gain access to more buildings and more upgrades – and since you can’t upgrade something higher than your current circus level, boosting it is very important! You can upgrade a circus building to give you the option of hiring higher-level characters, which will allow you to stay on top of things as your opponents also grow stronger and stronger.


As you obtain resources and components during your journey, you’ll be able to take them to the Artisan to craft items that can be used during battle, circus performances, or as you explore each of the city’s districts. By visiting the Workshop, you’ll be able to invent, develop, and equip Superskills. You have up to three slots for equipping Superskills to use in battle, and their effectiveness may vary depending on which slot you assign to them. By upgrading the Workshop, you can increase the effectiveness of unlocked Superskills. You can also visit the Sleeping Cart to decide which performers need to rest to replenish their health. 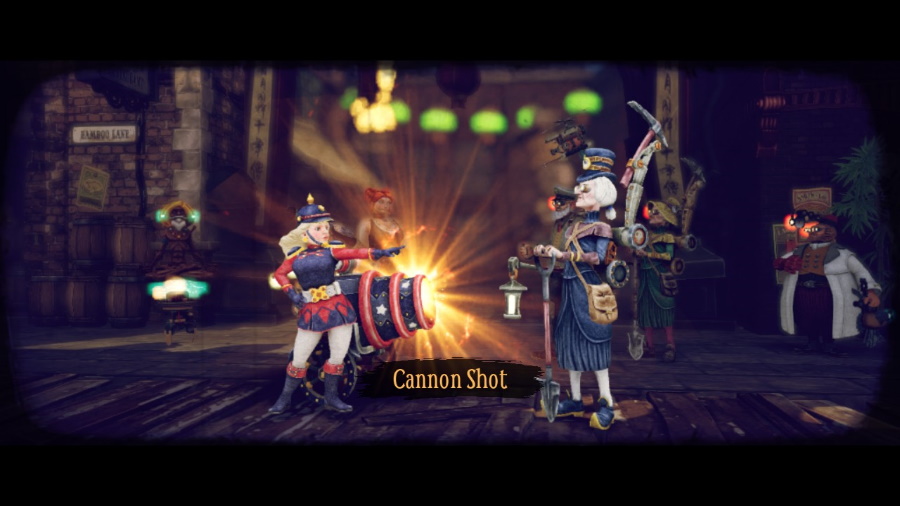 You might want to pay the Oracle a visit while at the circus. The Oracle can help the exploration team – a.k.a. the group you send out into the city – as they take on those affected by the Maddening. You can also assign some of your characters to help the Oral so that enemies and reward types are revealed, to increase precision in combat, or to provide a boost to the team’s Devotion after the battle. Just remember that any characters that you assign to assist the Oracle won’t be able to participate in other activities! Visiting the Practice Tent is also a must since it’s where you’ll be able to train available performers. By assigning characters to the Practice Tent, they will be able to gain experience, but do be careful since training will lower their Devotion. By improving and upgrading the Practice Tent, you’ll be able to improve their circus act as well.

Speaking of which, let’s talk about the circus show! You’ll first need to prepare by selecting the right draft for the show. After this, you will choose the performers that will participate. The chemistry between the performers will be taken into consideration for the outcome of the show. The number of slots in the draft will determine how many performers can participate. Stars will show the potential in max revenue, audience satisfaction, and performer experience for the potential program. You’ll have to mix things out here and there since the audience does not want to see the same show on different days in a row! You can also use booster tools for your performance based on the corresponding slots.

To be able to launch the show, the performers’ overall Fun, Amazement Thrill, and Laugh values must at least meet the minimum requirements – although you should certainly aim to have a group of performers that exceed said values. You also need to meet the audience’s expectations. As expected, each performer has a preferred performance type, so you need to make the most of what you can take advantage of. A performer will also have a preferred slot for you to consider when placing those that will participate in the show. Select characters with a high Devotion, which will certainly help to have a successful show! 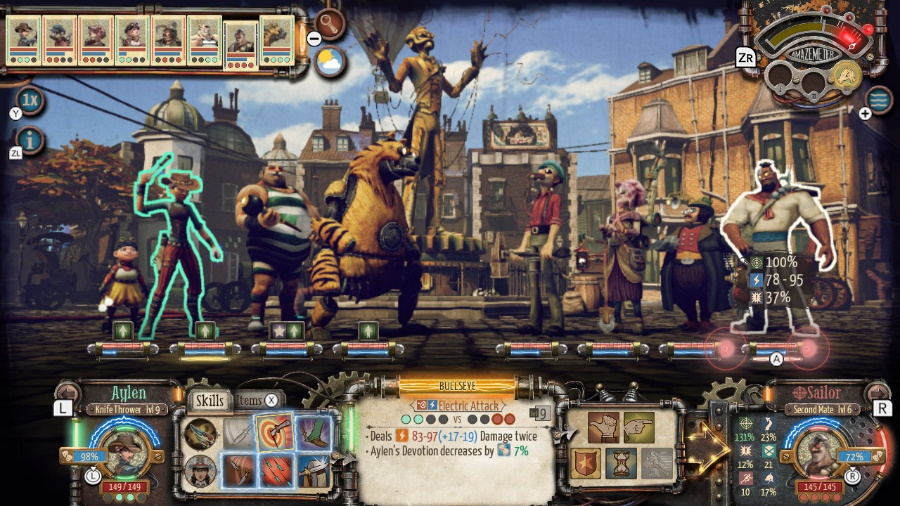 At the end of each day, the events you’ve experienced will be summarized in the newspaper The Illuminated London Voice by showcasing the most important events of the past 24 hours. You can review articles on recent events, what happened at last night’s show, the commercial status of the circus, and some additional elements. While reading each new newspaper issue won’t be mandatory, checking them out will allow you to learn more about the lore of Circus Electrique. Think of those sections as what you’d learn from finding an audio log or diary entry in another game, and you’ll get the general gist of it.


As characters progress through this journey, they will get to level up, which will increase some of their attributes, making them better in future circus shows and battles. For each level up a character gets, it can distribute 10 points to increase its Circus Act values. Performers are an integral part of this adventure and your most valuable resource, so be sure to take care of them! If you don’t value their efforts, and their Devotion value is at 0 for several days, they can end up leaving the circus! Performers can also die in battle, so use consumable items to heal them!

To really drive home the whole alternate reality Victorian London aesthetic for the game, there are some options activated by default that you might want to look into in order to be able to customize your experience. Circus Electrique applies an old record music filter to the music, along with what the team has dubbed a 19th Century Vibe music filter. On top of this, the video for the game receives a filmic post-effect filter. Be sure to check these options to find out if the defaults feel right or if there are some changes you want to make on your end. 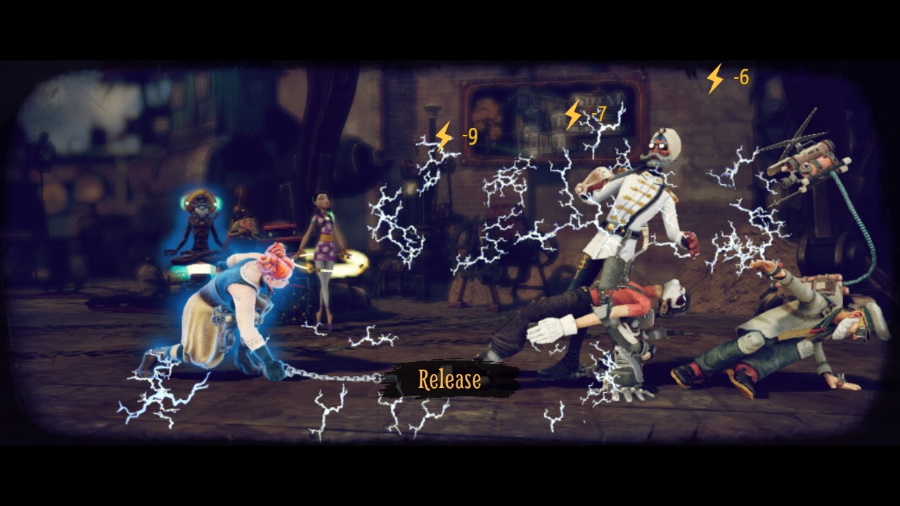 Circus Electrique is an outstanding tactical RPG/circus management sim in an alternate reality Victorian London with a steampunk twist that will keep you busy for a while. You’ll be working hard on putting on the best show possible day after day as you take on the many battles in which you must defeat a variety of foes that have been affected by the Maddening. There are many potential combinations for your party, with clowns, fire blowers, strong men, and other character classes to consider for your group. The game’s art style, general aesthetic, gameplay mechanics, and musical design make for a very compelling package on Nintendo’s console. Circus Electrique is out today on Nintendo Switch with a $19.99 asking price, and it’s one you should add to your collection today! 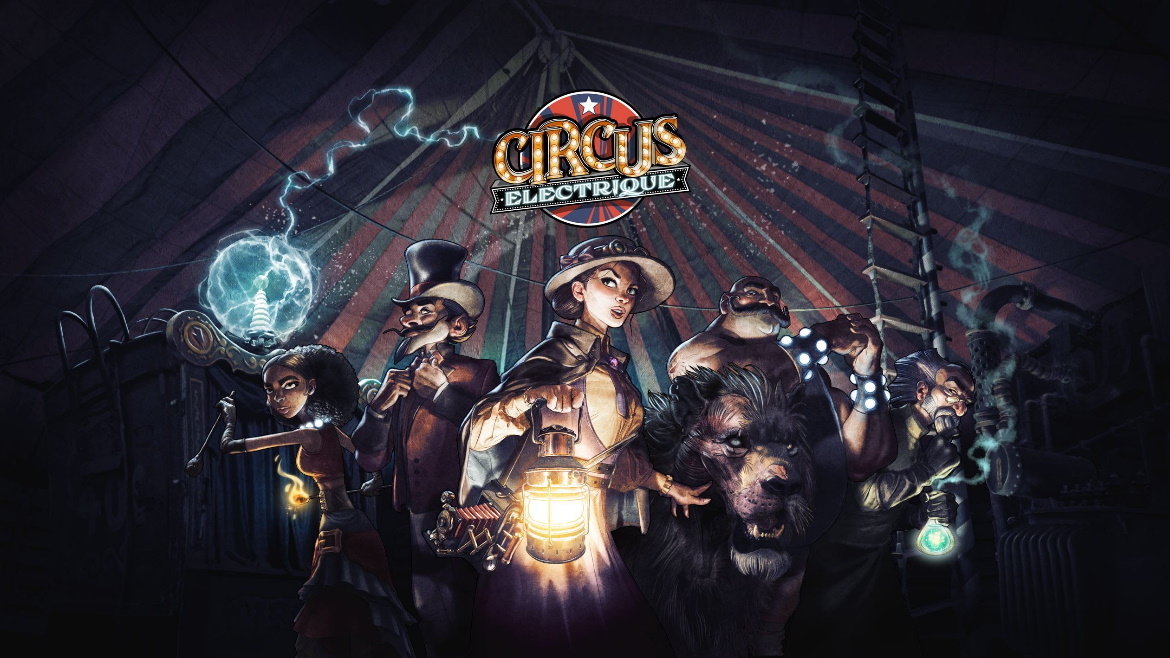 Disclaimer
This Circus Electrique review is based on a Nintendo Switch copy provided by Saber Interactive.