Sequel Blossom Tales II: The Minotaur Prince by Playtonic Friends and Castle Pixel brings us a new story starring the young Lily and Chrys. The story starts as Chrys comes out of the woods, saying Lily broke his sword on purpose. After hearing them complain a little bit, the grandfather reminds them about the importance of having a sibling and mentions that they should be nice to each other. He then goes on to say he has the perfect story for that type of night… the tale of the Minotaur and his young Prince! 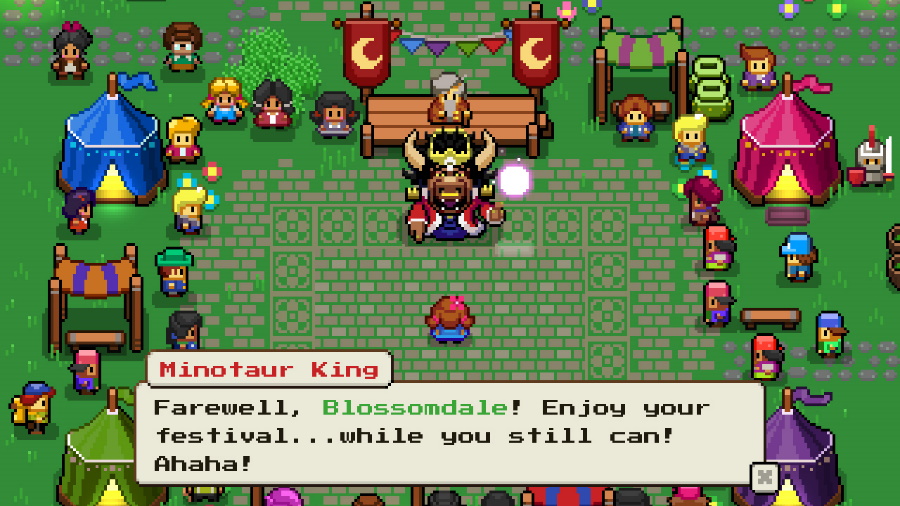 The story starts on the day of the Minotaur Moon Festival in the town of Blossom. Both Chrys and Lily – the two kids in the story that is narrated by the grandfather, who happen to share the names of Chrys and Lily – are headed to the festival and will gather Minotaur coins to participate in the tournament. As Lily, you end up with enough coins to participate and make it to the final round of the battle, which ends up against her brother Chrys. After a somewhat unfair trick, Chrys beats Lily, and she then wishes that her brother was taken away by the Minotaur King. Unfortunately for her, the Minotaur King appears in front of them and kidnaps Chrys. Feeling guilty for having him kidnapped, Lily decides to embark on a quest to rescue her brother. Meanwhile, Chrys slowly gets acquainted with the Minotaur King.


In terms of gameplay, you are presented with a top-down view that should pretty much automatically remind you of classic The Legend of Zelda titles. You move around with the left analog stick or the D-Pad. The X button will be used to perform a dodge roll. The B button will be used for your sword and for interacting with people and objects such as treasure chests. The Y and A buttons will be for other items that you can equip and change depending on your needs. Said items will vary from things like a shield, a lantern, and other special items that you’ll gradually gain access to as you progress through the game’s story. The dodge roll and your equipment items will consume part of your stamina bar, which slowly replenishes over time. The + button will allow you to access your inventory to swap items, consume other items, or review the map, which highlights the next place you should head to. 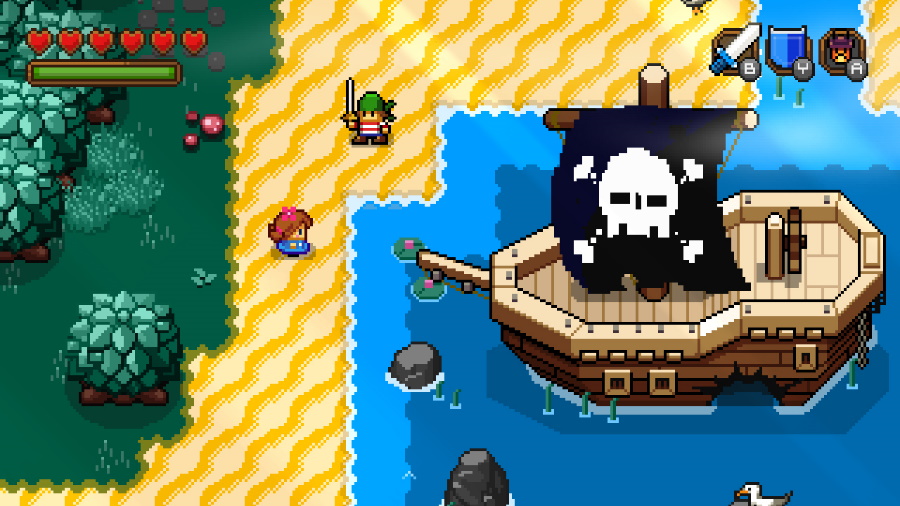 While you’ll always have the main quest to progress as you try to find your brother, there will also be several sidequests that you can decide whether to complete or not for some extra rewards. You’ll discover these early on when you’re asked by someone in town to deliver some packages to people. As you travel the world and eventually some dungeons, you’ll be fighting against different enemies and avoiding traps, sometimes solving puzzles along the way. Dungeons will require you to find keys to be able to make it through some locked doors and will generally have a boss at the end of them.


Visually, the game has everything you could desire from a retro-inspired top-down action RPG from the 16-bit era. But while it has its fair share of similarities to the beloved The Legend of Zelda franchise, I also found that the character designs and styles reminded me a bit of another RPG classic: Earthbound. Altogether, it creates an incredibly good-looking game that’s definitely fun to watch both on the big screen and when playing in Portable or Tabletop Mode, thanks to the hybrid nature of the Nintendo Switch. 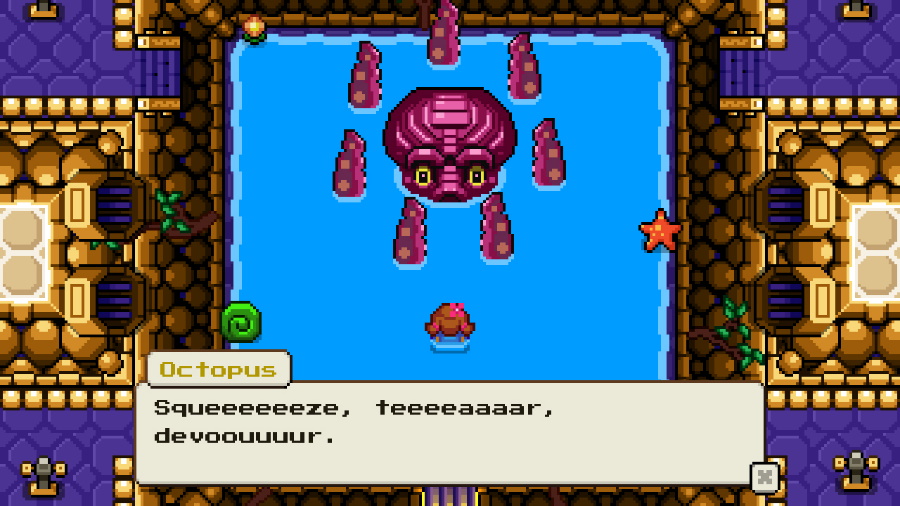 Being a fan of the genre, I was pleased to jump into this one and immediately appreciated the gameplay and the feel of the game. You gain new items at a good pace, so you don’t end up with a ton of new gadgets at the same time without having the time to learn what they do and how they work. I was also surprised to see that there was also some alchemy in that game, although don’t expect anything sophisticated like in the Atelier series. But still, you get to find recipes and can create new items at a cauldron if you have the right ingredients. Ingredients will also be used at some traders so that you can gain additional items, so there’s definitely an interest in grabbing everything you can find.


I also really appreciated the light story the game offers. It is a simple, refreshing adventure, and it was just fun to tag along as you follow Lily on her quest, with some occasional scenes showing how Chrys is interacting with the Minotaur King. There are also the occasional interruptions by the “real” Lily and Chrys, sometimes disapproving of how the story is narrated, and you can even sometimes change how the story will play out, for example, by changing the type of monster that appears in front of Lily. 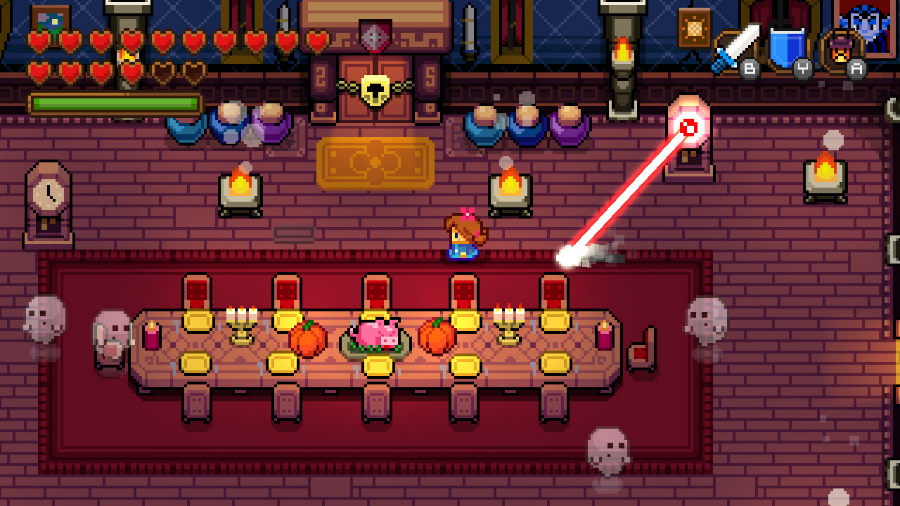 It goes without saying, Blossom Tales II: The Minotaur Prince is heavily inspired by The Legend of Zelda, a series that pretty much defined the genre. But in the end, it’s able to define itself as its own game and provides a lot of fun with its story and gameplay, and it’s definitely a game that’s worth playing on Nintendo Switch. Blossom Tales II: The Minotaur Prince is out with a $14.99 asking price. 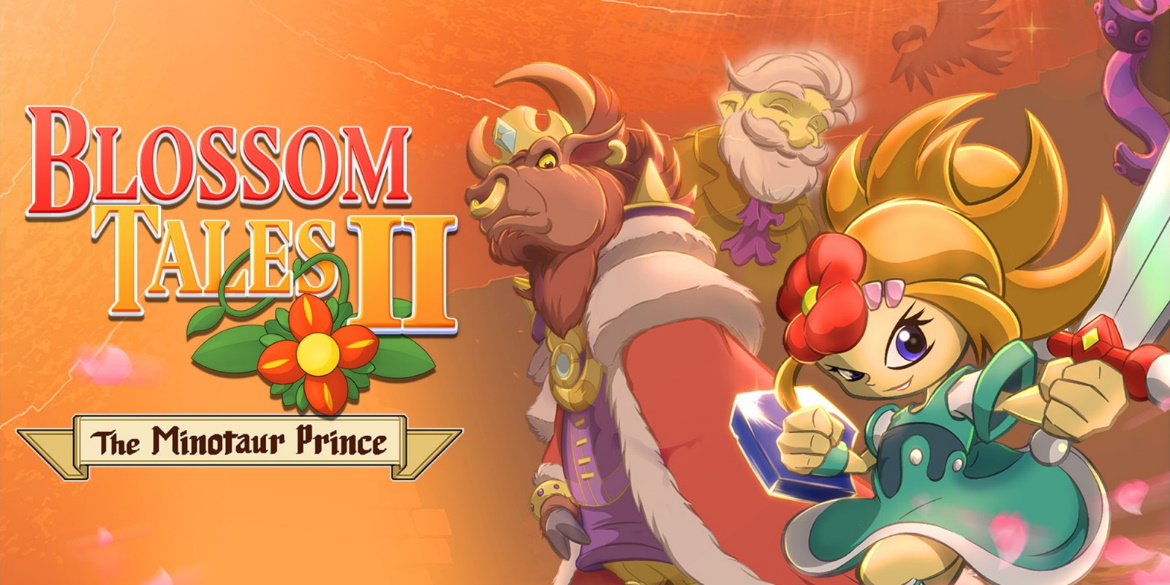 Disclaimer
This Blossom Tales II: The Minotaur Prince review is based on a Nintendo Switch copy provided by Playtonic Friends.