MY HERO ULTRA RUMBLE is a free-to-play 24-player battle royale game on its way to PS4, and we got a chance to play it out during the closed beta. Come learn more about it!


MY HERO ULTRA RUMBLE is a free-to-play 24-player battle royale game on its way to PS4, and we got a chance to play it out during the closed beta. This new game from Bandai Namco Entertainment America based on the My Hero Academia universe will launch later this year. The game will have you be part of a team of 3 players as you battle it out against another seven teams as you aim to be the last team standing. You’ll be able to select between strike, assault, rapid, technical, or support characters, making the most of each character’s Quirks – special skills that can help to turn the tide of battle. 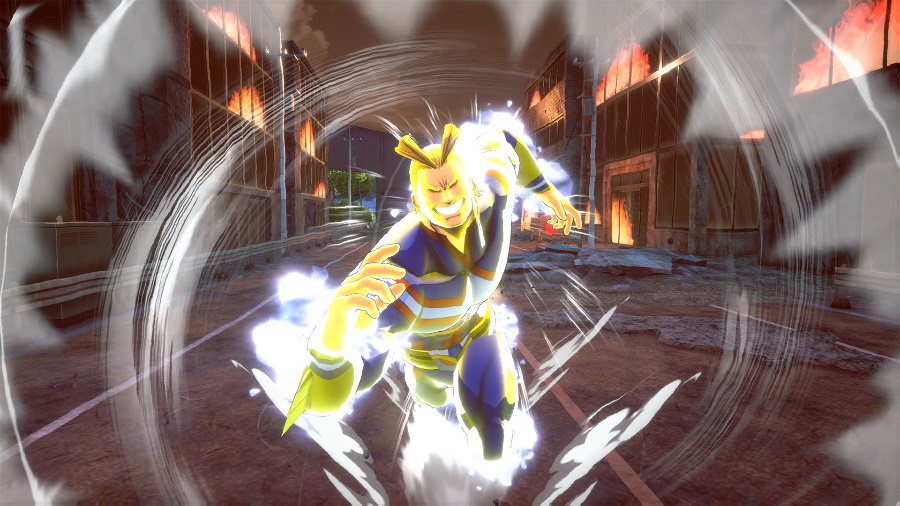 Once I logged into the Closed Beta, I was greeted by a short intro tutorial to teach me all of the basics. You’ll control your character with the left analog stick, dashing by pressing in on the stick. You’ll jump with the X button and dodge by pressing the X button twice in quick succession. If you jump towards a wall and make contact, you’ll start wall climbing. You can crouch by pressing the R3 button, which will allow you to hide from opponents if you place your character at the right spot.


Punches are mapped to the Square button, with special actions set to the Triangle button. For instance, Midoriya can carry and move downed teammates by pressing the Triangle button near them. You can map Quirks to the L1, R1, and R2 buttons. Quirks will have limited uses, but don’t worry too much about it since uses will regenerate at different speeds over time. Pressing the L2 button will make your character go into aim mode. The D-Pad can be used for items by pressing up and for placing a marker by pressing down. Pressing left or right will activate the alpha and beta abilities for your character, depending on what you’ve slotted into your two ability spots. 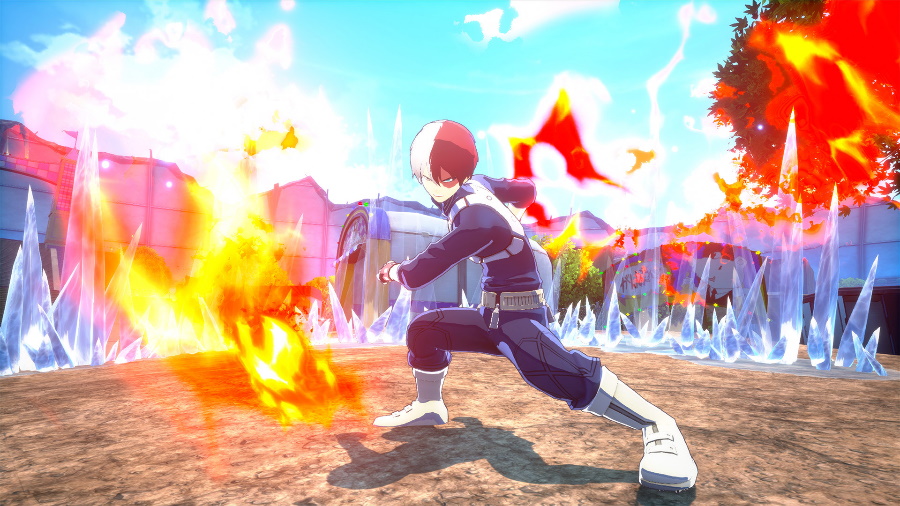 Each character has Quirk Skill Cards that can be collected to boost their different Quirk skills. With each Quirk Skill Card that you collect, said Quirk will be increased by one level. You can check your character’s Quirk color by taking a look at the background surrounding your character in the bottom-left corner of the screen. By boosting a Quirk’s level, you can increase the number of uses for it or increase the impact said skill would have upon landing. You can also find special cards that allow you to select which Quirk you want to level up.


As you fight against other teams, your Guard Points (GP) will lower. GP act as a buffer that protects you from attacks that would otherwise start to drain your hit points. Having some GP when receiving an attack will allow you to dish out some damage instead of recoiling back from a heavy attack that actually hurts your character. Do know that some special attacks can go past your GP and directly deal HP damage. If you don’t have enough GP, you can look for the special blue potions that you can then drink to replenish some of it. 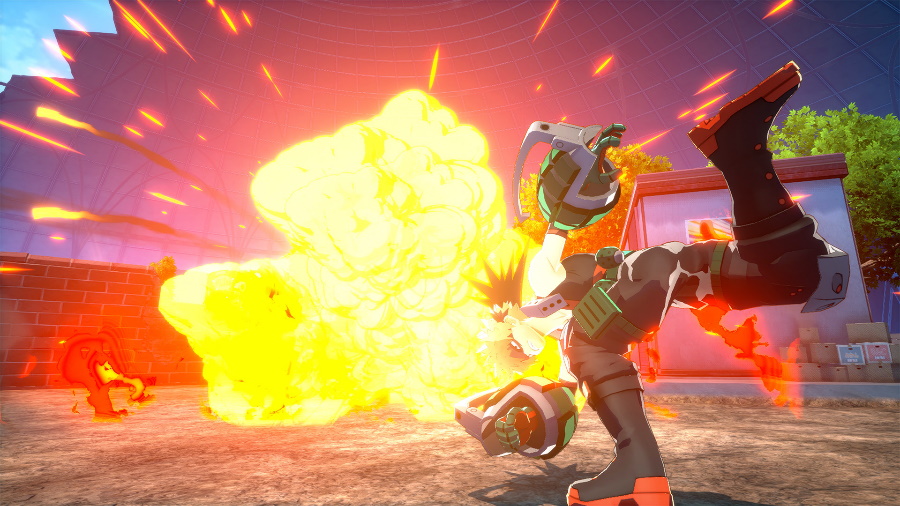 Along with fighting against the other seven teams, you’ll also have the option of helping the civilians around the area that didn’t manage to escape before the battle began… or not! Heroes will be able to rescue civilians, while villains will be able to intimidate them. You know, as villains do. To evacuate a civilian, move near them and then initiate the rescue. Rescuing a civilian will take some time, and that means you could leave yourself wide open to an attack, so be careful!


Your character will have a hit point gauge that will determine how much damage it can take before being defeated. Once that gauge reaches zero, your character will go down and will remain injured. While in this state, your HP bar will turn red, and you’ll only be able to crawl. If one of your teammates helps you, or if you manage to hide and survive for a set period of time, you’ll be able to recover. If, on the other hand, you receive additional damage that completely drains your red HP bar, you’ll be KOed and will leave the battlefield. 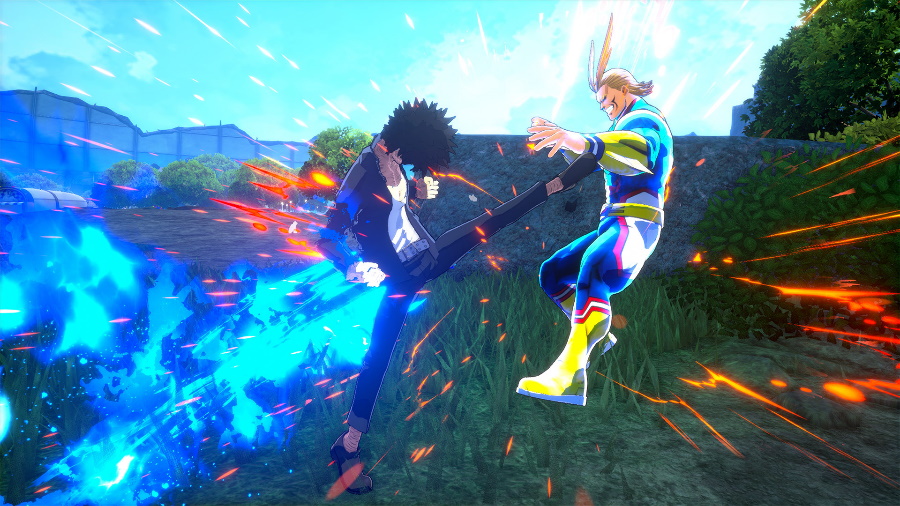 You’ll be able to take on different missions during your time with MY HERO ULTRA RUMBLE. Missions will reward you with useful items as you complete the different objectives that they present to you. Just be sure to claim your rewards once you’ve completed a mission! The tickets that you collect can be used in the Roll section to roll for a random reward that could be a new costume, new voices, or new emotes for your characters. Roll items are random, so you’ll need to take into consideration their drop rates. Any duplicates that you can – and yeah, you will probably get a lot of them – will be turned into bonus Hero Souls, which you can then spend at the shop. Hero Souls can be spent to gain gold coins, roll ticket fragments, full roll tickets, and even bundles of roll tickets. And yes, you can certainly trade enough roll ticket fragments in exchange for a proper full roll ticket.


MY HERO ULTRA RUMBLE will launch later this year, and after taking the MY HERO ULTRA RUMBLE Closed Beta for a spin, I look forward to checking out the full Free to Play release from Bandai Namco Entertainment America on PlayStation 4 and seeing where they take this one with all the My Hero Academia lore and characters they can draw from for future updates and events.

Disclaimer
This MY HERO ULTRA RUMBLE Closed Beta Preview is based on a PlayStation 4 copy provided by Bandai Namco Entertainment America.