Long Live the Queen from Ratalaika Games and Hanako Games is a raising sim in which you try to help a 14-year-old Princess become Queen. All you have to do is make sure she gets to her coronation ceremony. It shouldn’t be much of an issue, right? Unfortunately, things are in turmoil. She’s going to become Queen because her mother has met an untimely end. Nobles are scheming in a play to grab power, and your Kingdom’s neighbors will use any perceived weakness to expand their borders and take what they think they deserve.

Indie Hanako previously gave us A Little Lily Princess, in which you had to help Sara, who had been raised like a princess, to overcome the obstacles found during her trip away to a boarding school. Long Live the Queen shares some elements with that game. This time around, you’ll work on helping Elodie survive and make it to her coronation to become a young Queen, for better or worse. Once you start to play, the game will ask if it is your first time playing Long Live the Queen and if you want to read a brief introduction on how the game works. 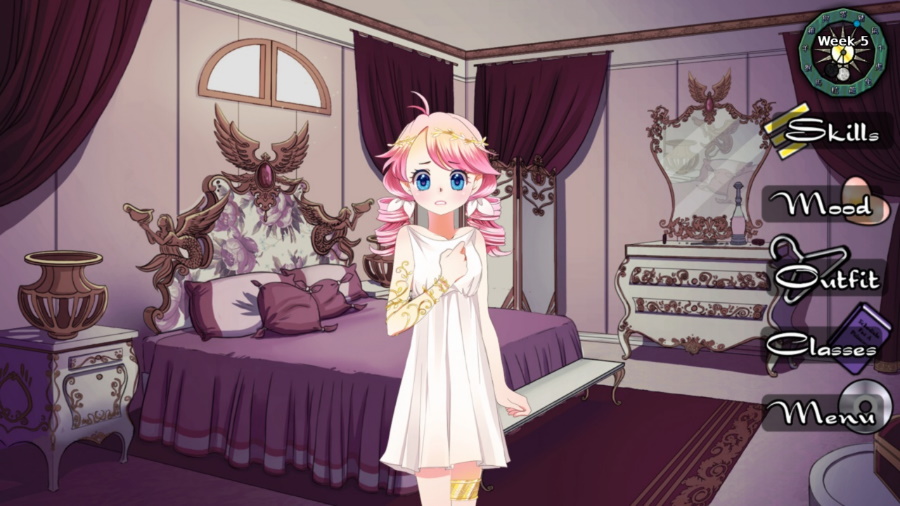 If you do things right, Elodie will become the Queen of Nova, so she has to prepare for her coronation by taking classes every week in order to raise her skills. The skills that she learns will give you different choices to move the plot along, and learning the right skills can make a big difference… and help to keep Elodie alive! Her mood is also important. As you can probably imagine, she’s not in the best mood at the start of the game, what with her mother’s tragic death and all!


Elodie will start afraid and depressed, so you’ll need to work on helping her feel better so that she’s more cheerful. Just be careful so that she doesn’t feel pressured, lonely or angry! She can also end up feeling willful or yielding depending on the choices you make along the way. Elodie’s mood will affect her ability to learn from the lessons she takes. Depending on her mood, she will get bonuses for some skills while receiving penalties for others.

The skills screen can certainly feel like a handful the first time you take a look at it! There are so many things to consider that it can seem a bit overwhelming, but through some trial and error, you’ll certainly be able to get the hang of things. Skills are split into four main categories: social, physical, intellectual, and mystical. Elodie starts at zero for all skills and must work on improving each of the subskills contained within each of the four main skill categories. 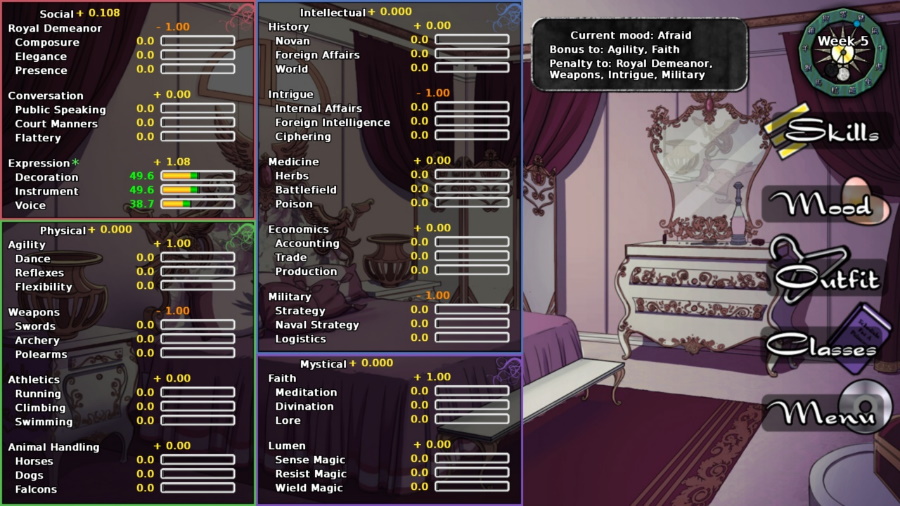 For example, the social category is split into royal demeanor, conversation, and expression. On top of this, royal demeanor is then split into composure, elegance, and presence, conversation includes public speaking, court manners, and flattery, and expression includes decoration, instrument, and voice. You can expect the other three skills to also have different subcategories to work on, and you’ll have to balance things out based on what Elodie studies every week.


She can study two skills per week, earning two points in a skill for every weekday she studies. Take, for example, that Elodie studies history. That means that for all five weekdays, she’ll get a total of ten points, at two points per day. Unfortunately, Elodie begins the game feeling depressed, and having this mood gives her a penalty of -2 for the conversation skill. Since she doesn’t feel like talking to others right now, if you have her study conversation, she won’t make any progress since the two points she would earn each day will be canceled by the -2 points penalty she’s under. But if she has a bonus for one skill, then you can take advantage of that and gain extra points per weekday!

When selecting what to study, you’ll notice that classes are broken down by category and split into morning and evening classes. Once you’ve selected a class for the morning and evening classes, you’ll be able to continue with the week to have Elodie’s studies carried out. Be sure to pay attention to the feedback bubbles that will pop up every now and then so that you can see how your choices are affecting Elodie in order for you to correct course if needed. 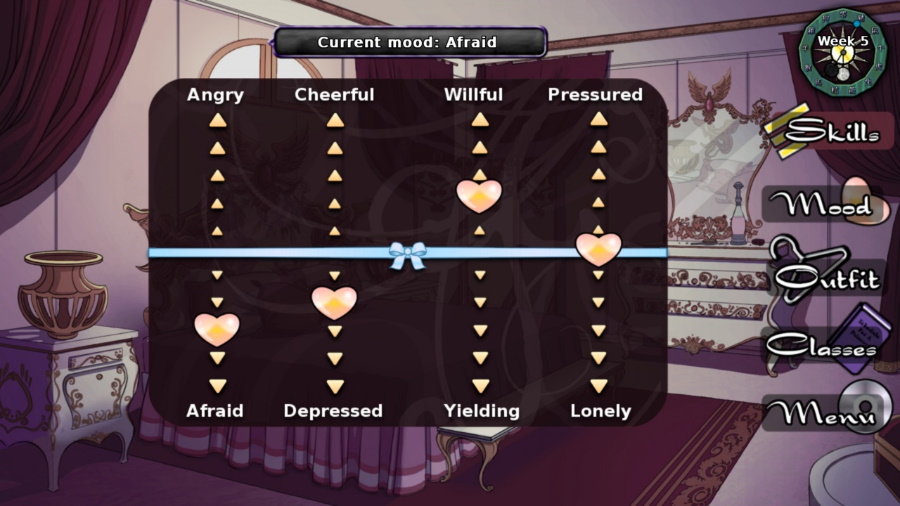 All work and no play is not the way for a 14-year-old to spend her days, even if she is preparing to become Queen. This is why you’ll have to balance things out by selecting some additional activities to take on during weekends. You can select to attend court, talk to your father, walk in the gardens, attend service, play with toys, explore the castle, visit the tomb, visit the dungeons, visit any of your visitors… or perhaps you’d rather sneak out to try and take a step back and escape from everything for a bit? The choices you make will have an impact on Elodie, so choose wisely!


As for the trophies, there’s a lot to do in Long Live the Queen, so this won’t be an easy Platinum trophy to work on. The list includes 2 Silver trophies and 11 Gold trophies and will require that you die at least once – which won’t be hard since there are many people who want to kill you – receive flowers from a woman, order someone to be executed, order an assassination, discover a magical mirror, take possession of a Lumen crystal, embrace the power of magic… or cause an earthquake in Nova. 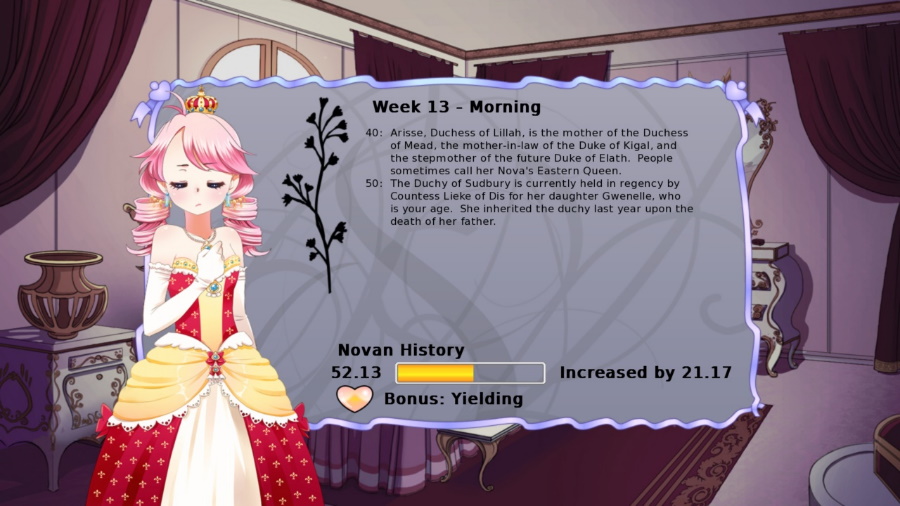 Long Live the Queen is a raising sim that won’t be for everyone due to its gameplay loop and considerable challenge, since making the wrong choice at the wrong time will lead to your character’s death… unless she has improved a particular skill high enough to counter the outcome. At least that means there’s a lot of replay value in this one! Long Live the Queen is out as a Cross-Buy title with a $9.99 asking price, so your purchase will give you both the PlayStation 4 and the PlayStation 5 versions of the game at no extra cost. 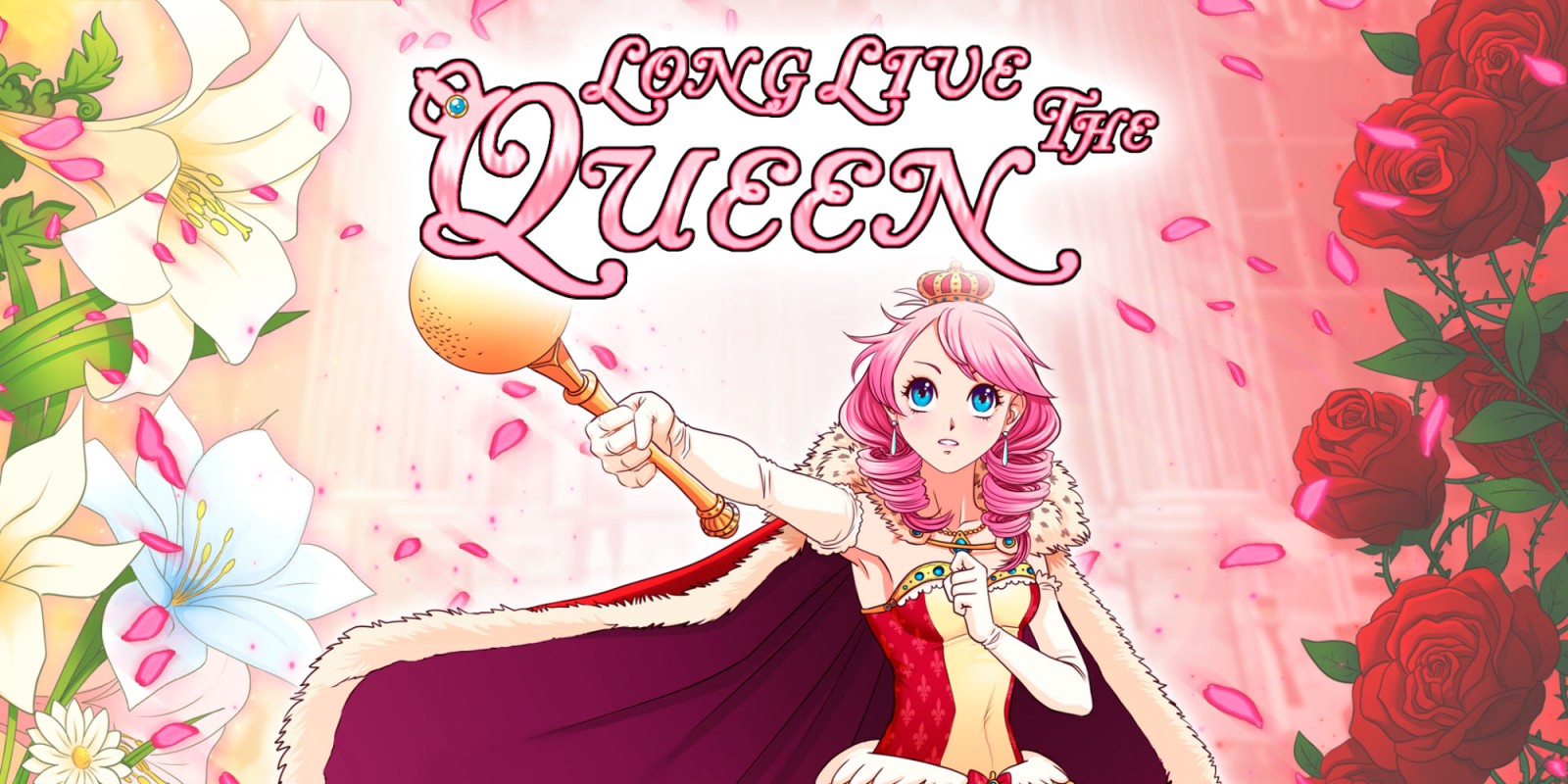 Disclaimer
This Long Live the Queen review is based on a PlayStation 5 copy provided by Ratalaika games.