Frogun from Molegato and Top Hat Studios is a retro-inspired N64-infused 3D platformer on PlayStation. Learn more in our Frogun review!


Frogun from Molegato and Top Hat Studios is a retro-inspired N64-infused 3D platformer on PlayStation. You’ll be playing as Renata, who takes on a journey through mystical ruins in search of her parents who have gone missing! They usually take her on these trips since they’re a family of world-renowned explorers, archeologists, and inventors. After waiting for three whole days for their return, she decides to take the Frogun – a gun in the shape of a frog – to explore the Beelzebub ruins. 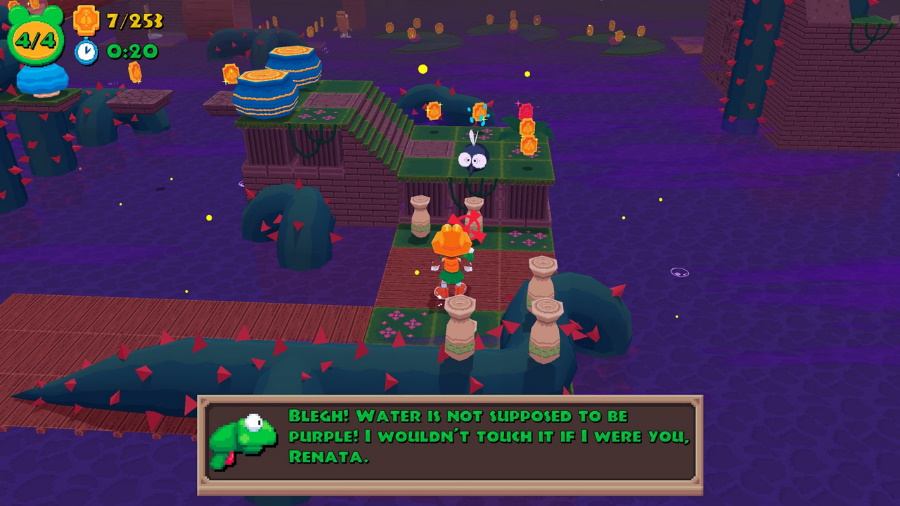 You’ll control Renata with the left analog stick, as you swing around the camera with the right one, changing the camera angle as needed. You can press the X, L1, or R2 buttons to use your Frogun, which will make it stretch out its tongue. This can be used to grab enemies or objects or to draw you towards a surface, which is very useful for the trickier platforming segments in some of the game’s levels. If you need to get a better idea of where the Frogun’s tongue will b shot at, you can press the Triangle or L2 buttons. The Circle button will be for jumping.


Each level in Frogun will have a ton of bottomless pits, moving platforms to help you progress through each stage, platforms that will start to crumble as soon as you step on them, switches that will activate timed blocks, bouncy shrooms that will help you reach new heights, very sharp spikes that pop out of the floor, lava, water that is too deep for you to survive – since, you know, Renata can’t swim – slippery ice platforms, fiery tornadoes, giant rolling boulders, fire-spitting statues, and more!

If you’re the type of gamer who likes to 100% a game, you’ll be happy to learn that each level will have some bonus objectives for you to work on. There will be a large hole for you to enter, which will take you to an alternate area where you’ll need to put your skills to the test to be able to collect an obsidian skull. Each level will also have two large emeralds to collect. There’s also a counter at the top left corner of the screen that will let you know how many coins are in the level and how many you’ve already collected. The last thing to consider is that each level will have a target time for you to aim for. You’ll usually need to play a level at least twice so that you can complete all other objectives and then focus on speedrunning that stage. Oh, and you’ll also have to complete each level without dying! 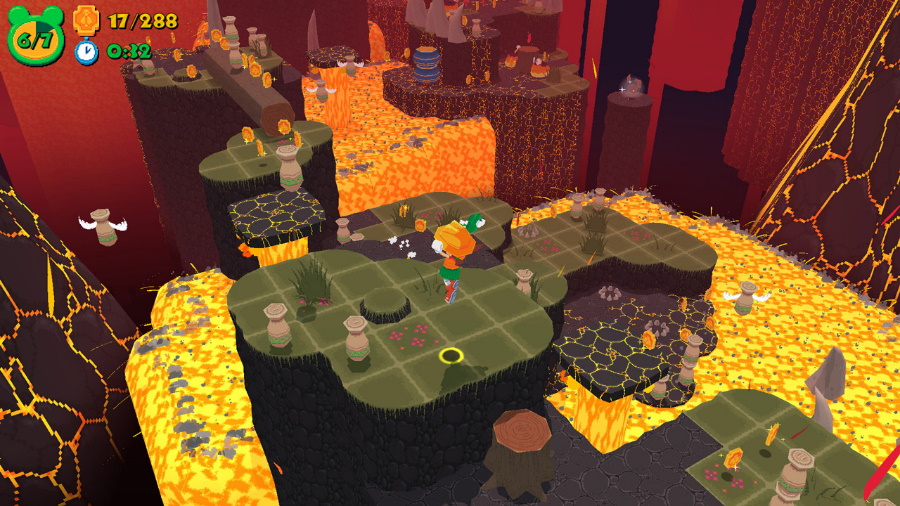 Once you reach the end of the stage and collect the emblem, you’ll notice that it will start to be filled up depending on what objectives you completed. To receive a completed emblem, you’ll have to complete a level and beat the time limit, complete it without dying a single time, collect the obsidian skull, collect both emeralds, find all coins, and collect all notes left behind by your parents. If you miss one of these objectives and replay a stage, you’ll only have to work on those that you missed since the game will automatically save your progress. I suggest you immediately replay a level and take care of the pending objectives to have that level’s layout fresh in your mind.

Collecting the completed emblems is important since it will allow you to open up the treasure chests you’ll find in the level select overworld. These treasure chests contain health power-ups that boost your character’s total health count, making it easier to complete levels and boss fights. Collecting coins is also important since there’s a ton of stuff you can buy with them. Along with purchasing some hats for Renata, you can also unlock a lot of Frogun art. You will also work on completing a Bestiary! 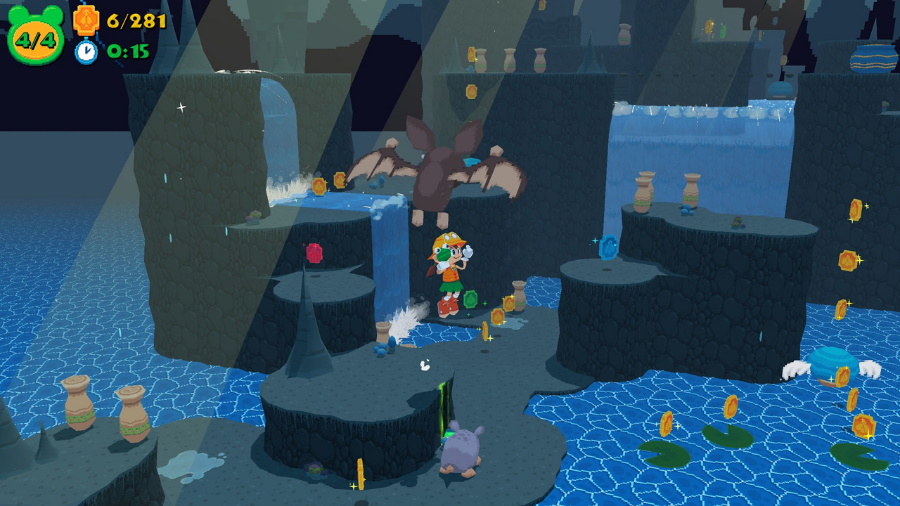 Along with those, you need to get a complete amulet for one level, do this for most of the levels in the game since you’ll have to trade them to open all treasure chests that will give you the power-ups needed to make Renata’s health. You’ll also have to defeat every boss in the game, buy all gallery images, buy all hats – which will require you to grind for a ton of coins – and complete the Bestiary. This won’t be an easy Platinum run to work on, but it’s certainly not an impossible one.

Since this is a retro-inspired release, it’s only fitting that we get a variety of filters to apply to how the game looks. Along with the default setting, there are also filters named Retro, TV (for that cathode-ray tube – a.k.a. CTR – look we all remember fondly), Arcade (which gives the screen rounder look and feel), and last but not least, LED (for an early LED TV generation presentation). You can also customize autoaim, invert the Y axis, change camera sensitivity in the X and Y axes, select the shadow type for your character, hide the level timer, and activate Speedrun Mode. 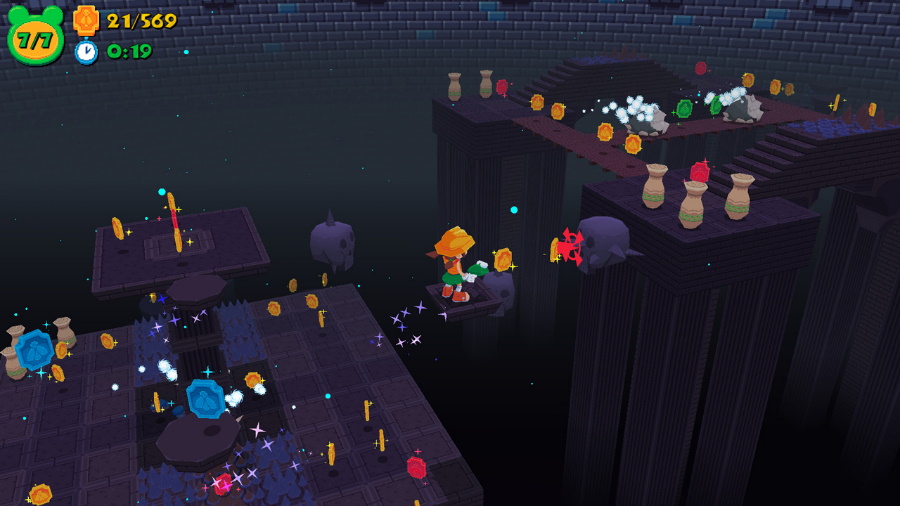 Frogun is a fun old-school-style 3D platformer that will remind you of the Nintendo 64 and PlayStation games from back in the day. Along with the regular platforming levels, you’ll also have to work on special race stages, as well as on clever and challenging boss fights. It’s a Cross-Buy title, so your $14.99 purchase will give you access to both the PlayStation 4 and the PlayStation 5 versions of the game. There’s also a Frogun Deluxe Edition that includes a 50-page hi-res digital art book, a 12-page retro-styled manual, and a music listening room with 21 songs. 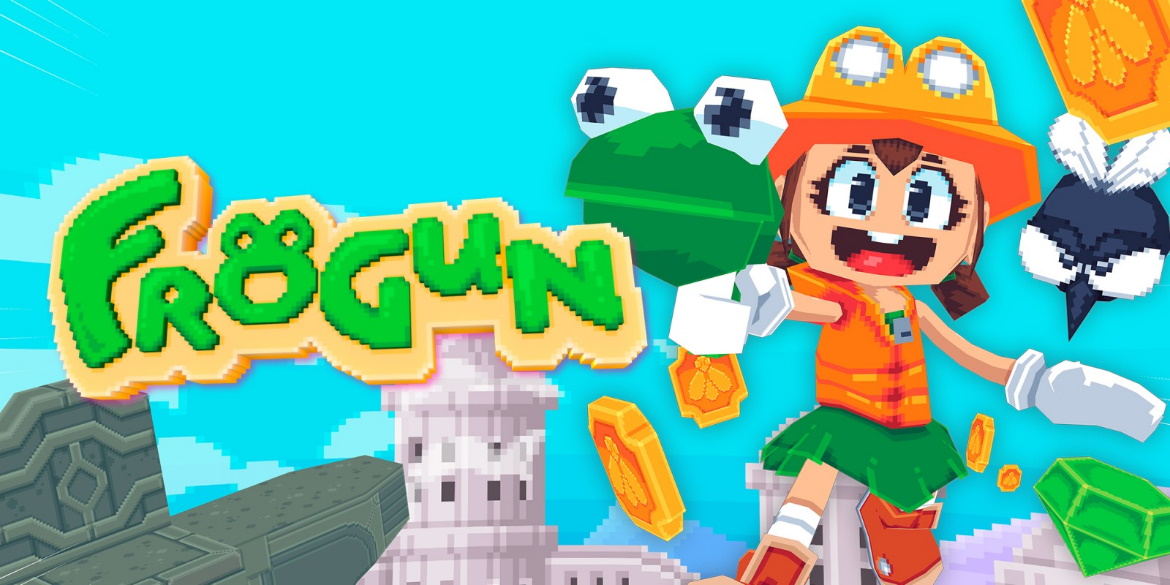 Disclaimer
This Frogun review is based on a PlayStation 5 copy provided by Top Hat Studios.

Made in Abyss: Binary Star Falling into Darkness – Overview Trailer