Shoot ’em up Miss Kobayashi’s Dragon Maid: Burst Forth!! Choro-gon ☆ Breath from Aksys Games is one to check out on PlayStation 4. It’s based on the Miss Kobayashi’s Dragon Maid manga and anime, and it’s fully voiced in Japanese with English subtitles. After receiving a weird email, the titular Miss Kobayashi and the rest of the gang go to Takiya’s house to investigate. It’s there that they’re sucked into Fafnir’s computer! There seems to be a heavy curse in play, and you must explore each stage to find the source of the curse so that you can all escape back into reality! 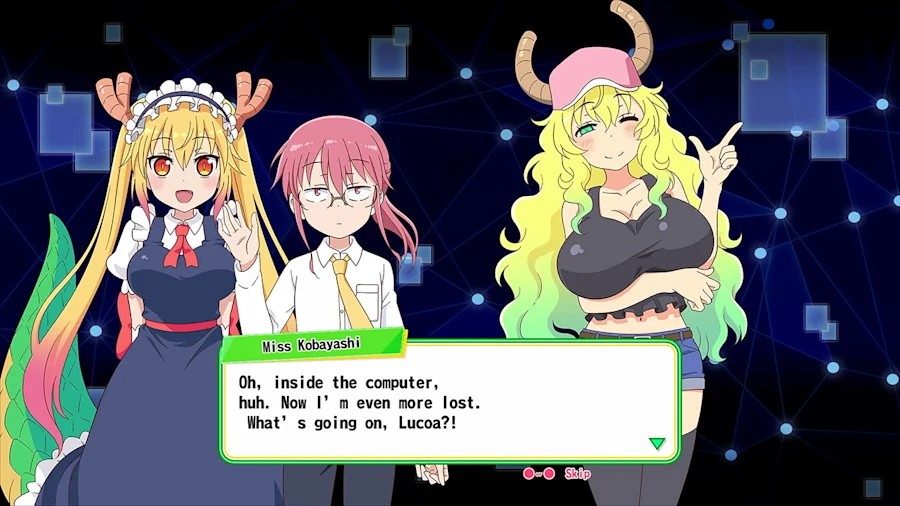 Once you’re set, you’ll control your character with the left analog stick or the D-Pad, shooting with the R1 button. You can use a striking melee blow with the X button and can take a step back to avoid attacks by pressing the L1 button. The Circle button will be for activating the Choro-gon ☆ Breath. There’s a D Gauge at the bottom of the screen that charges over time. Depending on its charge, you can unleash the Choro-gon ☆ Breath to hit all enemies on the screen. The D Gauge can get up to three charges at a time. There’s also the option of remapping the buttons if needed.


To switch between members, you can press the Triangle and Square buttons to change to the left and to the right, respectively. Each character will have different stats for you to consider. Tohru will have a lot of hit points and strong attacks. Kanna will have fewer hit points, but her Choro-gon ☆ Breath will help her recover. Elma has average hit points, but her striking blow deals additional damage. Since each character will have its own HP bar, switching between them will allow them to recover some of their lost HP when resting. 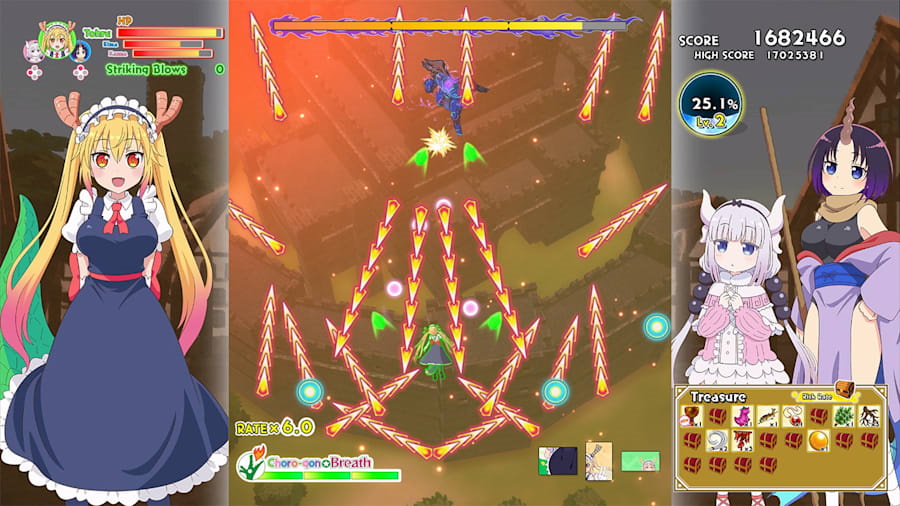 
Defeat many enemies in a row within a certain time, and you’ll start a combo. The higher your overall combo, the more points you’ll receive. Defeating enemies will also charge up the Dragon’s Eye, which can make it possible to send your character into an Empowered State. While in an Empowered State, your character will deal more powerful attacks. Fulfilling some special conditions will send you into a Raging Spark, which will make you super powered up, allowing you to defeat a ton of enemies with great ease. 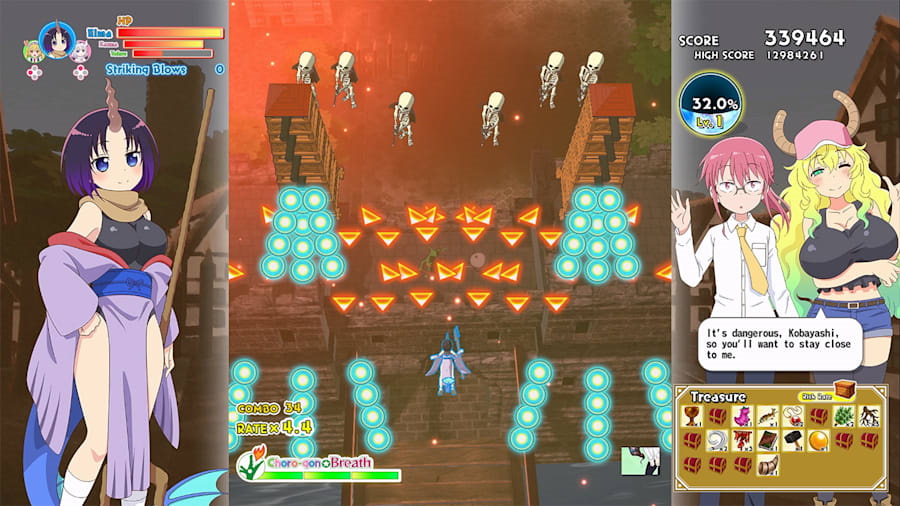 By going into the Collection menu, you’ll be able to review the different special images you’ve completed by collecting the 288 pieces spread around the game’s stages, check the treasures you’ve collected and check your completion rate, view the illustrations you’ve unlocked by playing through the game – with 35 illustrations in total – or read more information about the game’s characters and on the five bosses that you’ll battle. And yes, the game does have some fan service, but it’s of the Rated T for Teen variety.


You can make some changes to the game’s settings to customize your experience. You can change the hit points gauge percentage to increase or decrease the challenge, with the options being 1%, 50%, 100%, 150%, and 200%. You can also change the D Gauge between 3, 4, and 5. Just know that making any changes to the HP gauge or the D Gauge will keep you from posting your high score to the online ranking leaderboards. You can also decide if you want to show all illustrations or not, make the controller vibrate or not, and change the wallpaper on the screen. Since this is a vertical shoot ’em up, the action will take part in the center of the screen so that you can choose between three wallpaper options.

Trophy-wise, this one has a full trophy list with 42 Bronze trophies, 5 Silver trophies, and 3 Gold trophies. What will you have to do to get a new Platinum trophy for your collection? The objectives include clearing a stage with max Risk Rate, reading all character profiles – including those for bosses -, clearing the game in Story Mode without every changing between characters, defeating a boss in Story Mode without taking damage in the Easy or higher difficulty setting, defeating a boss by only using striking blows, defeating 300 enemies with striking blows, collecting all treasure from each district, playing Boss Rush Mode for the first time, being defeated, and getting each one of the endings that the game has to offer. 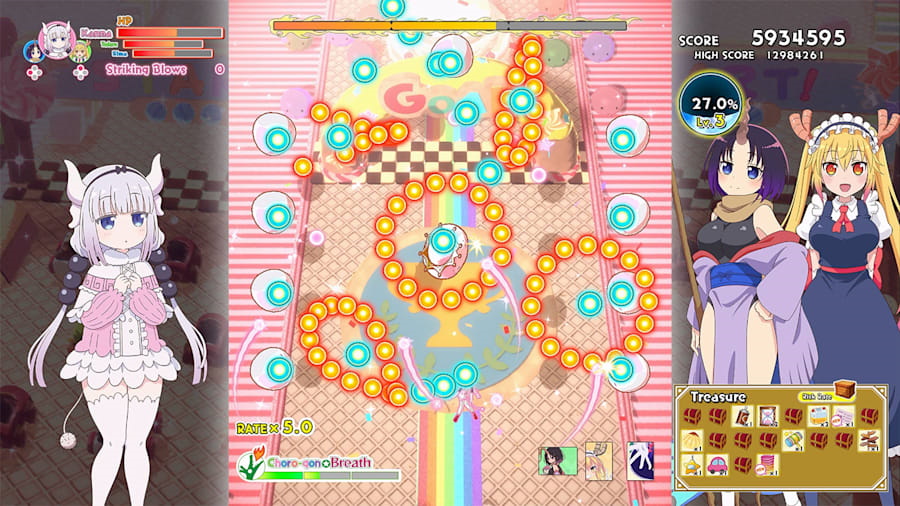 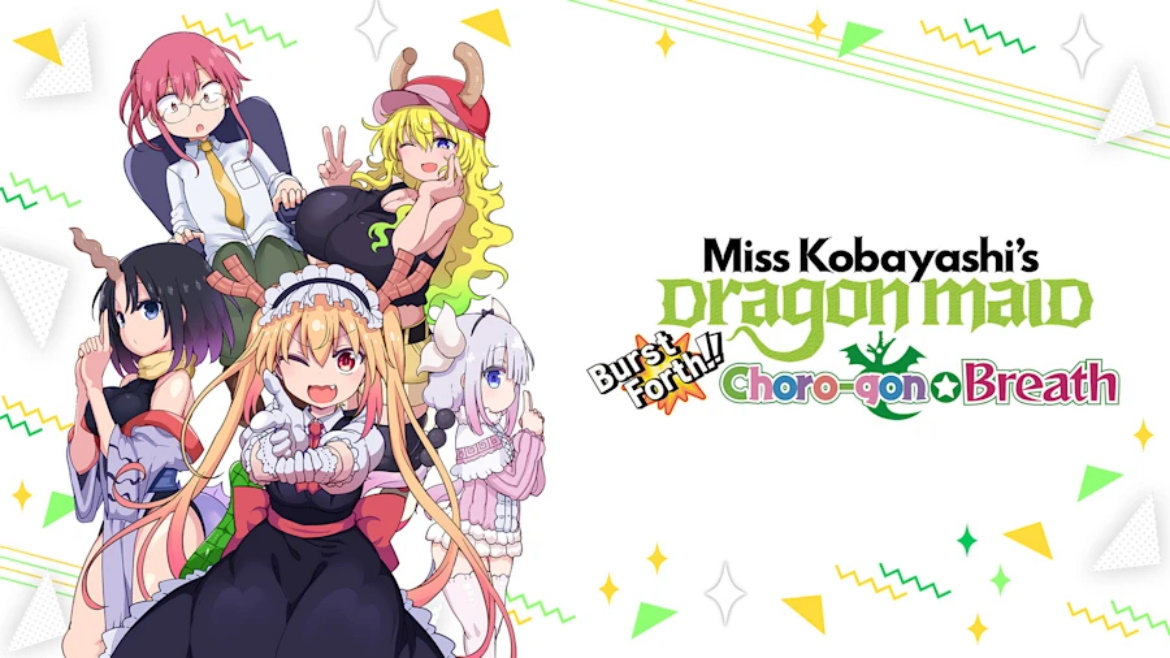 Disclaimer
This Miss Kobayashi’s Dragon Maid: Burst Forth!! Choro-gon ☆ Breath review is based on a PlayStation 4 code provided by Aksys Games.

Foretales Out Next Month Nintendo Switch