Taco Tom 2 from Penguin Pop Games, Ratalaika Games, and Tinzone Games is a visual novel/arcade game on PlayStation. The titular Taco Tom is about to break up with his girlfriend Sally after a disappointing day at the amusement park. Taco Tom ends up single because expected plot twist, so he sets out to live his new life one day at a time. He’ll get to interact with a squid named Sapphire, a penguin named Sidenote, and a robot named Sputnik. What will happen next in the life of Taco Tom? 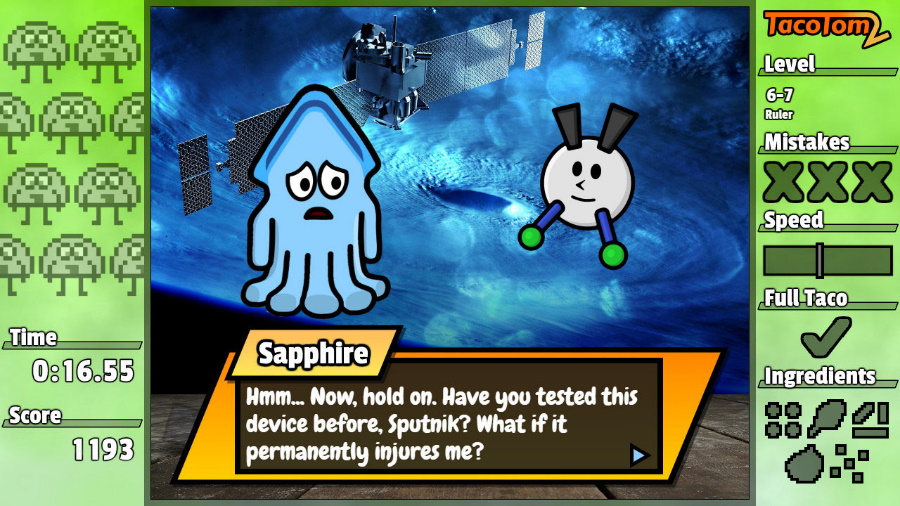 
For the visual novel story segments, you’ll be pressing the X button to read all of the dialogue as you absorb and experience the wonderful royalty-free stock photo background images that complement and expand the storytelling. Taco Tom 2 can be played in one of three difficulty settings based on your skill level: soft-shelled, hard-shelled, or visual novel. Soft-shelled allows you to make infinite mistakes. Hard-shelled is the standard difficulty, and you’re allowed three mistakes per level. 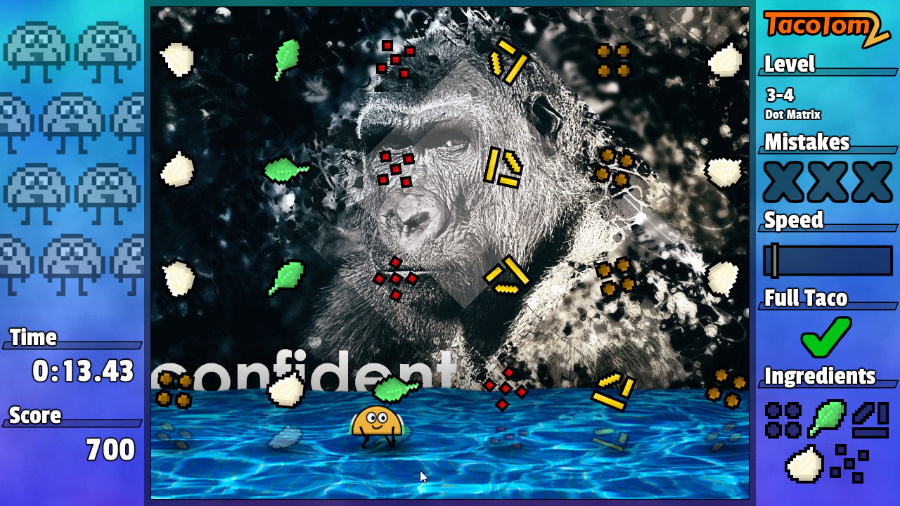 As for the 2D arcade game side of the equation, you’ll move the titular taco-shaped character with the left analog stick or the D-Pad as it rushes left and right, trying to collect the missing ingredients for having a full taco. Taco Tom can dash with the L1, R1, Square, and Circle buttons as needed so that Taco Tom can move through walls to avoid obstacles and collect extra ingredients. You can even time travel by using the L2 and R2 buttons to slow down or speed up time, which is a must for collecting some specific ingredients. 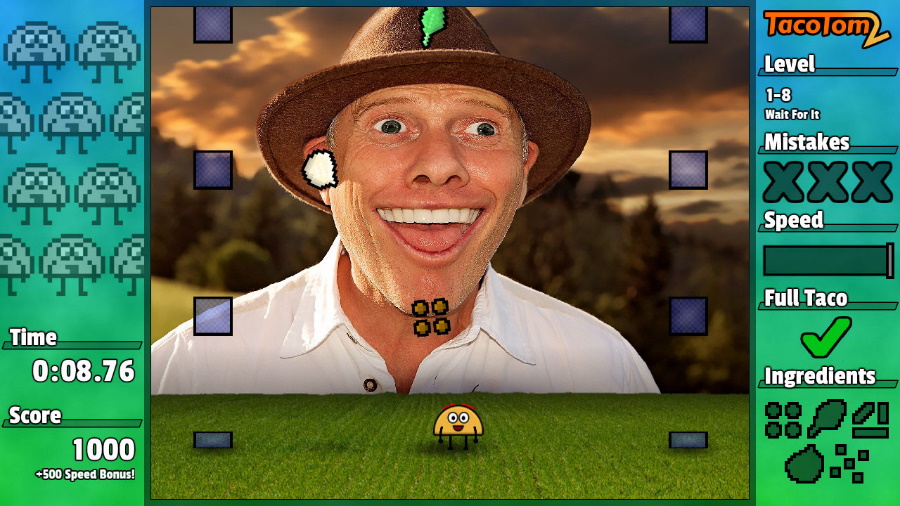 The game has a full trophy list with a Platinum trophy, and since this is a Cross-Buy release, each version will have its own Platinum trophy. The list includes 2 Bronze trophies, 10 Silver trophies, and 8 Gold trophies. You’ll get most of the trophies for playing through all of the game’s levels. There’s one trophy for which you have to go into the settings menu, select plastic, and play the level that takes place in the supermarket so that you can get the Plastic Love trophy. You’ll also have to make a taco in Arcade Mode in 2 seconds or less, get a +500 speed bonus in Arcade Mode, collect 30 stars in total, complete any world in Random Mode, and beat level 2-9 in Endurance Mode. 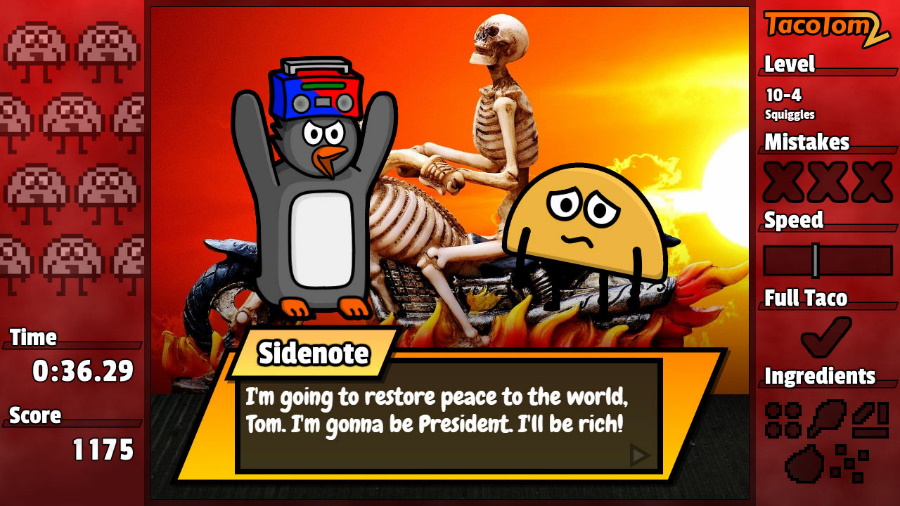 If you’re in the mood for a visual novel/arcade game with royalty-free stock photo background images in which you must build a ton of tacos, then Taco Tom 2 on PlayStation is definitely going to scratch that very specific itch. Taco Tom 2 is available as a Cross-Buy title, so your $5.99 purchase will give you access to the PlayStation 4 and PlayStation 5 versions, and each one has its own Platinum trophy. 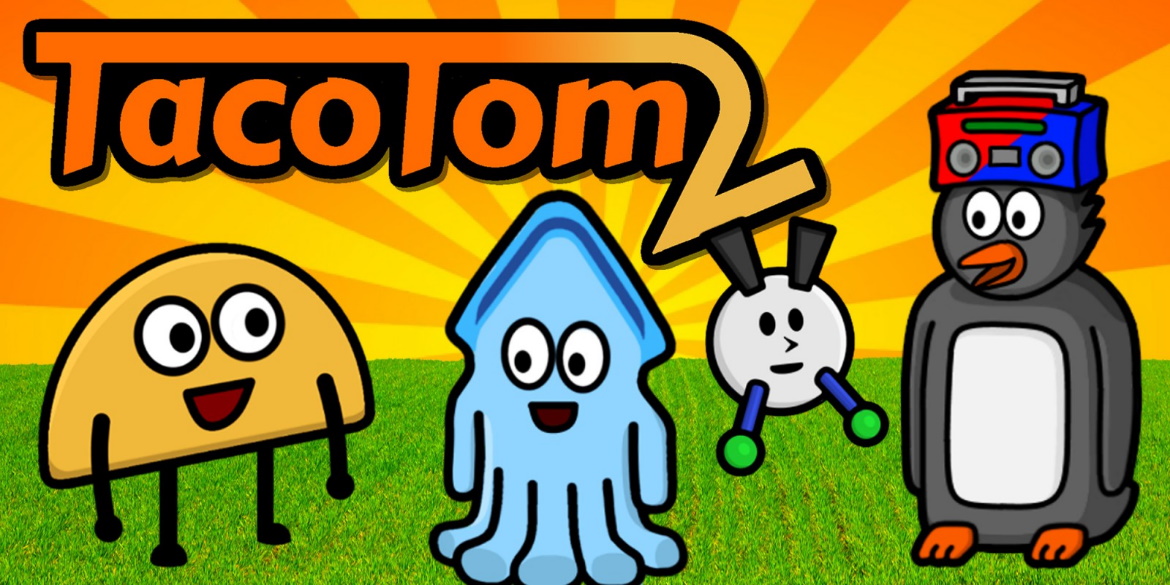 Disclaimer
This Taco Tom 2 review is based on a PlayStation 5 copy provided by Penguin Pop Games.