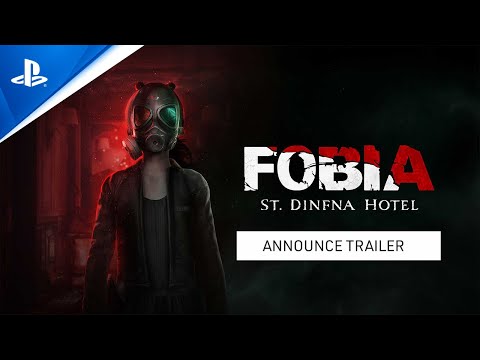 Fobia – St. Dinfna Hotel from Maximum Games and Pulsatrix Studios is a first-person survival horror game that has you try to escape and unravel the hotel’s mysteries. The game begins with a prologue that has you waking up trapped in a prison cell with blood on the floor. On the floor, you find the key to your cell with a note that says: “run.” Once you think you’ve managed to escape, a giant humanoid creature with a mutated arm comes after you and seemingly kills you. This is when you are taken back to the beginning of your story as you arrive at the titular St. Dinfna Hotel.

You are Roberto, an aspiring journalist that was contacted by someone named Stephanie to investigate all the supernatural and strange things happening in the area. A week later, as you are about to leave with no contact from Stephanie and nothing to report, you end up in the shower and see some weird hole appear in the wall as you collapse. You then wake up in the room, which looks like it was ransacked, and someone knocks on your door, but the door is stuck. From there, you’ll try to figure out what happened to you, to this place, and how you can escape from there and help those people that seem like they are trapped because of a dangerous cult.

You’ll play the game from a first-person perspective, where you move around with the left analog stick and move the camera with the right one. The L3 button will be used to run, and the R3 will be used for turning your flashlight on or off once you get it. The X button will be frequently used as it is for interacting with objects, while the Circle button is to crouch and the Triangle button to access your inventory and documents. Once you gain access to weapons, you’ll use the typical combination of the L2 button to aim and the R2 button to shoot. The L1 button will be used to heal yourself if you have any healing items.

In classic survival horror fashion, the game doesn’t feature lots of enemies, so most of your time is spent solving puzzles, going from one room to another, gathering the necessary objects to allow you to solve things like locked suitcases or doors, in order to gradually progress through the story. There aren’t a lot of hints as to what you can interact with, so you really have to sweep through everything in each room to figure out what you can do. You also have limited space in your inventory… unless you find additional suitcases that upgrade your inventory capacity.


In terms of visuals and atmosphere, the game does a really good job of putting everything in place for a tense adventure. Hotel corridors are narrow, not well lit, and you’ll see more apparitions than you could wish for to be on your toes at every corner. A lot of effort was also put into the sounds, kept to a minimum, to have you stress over any sound that came out of nowhere.

I’m a fan of classic survival horror games, and with the Resident Evil series having recently hit it strong with their first-person iterations, this game was bound to be interesting. After spending a bit of time with the game, I felt like it had what it takes to be a solid game in the genre. Focusing mostly on puzzle-solving, I really loved how you had to do thorough searches to be able to find what you needed to progress. Puzzles were not necessarily complex, but you have to find the right thing to be able to progress.


Where I had a bit of difficulty with the game was with the inventory management. Not with the fact that space is limited, because it’s what partly makes survival horror games, but because you’re sometimes blocked from progressing since your inventory is full and more than half of it can’t be discarded. So you must either find a pouch to add more space, which is not always possible, or you discard ammo or healing items, which means they’ll be gone for good.

As for the trophies, things might be a bit challenging to reach the platinum. A lot of the trophies will unlock naturally while playing, but things like collecting all the documents from the survivors will require extra attention and will require you to check every corner of every room. Where things might become a bit more challenging is for the trophy that requires you to beat the game without taking damage. You also need to beat the game three times, so doing a no-damage run might be best for your second or third run, when you know exactly what needs to be done and can take advantage of some bonuses during a New Game+.

FOBIA – St. Dinfna Hotel is a really good survival horror game that’s definitely worth checking out. It has some nuisance with the inventory system, but this shouldn’t stop you from trying it out. The game is available on PlayStation 5 with a $29.99 asking price, and you can also get a PlayStation 4 version as a separate purchase.

Tense survival horror game with a focus on puzzle solving

Disclaimer
This FOBIA – St. Dinfna Hotel review is based on a PlayStation 5 copy provided by Maximum Games.

Bright Memory: Infinite Out Next Week

[PS4Blog.net Interview] Mighty Yell On The Big Con – GRIFT OF THE YEAR EDITION