Bright Memory: Infinite is the sequel to the highly successful Bright Memory by FYQD-Studio. It is a fusion of the FPS and action genres that features lightning-fast combat and dazzling combos through an array of weapons, skills, and abilities.

Bright Memory: Infinite from FYQD-Studio and PLAYISM is a first-person shooter set in the near future of 2036. It’s Chinese New Year’s Eve, and main character Shelia, a member of the SRO (Supernatural Science Research Organisation), receives a call about an anomaly: a black hole has formed nearby and must be investigated! As she goes on to investigate, she’ll discover beautiful and lush locations, some of which are based on real-life locations in China. She’ll also meet strong resistance from enemies that will do anything to stop her. 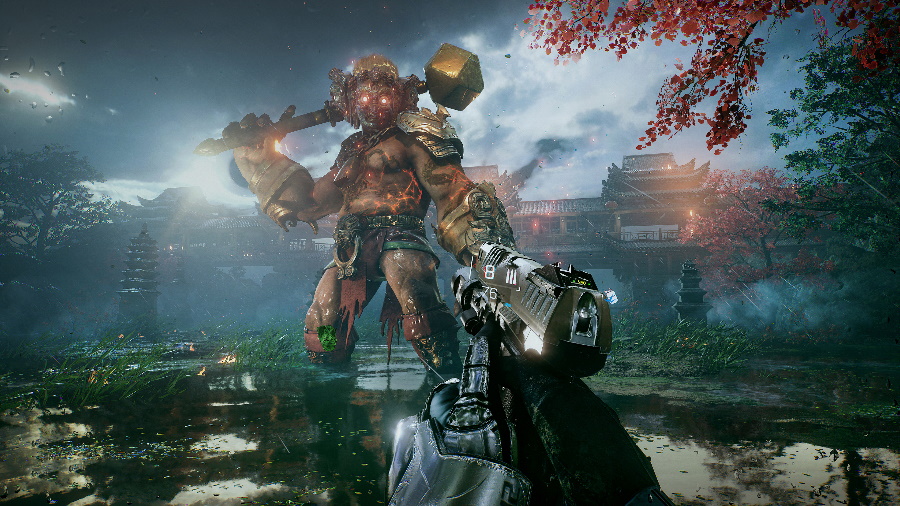 On the gameplay side, with this one being a first-person shooter, the controls felt comfortable as soon as I began playing. You’ll move Sheila with the left analog stick and use the right one for controlling the camera and aiming. Firing your equipped weapon is done by pressing the R2 button, and jumping (and double jump) is tied to the X button. The DualSense adaptive triggers are supported in this game but are disabled by default. I highly recommend finding the option and activating it manually, as it certainly adds to the shooting experience!


The levels are gorgeous, and I liked how this game took inspiration from the Uncharted and Tomb Raider franchises since the environment can be climbed, you can crawl beneath tight spaces, and even take on some dynamic wall running. Many of the jumps can feel a bit tight, but you’ll quickly get the hang of things. If you’re defeated or make a mistake during a jump, you’ll be back at the last checkpoint. Sure, you’ll have to defeat all enemies leading up to when you failed, but you’ll now know what to expect. The experience is a bit linear at times, but that’s how the developer wanted this one to feel, taking you from one area to the next in a smooth transition. 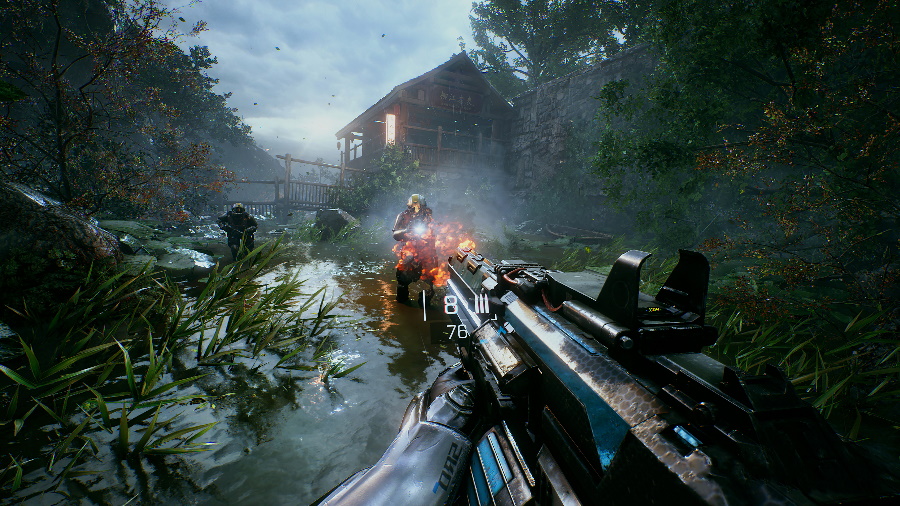 On the difficulty side, there are four modes ranging from Easy to Hell, with Hell being blocked until you have completed the game once in Revenge, which would be the equivalent of the hard difficulty option. You’ll have to select the difficulty at the beginning, and there’s no option to change it mid-game, which means once you’ve made your choice, you’re in it to win it. When playing on Violent – which is the standard difficulty setting – the game’s challenge is manageable. If you’re new to the FPS genre, I suggest that you play this one on Easy.

One thing that felt redundant at first was how repetitive the enemies were. There isn’t a huge variety of enemies at first, so as you take on wave after wave, you’ll easily find a way to defeat them. But as you progress further and run into enemies with new melee and long-range weapons, as well as new enemies of a more mythical nature, things will feel a bit more fresh. Do know that for some scripted sections, all enemies will come at you as soon as you enter the designated area for the event, instead of, say, running from behind walls before taking on you. The presentation of this game is fantastic, and I loved exploring the different locales. The game engine is superb, and the loading is fast on the PlayStation 5’s SSD. I was particularly impressed by the foliage, which looks and feels very natural. I also liked the story elements, especially the special twists I ran into in a couple of the scenarios.


Depending on your experience with first-person shooters, Bright Memory: Infinite’s story can be completed in around 2 hours or so. The game has a full trophy list with a Platinum trophy, for which you’ll have to work on 14 Bronze trophies, 11 Silver trophies, and 5 gold trophies. Trophies will be earned after beating each of the bosses in the game’s story, for defeating enemies with specific weapons or skills a set number of times, and for clearing the game on the hardest difficulty. Since unlocking the hardest difficulty is achieved by clearing the game in the Revenge difficulty, you’ll need to get good to beat the game and then work on improving your character to take on the final challenges in Hell difficulty. If you want some tips for your trophy run, you can check out this Bright Memory: Infinite Trophy Guide.

Speaking of which, you’ll find special jade idols here and there as you explore each segment in the game. You can also find some hidden inside boxes that you can destroy. These will give you a Reliquary, which is an important item used for boosting your character! These allow you to increase the ammo types for each of the weapons that Shelia can use in combat, as well as unlock additional abilities or improve her sword fighting skills. Having access to a powerful shock punch for your Exo Arm can make a huge difference, especially during boss fights! 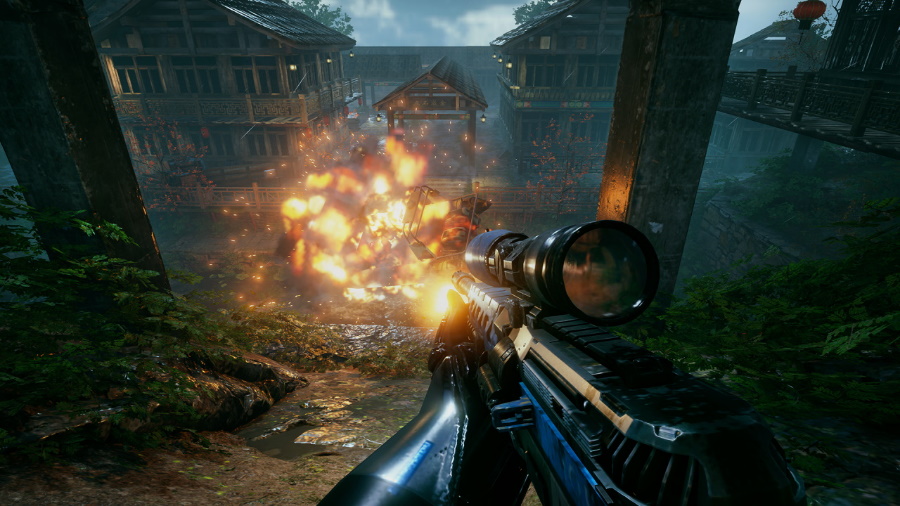 Bright Memory: Infinite is a solid first-person shooter set in the near future with truly amazing levels to explore. It’s a short game that you can probably complete in around 2 hours, but it’s going to be a fun ride in which you take on some interesting boss fights. If you’re looking for a new FPS to take on PS5, then this one is a good option. Bright Memory: Infinite is out on PlayStation 5 at a $19.99 price. 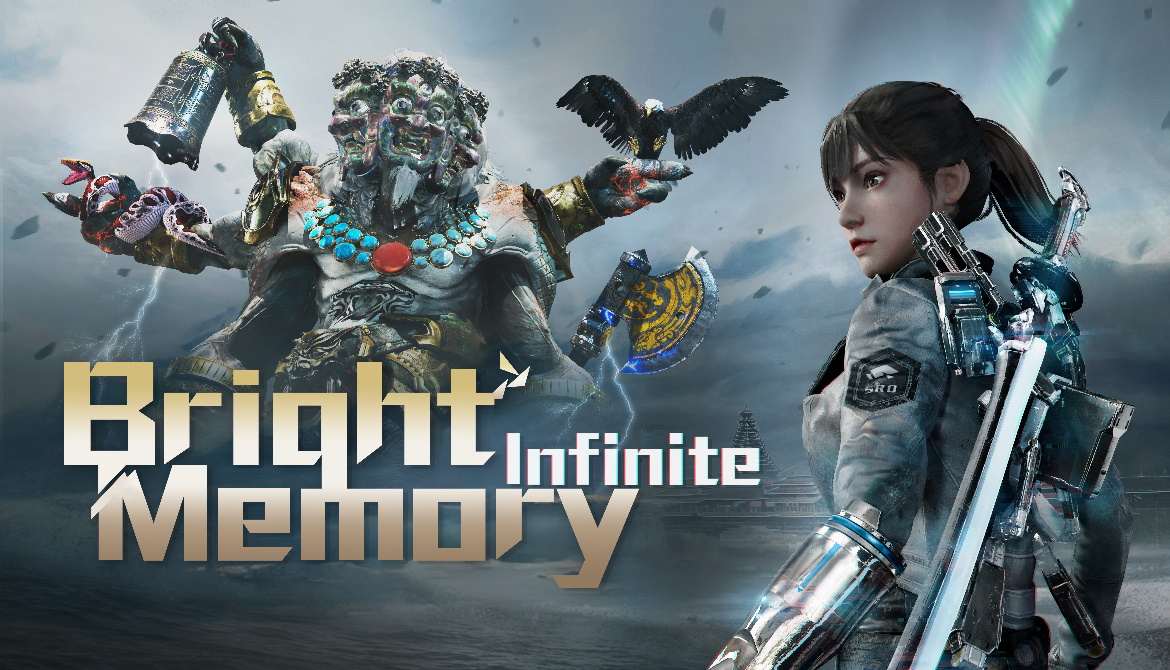 Disclaimer
This Bright Memory: Infinite review is based on a PlayStation copy provided by PLAYISM.