Super Perils of Baking from Lilllymo Games is a revamped take on the original 2D platformer in a SNES-style experience. I got a chance to review the original game on PlayStation 4 back in 2018, so I was definitely up for checking out what the studio had set out to do with this remake. The story is now presented in verse with a storybook-like presentation. You’ll be taking control of a student-baker who must stop his brother, who has been corrupted by a cursed baking hat that he found in the school’s basement. As expected, bad things started to happen after your brother put on that hat. 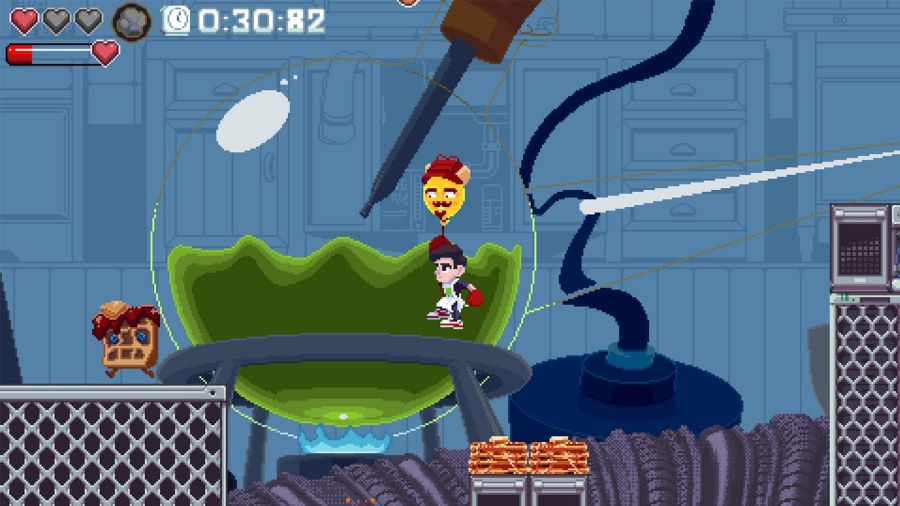 Your journey will take you through 50 levels in which 2D platforming is front and center. You’ll run and jump as you bounce on top of enemies – with some exceptions that can damage you if you land on them – to collect cookies and other sweets to boost your character. You’ll also be collecting the letters to form the word BAKE… at least if you’re the type of gamer who likes to 100% games. There are also secret warps to find, which will grant you access to levels where the difficulty is dialed up.


You’ll be running against the clock as well as you try to beat each level as fast as possible to hit the target time for the stage while trying to stay alive. No, you won’t be able to collect every sweet and every letter if you’re also trying to complete a level as fast as possible. First, you’ll need to play through a level as you learn its general layout, where bottomless pits are, and what enemies you’ll have to fight against so that you can find the best course of action for that particular level. 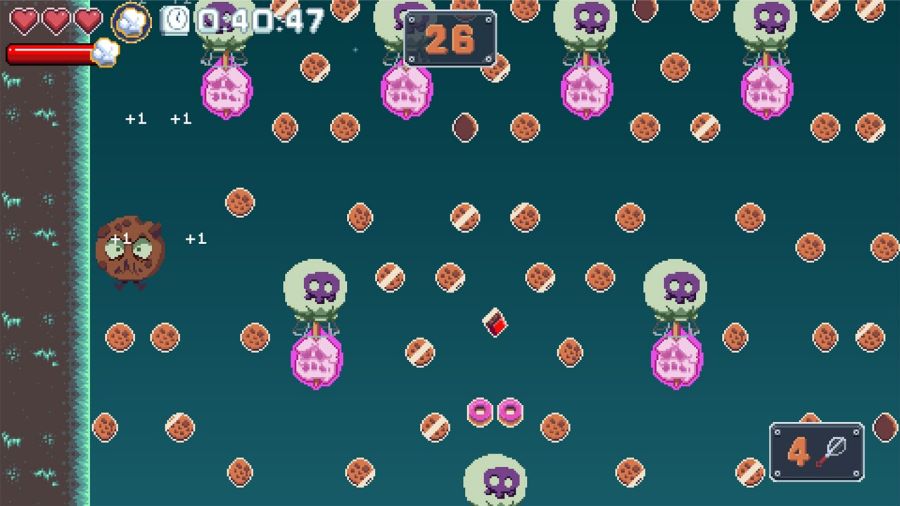 To control your character, you’ll use the left analog stick or the D-Pad. The X button will be for jumping, and the longer you hold down the button, the higher your character will jump. Press the Square button while wearing a chef’s hat, and you’ll launch a projectile. Press and hold down the Square button, and you’ll be able to run. The R1 button will be for a melee attack while wearing a chef’s hat. If you have a backup hat, you can use it with the Triangle button to instantly power up your character.


Jumping on top of enemies is how you’ll defeat most of them. If you press and hold down the jump button as you fall on top of them, you’ll be able to bounce higher. Bounce on top of five enemies in a row without touching the ground, and you’ll get an extra heart! For every 50 points you collect, you’ll be rewarded with a heart – or for 100 points if playing in New Game+. Cookies are worth one point. Chocolate is worth 5 points. A donut is worth 10 points, and popcorn is worth 50 points. If you grab a chef’s hat, then you’ll instantly be at full health – and your character will also grow a robust beard! 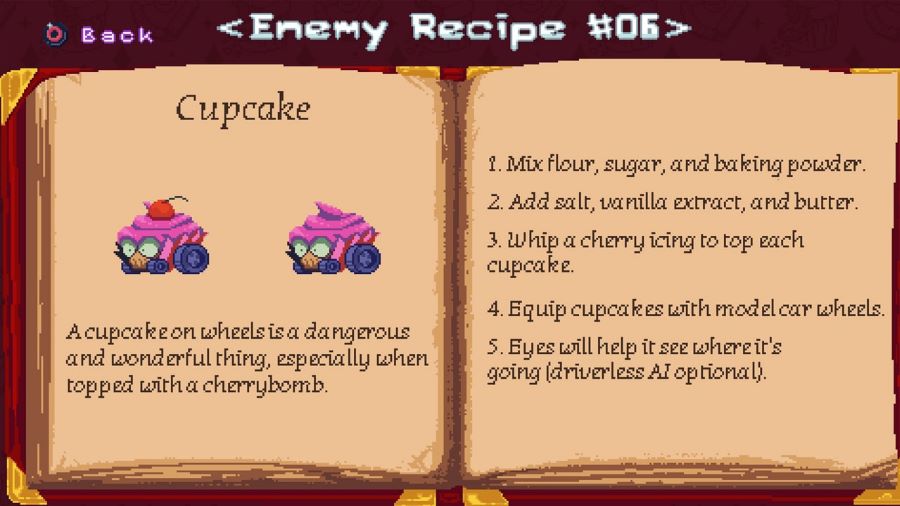 Along with the new story, the new soundtrack, and the new look, we’re also getting a new trophy list to work on for Super Perils of Baking. The list includes 38 Bronze trophies, 4 Silver trophies, and 4 Gold trophies. You’ll get trophies for taking 10 minutes to complete a level, finding a secret, dying on the first level, collecting the letters in BAKE on 20 levels, defeating each of the bosses, beating a level without collecting a single cookie, collecting ten recipes, earning all recipes, beating the time goal for 20 stages, completing the secret levels, or beating the game in New Game+. 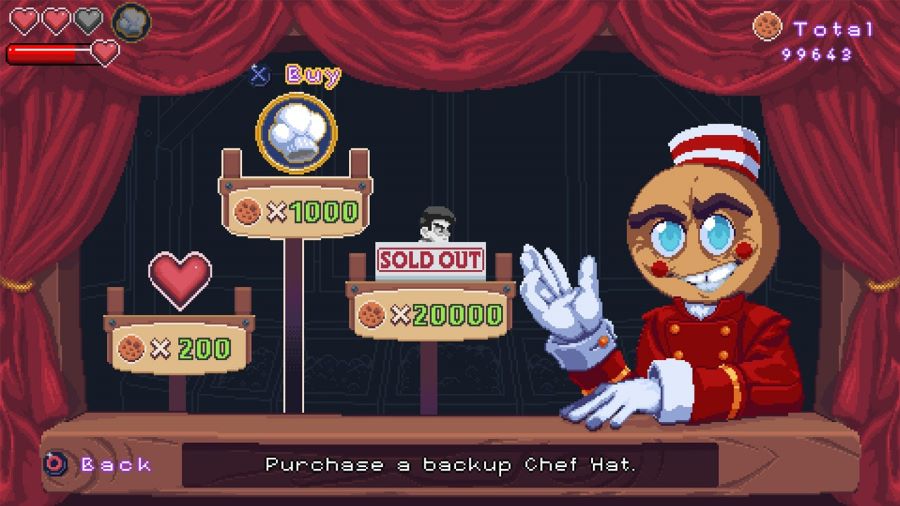 Perils of Baking was a fun 2D indie platformer on PlayStation 4, and Super Perils of Baking does a good job of taking the core experience and revamping everything by giving us a new look and feel a new soundtrack, a new story written in verse, and new content, all wrapped in a Cross-Buy title available on PlayStation for a $9.99 asking price. And you get two trophy lists to work on since the PS4 and PS5 versions have separate Platinum trophies! 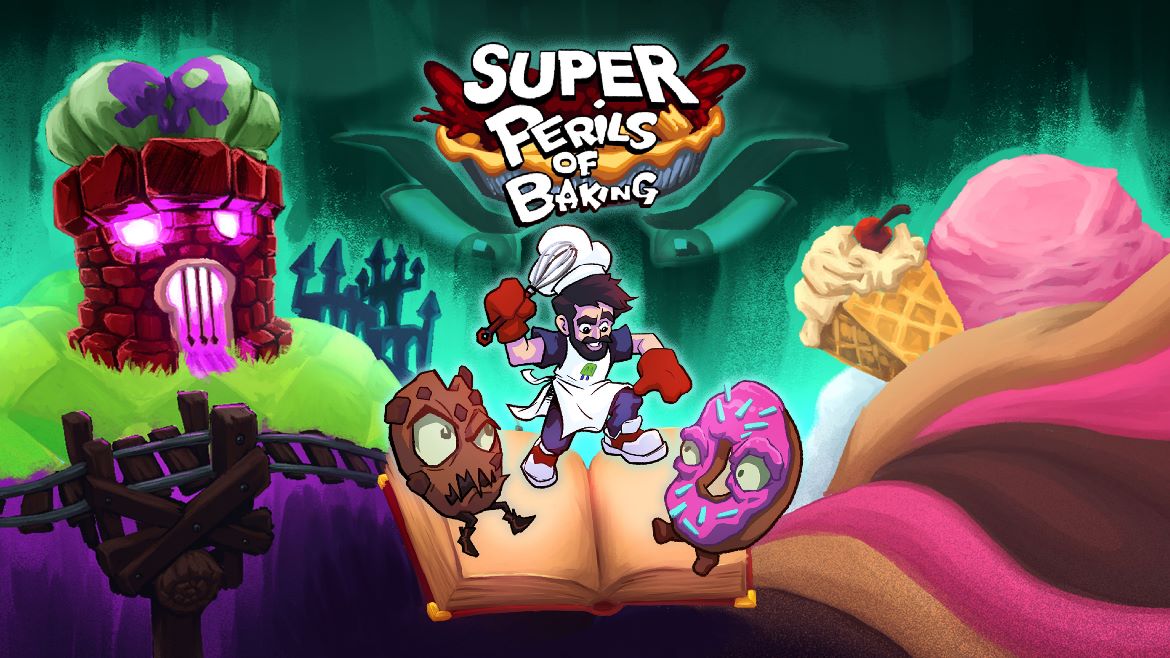 Fun remake that gives us a SNES style platformer

Disclaimer
This Super Perils of Baking review is based on a PlayStation 5 copy provided by Lilllymo Games.