Pocky and Rocky: Reshrined from Natsume brings us a reimagining of the original action-packed experience, now on PlayStation 4. The series got its start back in 1986 with the Kiki Kaikai arcade release from Taito. It was followed up with Pocky & Rocky from Natsume on the Super Nintendo Entertainment System (SNES) in 1992, which got a sequel in 1994. There was also a Game Boy Advance game called Pocky & Rocky with Becky in 2001. It’s now time for Pocky & Rocky Reshrined, which is a new take on the classic game, offering a remake that pays homage to the original while giving us new content in a sequel that re-envisions what the original had to offer. 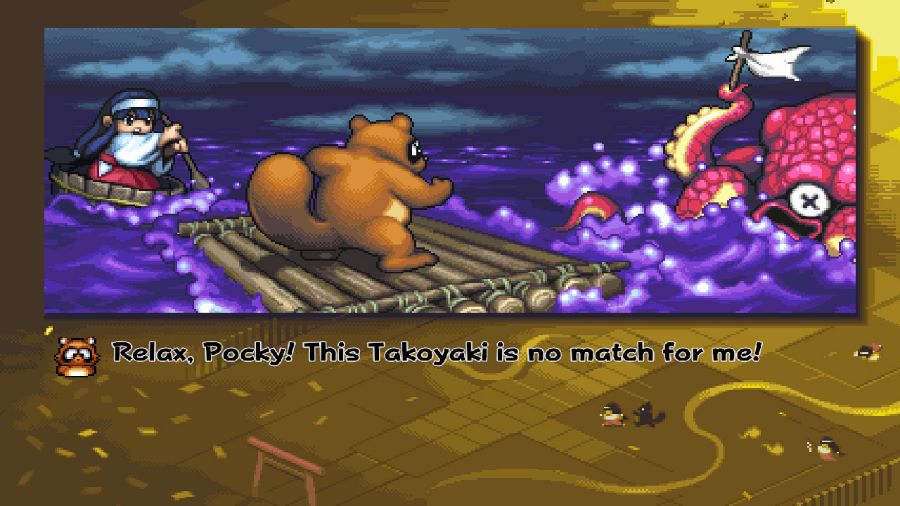 The game offers a Story Mode for you to take on, as well as a Free Mode so that you can play with your favorite character – with up to two players. To unlock Free Mode, you’ll first need to complete Story Mode or collect 10,000 coins in total. The game can be played in Normal or Hard difficulty and can unlock an Extra Easy difficulty setting once you’ve collected 3,000 coins. In the Story Mode, you’ll play as one of the five different characters in each stage that you go through, which does change how you approach things. The characters are the titular Pocky and Rocky, who are joined by Ame-no-Uzume, Ikkazuchi, and Hotaru Gozen.


You’ll move your character with the left analog stick or the D-Pad, moving in all eight directions as needed. The square button will be used for regular attacks. The X button can be used to deflect incoming bullets, remove obstacles, or deal melee damage. The Circle button is for performing a useful slide that can allow you to avoid enemies and their attacks. The Triangle button will be for your mighty special attack, which can deal considerable damage to any opponent foolish enough to come near you. 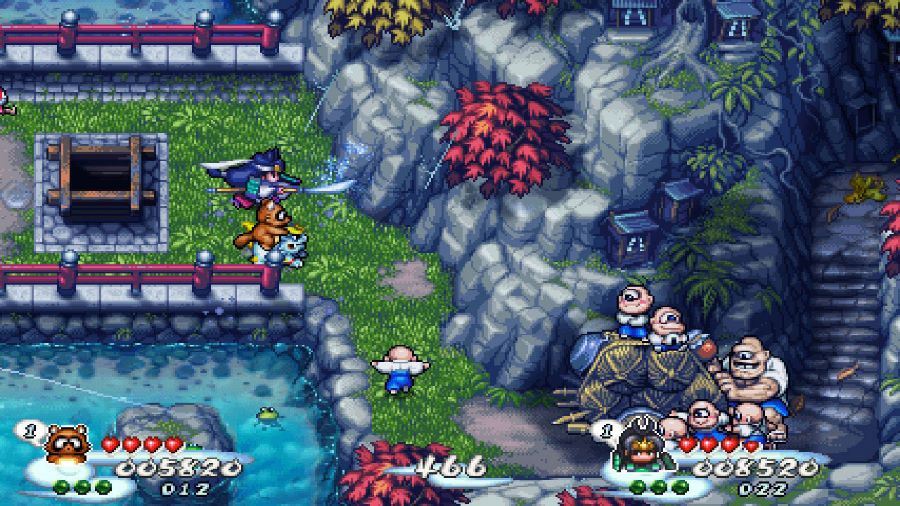 After stage 3 and on, each of the five characters in the game can use two extra abilities. Pocky will have a reflecting mirror and a rope barrier. Rocky will have a raccoon shrine and a statue transformation. Ame-no-Uzume will have triangular mirrors and divine rope. Ikkazuchi will have a clone attack and ice fangs. As for Hotaru Gozen, you will be able to use a rapid-fire attack, as well as the new moon slash, to deal a ton of damage.


On the upper left corner of the screen, you’ll see the image for your character, as well as a variety of important info. You can check out your remaining lives, your life gauge – which will go down when you’re hit – your overall score, how many coins you’ve collected, the remaining special uses, as well as the remaining time for completing the stage. Do remember that if the timer hits zero, then it’s game over! 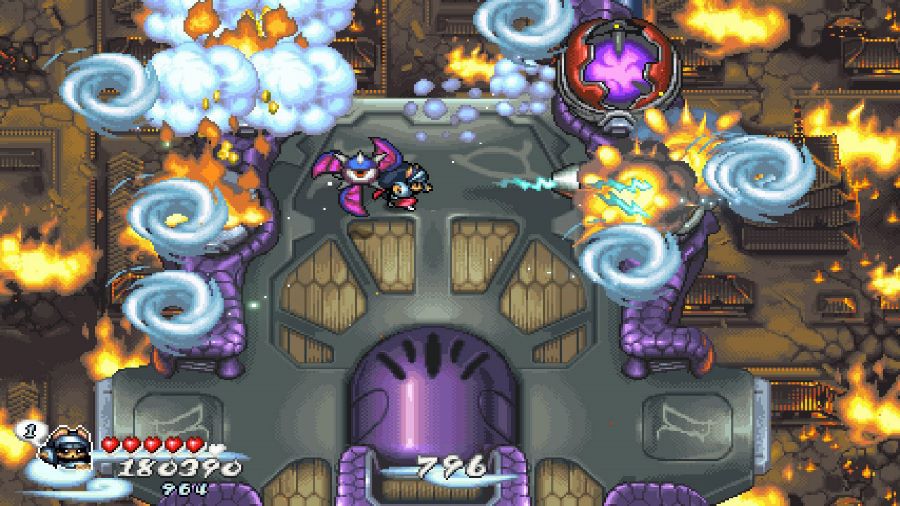 As you explore each level, you should keep an eye out for baskets, which will contain some useful items. These include an amulet that will create a special defensive barrier around your character, a thunderball that will replenish your special attack, a Komainu, which will allow you to ride the mighty lion-dog for a short period of time while you become invincible, dango, and tea, which will refill your life gauge or power balls of different colors that will change your attack. Collect several power balls of the same color to increase your attack power.


You can customize your experience in the options menu. From there, you can change display settings for the aspect ratio and scale, as well as set a scanline effect from 0 to 9 to give the game that old-school CRT feel from back in the day. You can also reconfigure button bindings for both controllers if you want to change which button is used for attacking, deflecting, sliding, or using the special. You can also change the language between English, German, French, Japanese, Korean, Simplified Chinese, and Traditional Chinese. 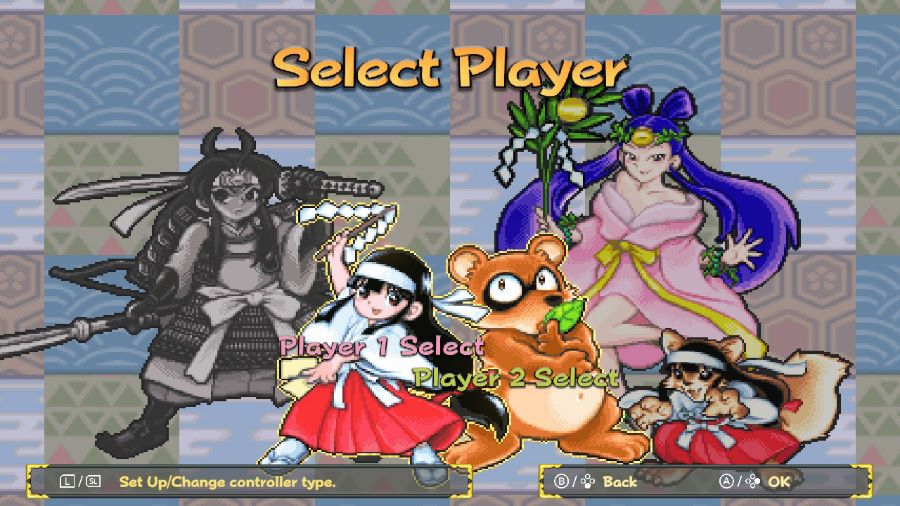 Pocky and Rocky: Reshrined brings the classic action experience to a new era in style, giving us a game that improves and expands on what the original game did way back when while continuing the tale with a new Story Mode. There are eight stages to take on as you play Pocky, Rocky, and the three new characters, which does change how you approach things since each one has different attacks and special abilities. Pocky and Rocky: Reshrined is out today on PlayStation 4 with a $29.99 asking price. 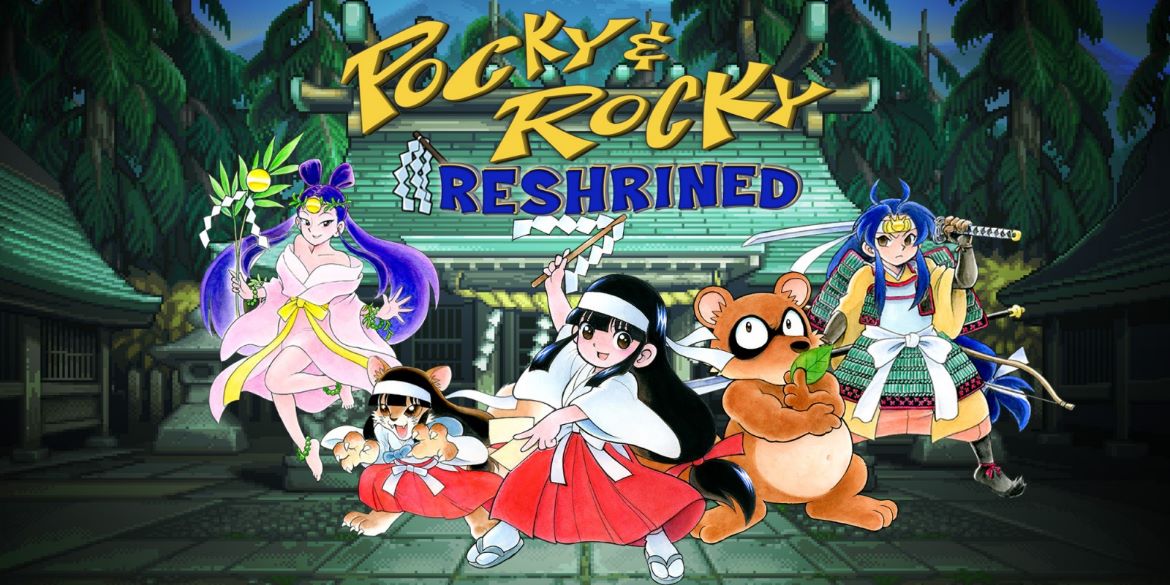 Disclaimer
This Pocky and Rocky: Reshrined review is based on a PlayStation 4 copy provided by Natsume.

Horse Tales – Emerald Valley Ranch On Its Way To Consoles