Dungeon Defenders: Awakened from Chromatic Games has finally landed on PlayStation 4. The story, which is briefly explained before starting the game, sees the four heroes that defeated the Old Ones accidentally unleash ancient forces. They see their powers being sapped as they are thrown back in time. They will have to protect the Eternia crystals and bring an end to a new time-altering enemy. The rest of the story will evolve as you progress through the main campaign at the end of each act. 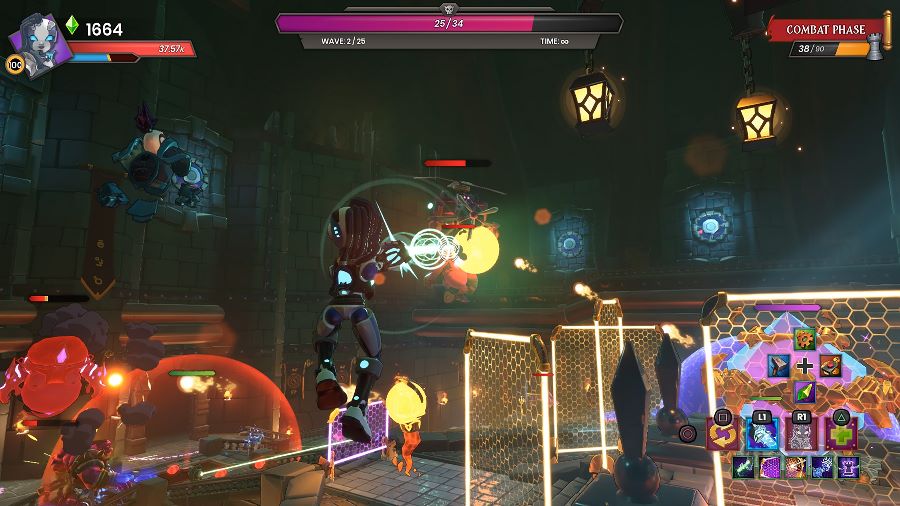 There are two main aspects to consider as you start a level. Before each wave, you’ll be entering Build Mode. In this one, you’ll be able to use the crystals that you have collected to build towers that will protect your crystal or attack enemies. To build a tower, you’ll have to press the Circle button, select the one you want with the L1 or R1 buttons, and then use the Square button to place it, with an additional press after changing its orientation. In the same way, you’ll be able to use the Up arrow in front of a tower to upgrade it, at the cost of some extra crystals, or the Left arrow to repair them during subsequent waves. While you are placing your structures, you’ll see small energy balls following paths to indicate the routes enemies will be taking when the wave starts. You can also swap heroes with the DualShock 4 Touchpad to use another class, who’ll have different structures they can build. Once you’re ready with everything in place, holding the Touchpad will trigger the start of the wave, which sees a certain number of enemies try to make their way to your Eternia crystal.


During this mode, you can still freely move around and attack the enemies in combination with what your towers will do. You can jump with the X button, and attacking is done primarily with the R2 button, or you can use your alternate attack with the L2 button. In case you are hurt, you can use the Triangle button to heal yourself, and you’ll also be able to repair your towers in the same way as in Build Mode. Once the last enemy of the wave has been defeated, you’ll be back in Build Mode to gather crystals and equipment from fallen enemies and raise your defenses, preparing for the next wave. 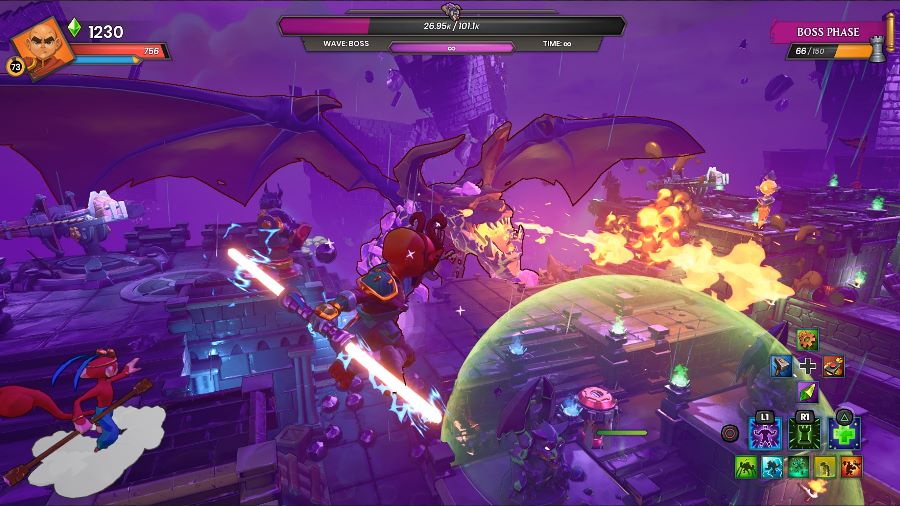 Visually, the game looks good but feels a bit outdated considering how far we are in the PlayStation 4’s lifecycle. The user interface, on the other hand, feels like a lot of corners have been cut, which is weird considering the game has been available for some time now. The functionality of the D-Pad is hard to understand, and the tutorial doesn’t guide you enough to learn all those. Items are a chore to pick up as you have to align a tiny dot on the screen on the items to have the menu open, and some menu prompts haven’t even been updated since I saw multiple times a prompt to press the A button (which corresponded to the Circle button on PS4). Even when repairing or upgrading a tower, it took me some time to understand how to do it since the menu that opened only displayed the option to Inspect with the Square button, but that was actually what I had to press to repair/upgrade.


If you put those interface issues aside, the game features a tremendous amount of content and is actually a lot of fun to play. Aside from the Campaign Mode, which has a total of 19 levels, there are five other modes that you can play, with classics like a Survival Mode and others where you only use towers or the opposite, where you fight bosses without any towers. There are also a total of six difficulty levels, so even only for the Campaign Mode, there is a lot of replay value as you can revisit maps on a higher difficulty setting after leveling up your heroes. Speaking of leveling up, there’s also a huge amount of gear you’ll find to make your characters stronger and a few statistics where you’ll be able to spend points on so that you can make your heroes stronger or with stronger structures that they can build. 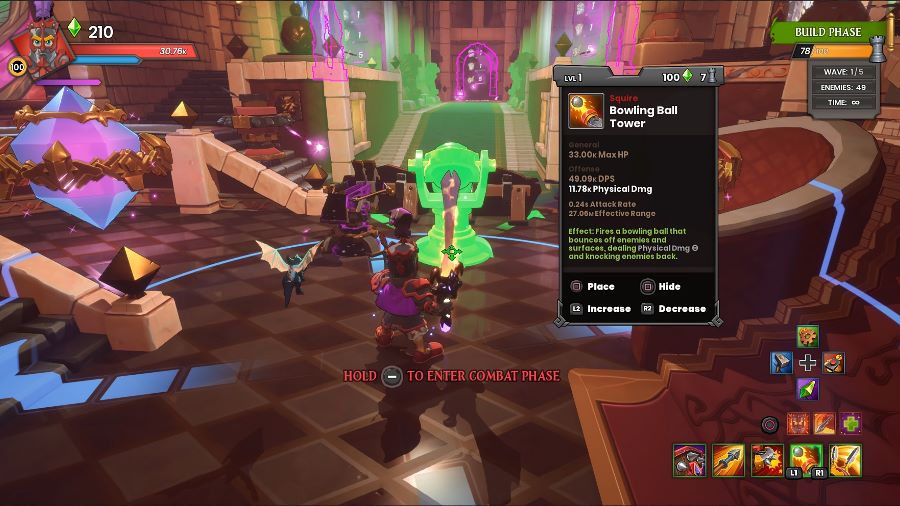 As for the trophies, it will definitely be a challenge and a time-consuming task if you want one more Platinum for your collection. For a start, you’ll need to complete each level of the campaign on the highest difficulty, Massacre. The same will have to be done for the Challenges Mode, and in Survival Mode, you’ll have to reach the 20th wave. If you can manage to do that, other trophies should come naturally, and you will eventually have a new shiny Platinum for your collection. 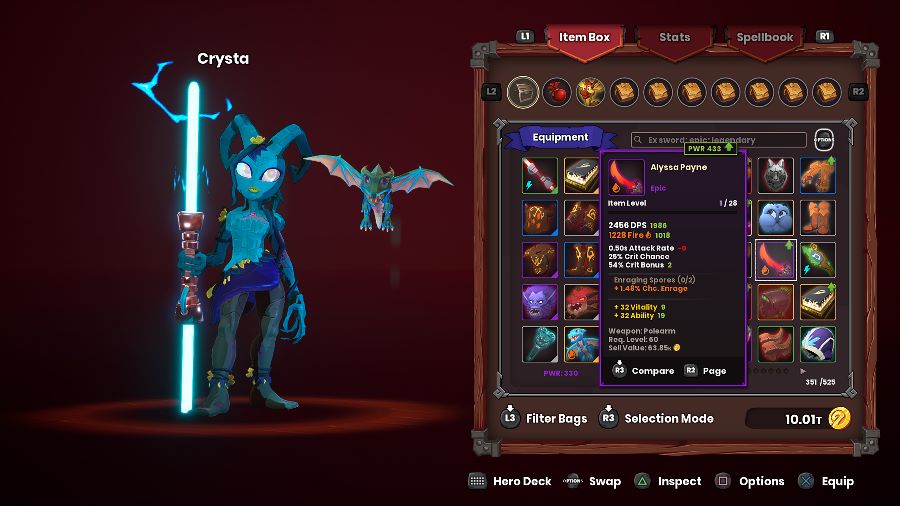 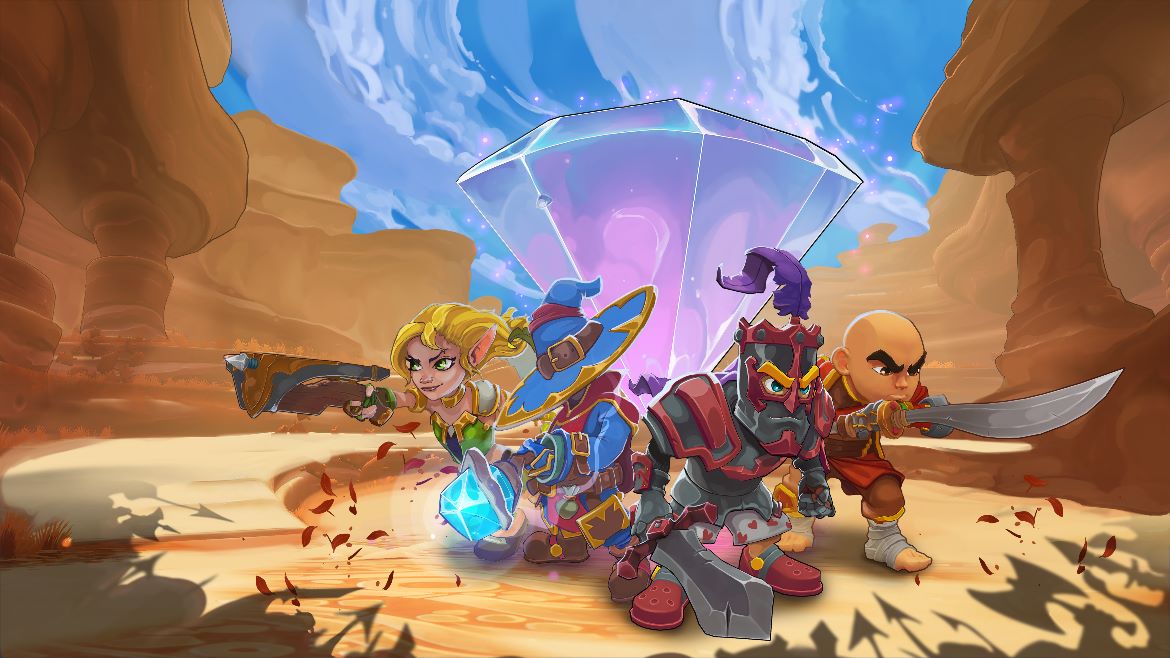 Disclaimer
This Dungeon Defenders: Awakened review is based on a PlayStation 4 copy provided by Chromatic Games.

AI: THE SOMNIUM FILES – nirvanA Initiative Out Next Week