Why Pizza? from Sometimes You and Marginal Act is a bizarre 2D physics-based platformer on PlayStation 5. Learn more in our Why Pizza? Review!


Why Pizza? from Sometimes You and Marginal Act is a bizarre 2D physics-based platformer on PlayStation 5. Your job is simple: deliver pizza as fast as possible by running from point A to point B. You have to do this so that you can earn enough money to pay for your house and food. You’ll be able to select what your character looks like. The first character is the one with the pizza face. Along with those, you can select characters with a duck head, a banana, a jar of mayo, an onion, a bottle of ketchup, a pickle, an apple, a pumpkin, a sausage, a pepper, or one that I really can’t make out since it’s pink with the lower half being brown. I went with the pizza head character to stay with the game’s team. 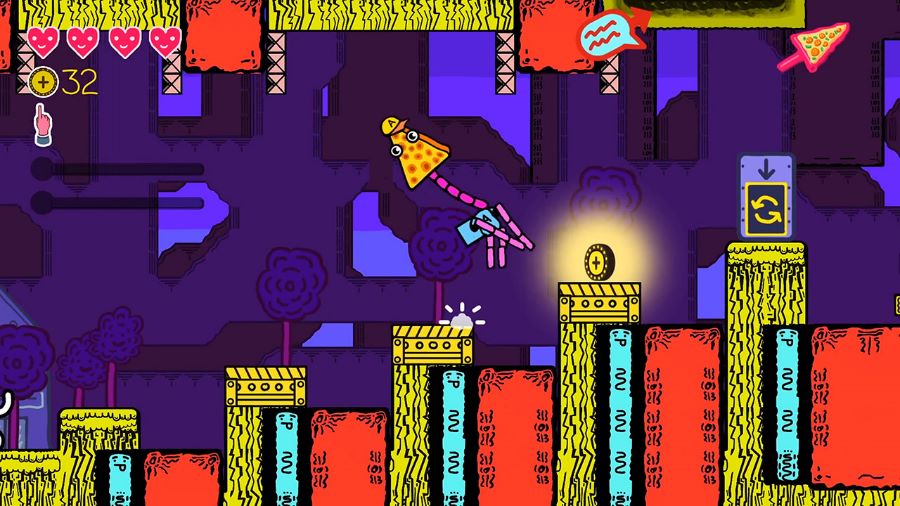 You’ll move your character with the left analog stick as you move its head with the right analog stick, rotating its hands by pressing in on the right analog stick. This can be useful if you’re carrying a tool such as a pickaxe to destroy walls. The Circle button will be for jumping, and the X button will be for actions. You can pin the head with the Square button, which will make a hand show up and pin your character’s head so that you can then jump from there to try and reach the next segment where you can pin again or each a platform. The L1 and R1 buttons can be used to dash left and right while jumping. 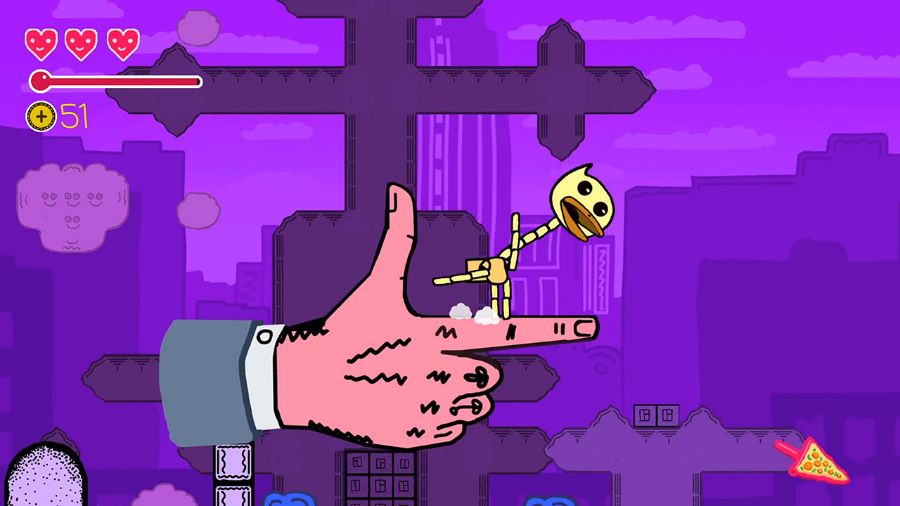 As you progress through each level, you’ll collect coins, as well as find hidden coins that count as secret collectibles. These coins can be spent at the stores between some stages. You can spend your coins on buying extra hearts for additional hit points or purchase one pin finger for pinning your head. Or perhaps you’d like to buy a shield that is powerful enough to destroy lava? These upgrades will definitely help and will make it easier to clear subsequent levels, especially the extra pins for your head. 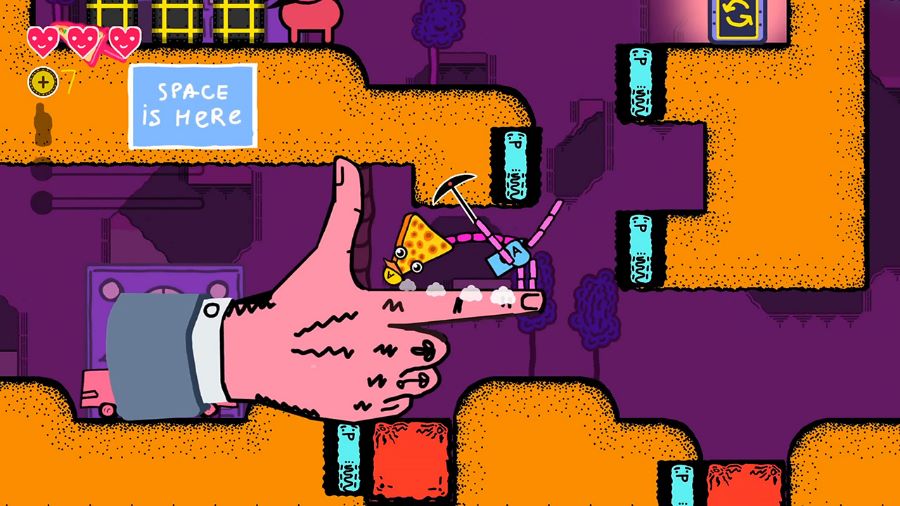 Trophy-wise, this one has a full trophy list with a Platinum, and it’s not a complex or challenging one to work on. The list includes 2 Bronze trophies, 2 Silver trophies, and 10 Gold trophies. Said trophies will unlock as you start to play levels 1 through 14, so as long as you can manage to complete the first 13 levels in the game, you’ll have another Platinum trophy in your collection in around one hour at most. If you want some extra visual aid, you can check out this Why Pizza? Trophy Guide. 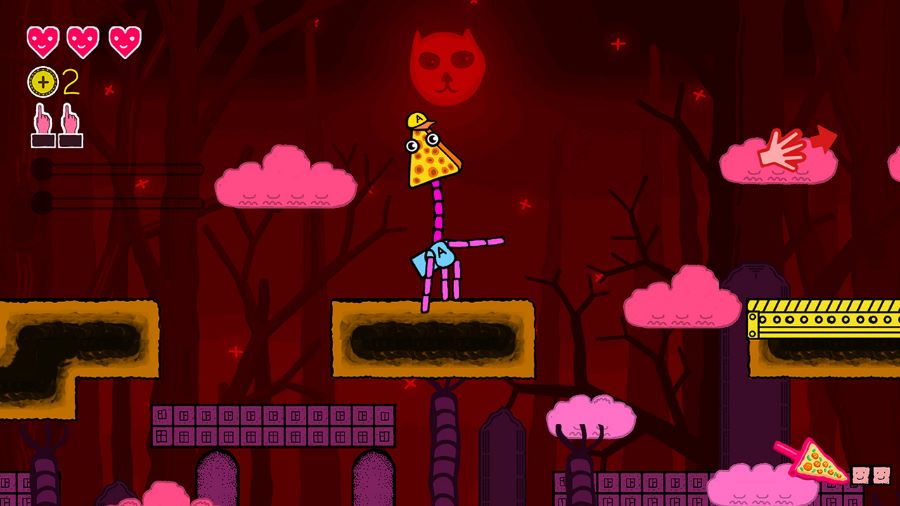 Why Pizza? is a bizarre 2D physics-based platformer in which you’ll have to be fast and use your abilities to deliver a pizza as fast as possible. By pinning your character’s head, you can set things up to clear some obstacles instead of having to find an alternate route, so I definitely suggest that you spend your coins on buying extra uses for said ability. Why Pizza? is out today on PlayStation 5 with a budget price of $4.99. There’s also a PlayStation 4 version available for a separate purchase of $4.99. 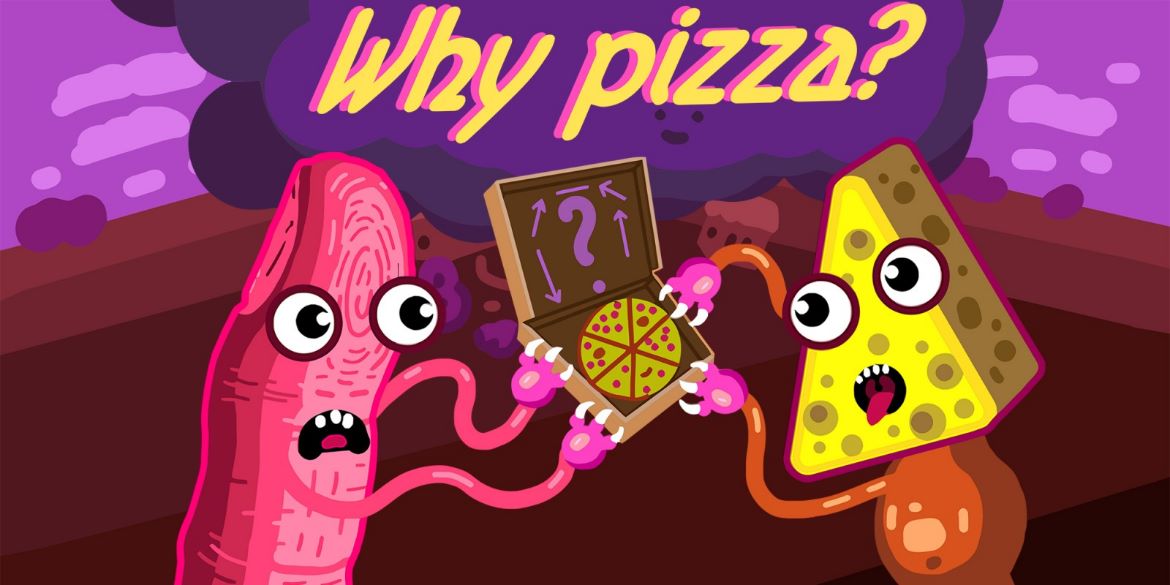 Disclaimer
This Why Pizza? review is based on a PlayStation 5 copy provided by Sometimes You.