TEN from Ratalaika Games and The Bworg is a challenging 2D minimalist platformer that will test your skills on PlayStation. Learn more in our TEN review!


TEN from Ratalaika Games and The Bworg is a challenging 2D minimalist platformer that will test your skills on PlayStation. The game gets its name from the fact that you’ll be taking on ten floors while trying to stay alive for ten seconds in each room. The only exception to this rule are the boss rooms, which will have more than 10 seconds on the timer – so you’ll have to avoid attacks and hazards for a bit longer to clear the room – as well as some special rooms in which you’ll take on a different type of challenge. There’s a lot of trial and error in this one! 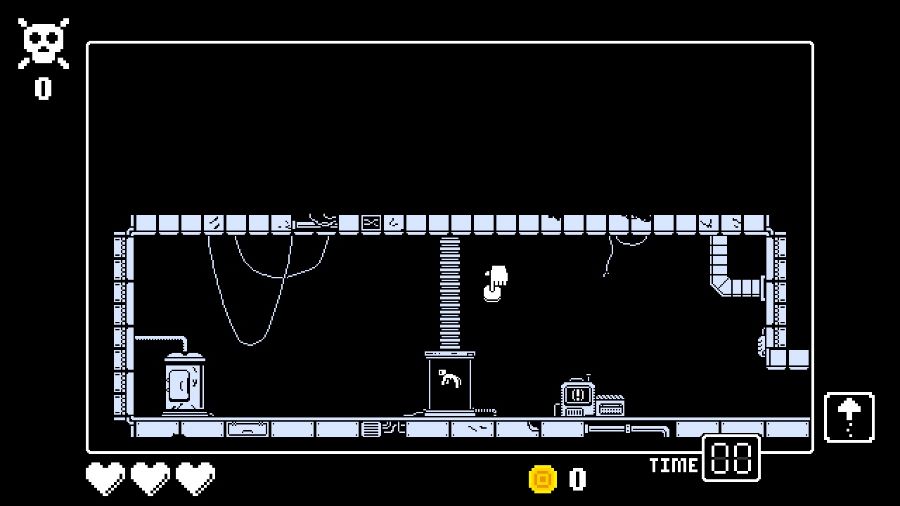 As you explore each room, you’ll have to avoid a variety of hazards, such as buzzsaws, giant grinders that will chase you around the room, spikes that pop out of the floor, disappearing platforms, air currents that push you around, turrets that shoot at you, heatwave shooting metal plates, lasers, bombs that will go boom when the timer reaches zero, machines that dump objects on your path, killer robots that will chase you as they shoot powerful bullets, sharks, tanks, falling spikes, and more!


The controls are very simple since all you need to worry about is to move your character around the screen with the left analog stick or the D-Pad, as it jumps with the X button. Anything on the screen that is red can and will hurt you, so you need to avoid it as the timer counts down to zero while you collect any tokens on the screen. This is important because once the timer reaches zero, all tokens will disappear! 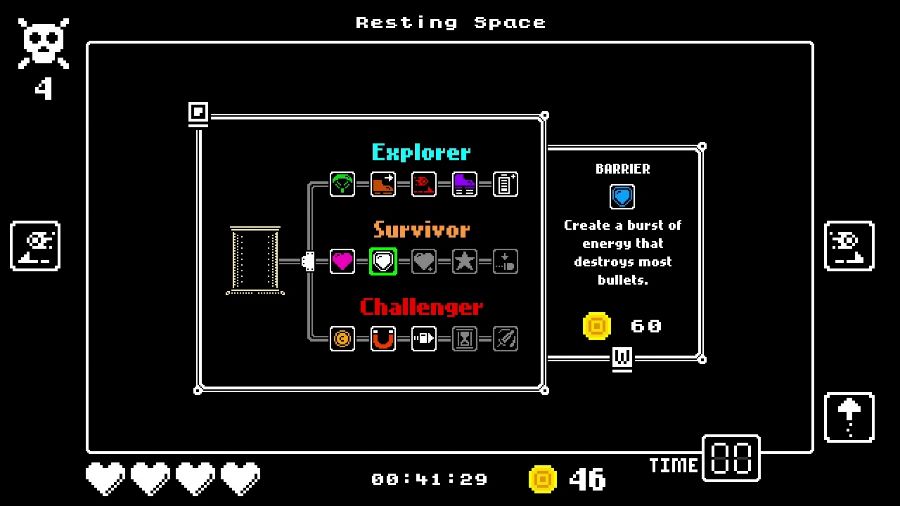 Tokens can be used at the start of each floor – from the second floor and on – when you visit the resting room. Each resting room will allow you to relax for a bit as you take advantage of the unlimited pizza to recover your health. The good news is that pizza is free! You can spend your tokens at the upgrade machine in the resting room to improve your character by unlocking each of the nodes in the three different upgrade paths: Explorer, Survivor, and Challenger.


The Explorer path gives you access to Slowfall, by which you can hold down the jump button to float down to the ground; Adrenaline, which allows you to move a lot faster; Dash, which makes it possible to quickly rush left or right to avoid hazards; Double Jump, which is self-explanatory; and Energy Boost, which makes it possible for your abilities to recharge faster. The Survivor path has an Extra Heart to boost your health; Barrier, which creates a burst of energy that destroys most bullets; a second Extra Heart; Endurance, which doubles your invulnerability after taking damage; and Action Hero, which makes enemy bullets move at a slower pace. 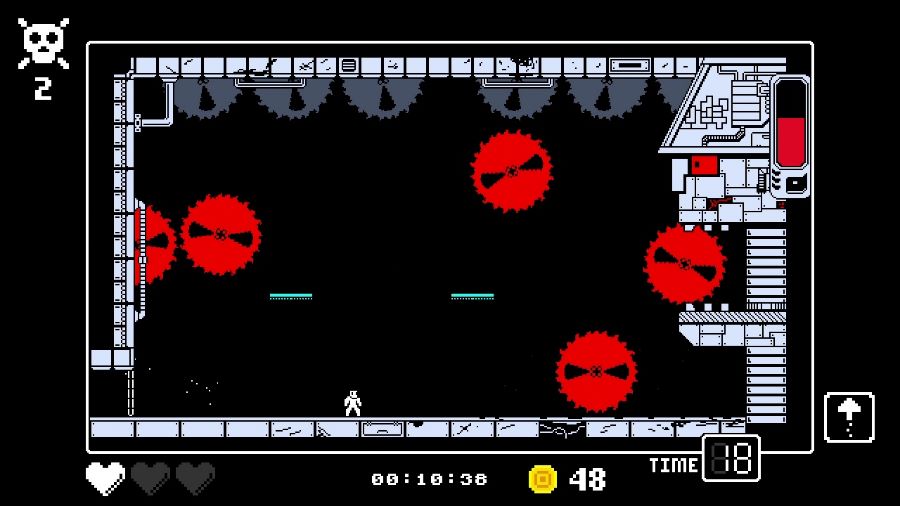 The last available upgrade path you can work on is Challenger. This path has the Challenge Tokens ability, which makes some rooms have special “tricky” tokens pop up; Magnetism, which draws in tokens – you know, because of your magnetic personality; Soulshot, which has you spend a heart to fire a piercing bullet that can defeat most enemies; Time Out, which lowers the timer in most rooms by one second; and Retaliate, which sometimes destroys an enemy that damages you on contact.


As for the trophies, TEN has a full trophy list with a Platinum trophy for your collection. And since the game is Cross-Buy, if you own a PlayStation 5, you can download the PS4 and PS5 versions of the game, and each one has its own trophy list! The list is split into 11 Gold trophies. You’ll have to collect over 100 tokens, beat each of the game’s bosses, have a frog jump to its death, purchase, and upgrade, complete the game, and complete the game with a grade of C or better, which is awarded depending on how many times you died during your run and how fast you managed to complete the game. 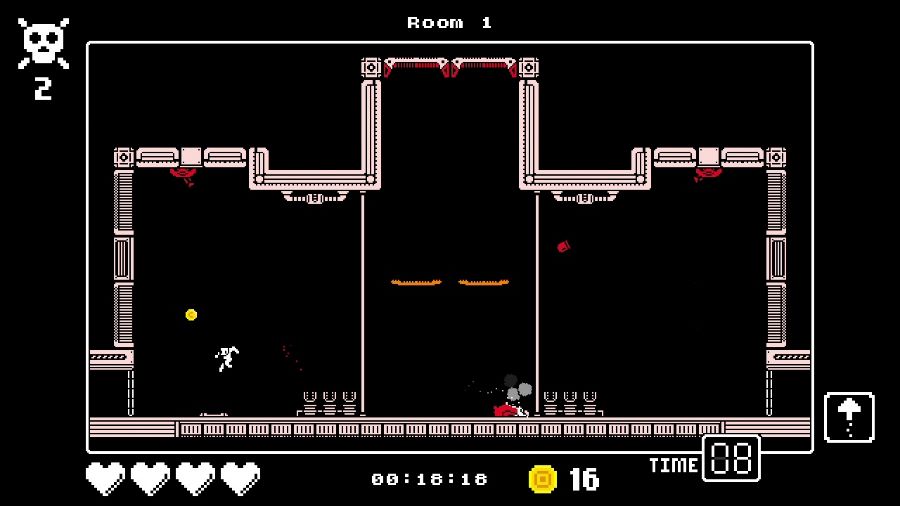 TEN is a challenging but fun 2D minimalist platformer that will test your skills as you try to survive through each room, collecting tokens to upgrade your character so that you use new skills and health boosts to survive longer so that you can escape from the facility. The game is available as a Cross-Buy title for only $4.99, giving you access to both the PlayStation 4 and PlayStation 5 versions of the game, with separate trophy lists for twice the Platinum fun. 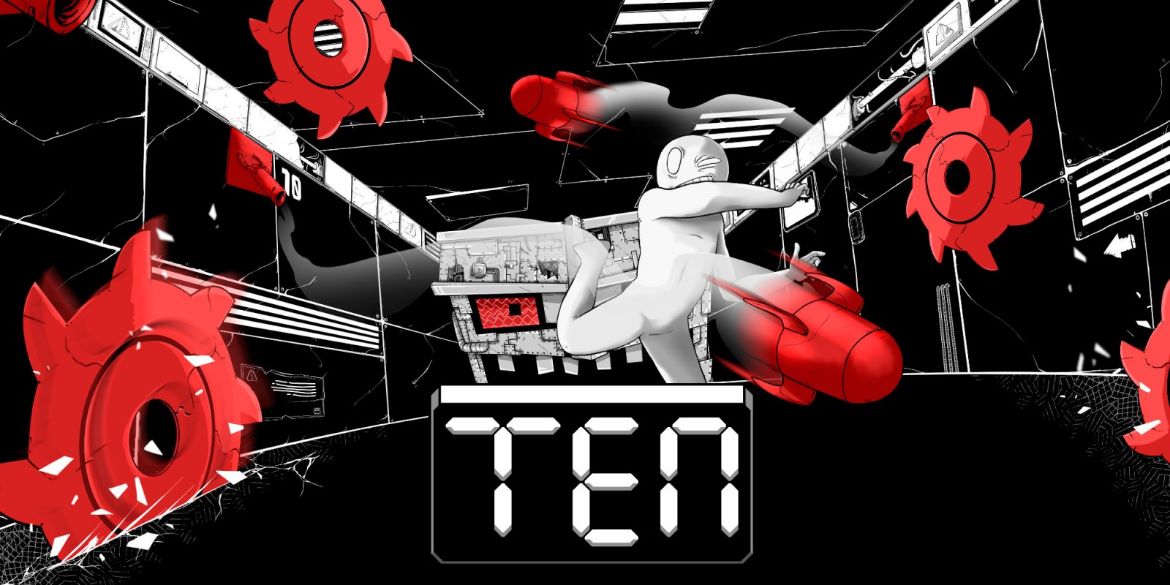 Disclaimer
This TEN review is based on a PlayStation 5 copy provided by Ratalaika Games.