Amazing Superhero Squad from Sometimes You places you in control of a team that must save Storborg City from looming disaster. You’ll need to stay sharp as you take care of the different requests that will be sent your way so that you can help not only the citizen of Storborg City but also the Corporation itself. Money is a very important resource in this day and age! The game’s art style will certainly grab your eye, and the excellent synthwave soundtrack will do a great job of setting up the mood for the game. 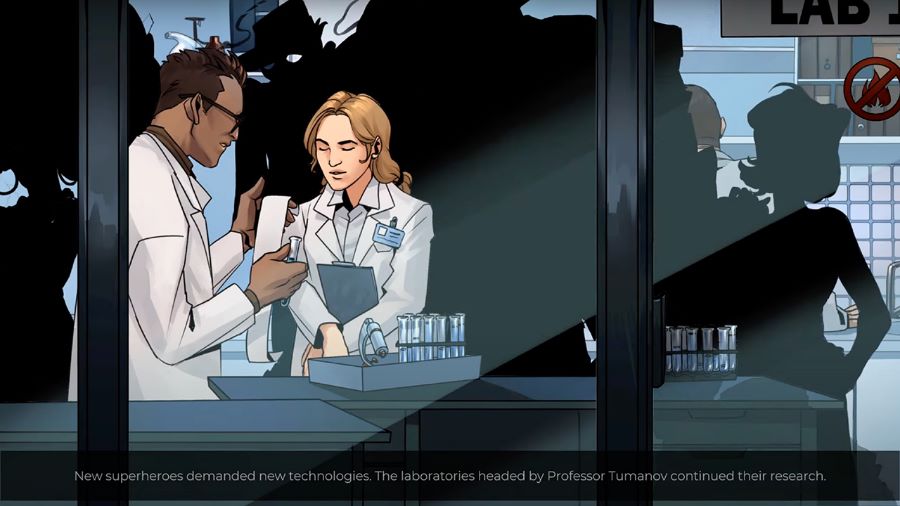 You’ll start your journey at your workplace, where you’ll receive messages about the many problems that plague the city. You’ll also get messages from the Corporation. All of this will happen each day from 8:00 to 20:00. As the name suggests, it’s a superhero’s job to save the day, and you’ll be able to have up to five of them on your team. Click on a superhero in your team, and you can send it on a mission… or fire said hero on the spot! It’s up to you to manage your team depending on how things are going for the group.


To be able to succeed, you’ll have to pay attention to the synergy of the event elements and the superhero that is sent on the mission. The Corporation’s interest must be monitored at all times as well, since if any of its parameters drops to zero, then it’s over for you. Pay attention to the description of each event so that you can review which parameters will be affected by said event. The parameters for the Corporation are Budget, Followers, Share prices, and Relations with the government. 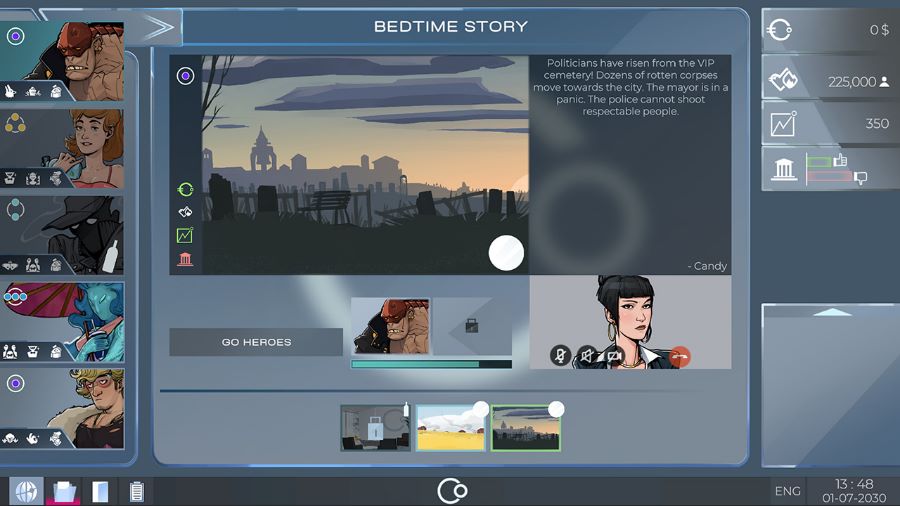 To control things, you’ll use the left analog stick or the D-Pad to pick from the heroes in your group. You can switch between events by using the L1 and R1 buttons. The R2 button can be used to send the selected supers to take care of an event. The Square button can be pressed to expand/collapse the task list. The Triangle button can be used to open the exchange, where you can spend your money to hire new heroes to balance out your team.


Each of your superheroes exists to help the city thrive since it will protect it and its citizens from danger. And they’re also, you know, there to increase profits. Every superhero will correspond to one of five elements, which are represented by symbols that have different symbol patterns with colored circles. If a hero’s symbols coincide with an event’s symbol, then the odds of success will be increased. 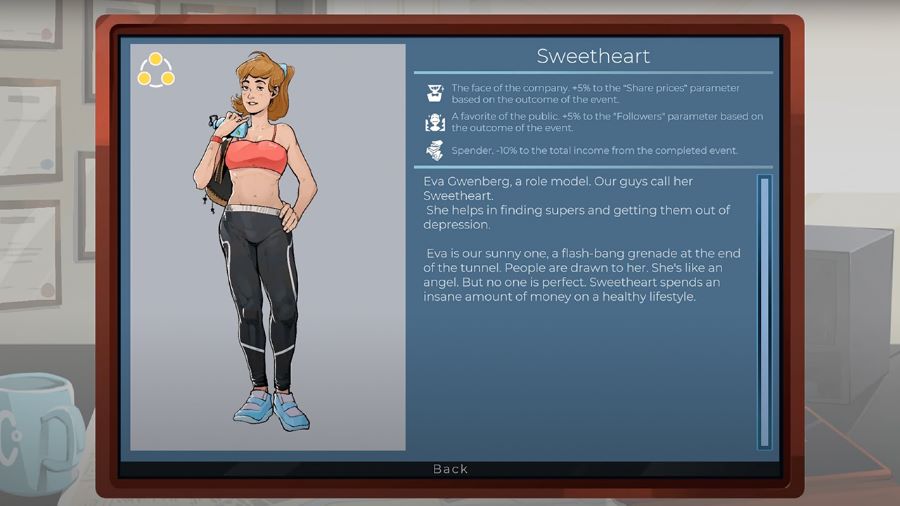 Superheroes will have special traits that must also be considered. For example, a hero that has the “The face of the company” trait will increase the Share prices parameter based on the outcome of the event. If a hero has the “Spender” trait, then a percentage of the total income from the completed event will be decreased. A hero could have the “Loner” trait, which makes it possible to increase its success rate for an event when you send it on its own to try and save the day.


The game has a full trophy list with a Platinum trophy that should pop up with a lot of hard work and perseverance. The list is split into 5 Bronze trophies, 6 Silver trophies, and 8 Gold trophies. The objectives to complete include successfully completing all events for the day, hiring a new superhero, hiring a detective, sending compatible characters to events, accumulating more than 80,000 credits by the end of the day, successfully completing each week of the game’s story, ignoring ten events, or solving a super’s problem, to name some examples. 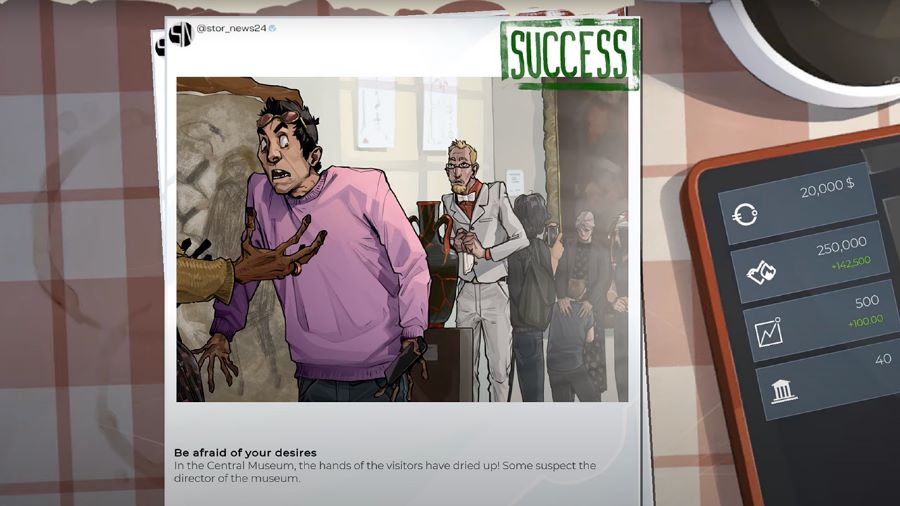 With 20 supers to add to your team, with different elements and traits to consider, there’s lots of variety to enjoy in Amazing Superhero Squad. It’s not the action-packed game that initially comes to mind when you hear a title such as Amazing Superhero Squad, but if you’re looking at checking out a game with an interesting art style, a solid synthwave soundtrack, and a story with enough twists and turns to keep you coming back for more, then this is definitely one to consider. Amazing Superhero Squad is out on PlayStation 5 with a $6.99 asking price. Since this is not a Cross-Buy title, there’s also a PlayStation 4 version available at the same price. 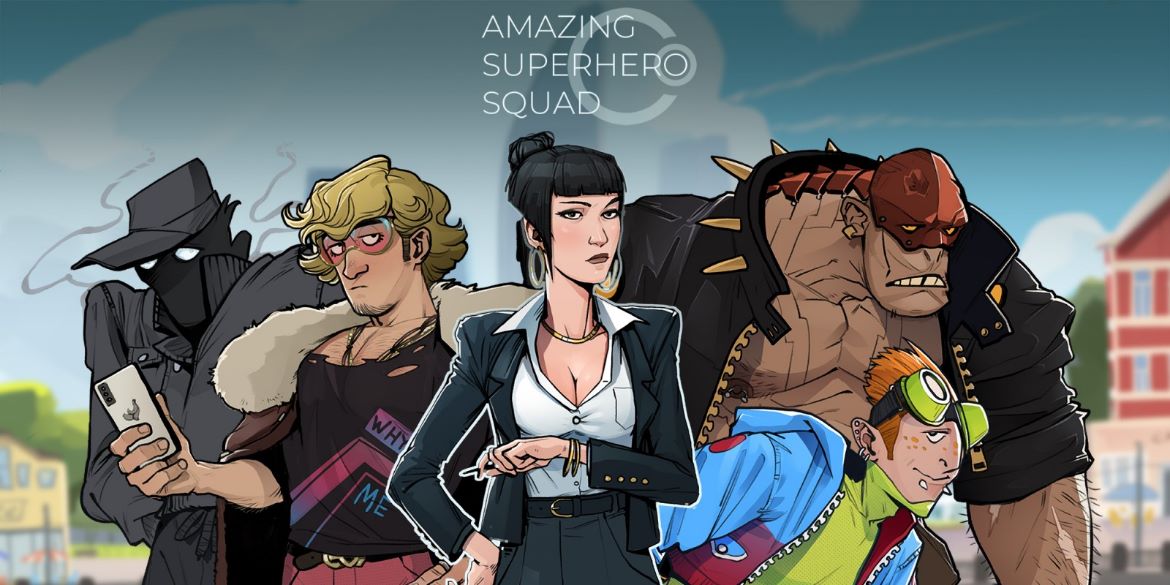 Disclaimer
This Amazing Superhero Squad review is based on a PlayStation 5 copy provided by Sometimes You.