Steve Jackson’s Sorcery! The Complete Collection from inkle and No Gravity Games brings us the quadrilogy of stories to Nintendo Switch. You’ll take on a journey through an epic land packed with monsters, traps, magic, and treasures as you explore hills, forests, cities, dungeons, and more. Every choice you make will have an impact on how the story shapes up and what paths you can take. You’ll have to pay attention to what you should and shouldn’t do in each scenario since it could open up a new area to explore… or could signal your end. 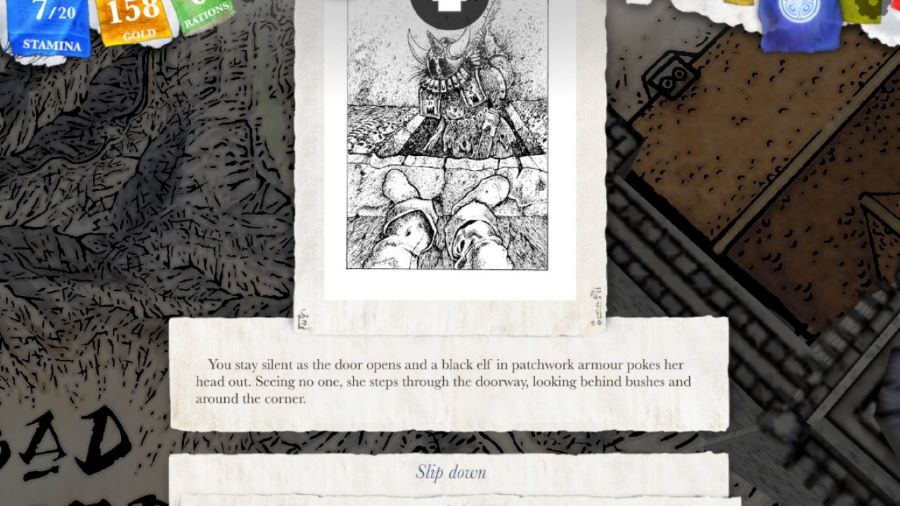 Based on the best-selling gamebooks from beloved author Steve Jackson – who you definitely know from the beloved Fighting Fantasy series of books – Steve Jackson’s Sorcery! The Complete Collection packs a ton of content into a single release on Nintendo’s console. You can take on each story in any order you wish, or you can go all-in and start with the first part of the quadrilogy and then follow the progress and evolution of your character by importing it into subsequent parts, carrying over not only your character, but also its equipment, stats, and the narrative choices you’ve previously made.


Once you booth up the game, you’ll be able to select from the four different parts directly based on each of the books in the Sorcery! series: The Shamutanti Hills, Kharé, Cityport of Traps, The Seven Serpents, and The Crown of Kings. After selecting the story, you’ll get to select your character. First up, you’ll select between a male or female hero. After this, you can begin your adventure outside of a nearby village. Just press the A button, and you’ll select your character on the map to make your first choice – the first after you try to grab the legendary Crown of Kings in your dreams! 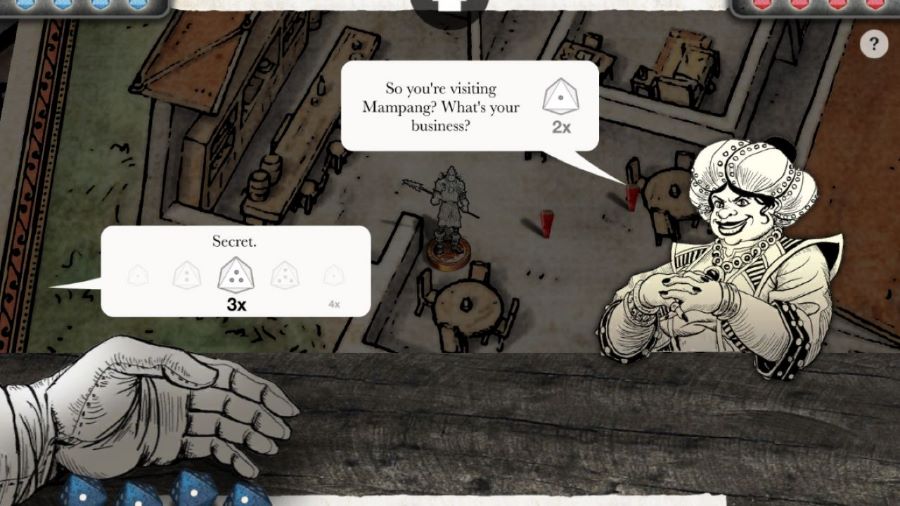 You will be the only one who decides what your story will say. With each choice you make, a new piece of paper with some text will be added to your story. Take, for example, the first sequence you take on after starting to play the first part in the quadrilogy. You’ll have a blade on your hand. You could just decide to go and start your quest, or you could decide to first test your blade to make sure it’s sharp enough for the task. On top of that, before continuing, you can close your eyes and raise a prayer to your Spirit Guide – in my case, a Phanter.


You can start your quest and try to survive with only your blade in your hand, or you could collect your spellbook to be able to cast some spells. Spells are crafted through the alignment of three stars. For instance, to cast the spell ZAP, you must align Zarathustra, Aeugis, and Piini. Simple, right? You can probably figure out what you need to do to cast a spell such as HOT to launch a mighty fireball, or FOF, which will create a forcefield around you, protecting you from harm. There are many more spells to use, so be sure to check the spellbook if you decide to use the power of magic. 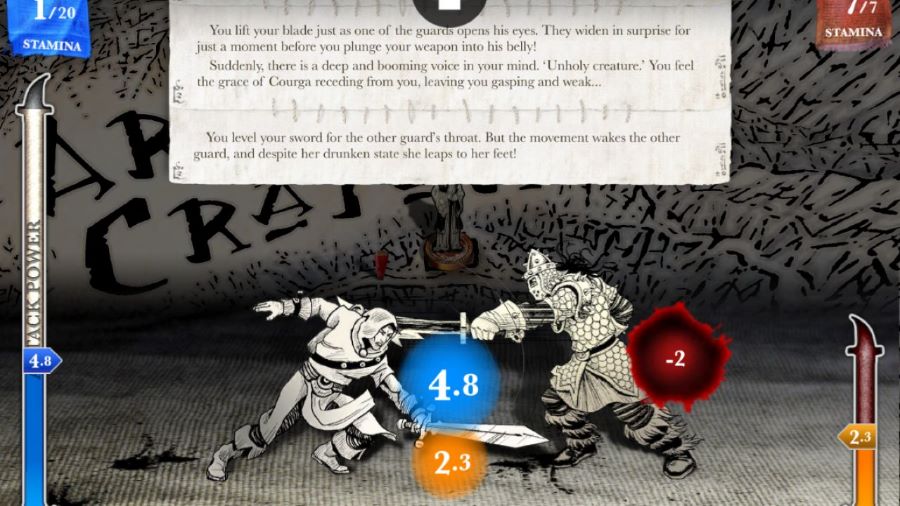 Press the Y button, and you’ll be able to review your inventory. It’s there that you can check your spellbook to learn about all 48 spells in Sorcery! These include spells such as WAL, which creates an invisible wall, BIG, which will increase the size of the caster’s body, WOK, which will transform one gold piece into a metal shield, SIX, which will create multiple images of the caster, or HOW, which is extremely useful in situations in which you need to know what’s the safest way of escaping from a predicament. To cast spells, you’ll have to spend some of your stamina as tribute. Some spells will require that you use a gold coin or items such as a medicinal potion.


Your inventory is also where you’ll see how many rations you have on you (be sure to buy some at the start of your adventure!), the weapons you have on you, as well as any treasure you’ve collected. At the start of part 1, you’ll be given 24 gold pieces by one of the King’s servants so that you can go and find the Crown of Kings. You’ll be able to obtain more gold coins by completing quests, searching locations, or after defeating opponents. You could perhaps defeat a deadly snake, slit it open, and find some gold coins in its belly! 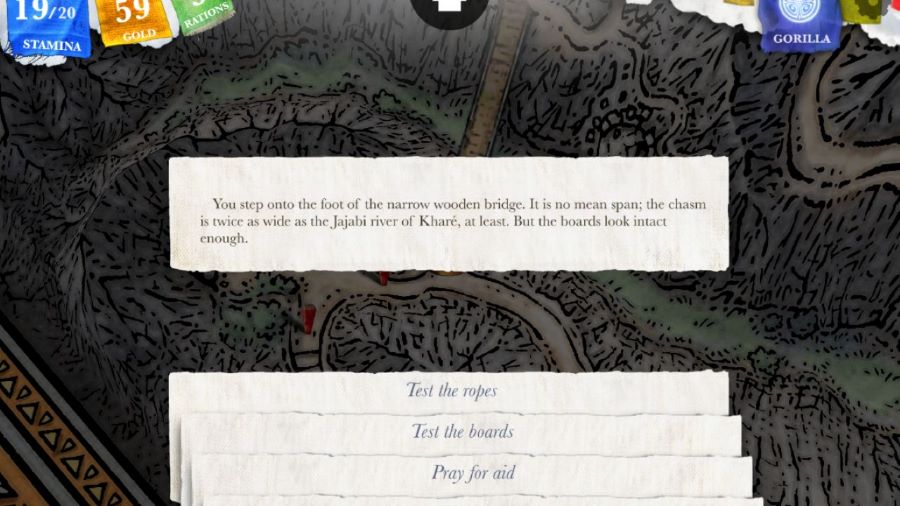 When in combat, you’ll have to select the attack power you’ll use for each attack. You do this by moving the left analog stick, or the D-Pad left and right. If you select zero, then you’ll defend against an incoming attack. From an attack value of 1 and on, you’ll jab, do a sideswipe, cut with your sword, thrust with it, perform a lounge, or unleash a full-on charge attack. If your attack has a higher value than your opponent’s, then you’ll deal damage. Do remember that the higher your attack value, the higher the amount of energy you will use, which will keep you from unleashing a stronger attack later in the fight. Defending will help you recover some of your energy.

As a big fan of the Fighting Fantasy series, I was eagerly looking forward to checking out Steve Jackson’s Sorcery! The Complete Collection. As expected, there’s a lot of content to enjoy in this release since you’re getting four books’ worth of adventures. If you make a mistake along the way, there’s always the option of pressing the L button to rewind your fate and give it another go. You’ll have to learn from your mistakes so that you can improve for subsequent runs as you find out what you’ll be going up against. Steve Jackson’s Sorcery! The Complete Collection is out today on Nintendo Switch with a $24.99 asking price. 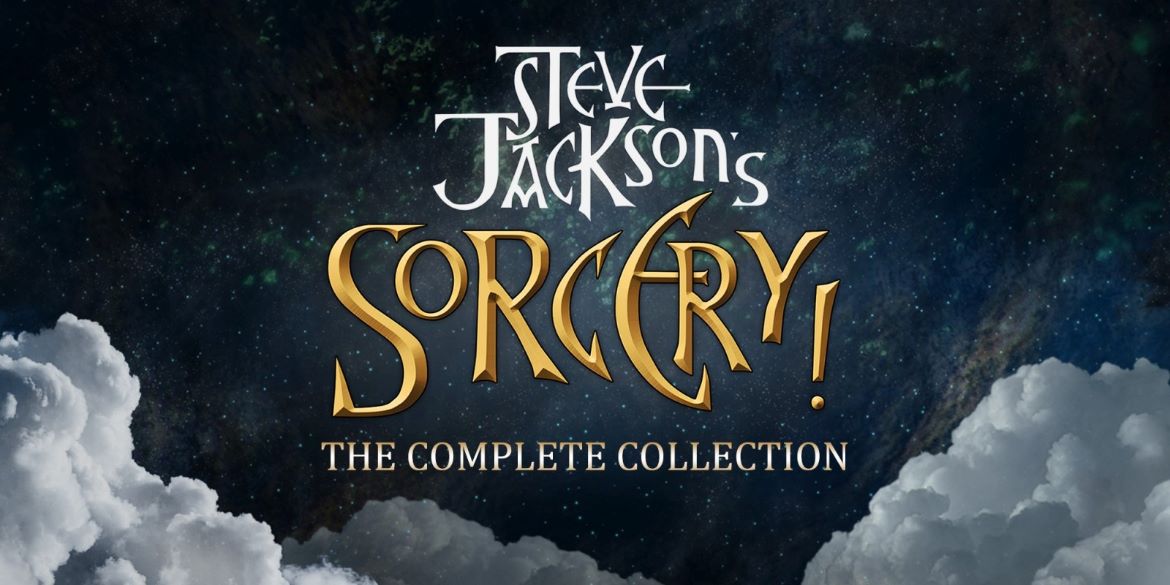 An excellent collection of gamebooks in digital form

Disclaimer
This Steve Jackson’s Sorcery! The Complete Collection review is based on a Nintendo Switch copy provided by No Gravity Games.